New Main Objective: Get your orders from General Tullius

Note! You get this mission during the Reunification of Skyrim main Imperial Legion Quest and it concerns the most important battle in the Imperial Legion campaign, which is to take over Windhelm, the Stormcloaks main city. 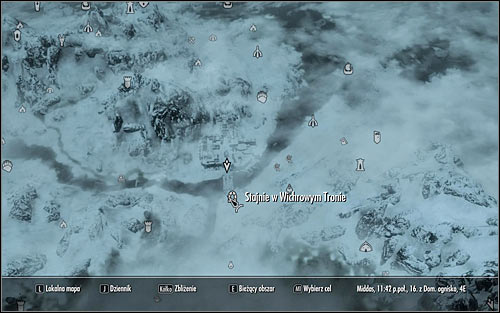 Open the world map and you'll see that Windhelm has been temporarily removed from the list of available locations. Luckily, it doesn't mean that you can't use Fast Travel, because you might as well journey to the Windhelm Stables south of the city (the above screen). If you don't want to use Fast Travel at all, head north to reach the stronghold from the south. 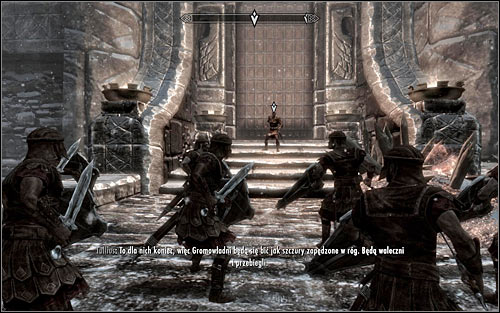 When you get there, go north, toward Windhelm's main gate. After a while you'll see General Tullius and you'll have to wait until he finishes his speech encouraging his soldiers to fight (the above screen). Save the game and only then approach the large gate to commence attack on the city. 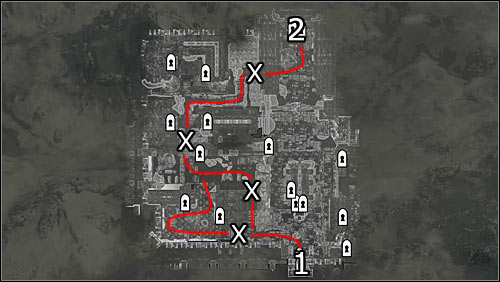 Labels on the map: red lines - free routes; 1 - starting point, 2 - entrance to the Palace of the Kings; X - barricades you can break through.

For starters, a few words on the fights you're about to take part in. This battle rests on quite unusual principles, namely that you can't enter the Palace of the Kings, Ulfric Stormcloak's headquarters, by going north in a straight line. The way to the palace and other parts of the city is blocked by fragments of collapsed buildings or burning barricades, forcing you to follow a predetermined and quite linear path.

It's important to know that you don't have to eliminate all Stormcloak soldiers on the way, because both fighting parties will be replacing their dead warriors pretty regularly. I suggest focusing only on killing those that are a direct threat to you or that stand in your way to other parts of the city. Similarly to other battles, remember not to use area-effect attacks and always pay attention to who you're attacking, because it's difficult to distinguish between the Imperials and the Stormcloaks in the middle of the fighting. 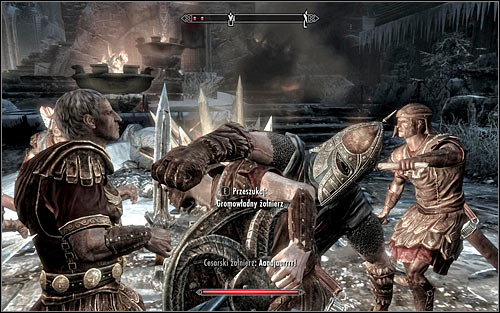 The fights begin as soon as you enter the city (the above screen). If your character prefers close combat, you can start eliminating the Stormcloak soldiers right away. If you prefer ranged combat, you need to get far away from the gate quickly and find a good spot to attack efficiently. As I mentioned before, you can't reach the Palace of the Kings by going north. The streets on the east are also blocked, so the only way is the path leading west. 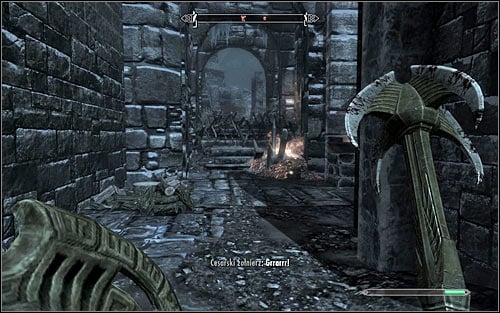 Soon, you should reach a fork in the road (the above screen) and decide which way to go. You can either go west and past a market, or go north and past a cemetery. In both cases, try to destroy the barricades as quickly as you can. It's particularly important if you play a warrior, as he needs to approach every foe to be able to kill him. 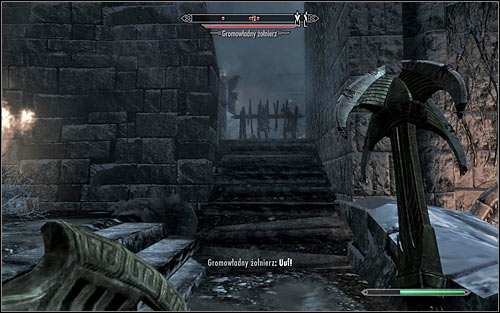 Both ways mentioned above lead to the north passage pictured on the above screen. There is also a barricade to break through here. While exploring the narrow alleys, monitor what the Stormcloak soldiers are doing to avoid being surprised or surrounded by any large group. 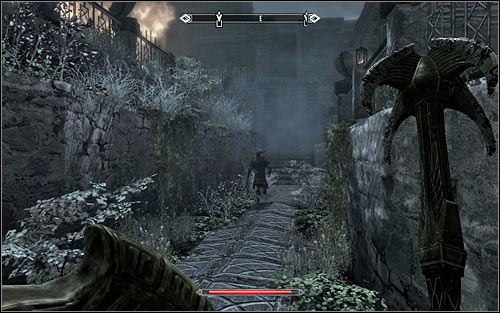 Head north, one by one eliminating soldiers you run into on the way. After a while you'll be forced to turn west (the above screen). 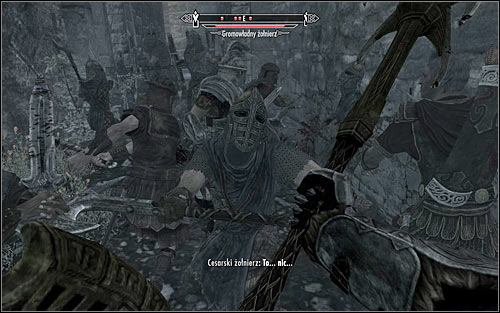 If you have followed my advice, at this point you'll be forced to take care of a group of enemy soldiers gathered around the last barricade (the above screen). Be careful here, because it's easy to hit one of your allies. The barricade itself can be destroyed either during the fight or after it. 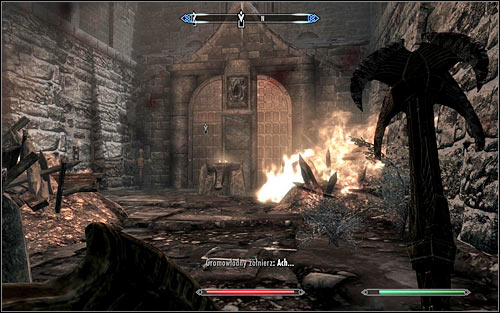 Head west and then turn north. Get rid of the last group of Stormcloak soldiers stationed here, and you gain access to the Palace of the Kings (the above screen). Note - before you enter the palace, save the game, because in a while you'll be meeting the Stormcloaks leader. 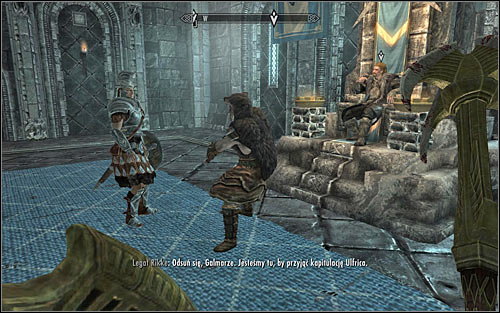 Go to the northern part of the huge hall and stop by the throne with Ulfric on it (the above screen). Don't attack him at once, but wait until his conversation with General Tullius ends. The conversation won't change anything and a result the fight begins. 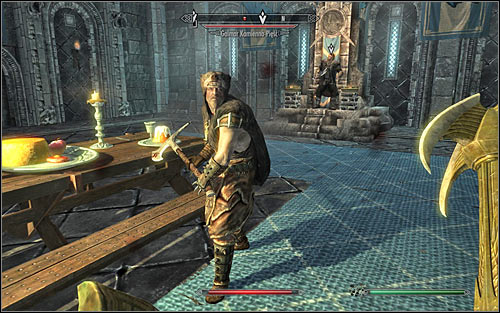 I suggest attacking Ulfric's guard, Galmar Stone-Fist (the above screen), first. This is due to the fact that Galmar can die then and there (once Ulfric's health bar is diminished, he only kneels). Galmar is a highly skilled warrior, so watch out for his powerful strikes, even if you're playing a character of a similar class. 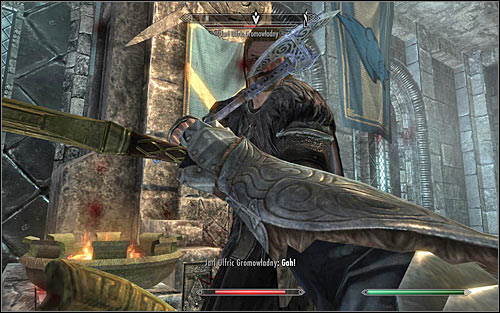 Only when you defeat Galmar, attack Ulfric (the above screen). Interestingly enough, he'll be using Dragon Shouts. Nevertheless, he's less resilient and easier to defeat. 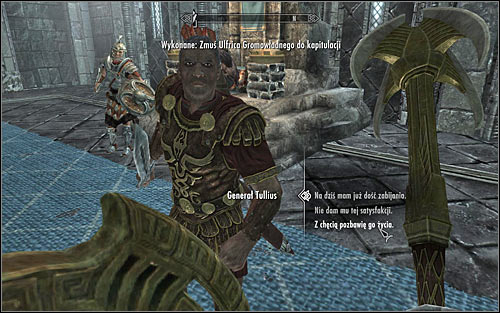 After the fight, listen to another conversation and wait until General Tullius approaches you (the above screen). You need to decide whether you want to finish Ulfric off yourself, or let the General perform this duty. 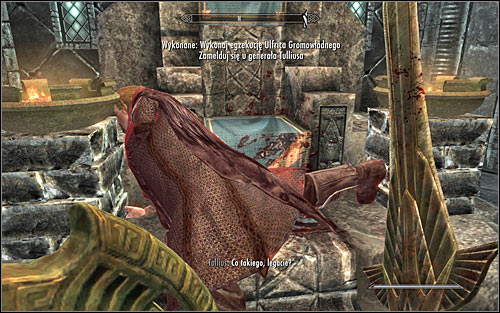 I recommend killing Ulfric yourself, because then Tullius will give you his priced Sword. To execute the Stormcloak leader, you can use either the General's weapon (the above screen) or your own. You can find the summary of the Imperial Legion Quests in the description of the Reunification of Skyrim (main objective: Report to General Tullius #5).