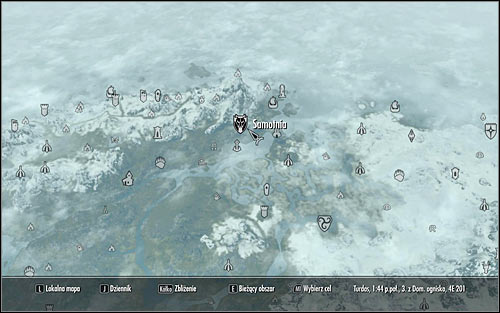 Open the world map and plan a travel to Solitude, located in the north part of Skyrim (the above screen). It's easiest to use Fast Travel, but if you haven't unlocked that location yet, try using a wagon, for example the one on the Whiterun Stables. If this is your first visit in Solitude, you will witness the execution of Roggvir, accused of working for the Stormcloaks. There is no way to affect the execution. 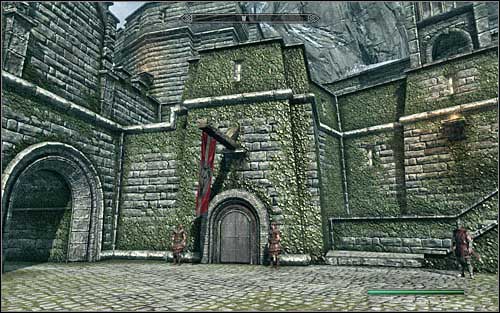 Go to the north part of the city and locate the entrance to Castle Dour, which is guarded by two sentries (the above screen). Fortunately, you don't have to worry about being detained. 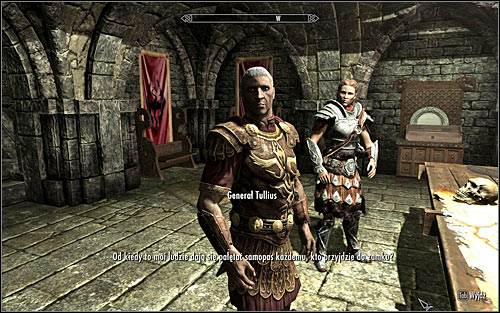 Go to the "war room" where all of the most important persons in the Imperial Legion are gathered. Depending on preferences, you can listen to the conversation about what the Stormcloaks are likely planning, or initiate dialogue with General Tullius (the above screen) at once. If you worked with Hadvar at the beginning of the game, you can mention it now, but it won't affect the outcome of the conversation. Tullius will say that the Imperial Legion could use another warrior who can take care of himself and sends you to Legate Rikke. 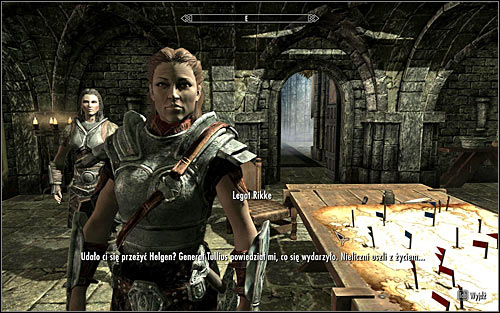 Rikke should also be in the room (the above screen) and you have to talk to her. The woman will let you prove your usefulness for the Imperial Legion. You're given the assignment to secure Fort Hraggstad, which is currently under control of bandits. 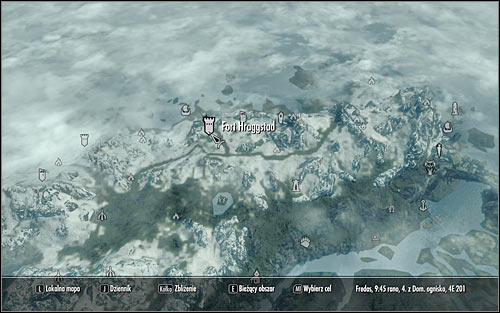 Open the world map and locate Fort Hraggstad (the above screen). It's situated west of Solitude. If you have already unlocked it, it's better to use Fast Travel. If not, I suggest keeping to the hard-surfaced path leading west. After a while, turn north and then again west, eventually reaching the surroundings of the fort. 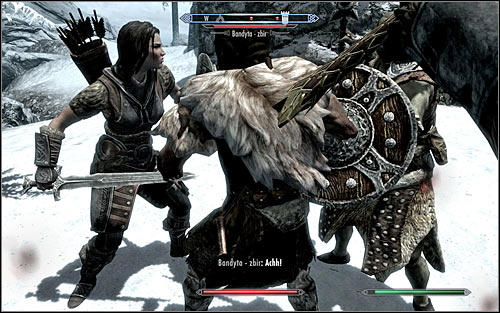 The fort is occupied by weakly trained bandits, but nevertheless it's worth to adjust your tactic to the chosen playing style. If you character is a warrior, you don't need to overthink it and can head towards the main fort entrance (the above screen). 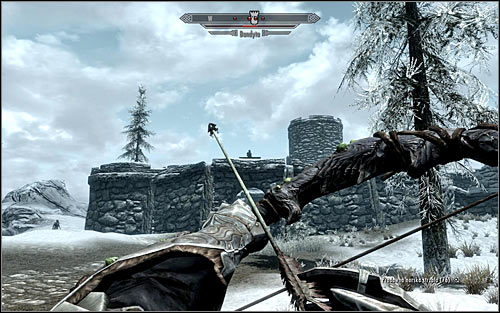 If your character is an archer or a mage, then it's better to attack the foes from a distance, and I suggest taking care of archers on the upper walls first (the above screen). Naturally, if you play a warrior you also shouldn't ignore the archers, and, depending on preferences, you can for example try and hurl the Unrelenting Force Dragon Shout at them, or climb the wall and take them out in close combat. 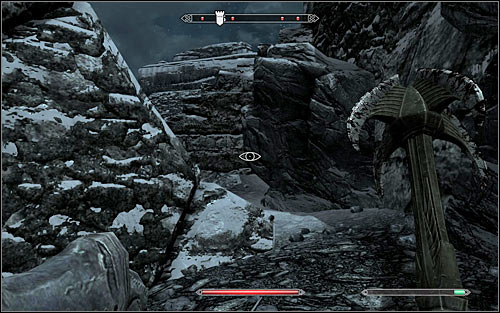 You might as well surprise your opponents. In such case, I strongly recommend going around the whole fort to get to the north part of the wall, where you'll find a large hole (the above screen). Of course, it's advisable to do this under the cover of the night, because then the visibility of the foes is significantly limited. 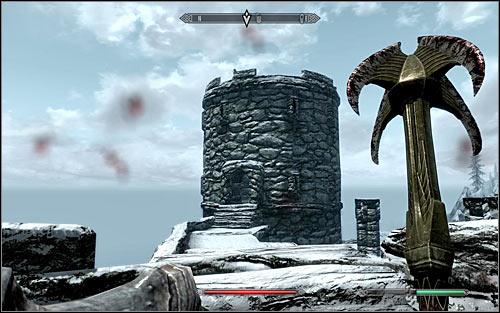 Try to clear out the main courtyard first. Afterwards, check the two big towers, as there should be additional archers there (the above screen). I suggest using the Unrelenting Force Dragon Shout again, or other ability that can hurl enemies away, so you don't have to fight them for too long. 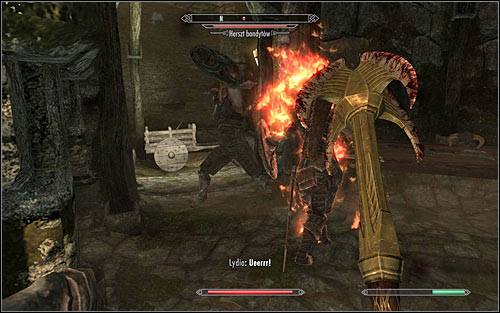 Finally, check the two locations with doors. In one of the main rooms of Fort Hraggstad you'll probably meet the Bandit Chief (the above screen) and you have to be careful, because he's much stronger than a standard opponent. I also recommend raising your resistance to fire before engaging him, because he'll most likely use a weapon that inflicts fire damage. 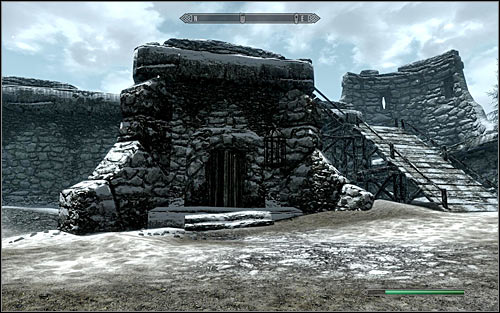 The other location that you need to secure is the Fort Hraggstad Prison (the above screen). Most likely, there will be three weak bandits to slay there. Fight until all of them have been eliminated. Luckily, if you miss some bandits in one part of the fort, the game should automatically point you to their current location, making it easy for you to complete the Legion's assignment. 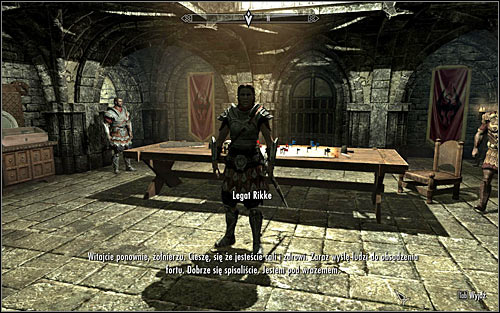 Open the world map and go to Solitude. Naturally, you have to get back to Castle Dour. Once there, you can listen to a new conversation or talk straight to Legate Rikke to report the completion of the assignment (the above screen). She will tell you to speak to General Tullius so that you can take the oath and officially join the Imperial Legion. Note - taking the oath is not tantamount to allying yourself with the Legion irreversibly; you will still have some time to change your ally. 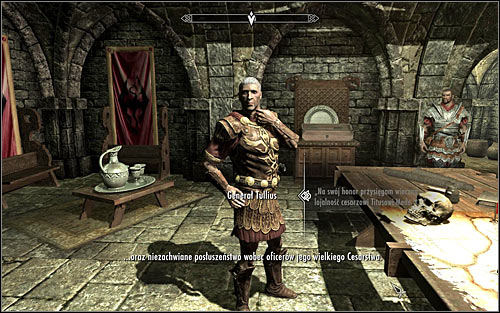 This objective is very easy to complete. Approach General Tullius and, once the dialogue begins, repeat parts of the oath after him (the above screen), clicking one by one on the only lines available. Afterwards, the general officially welcomes you to the Legion. He will also mention that you can get gear from Beirand the blacksmith, and that Legate Rikke has something to discuss with you. 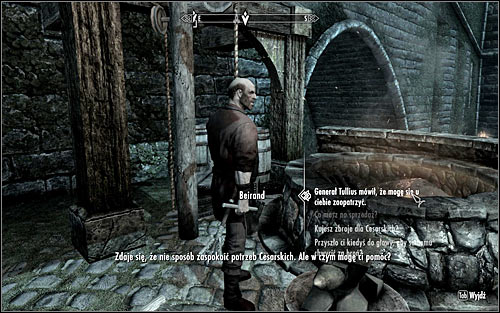 I would suggest going to Beirand at once and getting your due gear without delay. Leave Castle Dour and go to the marked location. You should find Beirand the blacksmith outside his house (the above screen). Initiate dialogue and say that you were sent by General Tullius. The blacksmith will allow you to choose one of three sets of items:

Personally, I recommend choosing elements of light or medium sets, but naturally, it should reflect your own personal playing style. It's worth mentioning that using Imperial gear is not mandatory, however if you have started the Civil War quests in the early stages of the game, it's likely you wouldn't have any better outfit for your character. Now you can concentrate on the next Imperial Legion Quest - The Jagged Crown.