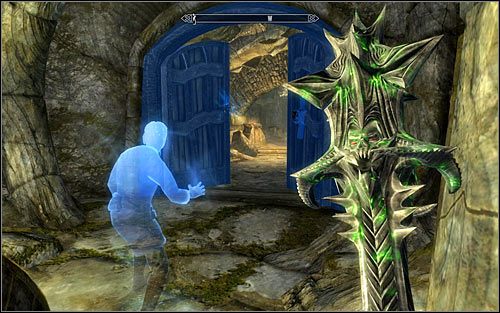 Head back through the same rooms, though be careful as inside one of the rooms you will be attacked by new Draugrs. Stop after reaching the previously ignored sealed door and wait for the ghost of Svaknir to unlock them (screen above). I'd of course recommend using the newly unlocked western passage. 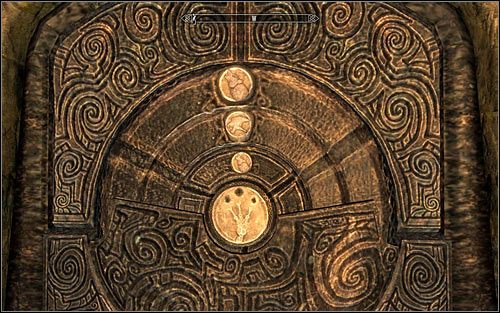 Approach the next locked gate, where you will have to solve a symbols puzzle. The whole thing consists of setting three interactive rings in the correct order. Open your inventory, head to Misc and take a look at the Ruby Dragon Claw that you obtained at the beginning of this quest to learn the order. The full solution can be seen in the above screenshot - the upper ring has to show a wolf, the middle a hawk and the lower a wolf. In the end use the claw to unlock the passage. 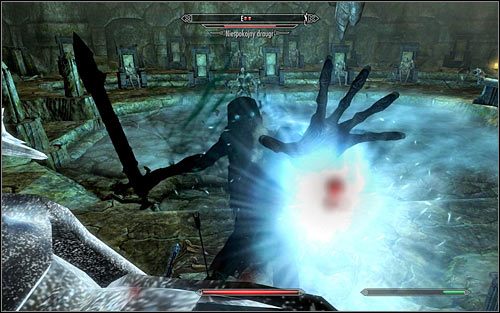 Head south and save your game on your way. After reaching a big southern room you will have to take part in a long fight with Draugrs, consisting of a few parts. Start attacking the undead who stand up from their thrones (screen above) and note that the ghost of Svaknir is helping you. What's more, he cannot die. Be careful, as with time you will have to face increasingly strong Draugrs, including four Draugr Scourges. 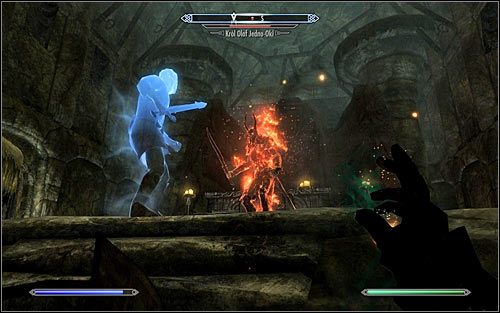 In the end you will have to fight the main boss of this quest - King Olaf One-Eye (screen above). Attack him before he can even raise from his grave and in the further part of the battle back out and let Olaf fight with Svaknir. You could of course join in, though you most of all have to focus on avoiding the boss' attacks. Afterwards examine his corpse and take King Olaf's Treasury Key. Apart from that you should also check the nearby Word Wall to learn the Word of Power - Fury, Whirlwind Sprint. 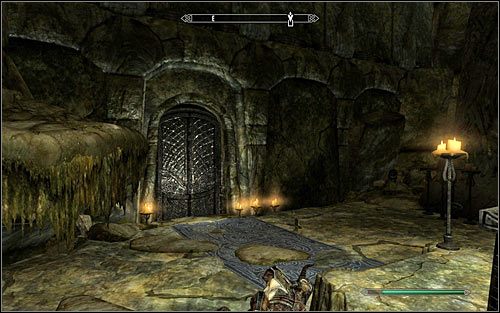 Use the side door, opening them with the key (screen above). Inside the treasury, be sure to check the content of the main chest. Afterwards pull the lever and follow the narrow corridor thanks to which you will easily return to the crypt exit. Open the world map and travel to Solitude, or rather The Bards College. Speak to Viarmo and give him King Olaf's Verse. 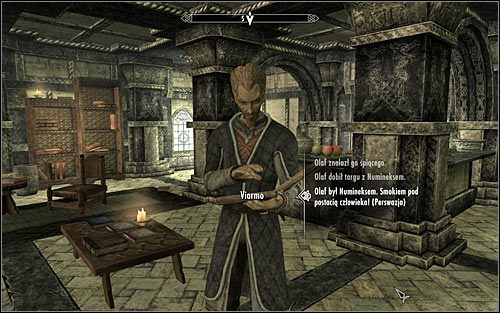 As you speak with Viarmo, it will turn out that the verse isn't complete and your hero will automatically suggest using a trick, or rather falsifying it. The Headmaster will start reading the verse and ask you twice how he should fill it up (screen above). I'd definitely suggest choosing the dialogue options connected with Speech (Persuasion). Luckily if these attempt don't succeed, you will still be able to use the "standard" dialogue options. 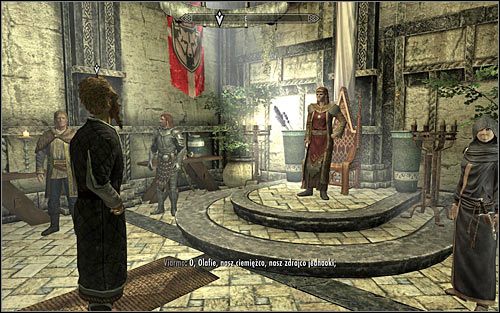 Having finished the verse, Viarmo will decide to take it to The Blue Palace and read it to the Jarl, trying to convince him to return to the tradition of the Burning of King Olaf. The Blue Palace can be found in the south-east part of Solitude and you can follow Viarmo or meet him there. Find him and ask him if he's ready. Follow the headmaster into the main hall and wait for Viarmo to start reading the verse (screen above). Regardless of your choice regarding the gaps, the Jarl of Solitude will be delighted and decide to restore the Bard feast. 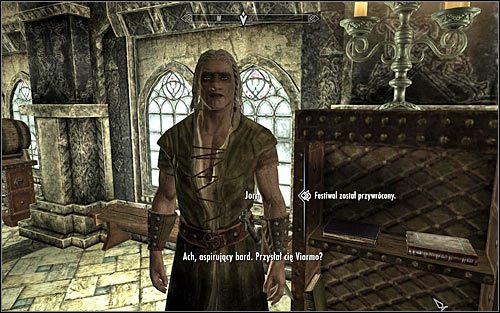 Speak to Viarmo and he will send you to Jorn, so that he starts preparation for the feast. Head out of The Blue Palace and return to The Bards College. Find Jorn and speak to him (screen above). If you meet with him after dusk, you will be able to advance to the next part of the quest automatically. Otherwise Jorn will ask you to come back to him later. 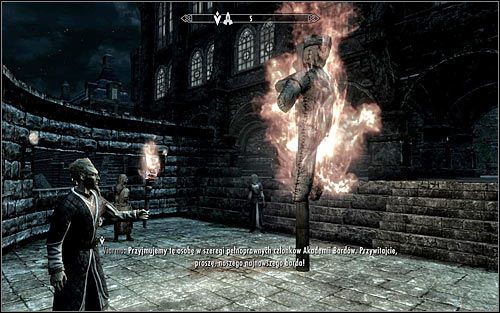 Head out of The Bards College and turn right, going north-east. Stop by the small square and wait for all the interested to gather and watch the dummy King Olaf get burned (screen above). In the end you will speak with Viarmo, who will officially make you a member of the College and reward you in gold (the prize depends on the "quality" of the verse, i.e. how many Persuasion dialogue options you were able to use). Despite the mission coming to an end, you can now take care of completing three other quests of The Bards College, described in the further part of this guide.