On this page of our guide to The Elder Scrolls V: Skyrim we have prepared a detailed description of A Scroll For Anska side quest. You have to explore the High Gate Ruins - talk with Anska, explore the dungeon and duel with Vokun. You will encounter many monsters (like Draugrs) along your way. Also, you will have to solve a puzzle.

{ramkaczarwona}Notice! This quest is connected with Dragon Priests Masks, so it's best to complete it while obtaining one of the eight masks needed for the collection.{/ramkaczarwona} 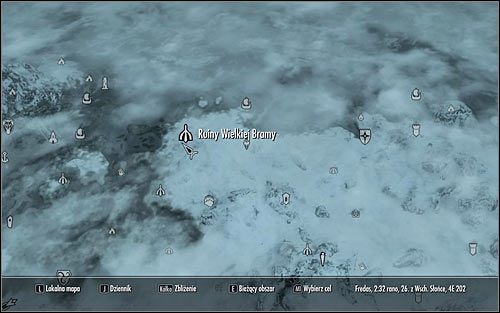 Open the world map and head to the High Gate Ruins in the northern part of Skyrim (screen above). If you haven't yet discovered that location, it would be best to start at Dawnstar and head west. After getting there, enter the ruins and find Anska in one of the first rooms. Speak to her to learn that she has found the crypt of the Dragon Priest Vokun and she's looking for a certain scroll. It's of course worth to offer your help, especially that Anska will join your party as an independent ally (you don't have to give up on your current companion). 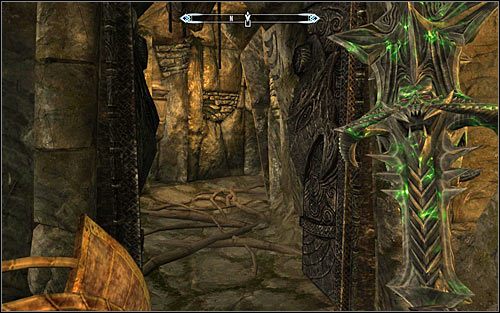 Begin the exploration, being ready for a long and tiresome journey. On your way you will regularly come across Draugrs and unfortunately in most cases it will be their strongest kinds, i.e. Draugr Wights, Draugr Scourges and Draugr Deathlords. Adapt your strategy depending on whether you're fighting a warrior, archer, or mage. After reaching the bigger room go up the stairs and through the passage in the north-east corner (screen above). 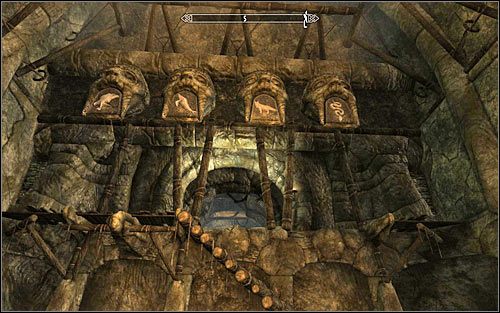 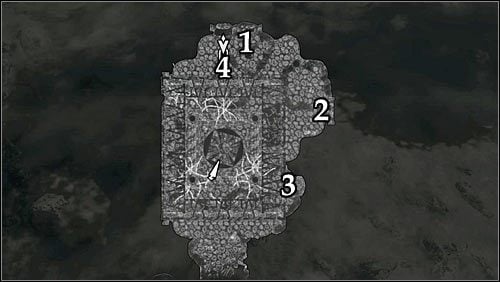 Keep fighting your way through the Draugrs until you reach a bigger room in which you will have to solve a rather easy puzzle. Examine the southern the southern part of the ceiling and you should note the four symbols from the screen above. They suggest the proper order in which you have to pull the levers in this room. Start off by pulling the one with the hawk symbol, afterwards the fish, wolf and in the end the snake lever. The location of the levers have been marked in the map above (two first levers are on the upper level and two last on the lower). 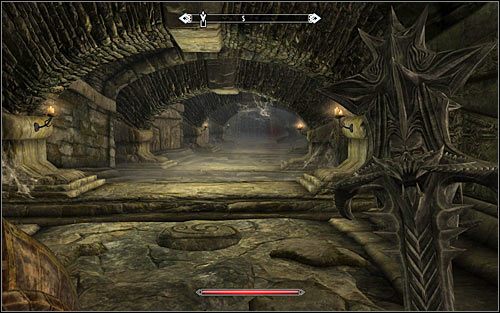 Solve the puzzle and use the newly unlocked stairs in the middle of the room to reach the door leading to High Gate Ruins Catacombs. Here you will have to fight more Draugrs and you should especially look out for the "sleeping" ones, no letting them attack you from behind. Go down the next set of stairs onto the lower level and continue exploring the catacombs. Be careful while going through the southern corridor (screen above), as the area is full of traps activated by standing on a pressure plate. 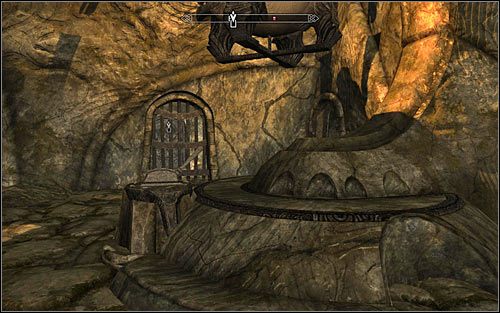 Eventually you should reach a small room with a lever (screen above). Pull it to open the side room and freeing a Draugr. Get rid of this monster and examine the room for another lever. Interacting with it will open the neighbouring room. Deal with the Draugr Scourge Lord and pull the third and last lever. Follow the newly unlocked eastern passage and open the door to Vokun's Throne Room. Save your game, as you will have to fight a boss. 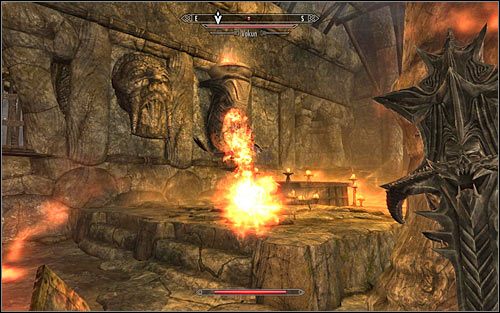 Head east and fight Vokun, a boss - Dragon Priest (shown in the above screenshot). Look out for his powerful magic attack and keep an eye on Anska, not letting her end up in the centre of the boss' attention. After the battle examine the remains of the Priest and take Vokun Mask, needed for another side quest mentioned before. 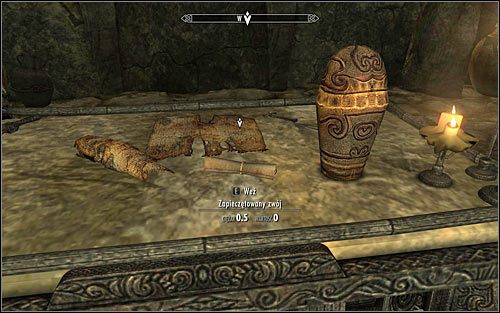 Use any set of stairs to reach the eastern room. Find the Sealed Scroll (screen above), take it and return to Anska. The woman will reward you with the Spell Tome: Conjure Flaming Familiar, though you should still take a look around the area to find a chest and a Word Wall with the Word of Power - Wrath, Storm Call. You can easily leave the throne room by following to corridor going north.