On this page of our guide to TES V: Skyrim we have prepared a detailed walkthrough of the Missing in Action side quest. You have to find evidence of Thorald's fate. During your investigation (which offers some minor choices), you will find out that the boy has been imprisoned by Thalmors. You will have to set him free and then escort him to safety.

This mission can be activated in one of two ways. If during your visit to the Whiterun marketplace you speak with the old lady (Fralia Gray-Mane), arguing with two men, you will learn of the tragic faith of her lost son. If you agree to help her, she will ask you to her house to tell you more about the case. 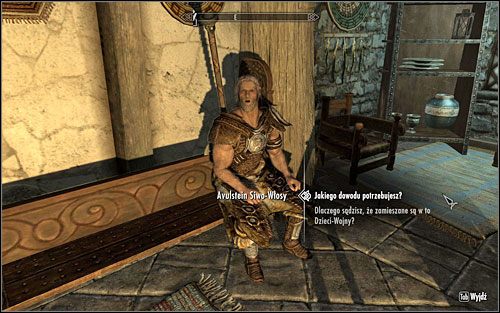 If you haven't met with Fralia and would want to take on this mission, you can head straight to her house and there speak with the grey-haired man (he will greet you with curses and axe waving). After he calms down, you will learn that Thorald has been opposing the imperial authority and that's why he was kidnapped. Your objective will be finding out what exactly happened with Thorald Gray-Mane. You should begin with the clan's biggest enemy, the Battle-Born.

After speaking with Avulstein Gray-Mane, you will be directed to the House of Clan Battle-Born in Whiterun (neighbouring building). You can obtain the necessary information in a few ways. If you're familiar with the art of theft, you can break into the house and steal the Imperial Missive from the room on the left. If you're disgusted by theft, you can persuade Idolaf Battle-Born to tell you everything he knows (Persuasion). 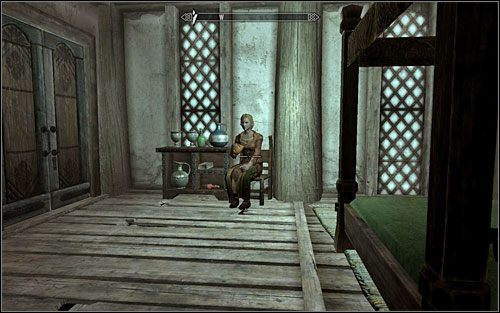 If that wouldn't meet your expectation as well, you can steal a key to the room with the Imperial Missive from any of the inhabitants and take the note. Eventually, if you don't have anything against blackmail, you can steal the compromising love letters from Jon. After obtaining them, threat any of them to reveal the correspondence and the Battle-Born will bring you the document you're looking for themselves.

Look through the documents taken from the House of Clan Battle-Born to learn that Thorald had been kidnapped by General Tullius and that he's being kept at the Northwatch Keep. The Gray-Mane will be certainly interested with this information, so give them the evidence you found. 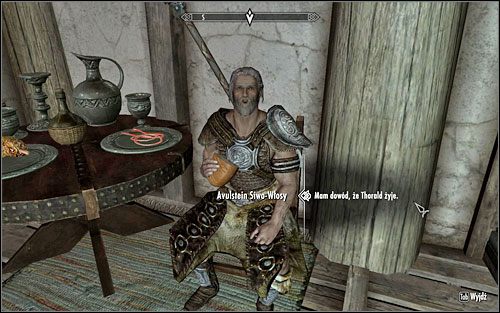 Bring the Imperial Missive to Avulstein Gray-Mane and he will tell you that the situation is worse than he has thought. Apparently the Thalmor have caught Thorald and are keeping him in an old imperial stronghold. Your interlocutor is however determined to free his brother - he will do anything to complete this task. At this point you can agree to accompany him in his attack on the Northwatch Keep (Avulstein will join your party) or state that you will do it alone. Regardless of the method, you're in for a hard time with Elves.

Theoretically there are two ways of completing this mission: you can declare an all-out war against the Elves (taking Avulstein with you) or decide on a more subtle option of quietly sneaking into the keep. In reality the second plan has no way of succeeding - as only you rescue Thorald, the guards throughout the keep will be alerted and you will need to fight them. In such situation the optimum solution is heading out with Avulstein and showing the Thalmor hell on earth. 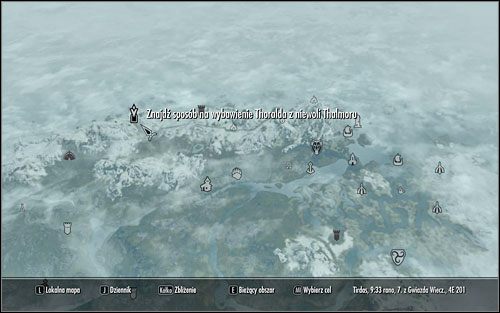 The Northwatch Keep can be found at a very remote part of Skyrim. In order to get there, you will need to head to Solitude and afterwards go north-west (expect lots of wild animals and Bandits on your way). 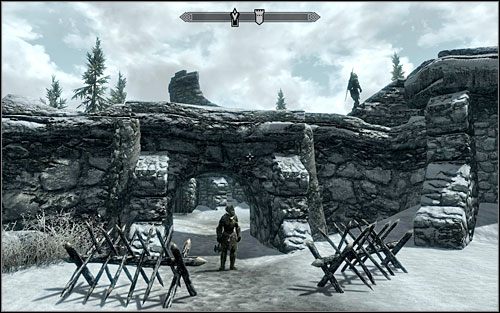 Sneaking into the stronghold is very hard, or even impossible. Solving the whole case peacefully is out of reach as well, as the Thalmor cannot be convinced to your right in any way. Therefore it's best to just attack the keep - it's guarded by only seven Elves, so if you lure them out and kill one after another, you shouldn't have too many problems (especially with help from Avulstein). Massacre them, enter the keep and start looking for Thorald.

Expect strong Thalmor resistance inside the keep. There's about a dozen of them here, including three mages. Try exploring this area step by step, without going too far too fast - otherwise you might get flooded by enemies. I'd suggest using skills typical for thieves, such as Sneak and Archery - the element of surprise pays a big role in the beginning. 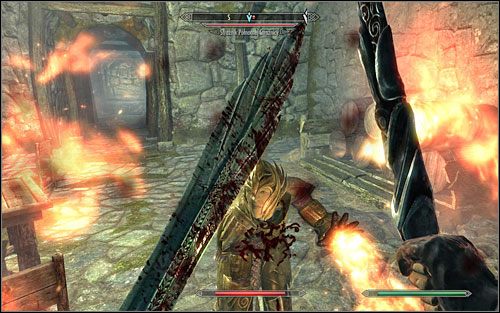 As you enter the large, two-story area, head to the small room on the left - the guards captain quarters. Apart from the leader himself, you will also find a couple useful items and The Legendary City of Sancre Tor which can boost your Two-Handed skill. As for the captain himself, in his inventory you can find a key which can come in handy during further exploration. 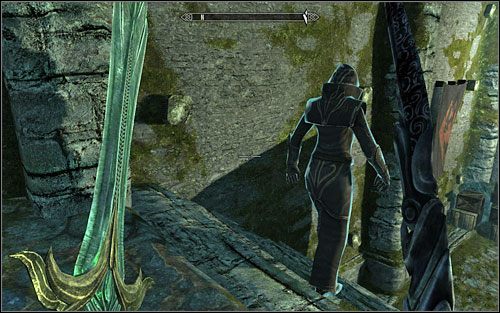 Head onto the upper floor and to the cells. Kill the Interrogator and Guard and go meet with Thorald (left corridor). Tell him that you're here to rescue him and free him of his shackles.

After rescuing the man, you can return following the same path that you used to get here or choose the shorter one through the cells. However be ready that by choosing the second option you will have to defeat two more Elves. 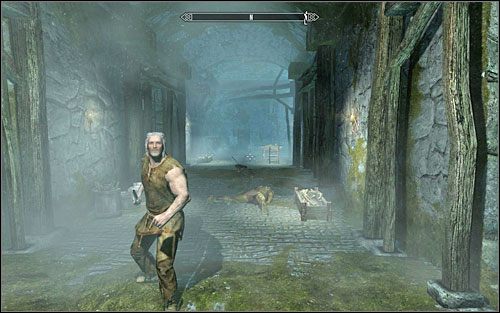 After getting Thorald out, lead him to a safe area (if you have killed everyone, the keep will turn out to be such a place). Afterwards speak with the would-be convict.

After reaching a safe area, you can speak to Thorald. He will thank you for freeing him and ask whose orders were you following (only if you didn't bring Avulstein along - otherwise it will be clear). After a short conversation, the man will ask you one final favour - you should return to Whiterun and give Fralia a coded message. The old woman will know what it's about. 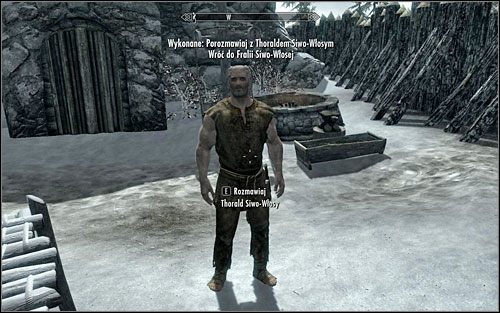 Thorald will run to Windhelm to join the Stormcloaks there - the same fate awaits Avulstein. Skyrim has apparently ceased being a good place for true Nords.

Head back to Whiterun and meet with Fralia - you should be able to find her at the marketplace or her house. Tell the woman that you saved her son and she will demand proof. Tell her the words that he told you to ensure the old woman of his safety. Delighted with your heroic deed, she will reward you with an enchanted steel weapon or considerable amount of gold. The quest will end and you can head out onto more adventures. 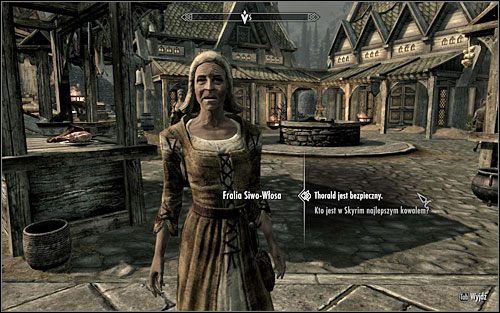