On this page of our guide to The Elder Scrolls V: Skyrim we have prepared a detailed description of The Lost Expedition side quest. You have to search for lost expedition members at Nchuand-Zel excavation site near Markarth. During your exploration you will have to find logs and defeat many monsters. There will be a mini-boss among them, a giant spider called Nimhe. 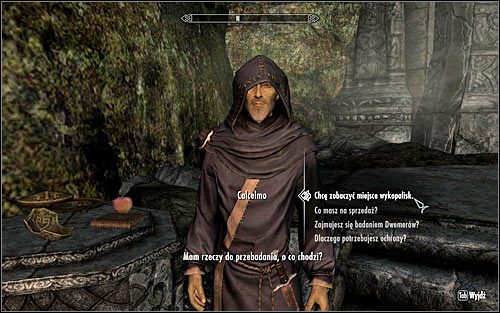 Head to Understone Keep in Markarth (if you haven't been to the Keep yet, you can find the entrance by going west after entering Markarth). The location in which you activate this quest is Nchuand-Zel excavation site and you can get there in three ways. The best way is finding the mage Calcelmo (screen above) and speaking to him about heading to the excavation. Calcelmo will decide to let you in and give you the Key to Nchuand-Zel, but only if you agree to kill the giant spider living in the ruins (Miscellaneous: Kill Nimhe inside Nchuand-Zel). 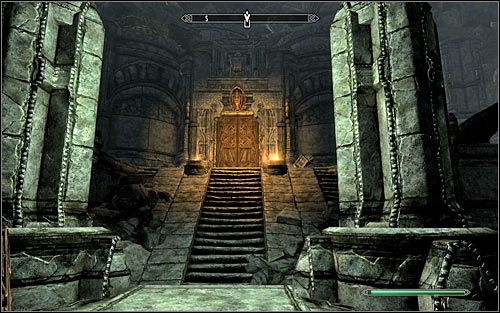 The less obvious solutions are breaking into the excavation by using lockpicks or stealing the mentioned key from Calcelmo. Personally I wouldn't recommend such option, as eliminating the spider will prove necessary either way. Regardless of the chosen option, find the door to the Nchuand-Zel excavation site (screen above), located in the southern part of Understone Keep. 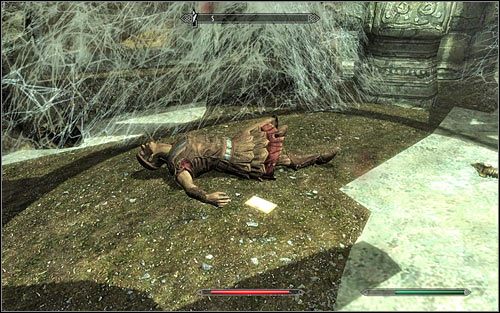 Start exploring the excavation site. Your objective is reaching the its south-west part. Kill the lesser Frostbite Spider that you come across and destroy the spider-webs with any weapon or spells. Inside the main room you will need to fight the biggest spider who Calcelmo mentioned, Nimhe. Depending on your preferred fighting style, you can attack the spider from the narrow corridor or fight him directly. After the battle, climb onto the upper ledge and find the corpse of Alethius (screen above) to pick up Alethius' Note and officially activate this quest. 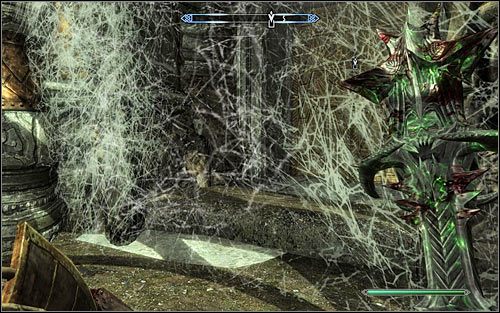 Stay where you found Alethius and use any weapon or spells to cut through the spider-webs (screen above). Note that therefore you gained access to the door leading to the main area of Nchuand-Zel. It's somewhat of a hub, so you will visit this location multiple times. For now head south, staying on the wide bridge and eliminating the Falmers you come across on your way. I'd especially suggest looking out for the archers and mages, trying to eliminate them in the first place. 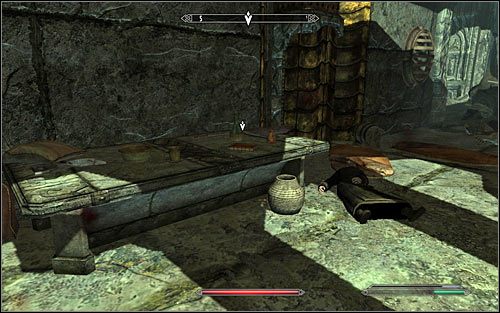 Eventually you should reach the marked door in the south-east part of the cave, leading to Nchuand-Zel Quarters. Some more demanding fights with Falmers await you here. Head south-west, as in order to reach the second journal you will need to first locate the stairs leading onto the lower level. Head east only afterwards. Stromm's Journal is lying on the table (screen above) and will be of course guarded by a couple monsters. 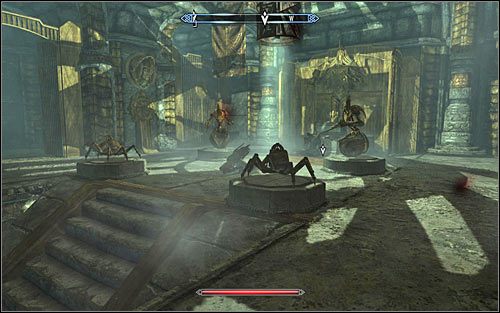 Return to the starting point, i.e. the door leading to the main area of Nchuand-Zel. After reaching the large cave, CAREFULLY head to the very bottom and locate a door leading to Nchuand-Zul Armory in its western part. Inside the new area head west, looking out not only for Falmers, but also a quite dangerous fire trap. Erj's Journal can be found surrounded by dwarven machinery (screen above), though you don't have to worry about the Spiders and Spheres activating. 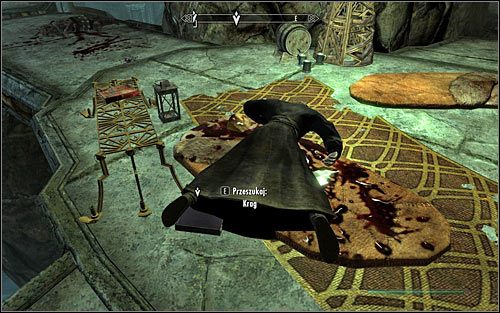 Head to the previously ignored exit from the Armory. For that you need to return to the branching in the northern part of the location and choose the path leading east. Open the large gate to return to the main area of Nchuand-Zel. You luckily don't have to search any further, as Krag's body is just beside (screen above). Most of all, you should of course take Krag's Journal. 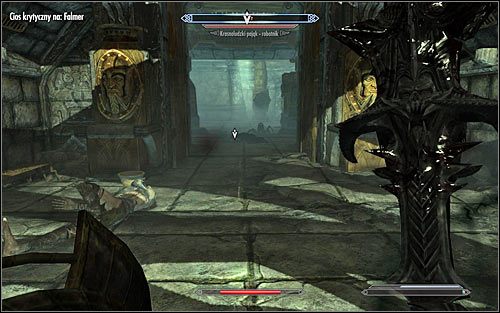 Only one journal remains to be found. In order to reach it, you have to head north and find a door leading to Nchuand-Zel Control in the north-west part of the cave. Follow the only possible path, successively eliminating the Falmers that you come across. With time you will also start coming across Dwarven Spiders, though you don't need to change your tactic with them too much. Find Staub's corpse (screen above) and pick up Staub's journal lying beside him. 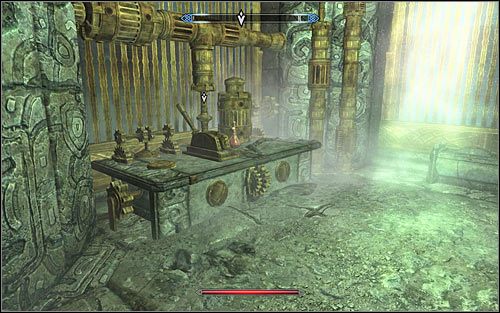 Head south, eliminating more Spider on your way. Be careful as you fight the Spider Guardians, as they're capable of shocking their targets with electricity. With time, Dwarven Spheres will join the fights. It's good to keep them at distance, as they specialize in direct combat. Eventually you should reach a lever which you have to pull (screen above) to activate the dwarven defence systems.

New main objective: Find someone who knows about the expedition 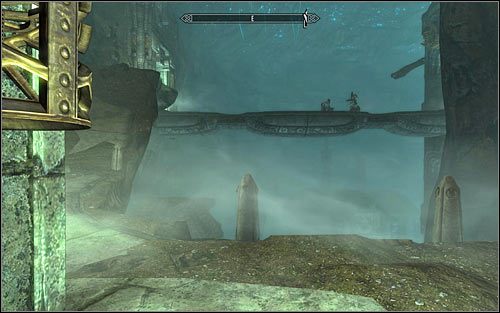 Now you need to return to the Understone Keep. Start off by heading back to the starting point of the control room you're currently in, i.e. the door leading to the main part of Nchuand-Zel. After getting there (screen above), it would be best to ignore the fights that are taking place in the area and choose the left ramp, thanks to which you can easily jump down onto the previously examined platform, thanks to which you won't have to go through all the rooms all over again. 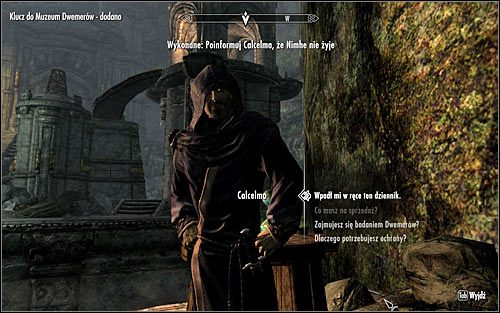 Head towards the gate leading to the Nchuand-Zel excavation site, eliminating the Falmers and Dwarven Spiders that you come across if needed. Now you need to head through the whole excavation, though you shouldn't meet any new enemies here. After getting back to Understone Keep, find Calcelmo. Start off by informing him of killing the spider Nimhe to receive the Dwemer Museum Key. It's however more important to tell him of the recovered journals (screen above). In this case you should receive 1250 gold and the quest itself will end. Notice - if for any reason you missed some journals during the exploration of Nchuand-Zel, you can return for them anytime you want, though it will also mean having to deal with the activated dwarven automatons.