On this page of our guide to The Elder Scrolls V: Skyrim you will find a detailed description of Laid to Rest side quest. Visit Morthal to start this quest. At the initial stage of this task you have to investigate a fire which occurred at one of the houses. Later, you will have to fight with vampires and their leader - Movarth.

As you visit Morthal for the first time, you will probably see a small group of people discussing something fiercely. If you approach them, you will learn that the cause is a fire in which a woman and her child died. Visit the Moorside Inn and speak with the bartender about recent events. She will tell you that Hroggar is suspected of setting fire to his own house, with his wife and child inside. Suspicions started after he has moved to a beautiful woman named Alva only one day after the catastrophe. The quest will activate at this moment. 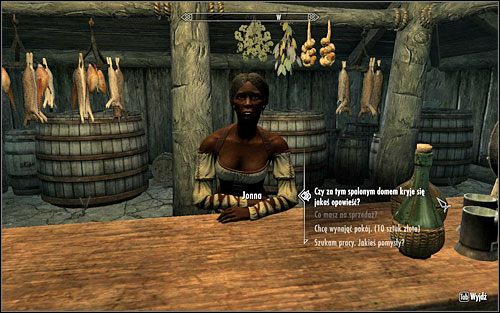 None of the citizens has any evidence that Hroggar and Alva are responsible for setting the fire and therefore murdering the inhabitants. The whole case is very mysterious and many people think that the burned place is cursed. The Jarl of Morthal will certainly be grateful to anyone who can bring peace back to the city.

Head out of the inn and to the Highmoon Hall (directly opposite). As you enter, you're in for a surprise - the Jarl of Morthal turns out to be a woman - Idgrod Ravencrone. Speak to her to learn that she's very concerned with the fire and the death of two innocent people. Of course all the citizens are suspecting Groggar, but the man cannot be sentenced based only on traces. 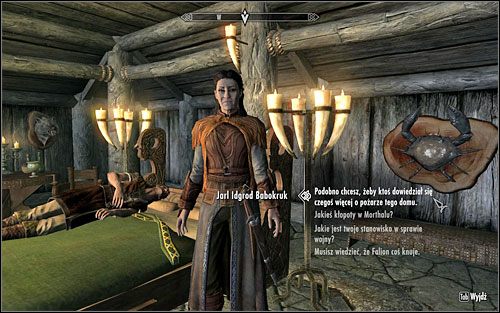 Your role starts here - as none of the citizens wants to approach the ruins because of the supposed curse, only you can go there and look for clues. If you manage to prove Hroggar's guilt or innocence, the Jarl will reward you.

Head to the site of the fire and investigate it. It can be found right behind the Jarl's house, so you should have problems with locating it. As you reach it, it will turn out that the house is indeed hunted, though not by a monster but Hroggar's daughter - Helgi. 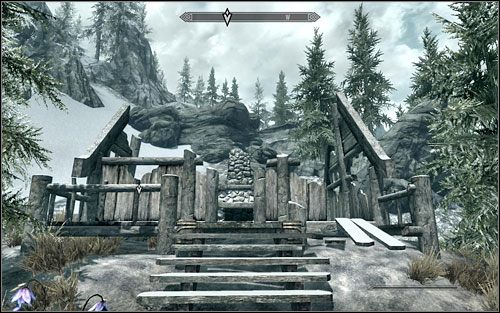 Speak with the cursed girl to learn that she doesn't fully realize she's dead. Questioning her might be quite difficult, as classical methods of persuasion don't seem to work. If you decide to play hide and seek with her, she will agree to help you. Before the ghost disappear, you will learn that you need to wait until the night comes, as only then the "second one" (whoever that is) will appear. If it's not dark already, press T and wait until 8PM.

Turn west and head out of town. The location you're heading to isn't marked on the map, though finding it should be too difficult, as it's a cemetery between a heap of rocks south of town. In case you can't find it, you can always speak to the Jarl who will tell you where to look for it (a proper marker will appear on the map). 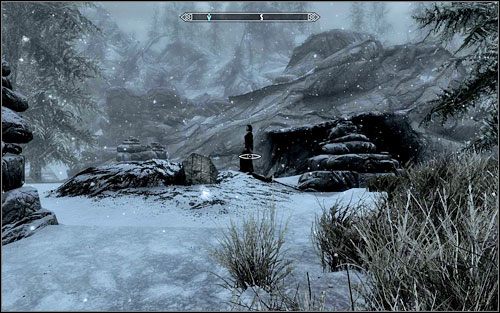 After getting there, you will see a dark woman standing above a small, childish coffin. Come closer and you should note that she's a vampire called Laelette. The monster will just at you, so know no mercy and slay her. After killing her, approach the coffin and speak to Helgi who's inside. The girl will tell you that Laelette planned on reviving her as a vampire and her "prize". Now her soul can peacefully head of the dead.

With the vampire lying dead, her husband - Thonnir - will appear. Seeing that she has become a monster, he will break down. The muscular Nord thought that she had run away to the Stormcloaks, but apparently her faith was clearly different. 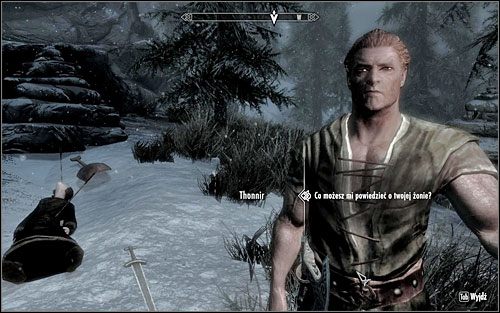 Before her unexpected disappearance, Laelette met with Alva, who she used to hate. It might suggest that Hroggar's new lover is behind her transformation. Suggest it to Thonirr and he will definitely rule out such a possibility. Are all men in Morthal under the control of the beautiful Alva?

If you break into her house during the day, you won't come across Hroggar, therefore it's a much better option. In case you don't want to waste picklocks, you can always steal the key from Alva's lover, as he walks through town. What's interesting, you can tell him of the faith of his daughter and your suspicions towards his new lover and he will ignore it completely. Apparently the woman is a very powerful witch, or a skilled seducer. 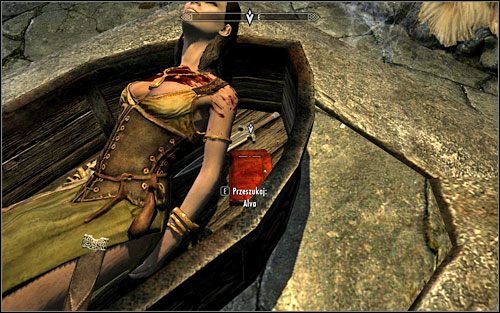 Enter the house and head to the basement. If it's daytime, inside the coffin in the middle of the room you will find a sleeping Alva (she walks through town during the night). You don't need any more proof for her vampirism - kill the woman before she attack you. Afterwards take her Journal from the coffin - it's the proof that you should bring to the Jarl. If you give her the evidence without killing Alva, she will escape to the vampire stronghold, which you will visit in the further part of this mission.

Take the vampire's documents to the Jarl. After a short reading the woman will tell you that a terrible thing is going on. Apparently Alva wasn't the only bloodsucker in town, as Morthal is being quietly infiltrated by the forces of darkness for quite some time. 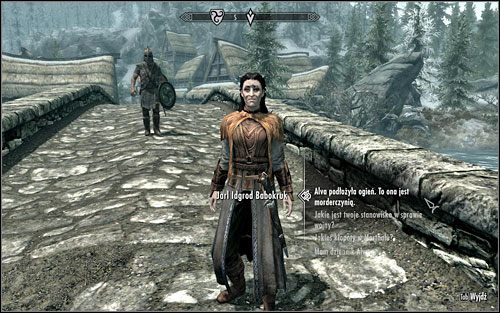 The vampire's notes clearly state that their master, Movarth, has settled nearby town and is leading a scheme of penetrating the society of Morthal. Your objective should be to save the citizens - quickly head to Movarth's Lair and kill all his servants.

Head out of town and go north-east. After a short walk you should reach a cave - Movarth's Lair. Go inside and kill two Spiders at the bottom of the cave. Afterwards head onwards and kill the first Vampire's Thrall inside the big grotto. Turn left and kill another Thrall, who's digging a hole for the monsters' victims (screen below). 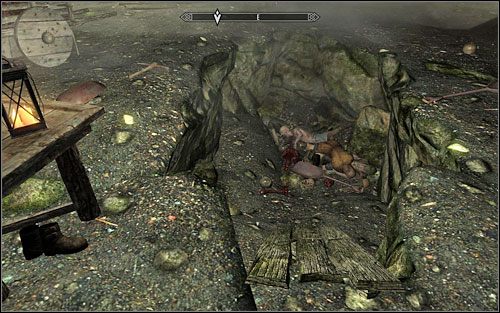 Further on, you will reach a big cave. Your main enemy will be sitting beside the table, with his Thralls and weaker Vampires around him. Stand on top of the platform and attack the enemies from a safe distance - you should be able to kill a few of them before they can reach you. If you hurt Movarth badly, he will run to his room an leave the other monster to you. 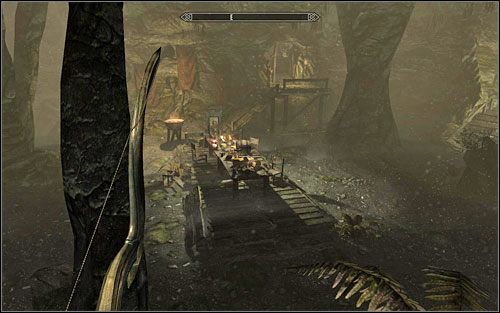 Go to the room in which the master vampire is hiding and try killing him from afar. Try keeping him at distance at all times - he's capable of sucking out life at a frightening rate. If you have no other choice, kill him with a melee weapon. With him dead, you can head out of the underground. 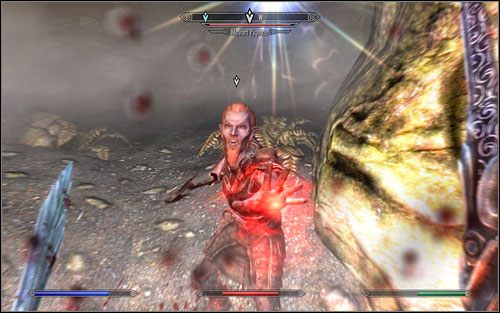 Before heading out of the cave, take a look around. Inside Movarth's quarters you will find 2920, vol 02 - Sun's Dawn which can boost your Illusion. Afterwards explore the side caves inside which you will come across more servants and some more equipment. With your exploration hunger satisfied, head to the cave exit. At the exit you will once again meet Helgi's ghost, who will tell you that her mother is calling her home. 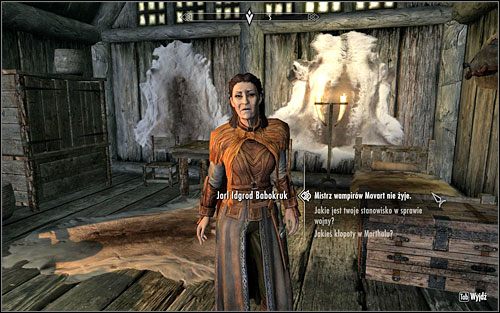 Return to the Jarl of Morthal and give a report. In return for your deeds you will receive a big amount of gold and lifelong gratitude of the citizens. You can call yourself a proper hero.