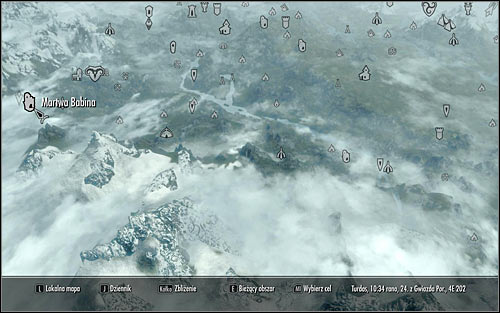 Open the world map. Your destination is the location knows as Dead Crone Rock (screen above), found in the western part of Skyrim. Getting there is unfortunately very difficult; it would be best to begin at the nearby Markarth. 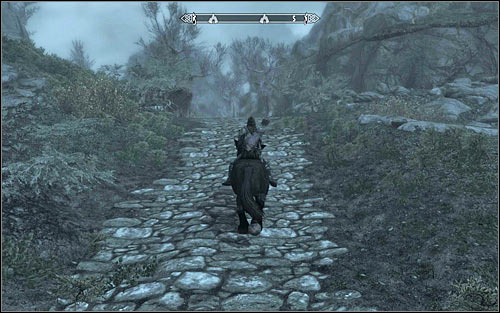 The game won't let you use the most obvious option of heading south-west, as Markarth and Dead Crone Rock are divided by mountains and you wouldn't be able to do anything even with a horse. Instead, head south-east, staying on the main track (screen above). 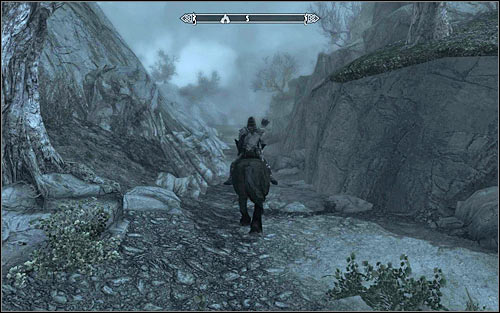 I'd recommend getting off the main track only after finding yourself more or less in a straight line from the Dead Crone Rock. Head onto the lesser path leading south (screen above). 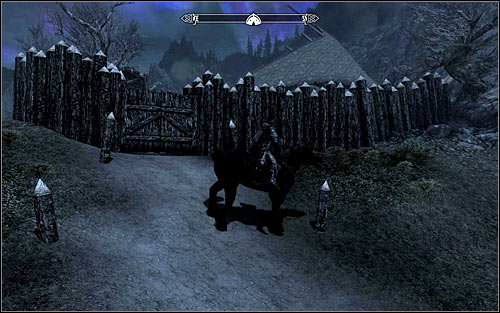 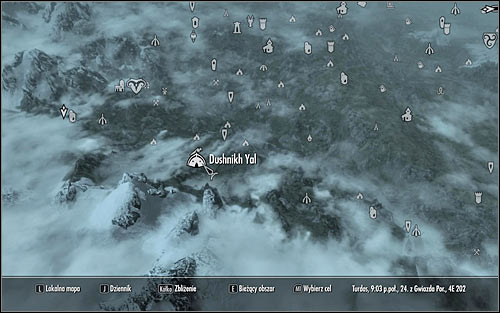 Keep going south and you should eventually reach a small town of Dushnikh Yal (screens above). Treat it as a checkpoint and save your game just to be sure. 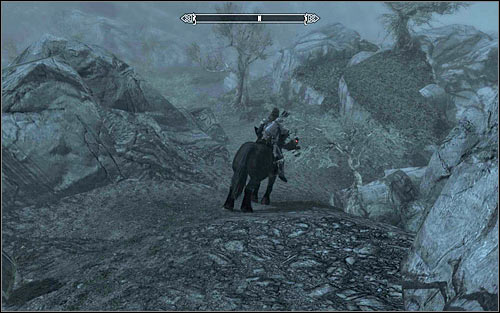 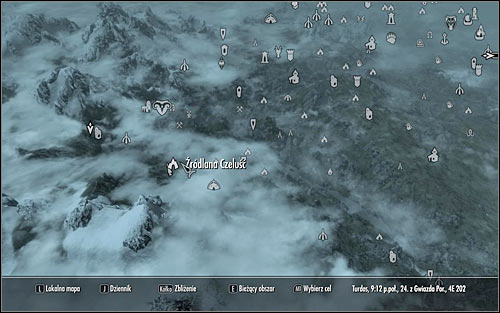 Turn west and afterwards north-west. The next checkpoints is the Purewater Run. Walk round it from the southern side, choosing the slightly visible path leading down (screens above). 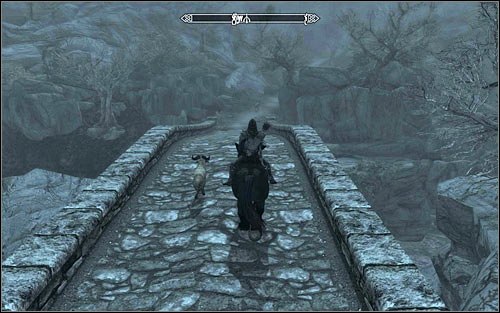 From now on it should get easier, as you will have a hardened path in front of you and therefore it will be easier to stick to it. Head west, crossing the small bridge (screen above). 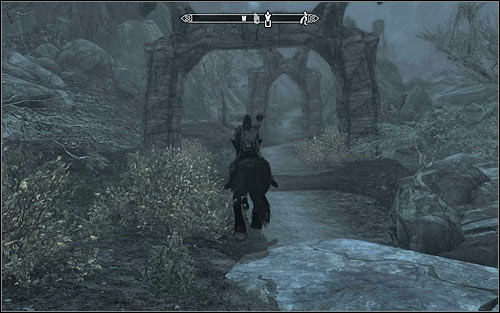 Soon enough in the distance you should note constructions which are parts of another location, namely Hag Rock Redoubt. Stick to the main path, reaching the area where it goes below a couple stone gates (screen above). I'd recommend saving your game now, as you're nearing the destination. 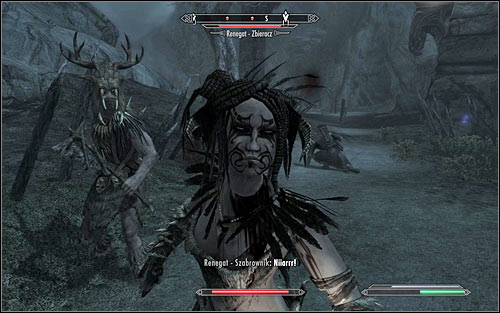 After reaching the ruins, you will get attacked by the Forsworns (screen above). I'd especially recommend looking out for the archers and enemies using magic. Don't let them surround you, especially if you're playing with a character preferring ranged attacks. 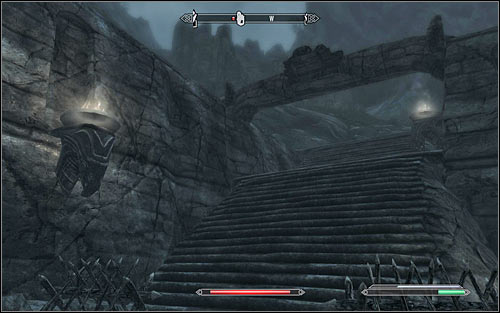 After eliminating the closest enemies, you will need to decide how to reach the Dead Crone, the tallest tower visible in the distance. The game will most probably suggest heading through the Hag Rock Redoubt Ruin, though I'd recommend choosing the shorter path and using the wide stairs (screen above), going west. 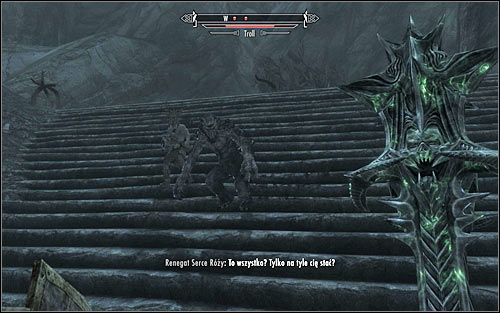 As you climb, you will be of course attacked by more Forsworns. You should especially look out for the Forsworn Briarheart who will join the fight a bit later on (screen above). try to eliminate him as fast as possible, as otherwise he might easily kill you with powerful offensive spells and summon an Atronach. He won't however be the only problem, as he will be accompanied by a Troll who you should keep at distance. 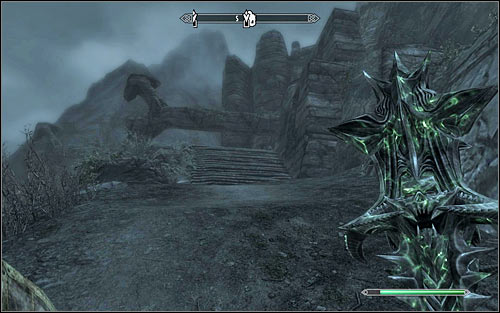 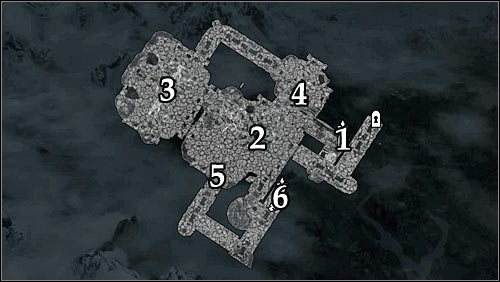 After reaching the highest level of the ruins, turn south and head towards the tower visible in the distance, the Dead Crone (screen above). Open the door to get inside and start exploring the location. 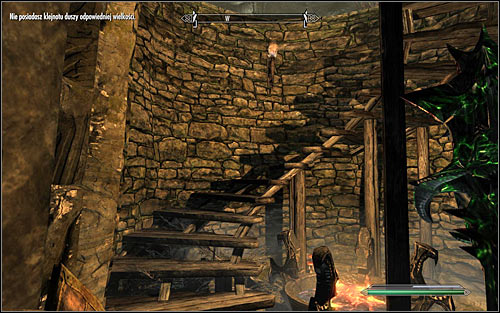 Start by exploring the ground floor to find a chest and battle a few Forsworns, who should soon appear. Afterwards choose the stairs leading onto the upper level (screen above). As you have probably noticed, access to the south-west corridor is blocked by a lowered grate. Pulling it up will be your next task. 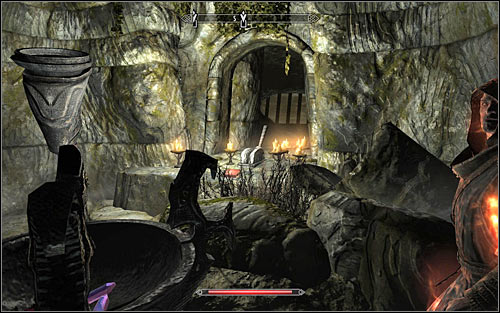 Enter the north-west room (the dining room) and head through the passage in the north-east part. Don't stop for a moment, thanks to which you won't need to worry about the fire traps (you can deactivate one of them by taking the soul gem from the pedestal). Eventually you should reach the eastern room (screen above) with a lever inside. 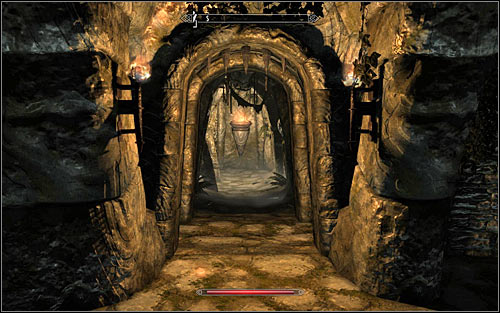 Pulling the lever will raise the grate, so return to the middle room and head into the newly unlocked south-west corridor (screen above). Follow the narrow corridors until you reach the exit door. I'd suggest saving your game here, as you will need to fight a mini-boss. 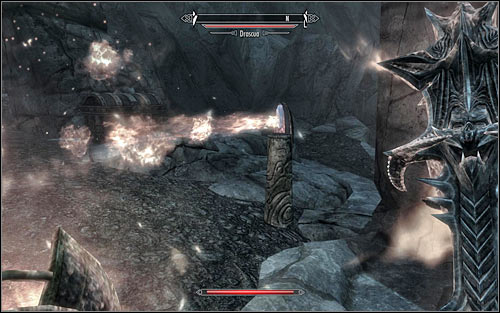 Go up the stairs and begin the fight with Drascua, a Hagraven. The main difficulty of this battle won't paradoxically be the boss' attack, but the traps supplied by soul gems (screen above). Look out for them, as otherwise you will lose your health almost immediately. Personally I'd suggest choosing either to quickly take out the gems from the pedestals or backing out to the stairs, where the traps don't be able to hurt you. 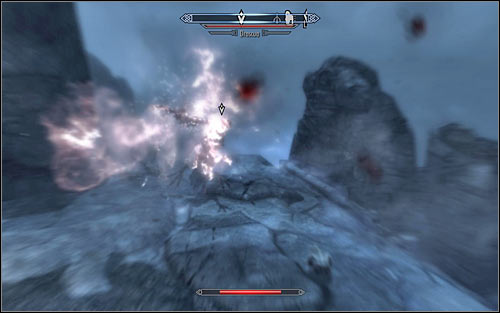 As for Drascua herself, try to block her magic attacks, as they are the largest danger. The Hagraven can be either eliminated normally, or by using a clever trick of catapulting Drascua with the Unrelenting Force Shout (screen above), hoping she dies after falling to the lower level of the ruins. 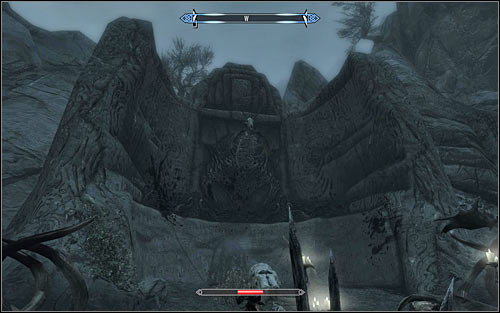 Keep fighting until you drain all of Drascua's health. I'd recommend taking a look around the area to find a chest with precious items and a Word Wall which will let you learn the Word of Power - Fear, Dismay. In the end examine the body of the Hagraven and take the Pommel stone of Mehrunes' Razor.