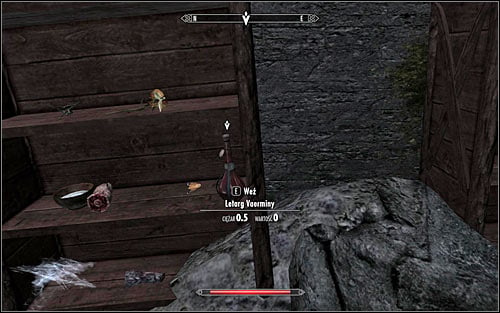 Speak to Erandur again and he will tell you to find a bottle of Torpor. Just like the objective with the book, its location will be marked on the map so you won't have to search for it too much. Vaermina's Torpor can be found on one of the shelves in the lower part of the Laboratory (screen above). 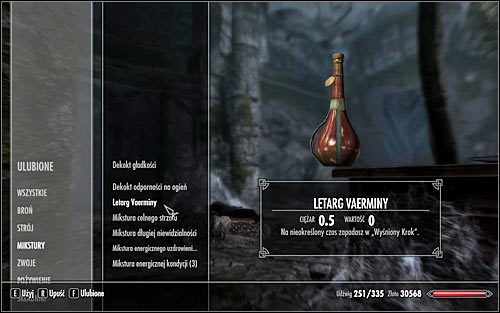 Return to Erandur and inform him of finding the potion. The priest will tell you to drink the content of the bottle. Open the inventory, head to potions and drink the Vaermina's Torpor (screen above) by pressing E. 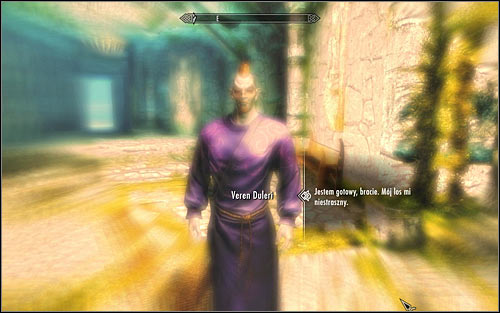 A rather untypical scene awaits you, it will take place during a dream and show the events before the gas which was supposed to stop the Orcs from obtaining the Skull of Corruption was released. You will need to change the course of events a bit and the good news is that throughout the dream, you won't have to worry about your safety. Start off by listening to the conversation between two Vaermina priests and respond to one of them in the end (screen above). 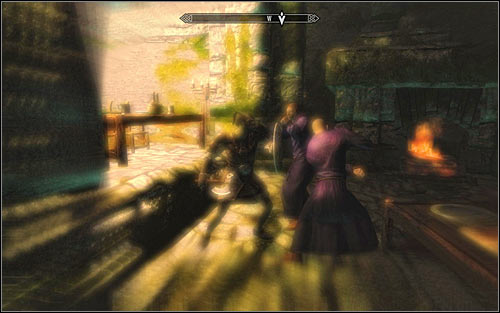 Head east. Go through the consecutive rooms, ignoring the priests fighting with the Orcs (screen above). Don't worry about not having any weapon, as not battle is going to end prematurely and no Orc will attack you. 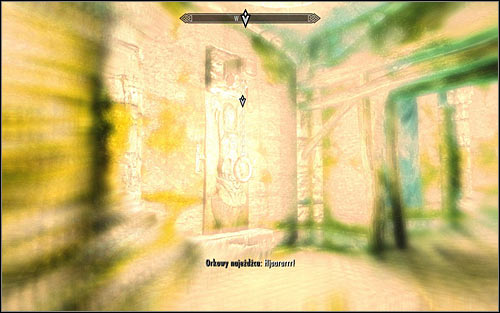 Keep exploring the temple, using stairs on your way. Eventually you should reach one of the main corridors of the temple. Approach the chain marked by the game (screen above) and interact with it to release the Miasma. Watch the last scene and the dream will come to an end. 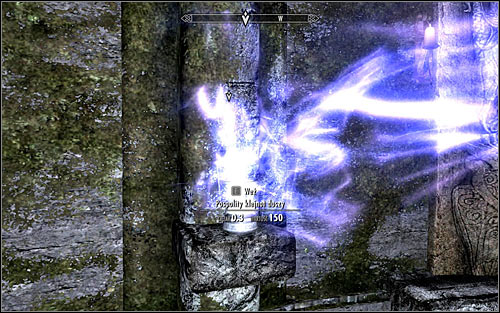 Stay where the dream has ended and take the Common Soul Gem marked by the game (screen above) to disable the magical barrier. Approach Erandur and speak to him. The mage will be happy that the plan has succeeded and as a result you will able to head to the last room of the temple.

Reaching the Skull of Corruption 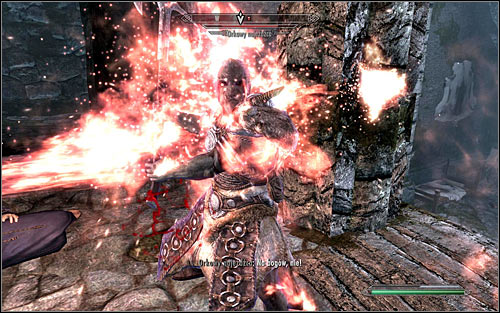 Follow Erandur, who should head south-east. On your way you will need to fight a couple times and I'd especially suggest to look out for considerably strong Orcish Invaders (screen above). Block their attacks and try to keep them at distance, depending on the skills on your follower. 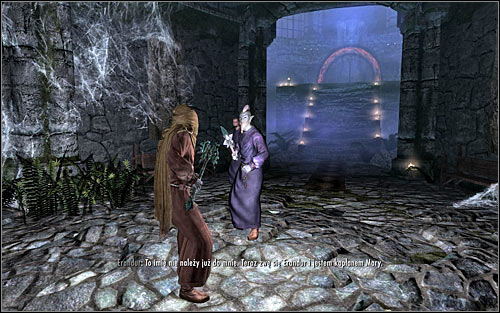 Soon you should reach the Skull of Corruption. I'd suggest saving your game here, as you will meet two priests, namely Veren Duleri and Thorek. They will be furious at Erandur for letting them behind here and therefore after a short conversation they will attack you. 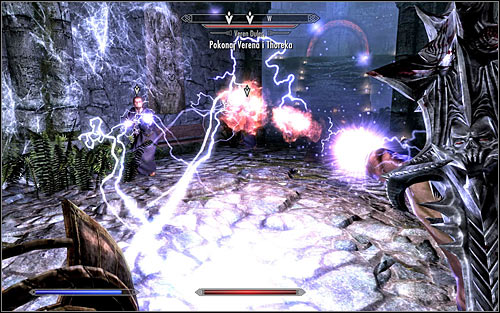 Before the fight begins, you should increase your resistance to lightning, as Veren and Thorek will mainly use those types of spells (screen above). If your character prefers direct combat, try to push a chosen priest into the corner and don't let him run away. 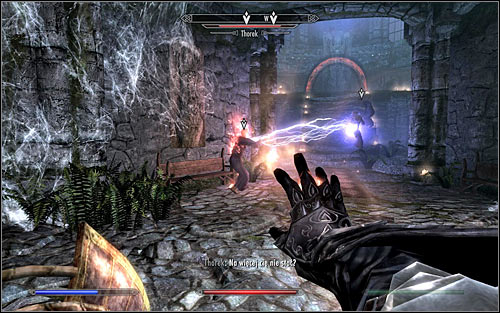 If you prefer ranged attacks, you should use on the fact that the enemies will at first be focused mainly on attacking Erandur (screen above). Regardless of the chosen option, you need to keep fighting until Veren and Thorek die.

New main objective: Wait for Erandur to dispel the barrier 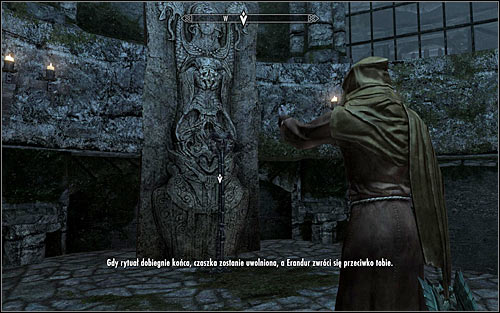 After the battle, speak to Erandur who will move to the ritual of removing the magical barrier surrounding the Skull of Corruption. You don't need to do anything in particular yourself. It's however worth to mention that Vaermina will speak to you in the meantime (screen above), suggesting that after obtaining the Skull, Erandur will turn against you and that you should kill him now, while there's still time. I'd suggest saving your game at this moment, as you will need to decide how the quest's going to end.

Making a decision regarding the Skull 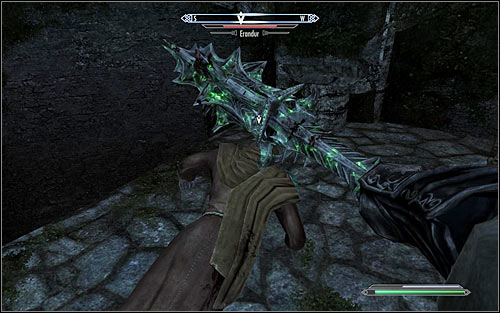 If you intend to kill Erandur, you need to do it before he completed the ritual. Try to attack him with your best skill by surprise, therefore dealing the maximum possible damage before moving to the battle itself (screen above). Erandur isn't much stronger that the other priests who you've fought before, though you should keep an eye on the health level. After the battle, take the Skull of Corruption from the pedestal. It's not a very useful staff, with the ability to deal additional damage when there are sleeping foes in the area. 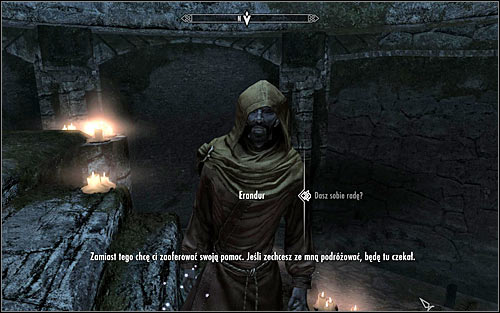 If you intend to let Erandur finish the ritual, you don't need to do anything. Just wait for the whole process to end and speak to the friendly priest (screen above). This option won't give you any material prizes, though you will be able to invite Erandur to join your party as a full-time member.