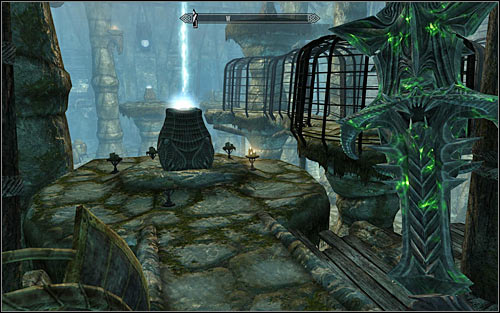 After the fight, use the stairs in the south-east corner of the big room and afterwards turn left, activating the first pedestal (screen above). That's unfortunately now the end of this puzzle, as in order to reach the next location you will need to turn on as much as three pedestal. 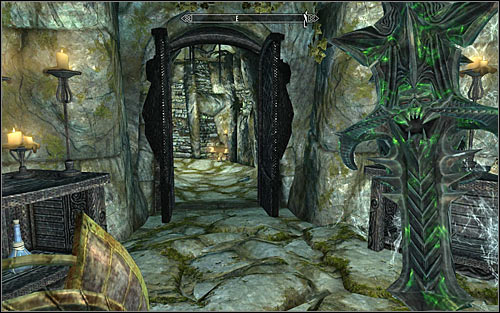 Turn around and head to the newly unlocked eastern room (screen above). There, turn north. While you're at it, I'd suggest checking out the north-east storage room, inside which, apart from a chest, you can find some precious items left out in the open. Return to the previous room and choose the left corridor for a change. 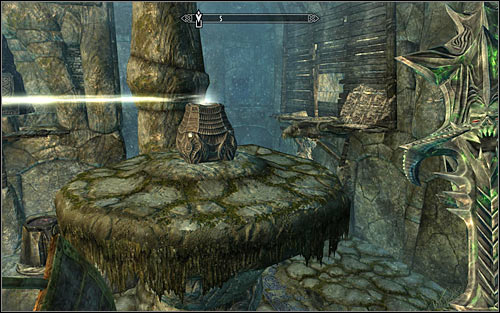 Look out, as at the place where the corridor turn west there's a trap activated by touching the line. Move on, reaching the fenced balconies in the big room. Head west and after reaching a destroyed bridge turn left and jump onto the ledge with the second pedestal (screen above). Interact with it, of course. 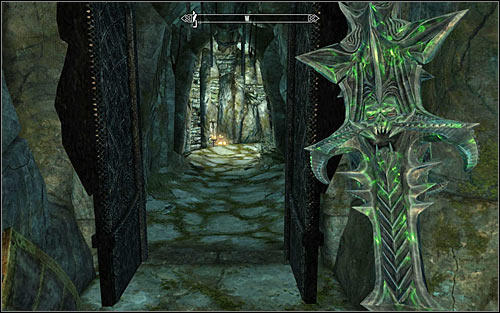 Once again jump onto the northern balcony and continue onwards, coming across a locked chest on your way. Eventually you should reach a western passage (screen above), which was unlocked as you activated the second pedestal. Head west and turn north. After reaching the new room, eliminate the Corrupted Shades there, once again looking out for archers attacking from a distance. 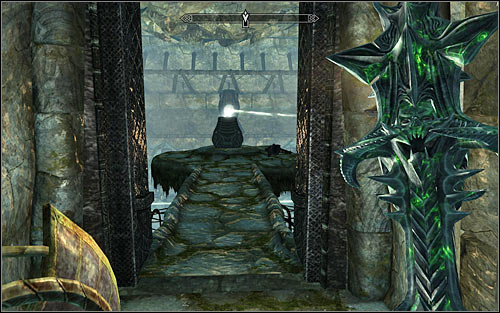 Ignore the western stairs and use the ones in the eastern part of the room. After reaching the upper balcony, choose the eastern corridor. Soon turn south, thanks to which you will reach the last, third pedestal (screen above). 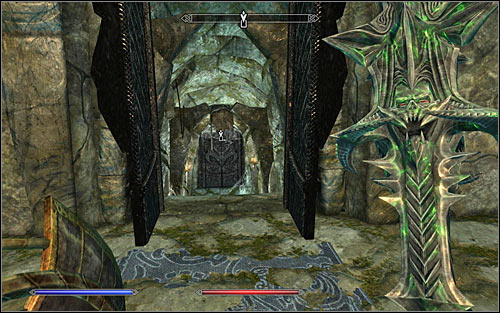 Activating the third pedestal will lead to unlocking the exit from the ruins, though the problem is that it's on the lowest level. Carefully jump onto the consecutive shelves, trying not to jump from too high. After getting to the very bottom, head to the southern passage (screen above) and open the door leading to Kilkreath Catacombs. 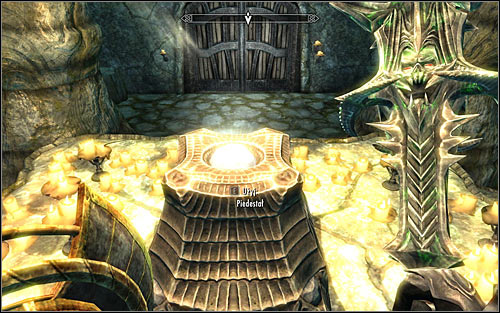 Head towards the southern room. After getting there, check out the content of the chest for some precious items and afterwards interact with the pedestal (screen above), unlocking the eastern corridor. Before heading further, I'd recommend saving your game as you will soon fight the strongest enemy in this quest. 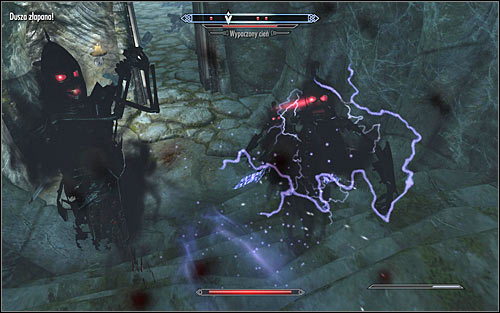 Carefully approach the eastern room in which you should see Malkoran and the Corrupted Shades accompanying him. Personally I'd recommend letting the Shades see you and afterwards retreat to fight them in the corridor leading to the last room of the catacombs (screen above). With some luck, you should be able to get rid of all, or at least most of them, before the Necromancer appears. 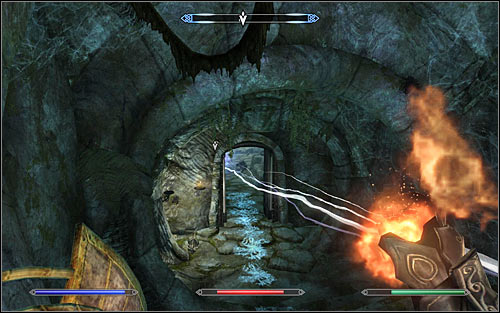 Malkoran isn't an easy enemy. If you prefer ranged attack, it would be good to stay in the corridor in which you fought with the Shades and hide every time Malkoran casts a more powerful spell (screen above). 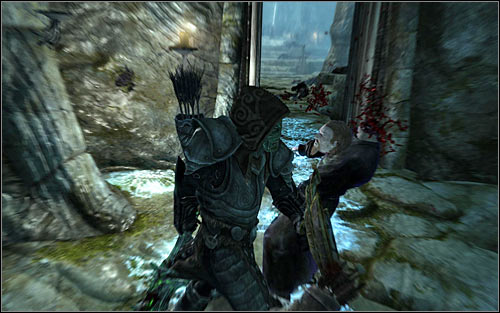 If you prefer close combat, it would be good to wait for the Necromancer to appear in the corridor in which you fought the Shades (screen above). The main advantage of such method is the fact that therefore he will move away from the bodies in the main room and won't be able to resurrect them. Fighting in the narrow corridor, you will be able to push Malkoran to the wall easier or use the Unrelenting Force Shout to knock him down to the ground. Regardless of the chosen tactic, you need to drain all of his health. 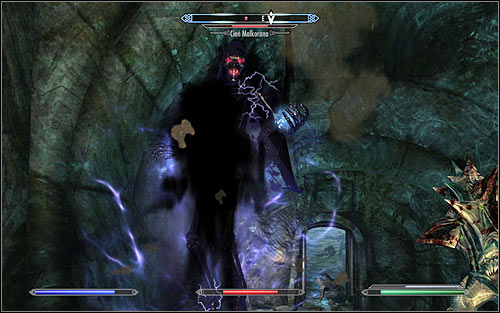 That's not the end of the battle, as the murdered Necromancer will change into Malkoran's Shade (screen above). If you prefer ranged attacks, quickly move away from the Shade and use protective spells to defend from his most powerful magic attacks. If you're more into direct combat, continue attacking him (screen above) while trying to knock him out of balance and not leaving him too much time for counterattacks. 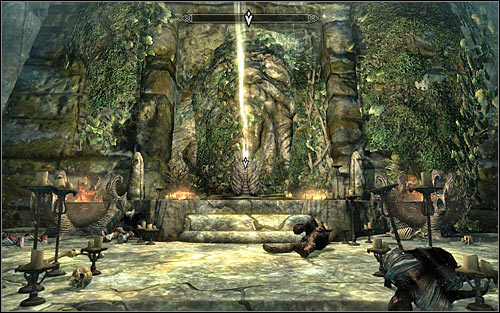 I'd of course recommend beginning with examining Malkoran's body, though he won't have anything particularly precious beside him. Enter the last room of the catacombs and approach the pedestal marked by the game (screen above) to obtain the Dawnbreaker. 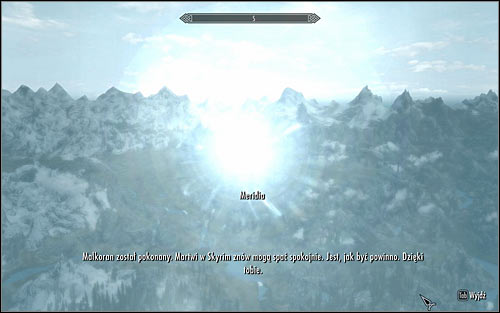 The last conversation with Meridia awaits you, just like the last one in the sky (screen above). the Daedric Prince will thank you for getting rid of Malkoran and let you keep the Dawnbreaker. It's a very good one-handed sword which deals additional fire damage and has increased effectiveness against undead.