Heading to the Fallowstone Cave 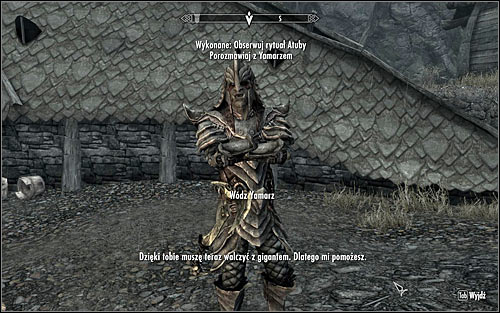 Approach Chief Yamarz and speak with him (screen above). The Orc will make you join the expedition to the Giants temple, additionally promising a prize for taking care of their leader. The Chief will tell you to meet him there. 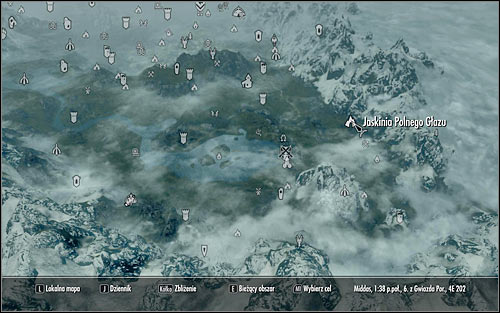 Theoretically you could head to the Cave in Yamarz's company, though it would only be a waste of time as you don't need to worry about something bad happening to him. Open the world map to establish that Fallowstone Cave is east of Riften (screen above). Therefore it would be best to begin at Riften. 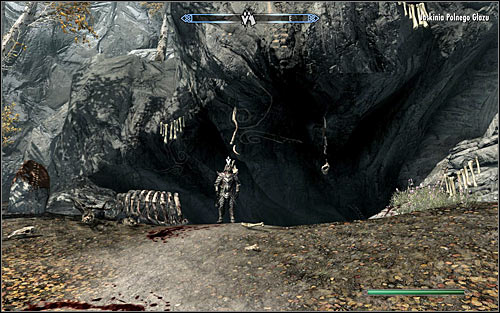 Be careful, as on your way to the cave you will not only have to fight off wild animals, but also carefully go down a mountain slope. Find the cave and approach Chief Yamarz (screen above). After a short conversation, enter Fallowstone Cave. 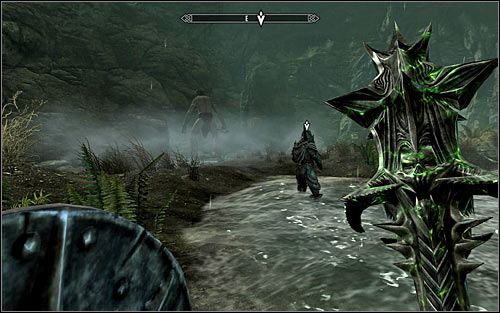 Wait for Chief Yamarz to head into the cave and follow him. On your way you will need to jump down some ledges, though it shouldn't cause you much trouble. Look out for the Giant that you will pass by a bit further (screen above). He shouldn't attack you or Yamarz if you don't provoke him. If for some reasons he does, look for Yamarz and try to draw away the Giant's attention. 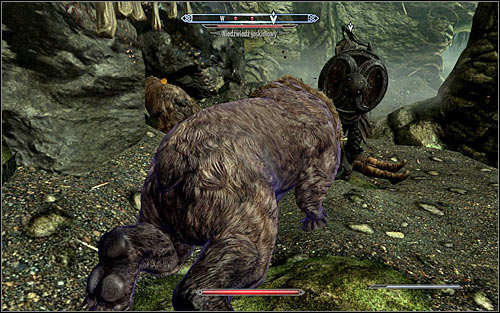 Continue onwards and soon afterwards you will come across a group of Cave Bears which you will have to take care of (screen above). It's best to attack the Bears one at a time and not let them approach you, especially if you're not using heavy armor. 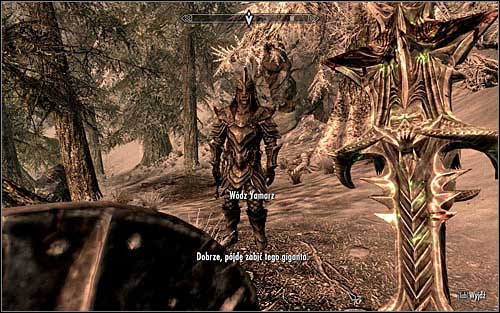 After dealing with the bears, continue going deeper into the cave and eventually you will reach a passage leading to Giant's Grove. Follow the only possible path. After approaching the Giants Leader lair, Yamarz will stop and speak to you (screen above). You will need to make an important choice. 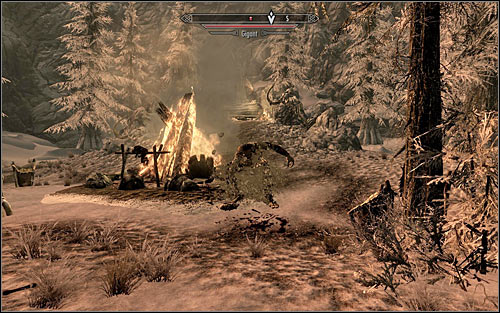 If you refuse to fight the Giant, Yamarz will head to its lair alone and will get killed pretty much at once (screen above). Despite what it might seem it's not the worst option, as the Orc would betray you later on anyway. If you agree to kill the Giant, you will have to count on yourself at start but it's possible for Yamarz to join the battle later on and not die of one hit this time. 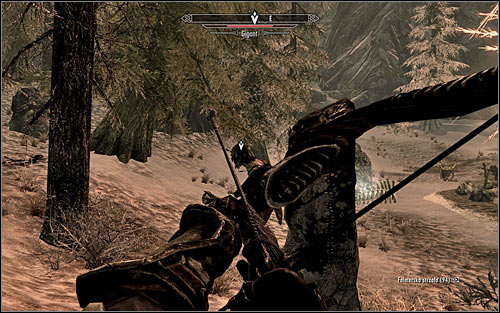 If you prefer ranged attacks, during the fight with the Giant you should use the nearby trees and other big objects to your advantage, hoping that the creature will be blocked by them. It's also a good idea to use your party member to draw the Giant's attention away (screen above), though look out for him not to get killed. 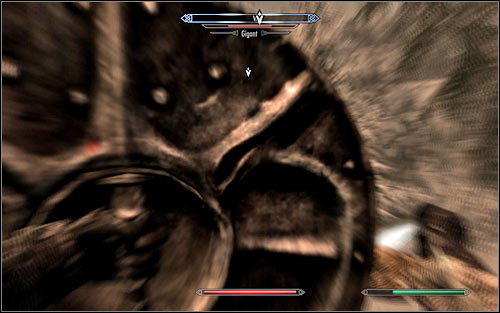 If your character prefers close combat, it's worth to make use of the Unrelenting Force Shout, thanks to which you will be able to knock the Giant to the ground. It's also a good idea to use your shield each time the monster decides to use the large hammer (screen above). 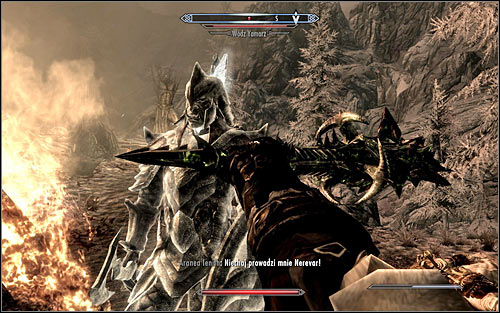 Keep fighting until the Giant dies. If Yamarz is already dead, you will be able to skip to the next step automatically. Otherwise you will need to fight the Chief, who will betray your trust (screen above). As Yamarz is a warrior (and quite agile), try to keep him at distance. It's also worth to use spells, potions and powers which will let you paralyse or at least slow him down. 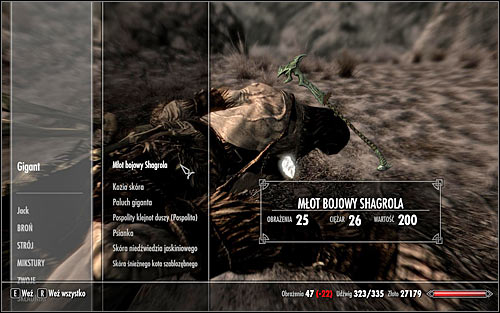 After the fights are over, take look around the area to find a chest with precious items, among other. It's also worth to examine Chief Yamarz's body for a very precious heavy orc armor. In the end examine the Giant's body for the Shagrol's Warhammer (screen above). 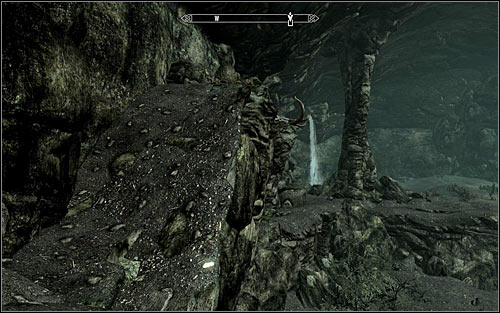 You now need to leave the Grove and go through the cave again, as fast travel is impossible for now. Look out for the Giant, who once again shouldn't attack you on his own. Choose the left path leading west (screen above) to reach the cave exit. Only afterwards open the world map and head to the village of Largashbur. 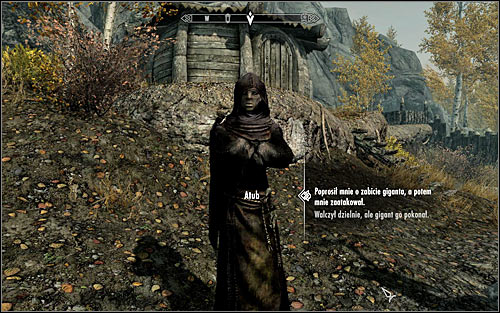 Find Atub and speak to her. Whether you tell her the truth about Yamarz (screen above) or lie doesn't matter at all. Soon afterwards Malacath will speak and ask you to place the hammer onto the altar. 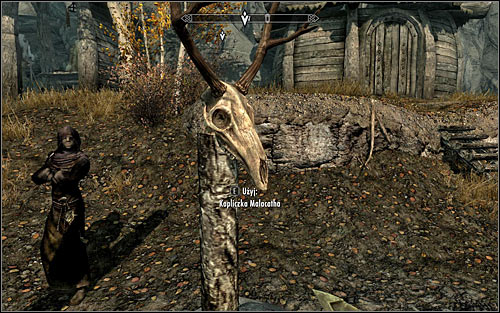 Approach the altar and interact with it (screen above) to end this quest. Note that the hammer that you brought back from the cave will be replaced by the very precious Volendrung which you can take as your prize. It's an excellent two-handed weapon which additionally drains stamina points. Don't however pick up the other items (inter alia part of an orc armor), as it would be treated as thievery.