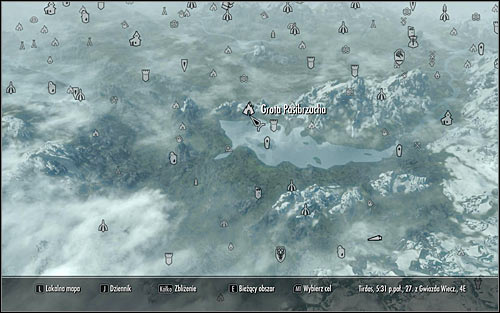 Open the world map and find the destination, i.e. Bloated Man's Grotto (screen above). The location is nearby a big lake, BUT you need to approach it from the northern side. I'd recommend beginning in Rorikstaed (you would need to head south-east) or Whiterun (south-west). 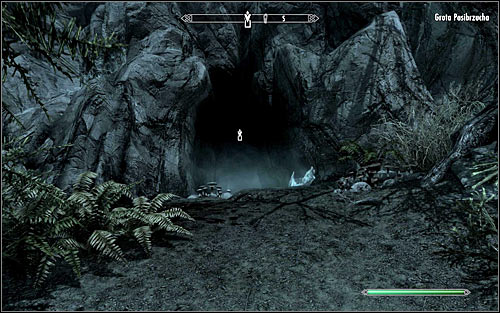 Be careful, as on your way you may come across wild animals, bandits or especially dangerous Giants. After reaching the destination, find the entrance to Bloated Man's Grotto (screen above). 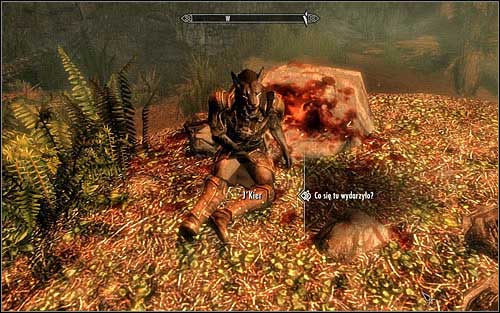 Go through the cave and after reaching a small camp, speak with the dying Khajiit J'Kier (screen above). The hunter will tell you that the Khajiits were unable to defeat the werewolf, who turned out to be stronger and smarter than them. 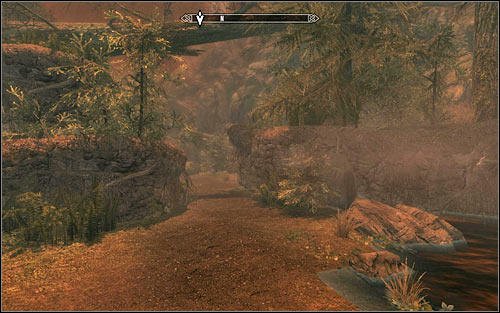 After the conversation, choose the path leading north (screen above). I'd suggest saving the game on your way, as you will soon face an important choice:

Note! If you want to kill Sinding instead of cooperating with him, skip to Option B - Kill Sinding. 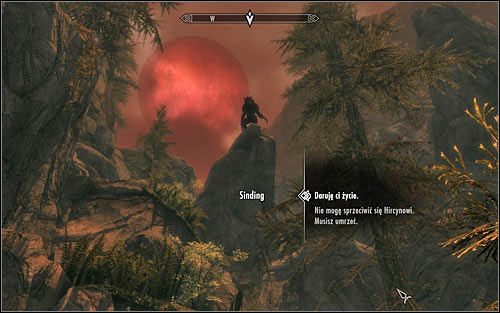 You should soon reach a place where you will note Sinding standing on a rock ledge (he has transformed into a werewolf in the meantime). Speak with him and Sinding will promise to stay away from civilization, as long as you spare him. In the end choose the upper dialogue option (screen above), promising to help him in getting rid of the hunters who are trying to kill him. 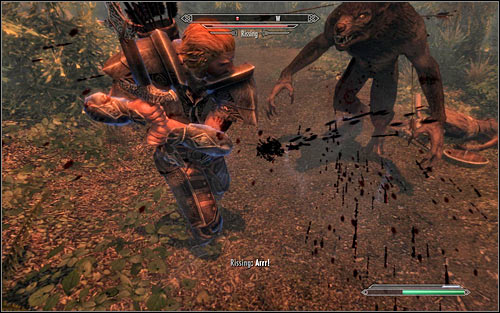 Follow Sinding's steps, using the stairs and heading north-west. I'd recommend checking out the chest that you come across on your way, as there are some precious items hidden inside. Soon you should meet two hunter, namely Rissing and Trasun (screen above). Rissing is by far more resistant, so he should die last. If you prefer ranged attacks, don't jump down and attack the hunters from up high. Notice - during this and the further battles as well, don't use AoE spells as Sinding might turn against you if you hurt him! 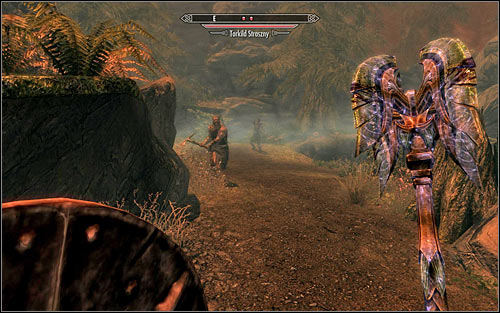 Continue going onwards. The second group will consist of three characters, namely Torkild, Yar gro-Gatuk and Eriana (screen above). The first to die should be Yar and Eriana, as they will probably attack you and Sinding from a distance. 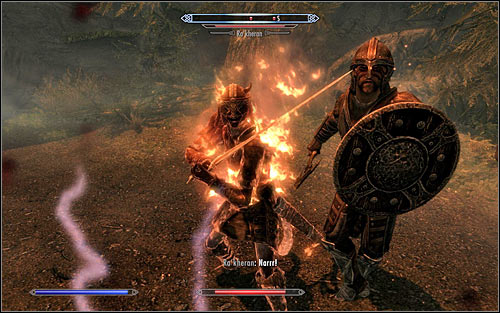 Resume exploring the area. Before you there's yet another battle and this time you will have to eliminate three hunters. They will be Heratar, Ra'kheran and Ahjisi (screen above). Don't let them surround you even if you're playing as a warrior, as their attack can deal large damage. 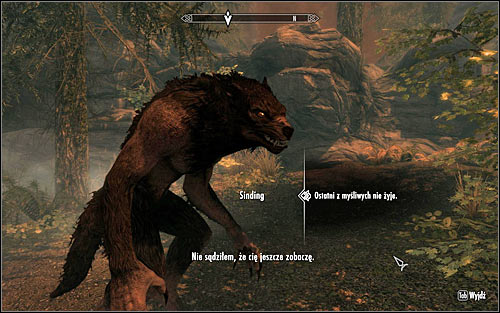 After the battle, approach Sinding and speak to him (screen above). The werewolf will thank you for your help and maintain his promise. 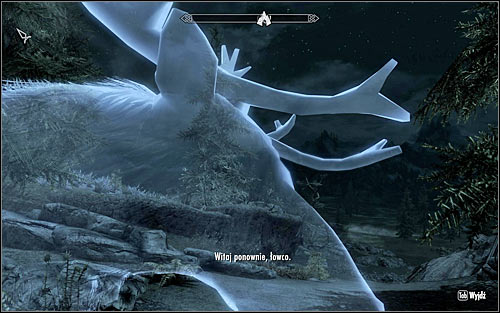 Despite the quest came to an end, I'd recommend returning to the camp of the Khajiits who you have killed, choosing the path leading east. Head out of Bloated Man's Grotto and you should automatically begin a second conversation with the Aspect of Hircine (screen above). The Daedric Lord will be impressed by the fact that you were able to deal with his hunters. The prize for completing this quest will taking the curse off of the Ring of Hircine. You will therefore be able to use it as you please, with two possible werewolf transformations per 24 hours (by default it was only one).

Note! If you don't want to kill Sinding and rescue him instead, skip to Option A - Spare Sinding. 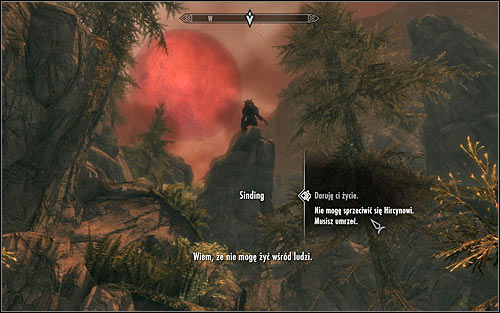 You should soon reach a place where you will note Sinding standing on a rock ledge (he has transformed into a werewolf in the meantime). Speak with him and Sinding will promise to stay away from civilization, as long as you spare him. In the end choose the lower dialogue option (screen above), rejecting his offer and therefore starting the hunt. 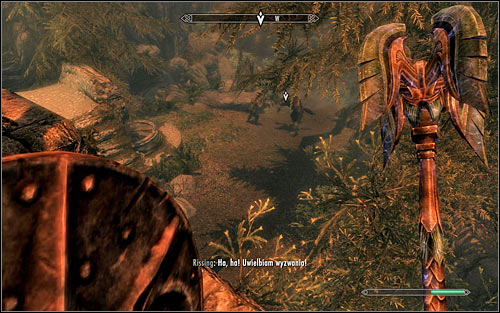 Follow Sinding's steps, using the stairs and heading north-west. I'd recommend checking the chest you come across on your way, as there are a few precious items inside. The running werewolf will from time to time bump into other hunters taking part in the hunt (screen above) and it's a very good chance to catch up with him and deal some damage. An additional advantage of such a method is that Sinding is almost always more interested in attacking the hunters than you. 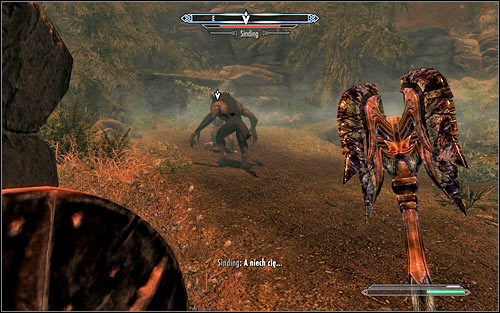 You rather won't be able to defeat Sinding with the first hunters group. You will have more chances with the second or third group (screen above). Luckily you don't have to worry that he will run away after dealing with all three groups, as after killing all the hunter he will just move on to attacking you. 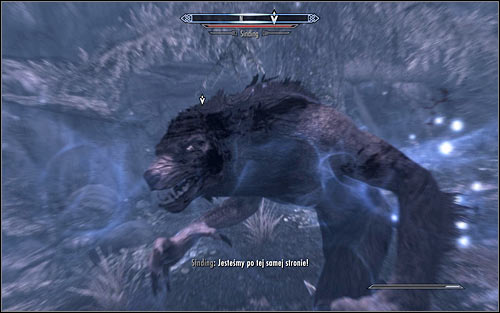 An interesting way of slowing down the werewolf is using potions, weapons or spells with paralysis effect. The Slow Time Shout might come in handy for example (screen above), thanks to which you will be able to perform successful attacks easily. 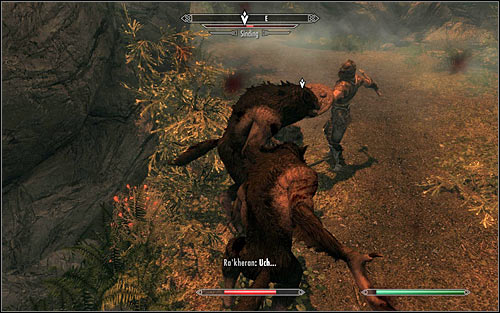 As for maximizing the damage you deal, Sinding doesn't have high resistance to attacks based on fire. It's also a good idea to change into a werewolf (screen above), as claw attacks should deal high damage. Try to keep Sinding occupied at all times, as his health bar can regenerate at a quite staggering rate. 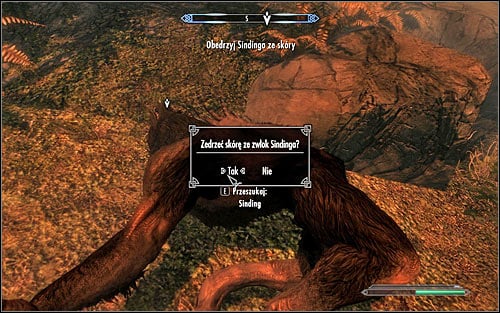 Keep fighting until you defeat Sinding. Approach the werewolf's body, interact with it and confirm the will to skin it (screen above), therefore gaining Sinding's Skin. 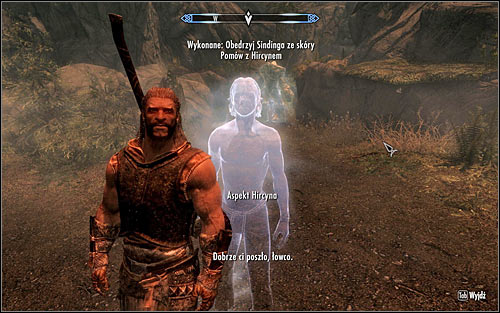 You should soon come across the Aspect of Hircine, with which you need to speak (screen above). The Daedric Lord will be happy with the results of the hunt. The prize for completing this quest will be the very precious light armor Savior's Hide. You also won't have to worry about the curse, as Hircine will take away the cursed ring from you.