Quest requirements: This quest can be completed after reaching at least level 20. I'd recommend putting it off in time as long as possible, as it includes a series of very demanding fights, including ones with enemies who can be qualified as bosses. 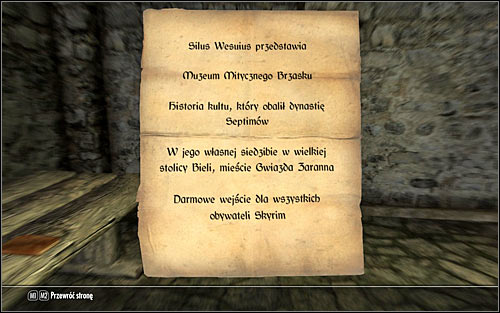 Soon after reaching level 20, visit one of the main cities to be approached by a courier who will give you the invitation to Silus' Museum in Dawnstar. You can of course check its content in the inventory (screen above). 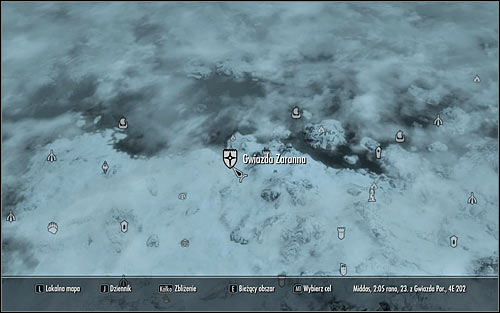 Open the world map and head to the city of Dawnstar (screen above) found in the northern part of Skyrim. If you haven't discovered it yet, use a carriage (for example the one stationed in Whiterun Stables). 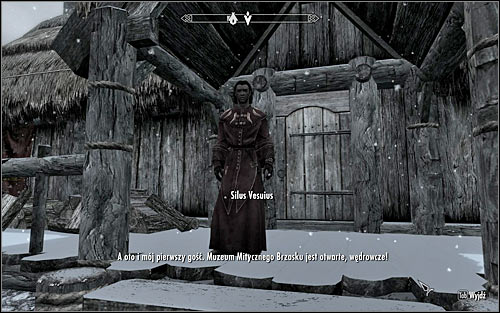 After reaching Dawnstar, during the day, head to Silus Vesuius's House, the northernmost building. If it's your first visit there, Silus will be speaking with Madena. Otherwise, the museum owner will be standing in front of the house alone. Speak to Silus (screen above), who will ask you to visit The Museum of the Mythic Dawn and discuss a certain matter with him.

New main objective: Speak to Silus inside his house 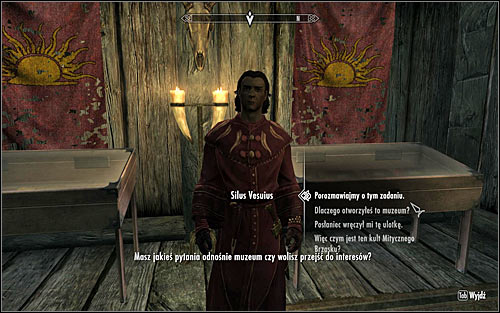 Enter Silus Vesuius's House. Depending on your liking, you can take a look at the exhibit or speak with Silus about the details of the mission he wants to give you (screen above). He will tell you of a powerful artifact known as Mehrunes' Razor which has been split into three pieces. Silus knows where to look for them and will ask you to retrieve them.

Note! Note that you have unlocked 3 new objectives. You can approach them anyhow, though to keep a certain order they have been presented in the same order as in the journal. 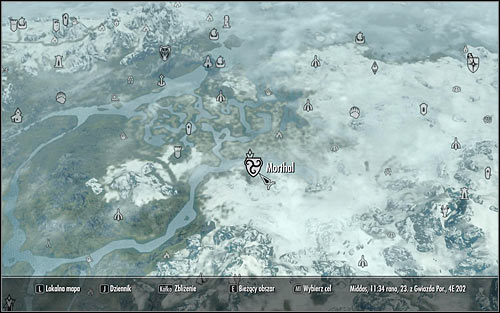 Open the world map. In order to retrieve the hilt, you need to head to Morthal, located in northern Skyrim (screen above). If you haven't discovered that area yet, you can use a carriage (e.g. the one at Whiterun Stables) or head west from Dawnstar. 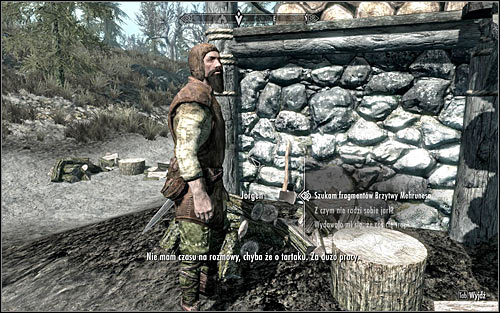 After getting to Morthal, head to the northern part of the village, cross a small bridge and you will reach a windmill and Jorgen and Lami's House. The most obvious option implies speaking with Jorgen (screen above). Ask him about the hilt and it will turn out that the man doesn't intend to give it to you. You can either pay him, persuade to change his mind or intimidate (two last options require highly developed Speech). Notice - if you don't want to speak with Horgen at all, you can always try to steal the keys from his pocket, though to do so you should be playing as a very skilled thief with invisibility potions or spells. 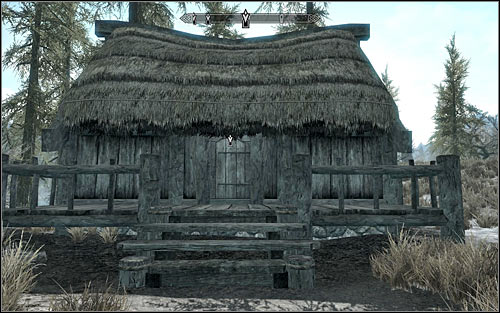 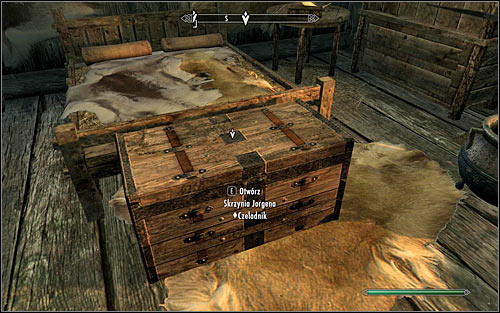 Enter the house and stand by the marked chest (screen above). If you received the Key to Jorgen's Chest from the farmer, you will be able to open the chest at once. Otherwise, you will need to play with picklocks, though the mini-game this time will be more difficult. Regardless of the chosen method, take the Hilt of Mehrunes' Razor from the chest. The game will offer you to return to the museum, though I'd recommend obtaining all three parts first and head to the quest giver afterwards. 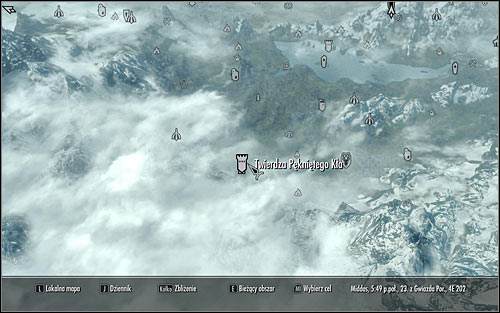 Open the world map. Your destination is the Cracked Tusk Keep found in the southern part of Skyrim (screen above). If you haven't yet discovered that location, it's best to begin at the nearby Falkreath and head west. 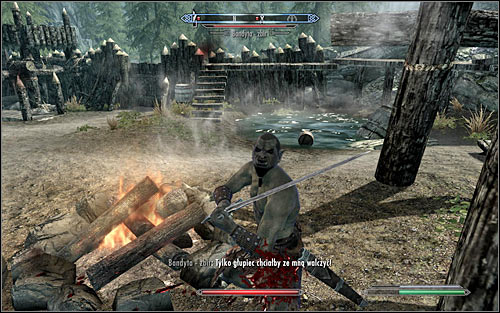 After reaching the destination, it will turn out that the Keep is in ruins and that Orcs have taken it over. If you don't mind eliminating all the Orcs, head to the main entrance or jump over the destroyed wall at any place and start fighting. You will need to eliminate both warriors and archers. After the fight, use the Cracked Tusk Keep entrance marked by the game. 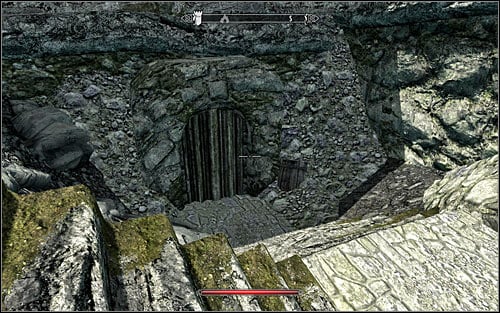 If you prefer to be stealthy and don't want to fight the Orcs, it would be best to enter the ruined keep from the north-west side, during the night. Jump over the destroyed wall at any place and find the Cracked Tusk Keep entrance, westernmost and accessible by stairs (screen above). I'd recommend such an option only if you don't mind using picklocks, as you will come across the first lock right now (medium level security). 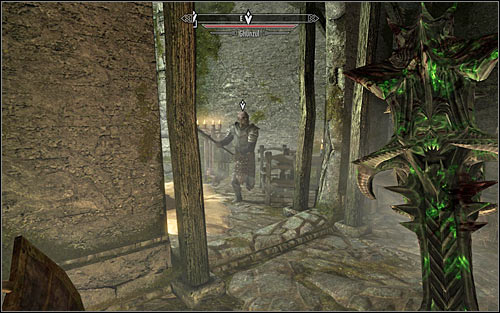 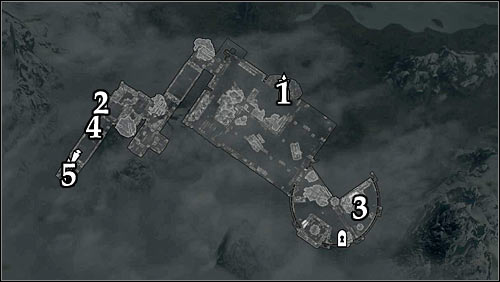 If you use the main entrance, be ready to get attacked by another Orc right after getting inside. Deal with him, go up the stairs and head south-east. Eventually you should reach the orc leader's - Ghunzul - room (screen above). Keep him at distance, especially if your character doesn't use heavy armor. Afterwards examine Ghunzul's body, collecting the Cracked Tusk Vault Key. 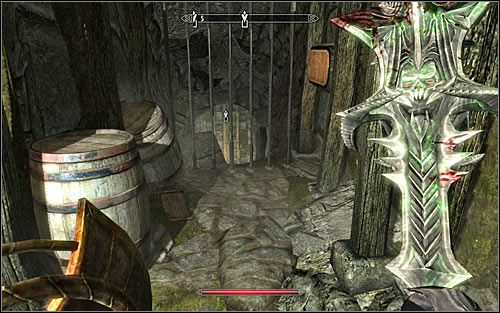 Return to the starting point and for a change head north-west. Afterwards turn south-west and soon you should reach a blocked passage (screen above). If you choose the suggested western entrance, you will begin in this area, thanks to which you won't have to fight with Ghunzul. 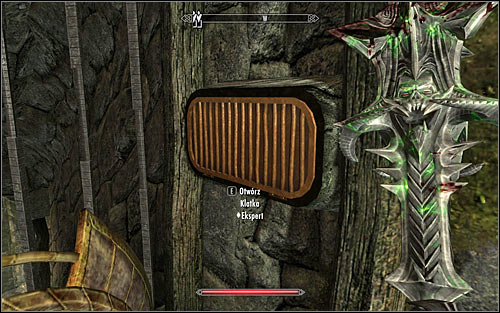 Find the cage on the right wall (screen above). If you have Ghunzul's key, you will be able to open it at once. Otherwise you will need to use picklocks to open very good quality lock. Regardless of how you opened the cage, press the button and head to the newly unlocked passage to Cracked Tusk Vaults. 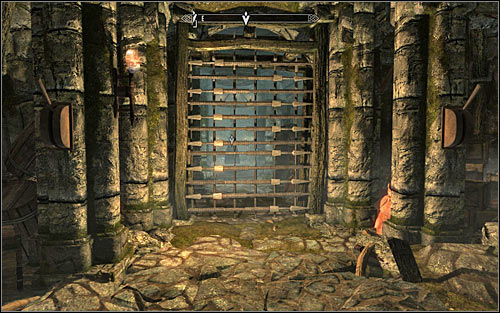 Head south-east. On your way it would be good to examine the two side rooms, interacting with the buttons on the wall in both cases. After reaching the blocked passage (screen above), look for a chest and afterwards pull both levers (left and right). 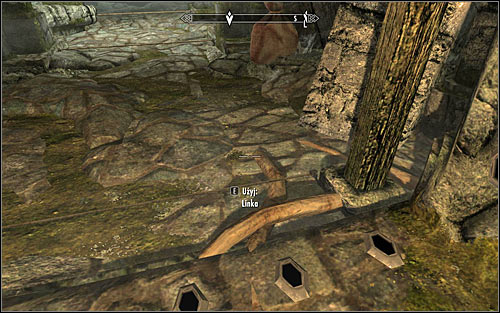 You need to VERY careful, as from now on you will fall into numerous traps. The first one is where blades were sticking out of the walls and floor (screen above). In the further part you will also come across traps activated by touching a line. 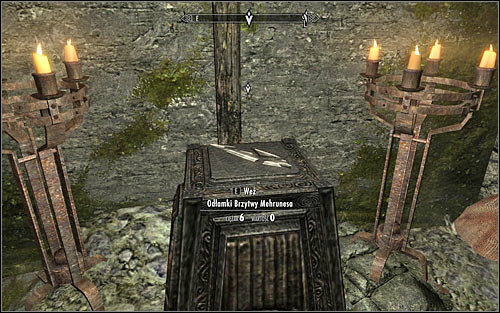 Take a look around the last room of the vaults for a locked chest and afterwards approach the pedestal with the Shards of Mehrunes' Razor (screen above). Take the shards and quickly retreat, as the last trap will be activated. The game will offer you return to the museum, though I'd first recommend collecting all three parts and speaking with the quest giver afterwards.