Quest requirements: This quest can be completed only after reaching at least level 14. Generally finishing it isn't too hard, as you will fight most battles accompanied by a friendly mage. Only the very ending is a bit more demanding, though you can do just fine even playing with a not very developed character. 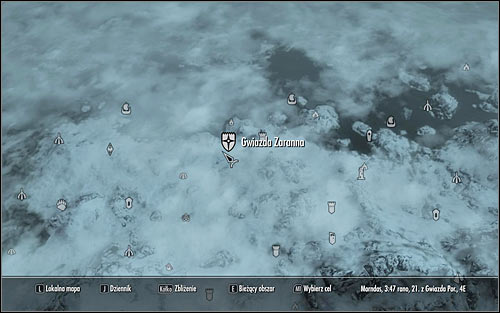 Open the world map and head to the city of Dawnstar, found in the northern part of Skyrim (screen above). If you haven't discovered it yet, it would be easiest to use a carriage, for example the one in Whiterun Stables. 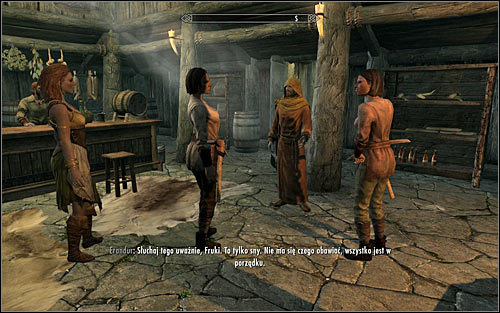 As you reach Dawnstar, locate the Windpeak Inn beside the city entrance. If it's your first visit there, you will see a conversation between Erandur and three women. The will speak of nightmares which bother the citizens of Dawnstar. Don't worry if you missed the conversation previously in the game, as Erandur will tell you about everything anyway. 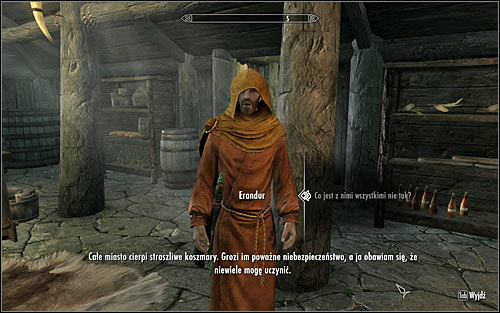 Approach Erandur and speak with him (screen above). He will tell you that the one responsible for the nightmares is the Daedra Prince on nightmares, Vaermina. Erandur plans to stop her and will offer you to follow him to the nearby Nightcaller Temple. Agree to accompany him.

Heading to the Nightcaller Temple 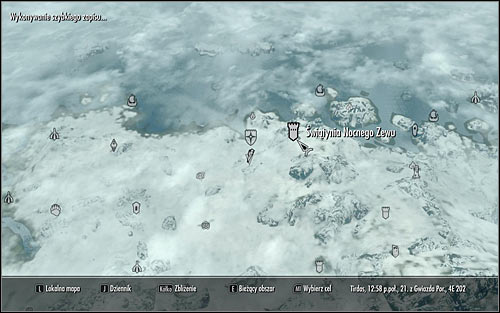 Head out of the inn. The Nightcaller Temple is found east of Dawnstar (screen above) and if you have been there, you can use fast travel. Otherwise you can follow Erandur on foot, especially that reaching the temple will only take you a couple minutes. 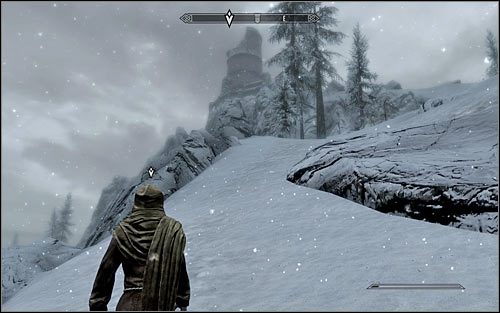 You will most possibly approach the temple from the south-west (screen above). Be careful, as after getting there you will have to fight a group of Snow Bears. You should of course attack them one at a time. If your character prefers ranges attacks, you should most of all keep the animals at distance and don't let them approach you. 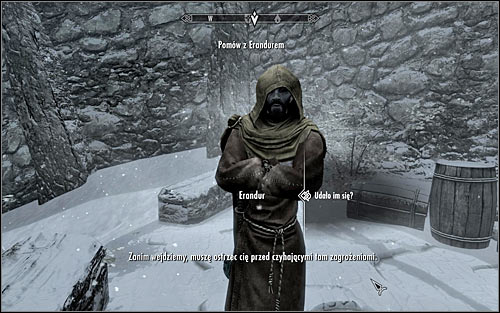 After the fight, head to the main temple entrance. Wait for Erandur to appear and speak to him (screen above). The mage will warn you of the dangers awaiting inside the temple. It's possible that the sleeping Vaermina priests and Orcs will with time return to life, so you will need to eliminate them. 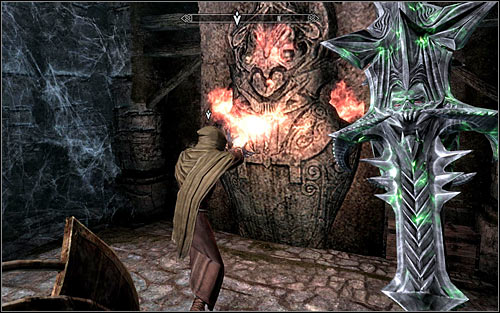 End the conversation and open the door to the Nightcaller Temple. Enter the first big room and wait for Erandur to unlock the further passage (screen above). You can follow him. I'd recommend sticking to him at all times, as you will be able to explore the temple after the quest. Stand by the grates and watch the source of the nightmares - the Skull of Corruption. Unfortunately, reaching it won't be easy. 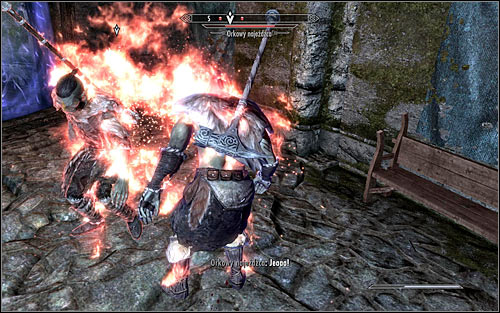 Continue exploring the temple, going down the stairs to the lower level. Soon enough you will need to fight two Orcish Invaders (screen above). During this and all the upcoming battles of this quest, I'd recommend using the fact that the enemies will need a couple seconds to get up off the ground and during that time they are completely defenceless. As a result you should stick with fast and less precise attacks, rather than slow and accurate. 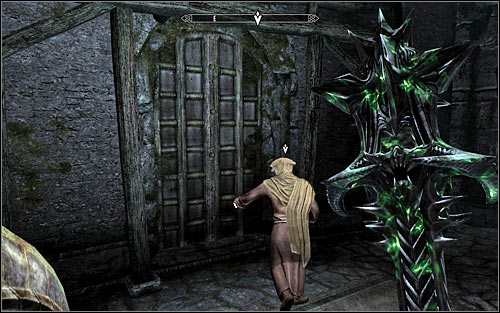 After the battle, listen to another conversation with Erandur, regarding deactivation the magic barrier. The priest will state that you will need to look for the solution in the library and also reveal that he was a Vaermina priest in the past and now wants to pay for his sins (how you react to this fact isn't important). Follow Erandur further, returning to the upper level and heading through the previously ignored door (screen above). 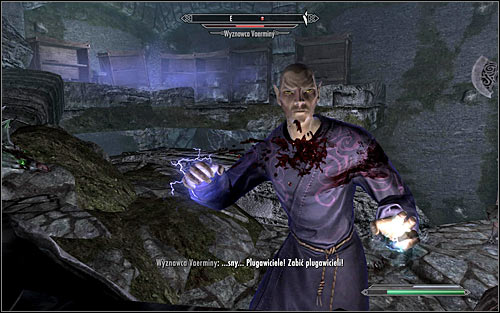 Enter the neighbouring room and be ready for a fight. Personally I'd recommend taking care of the Vaermina Devotee first (this also stays true for all the upcoming battles). These enemies have superior resistance and at the same time are capable of dealing high damage, posing a serious threat. 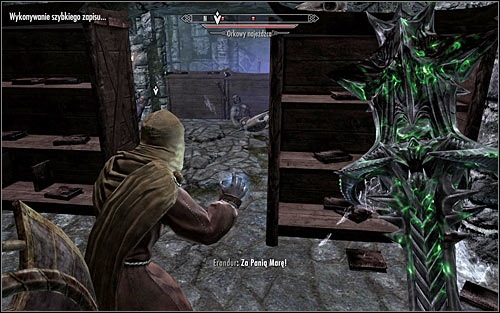 Continue onwards through the library, heading onto the lower level. Look out, as between the bookshelves there are more enemies who should wake up as your approach them (screen above). This time you will have to eliminate two Vaermina Devotees, so you need to be fast. 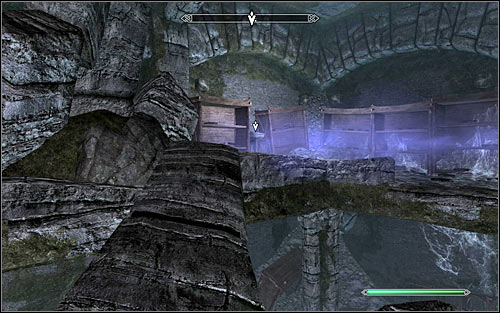 Approach Erandur and initiate another conversation with him. This time the priest will ask you to help him find an alchemy book. Luckily it's a very easy task, as the game will add its location onto your map. Return onto the upper balconies of the library and walk across the bridge to reach the book (screen above). Interact with the Dreamstride and press E to take it with you. 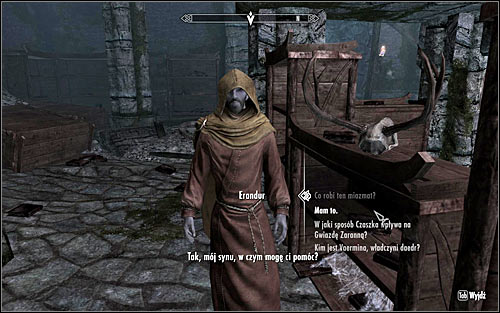 Return to Erandur to give him the book (screen above). The mage will eventually state that there's a way of reaching the inner sanctum by drinking the Vaermina's Torpor. It allows to travel through the real world in dream state. The next step is finding the potion and Erandur will suggest to look around the laboratory. 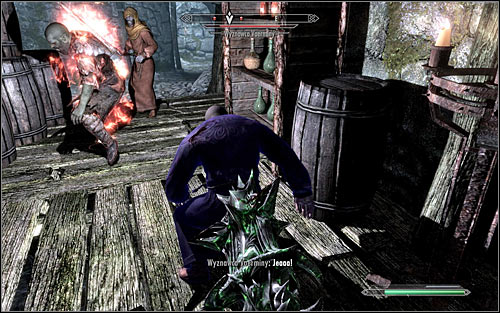 Follow Erandur, choosing the north-west library exit. You need to take into account that on your way you will need to eliminate a new group of enemies (screen above), though the battle doesn't differ in anything from the previous one. More enemies will wake up as you reach the Laboratory and in this case you should remember about both the upper balcony and the lower room.