Quest requirements: This quest can be completed at any time during the game. However considering the multiple demanding mage fight and the very difficult final battle, I'd recommend beginning it only after developing your hero sufficiently. 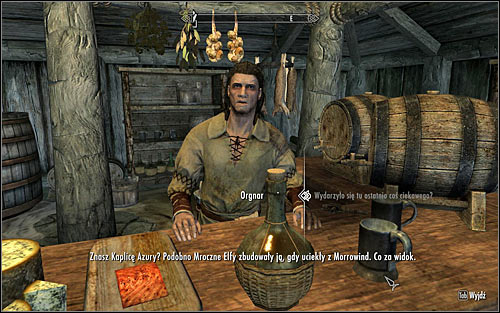 Depending on your liking, you can move to activating the quest at once or spend some time to learn of it officially. In the latter case, head to a tavern and speak with the innkeeper about any new gossip. One of the things you might learn about is the existence of the Shrine of Azura built by Dark Elves (screen above), leading to unlocking Miscellaneous: Visit the Shrine of Azura. 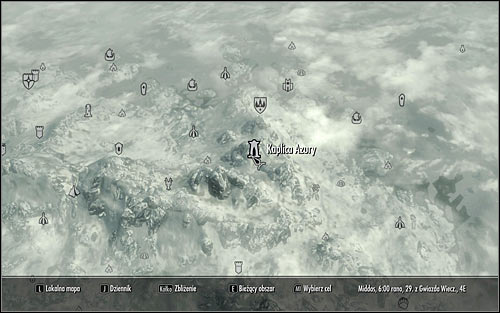 Open the world map. The Shrine of Azura is high in the mountains, in the northern part of Skyrim (screen above). Assuming you haven't discovered that area yet, it would be best to begin your trip at the nearby city of Winterhold and from there head south. 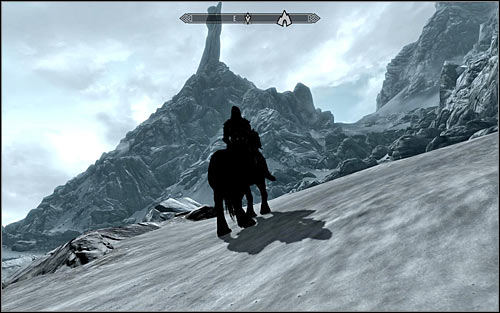 Keep going south and turn west at the first chance. Look out for the wild animals and Frost Trolls on your way, fight them only if your characters is strong enough. I'd suggest approaching the Shrine form the west, choosing the path leading to the mountain top (screen above). 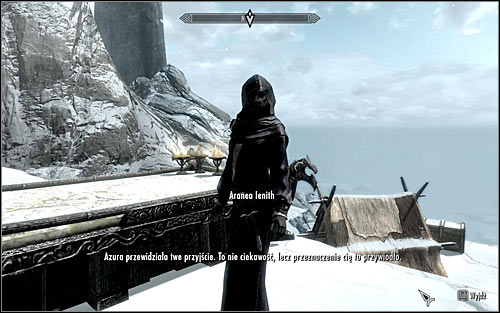 After reaching the destination, approach the large Azura statue and use the stairs. You need to reach the area where Aranea Ienith is (screen above). Speak to her to learn the Azura has foreseen your arrival and has a mission for you. Aranea will send you to Winterhold with the task of finding a certain elven enchanter. 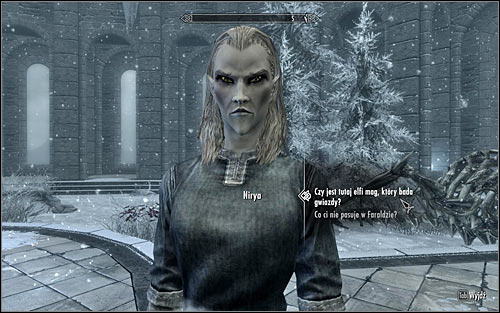 Open the world map and head to Winterhold. The elven mage can be found in a few different ways. If you had already gained access to the College of Winterhold, you can go there and ask one of the mages about the elf (screen above). Regardless of who you ask, you will learn that the person you're looking for is Nelacar, who's at the moment in the Frozen Hearth Inn. 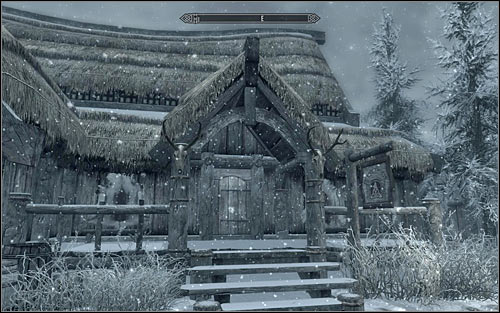 Visiting the College luckily isn't obligatory, as you can just head straight to the mentioned Frozen Hearth Inn in Winterhold (screen above). 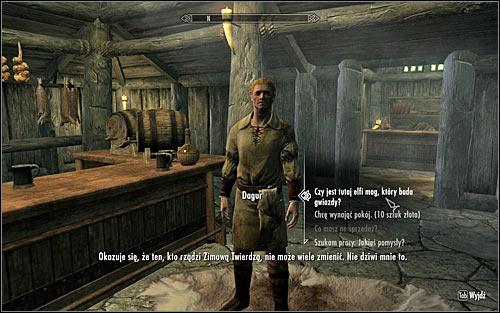 Inside, you should witness a conversation between Nelacar and the innkeeper Dagur, regarding the appearance of a monster in result of a failed experiment conducted by the elf. After they stop talking, approach Dagur and ask him about the mage (screen above). He will send you to Nelacar. 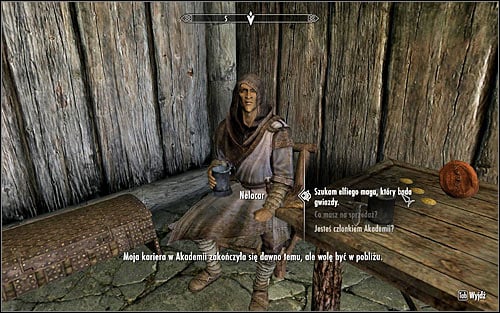 Regardless of the circumstances in which you learn of Nelacar, you will need to find him inside the Frozen Hearth Inn and talk with him (screen above). The mage won't be eager to cooperate with you, though if you have highly developed Speech you can try to persuade or intimidate him. Luckily in case you fail, you can always pay him some gold which is a certain way of making him change his mind. Nelacar will tell you of a special Daedric jewel known as Azura's Star which can absorb any number of souls and won't break. You will also learn of Malyn Varen, who has hidden himself in Ilinalta's Deep and is most possibly in possession of the mentioned artifact. Searching the mage's hideout will of course be your duty. In the end Nelacar will tell you that after finding the Star, you should give it to him instead of returning it to Azura, though you will make the final decision later on. 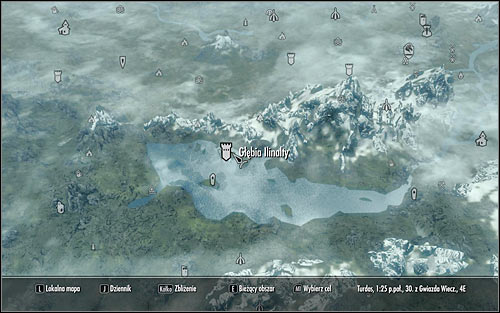 Head out of the inn and open the world map. Ilinalta's Deep can be found in the central part of Skyrim (screen above) and it's a ruined keep beside a large lake. You can get there in multiple ways. I'd recommend beginning in Riverwood or Falkreath, choosing between a quick swimming lesson and a walk beside the lake shore. 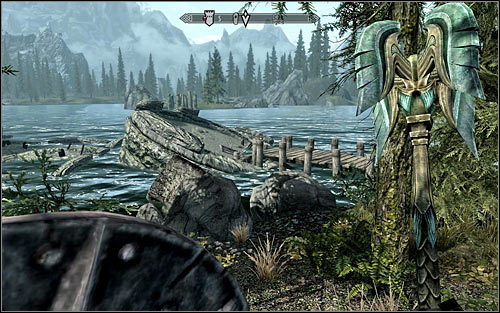 Sooner or later you will reach the ruins of the keep. Head towards one of the partially sunken towers (screen above) and find the hatch which will take you to Ilinalta's Deep. 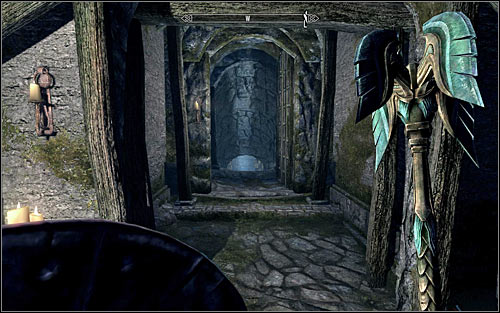 Save your game and head north, going through a small waterfall. Ignore the passage to the next location on the upper balcony, as you will have to explore the whole location to reach it. For now, head west (screen above). 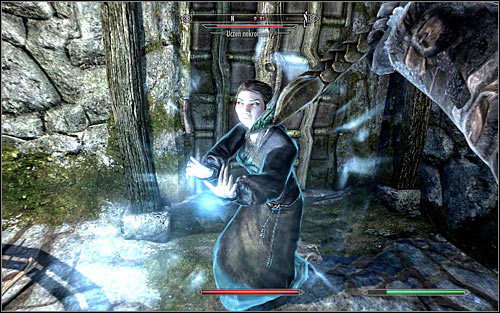 You will encounter the first group of enemies after reaching the north-west room. During this and all future fights, the key to success will be eliminating the enemy Necromancers as fast as possible (screen above). It will, as a result, stop them from not only summoning Skeletons but also reviving themselves. Luckily the first Necromancers will be a bit weaker than the others, though you still shouldn't underestimate them. Personally I'd suggest raising your ice resistance, as most of the Necromancers' offensive spells will be based on that element. 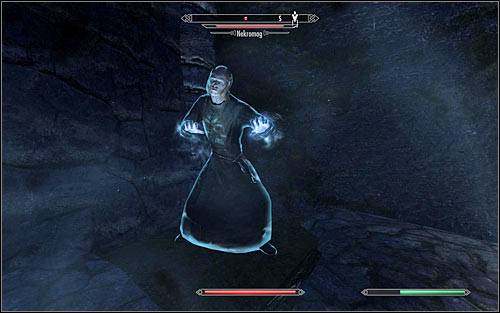 After the battle, take a look around the area, go through the dining room and choose the corridor going north, afterwards turning east. Be careful as you enter the room with a big reservoir, as a Necromage will appear in the distance when you do (screen above). Try to finish him off as fast as possible, as he might summon Skeletons and a Frost Atronach for help.