Quest requirements: The first part of this quest can be completed at any moment during the game. On a side note, it's the only Daedric quest that cannot be missed as it automatically gets activated during the Elder Knowledge main quest (of course if you didn't begin it yourself earlier). The second part of this quest can be completed only after reaching at least level 15. 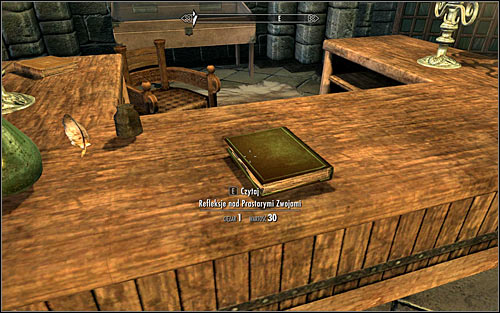 This quest can be activated in two ways. The first one is speaking to Urag gro-Shub as part of the Elder Knowledge main quest. He can be found in the Arcanaeum at the College of Winterhold (northern part of Skyrim) and the quest becomes activated after reaching the Ruminations on the Elder Scrolls received from Urag (screen above). 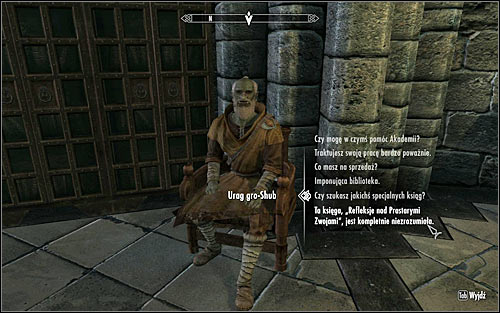 Speak to Urag gro-Shub again to ask him about the Ruminations on the Elder Scrolls written by Septimus Signus (screen above), stating that its author must have lost his mind and that its content is completely inexplicable. The mage will tell you that Septimus has hidden himself in a remote place and you will have to find him. 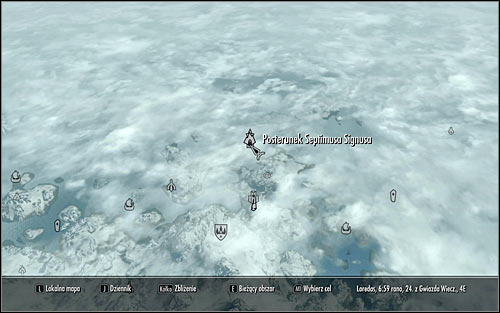 The second way of activating this quest is heading to Septimus Signus even before speaking to Urag gro-Shub. You could therefore complete the whole Daedric quest even before starting Elder Knowledge. Regardless of the chosen option, you will have to find Septimus Signus. In order to reach his whereabouts, open the mage and head to the location marked as Septimus Signus's Outpost (screen above), located north of College of Winterhold. 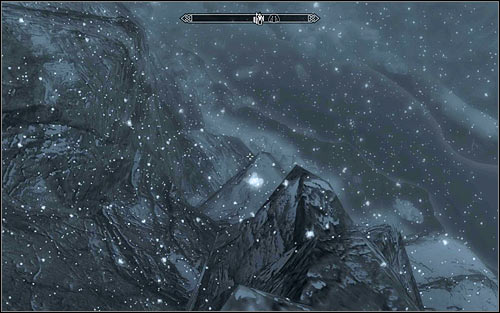 Unfortunately reaching the destination isn't easy. Start off by finding a place from which you will be able to safely slide down (screen above), reaching the coast. After you reach the water, you will just need to head north and ignore a few bigger islands on your way. 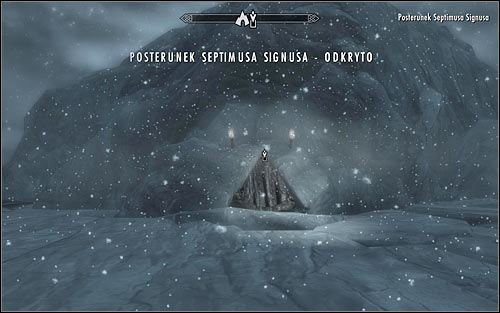 Be careful, as on the way to Septimus you will come across, inter alia, Horkers. If you're having trouble eliminating them for any reason, you can luckily just run away as they shouldn't chase you. Your destination is a location marked as Septimus Signus's Outpost (screen above). Approach the small hatch and get inside. 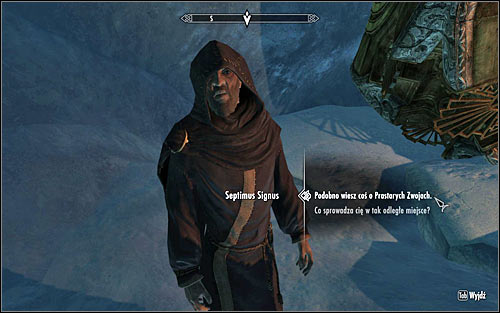 Go forward and after reaching a small cave carefully go down and initiate a conversation with Septimus Signus (screen above). The crazy mage will tell you that the Elder Scroll should be at the Blackreach and ask you to record the contents of the Scroll inside a special dwarven artifact. He will also give you two items required to complete this mission, i.e. the Attunement Sphere, thanks to which you will reach the underground complex and the Blank Lexicon onto which you will transcript the contents of the Scroll. 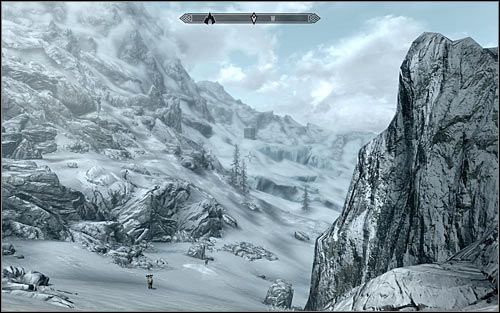 Head out of Septimus Signus's Outpost and open the world map. Your next destination will be Alftand and there's a high probability that you already discovered it. If you can't use fast travel, begin your journey in Winterhold. Leave the city, heading along the main path to the south. Turn west at the first chance. You must of course be very careful throughout the whole trip, as you might come across, inter alia, Horkers and Ice Wolves. You will be able to see your destination from afar (screen above), making it much easier to plan further moves. 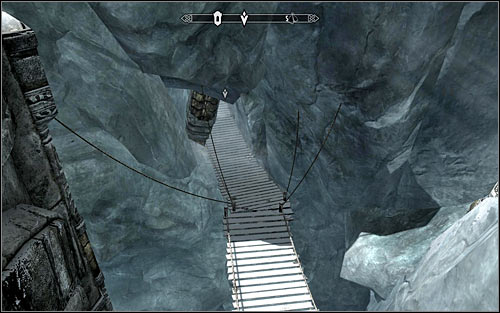 After reaching the destination, you might consider spending some time to examine the ruined buildings, though it's of course completely optional. Your objective is getting through the narrow and treacherous passages and line bridges to reach the Alftand Glacial Ruins entrance (screen above). Save your game and head onwards. In the first phase of the exploration you will mainly walk through linear corridors, so you shouldn't get lost. Ignore J'darr's voice, as you will come across him in a couple minutes. 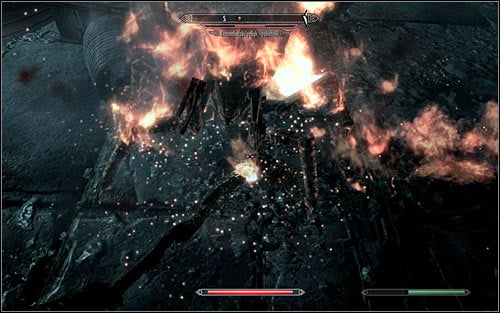 I'd recommend keeping an eye open, especially for the Dwarven Spiders, as pretty much each of them will hold a soul gem. You will come across the first Dwarven Spider Worker very soon (screen above) and overall you shouldn't have any trouble eliminating him. You should just know that the Spiders can attack you both at close and long range. Continue exploring the ruins and be ready to eliminate two more spiders. 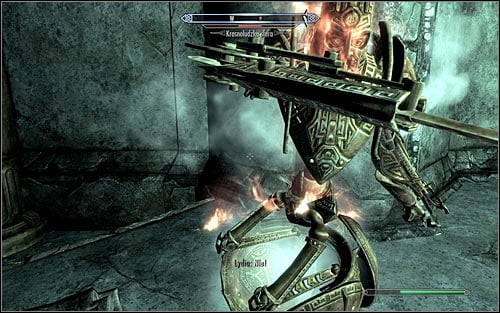 After reaching the northern part of the ruins you will come across J'darr, who will automatically be hostile towards you. After dealing with him, continue exploring the ruins. You will come across a stronger enemy soon enough, in the form of a Dwarven Sphere (screen above). As the machine is capable of dealing considerable damage, you have to be careful if your character has low defence. If you want to try close combat, be sure to avoid the Sphere's stronger attacks. It's a good idea to draw the machine's attention to a party member, so that you're able to plan your attack better. Don't forget to search its remains, as you can find even more valuable treasure than the Spiders left behind. 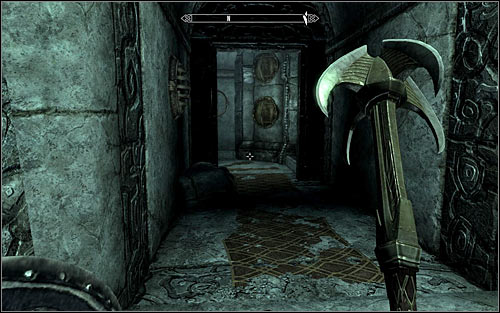 If you want, you can sacrifice some time to jump between the moving machine elements. You would therefore reach the upper ledge, containing a chest with some precious treasures. Otherwise, choose the northern passage (screen above). Be ready for destroying more Dwarven Spider Workers. On your way you should note a small room in the north with a locked gate. Pick the lock if you only can, as there are some precious artifacts to be found inside. 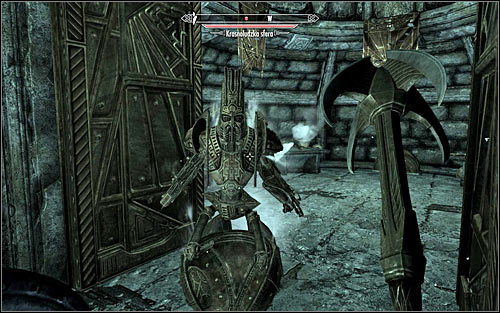 Regardless of whether you explored the northern room or not, you will need to open the gate in the west and continue exploring the ruins. Be ready to attack the two new Dwarven Spiders patrolling this area. The game will let you hack into the locked western room, but I'd recommend doing it only if you don't mind fighting another Dwarven Sphere (screen above). 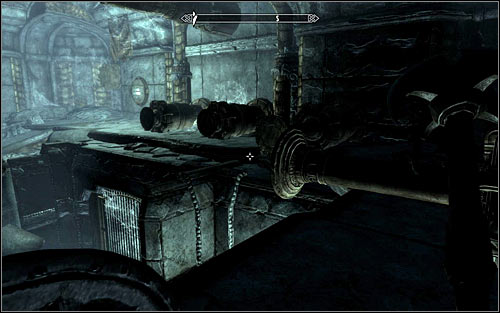 Head south, eliminating a Dwarven Spider on your way and afterward go east. Note that you are now above the previously visited room and have to look out for the machinery (screen above), as you can get pushed down and have to go through the same location again. Eliminate two more Dwarven Spiders and reach the gate leading to the Alftand Animonculory. 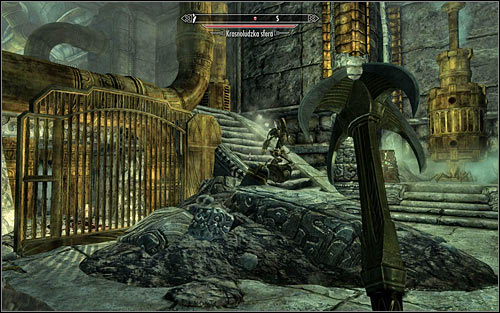 Head east. On your way you should explore all the nooks and recesses, searching for valuable items and chests which you can picklock. Open the big gate and be ready for a difficult battle. Above all, you will be attacked by another Dwarven Sphere (screen above), so try to maintain any precautions. That's not the only problem however, as soon enough Dwarven Spiders will appear as well. After getting rid of them all, explore the area and go up the stairs onto the upper level. 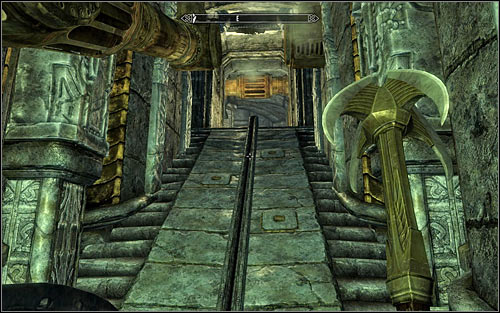 Continue going east and carefully approach the upward ramp (screen above), as touching any of the three pressure plates will activate a hard to avoid trap. Deal with the next Dwarven Spider and use the lever, thanks to which you will be able to enter the large, multilevel room. You can also explore the western corridor (Dwarven Spider and ac chest with precious treasures), or choose the path leading to the lower level. 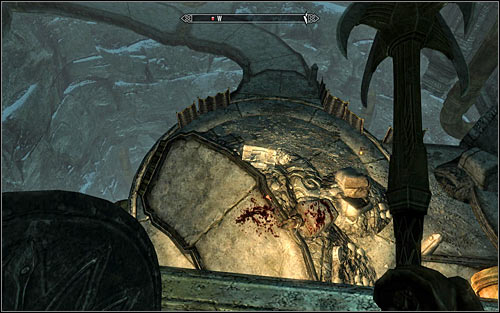 After reaching the lower level and dealing with a Dwarven Spider, you will need to make a decision. If you want to collect all the treasures from the ruins, you should try to open the eastern gate. Eliminate the Spider and check one of the corners, picking another lock. Inside the new room you should find a few chests with precious artifacts and The Locked Room, boosting your Lockpicking skill. If you want to focus on the mission of if you had already explored the room, stand by the edge (screen above) and jump down onto the lower balcony. 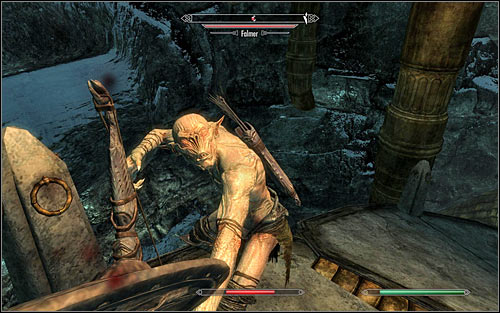 Destroy the Dwarven Spider and head along the ramp onto the lower level. On your way to the next location you will encounter the monsters known as Falmers (screen above) for the first time. You need to be very careful, as they're far more resistant most humanoids that you encountered until now. Falmers can represent one of three professions (warrior, mage and archer), so you will have to modify your tactic depending on which you come across. Don't forget to check their bodies afterwards, as you can find some precious items in most cases. Also note that there's an easy way of eliminating the Falmers in this location, using the Unrelenting Force to knock them back, causing them to die from falling down. Just be sure not to use it on a member of your own party. 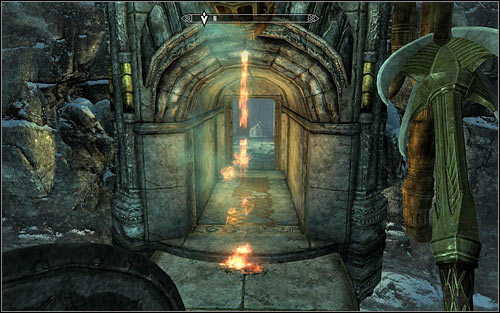 Get to the very bottom and be careful not to touch and line on your way, as it would activate a pretty nasty trap. Your objective is reaching the corridor with the fire trap (screen above). Wait for the trap to switch off and use the Whirlwind Sprint or quickly run to avoid damage. Afterwards you will have to get through multiple room, eliminating groups of Falmers. Remember to make use of the Shouts and attack the monsters one at a time. Also keep an eye on your party member, as he can easily die here. The second room also includes flames, but you can just head back to the previous corridor and don't worry about them. 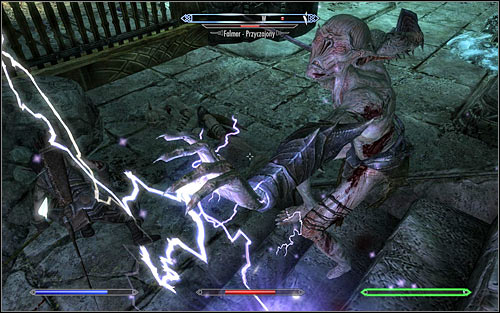 Choose the south-west corridor and be ready for some more Falmers. Try to eliminate the Falmer Skulker (screen above) as fast as possible, as he can use magic and can deal more damage than the others. Ignore the lever and head south-east, reaching another big gate.