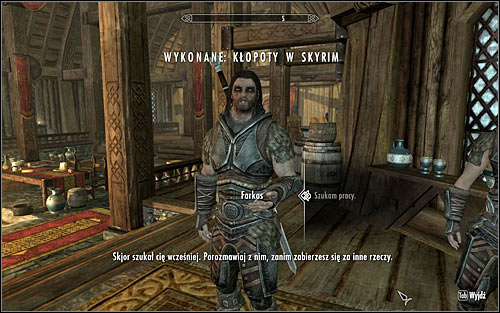 In order to activate this quest, you have to complete major quest Proving Honor and then at least one of sidequests ordered by Farkas, Aela, Vilkas or Skjor. Right after completing the sidequest, return to its giver and ask him about other orders. You'll be then sent to Skjor, who has something important to talk to you about (screen above). Note - if it is Skjor who ordered you a sidequest, you do not have to look for him of course and you'll get all details on next major Companions quest right away. 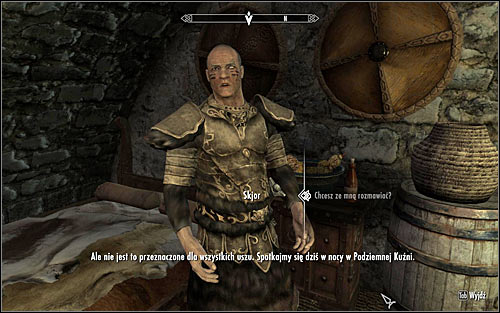 Depending on time of the day, you can find Skjor in the main chamber of the Jorrvaskr sanctuary or in the living quarters in Jorrvaskr. During the conversation, the shield-brother will ask you to meet him after nightfall in the Underforge (screen above). 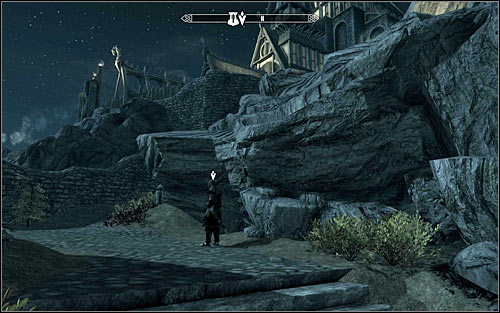 Leave Jorrvaskr and in accordance to Skjor's request, wait for the night using sleep option if needed or speeding up the time. Head to the previously visited Eorlund's forge, located north from the sanctuary. Skjor should wait for you near rocks on the lower level (screen above). 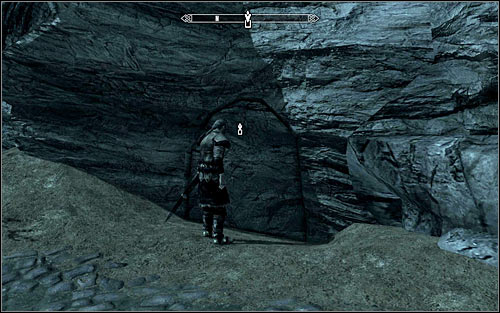 Use the same hidden rock passage as Skjor (screen above), getting to the Underforge. Do not be scared of another werewolf, because it is Aela in her lupine form. Skjor will tell you more about this gift (or according to some, the curse) and keeping this in secret from Kodlak. The shield-brother will tell you that in order to complete a process of joining Companions, you have to drink wolf blood too. Of course you do not have to agree to do this, but if you refuse to accept wolf blood, you won't be able to continue this quest. 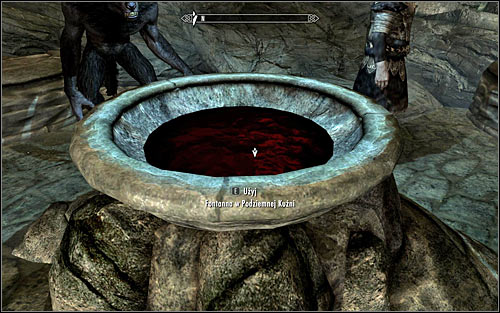 Skjor will start a ritual after a while. Go to the font in the Underforge (screen above) and interact with it. You'll face now quite interesting scene, where you'll be transformed into werewolf. Do not worry, that you don't have any new objectives yet, because it is just short tutorial to familiarize you with the lupine form. After a while the screen turns dark and you'll continue to a next part of this quest. 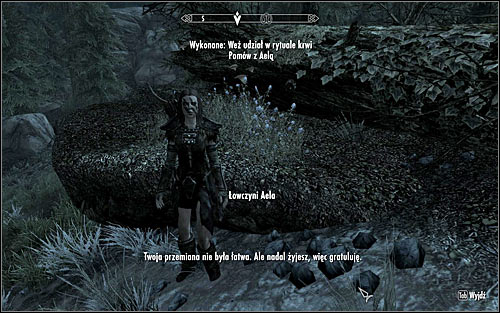 You wake up in a different location, near the Gallows Rock. You'll notice that your character has no armor elements, because they are automatically removed while transforming into werewolf. Initiate a conversation with Aela (screen above), who is glad hearing that your first metamorphosis was successful. She will also tell you that to celebrate this event you will attack the Silver Hand encampment (this is the organization of werewolf hunters). Before starting the attack you might ask Aela about details of being werewolf, but she doesn't know too much about getting rid of this "curse". 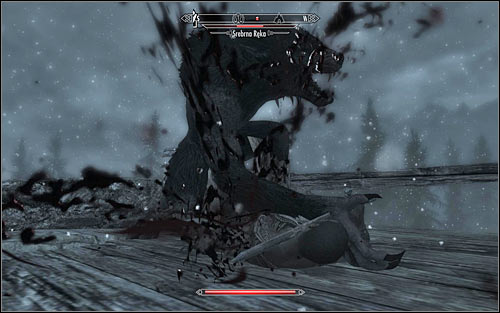 First you have to deal with three werewolf hunters standing next to the Gallows Rock. If you want to transform into werewolf here, then press TAB key, select Magic, go to Powers section and activate Beast Form power. Elimination of local enemies shouldn't be difficult (screen above), but you should remember about limitations of described power. You can stay in the lupine form at maximum few minutes, but this process can be extended thanks to drinking enemies' blood. What's more, you can turn into werewolf only once a day. So you should think if you want to use this power right now or leave it for later. 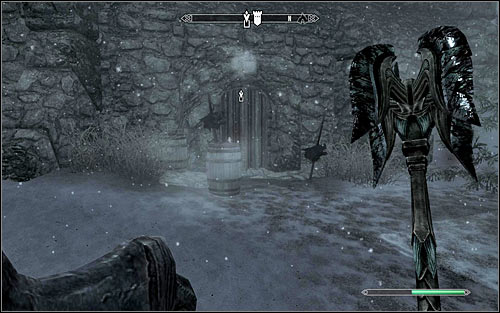 If you want to eliminate werewolf hunters in a traditional way, that before doing any actions don't forget to put on all armor elements and weapons used before. Only after that join the fight. Whichever method you've chosen, you have to use the door leading inside the Gallows Rock (screen above). 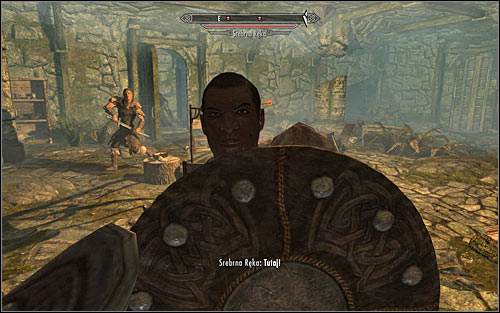 Once you get there, listen to a short Aela's speech and then interact with the chain. Head south, going down the stairs to the lower level. Watch out for Silver Hand members, which you'll encounter next to a fireplace (screen above). You could try to surprise them, so you can eliminate them easier. After the battle look around, and open the southern door (the western door is closed). 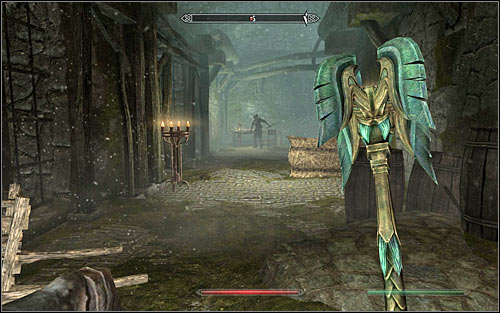 After a while you'll encounter few skeevers but they are no challenge for you. Use the large stairs and prepare yourself because in a chamber with cages you'll encounter a group of werewolf hunters (screen above). Watch out also on a pressure plate on the ground and do not step on it incidentally. After the fight you can look around. One of the imprisoned here werewolves should be still alive, but even if you open his cage with lockpicks, he will attack you anyway. 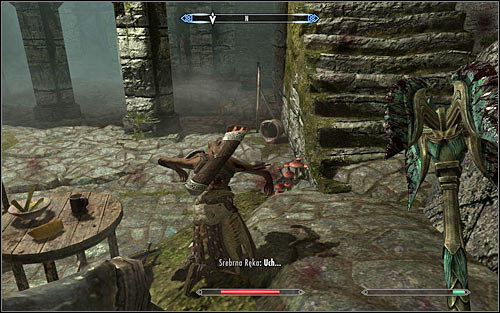 Head west now, going down the stairs to the lower level. In the next room you'll encounter more Silver Hand members (screen above) and I suggest eliminating bowmen first. Look around and explore this area, finding two chests with valuable items (one of them is masterly locked) and One-Handed skill book Ancient Tales of the Dwemer, Part III: The Importance of Where. 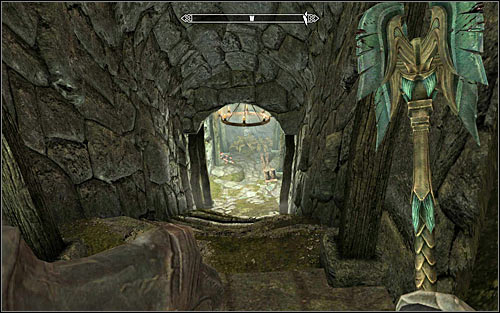 After picking up all things, locate a passage in the north-western part of the chamber. Explore the next room and you'll find a Smithing skill book The Last Scabbard of Akrash. You can also try to open a nearby door, but there are no rare items a small room behind it. Choose a narrow stairs leading west (screen above). Aela will warn you, that you're approaching the Silver Hand leader hideout. So it would be wise to save your game here. 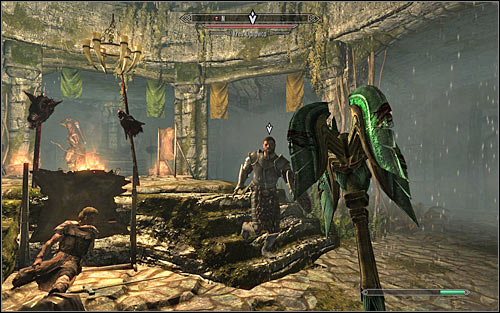 After reaching the last room, try to deal with standard hunters first and then start attacking Krev the Skinner (screen above). I personally do not recommend attacking him as a werewolf, because his blows inflict huge damage. So playing as a werewolf is better for offensive than defensive actions. You should use the fact that your opponent is not very agile and ask Aela to get his attention. Fight until Krev is defeated. 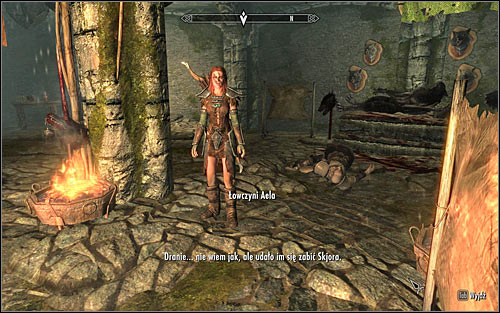 Deal with the rest of Silver Hand members (if they're still alive) and then look around the room. You should of course examine Krev's corpse, picking up a valuable Orcish War Axe of Burning. You can now come to Aela (screen above). You'll see dead Skjor, who has been killed in his solo attack on werewolf hunters' hideout.

Unlocking the next quest, Blood's Honor, will be possible only after completing two Companions sidequests, but only mission obtained from Aela count. In order to obtain first of them, you should talk to Aela right now, staying in the Gallows Rock. The easiest way to exit werewolf hunter's hideout is to choose the eastern corridor and reaching the door with an interactive bar.