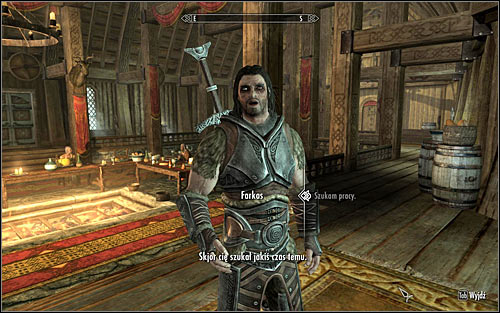 In order to activate this quest, you have to complete major quest Take up Arms and then at least one of sidequests ordered by Farkas, Aela, Vilkas or Skjor. Right after completing the sidequest, return to its giver and ask him about other orders. You'll be then sent to Skjor, who has something important to talk to you about (screen above). Note - if it is Skjor who ordered you a sidequest, you do not have to look for him of course and you'll get all details on next major Companions quest right away. 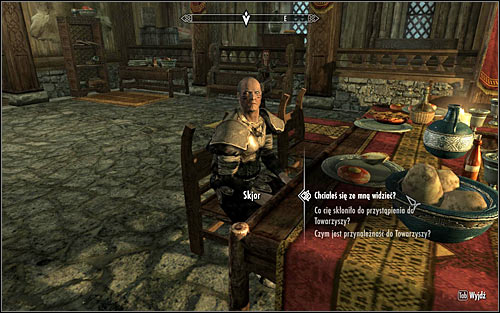 Depending on time of the day, you can find Skjor in the main chamber of the Jorrvaskr sanctuary (screen above) or in the living quarters in Jorrvaskr. The warrior states that it is time for your last test before officially joining the Companions clan. You have to find fragment of Wuuthrad. It is worth noting that you'll be accompanied by previously met Farkas. 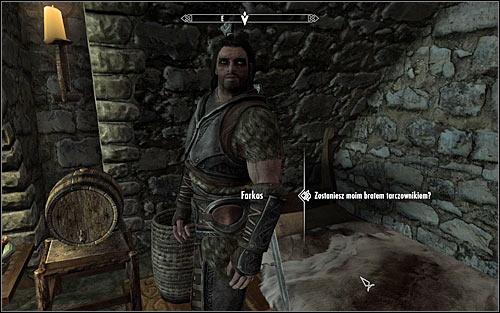 Find Farkas and start conversation with him (screen above). Depending on your preferences, you can start your journey right away or ask the shield-brother few additional questions. You might learn that Wuuthrad is very powerful weapon and that fragment of this artifact must be found in a place called Dustman's Cairn. Note - if you were teamed with someone before starting this quest, (s)he will be automatically detached from your team and send to a default location, where (s)he will be waiting for you (Lydia may be moved to Dragonsreach or your home in Whiterun). 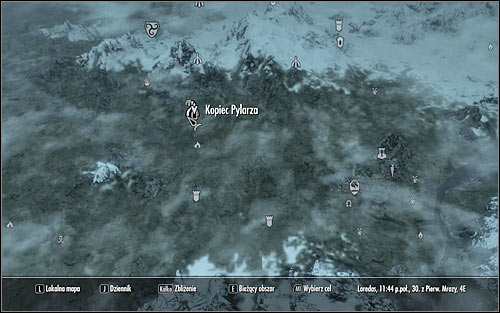 You can leave the sanctuary now and open the world map. Your target is Dustman's Cairn, located west from Whiterun (screen above). If you've already discovered this location then it is best to use fast travel option. Otherwise I suggest getting there by following main path leading west and turning north after reaching Fort Greymoor. 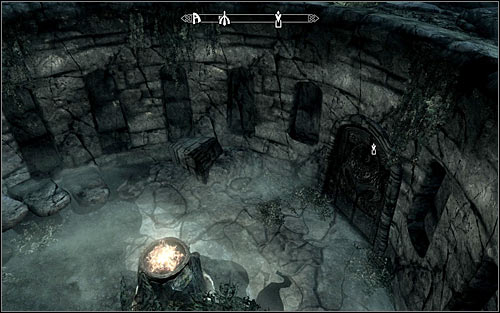 Once you get to the place marked by the game, walk on the hill and find a characteristic large hole in the ground (screen above). Make sure, that there are no monsters in the area, jump down and use the door leading to the underground complex. 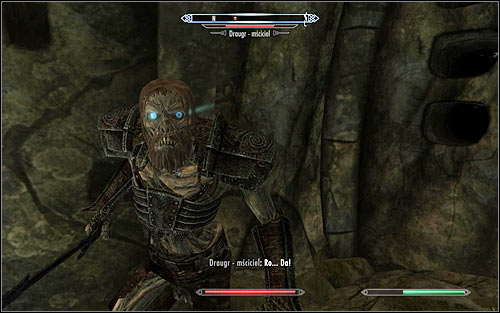 Head east. It the first room you'll find valuable items with Two-Handed skill book, Battle of Sancre Tor, among others. Use the eastern corridor. After reaching catacombs you'll encounter monsters - different types of draugr. You should particularly watch out for restless draugr (screen above), because he is more tough than others and can inflict more damage. He can also cast powerful spells. 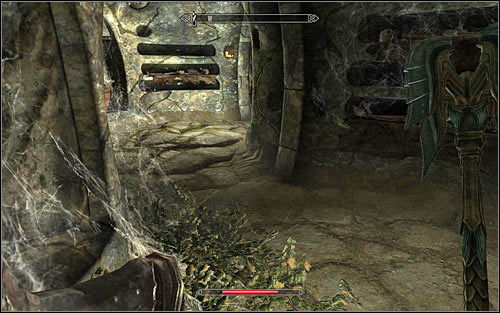 Before further exploration of this location, you should know one thing. In some of graves on your way, you'll see laying draugr and you can locate them by specific sounds. These monsters shouldn't attack you, unless you use any area effect skill. But you can also eliminate them, even for improving your own skills. Continue exploration, choosing the northern corridor (screen above), leading to the door. 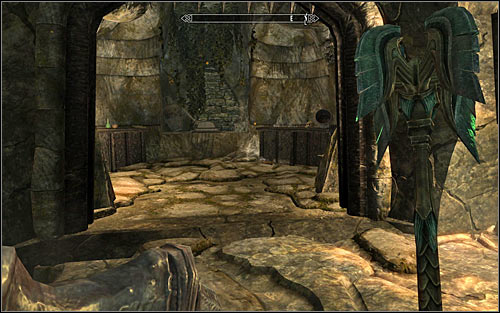 Go east and after a while you should get to larger chamber. You might of course look around here. After that, go to the north-eastern part of the room (screen above). Pull a lever, which closes local grate. But as you can see in a distance, south-eastern passage is now unlocked. 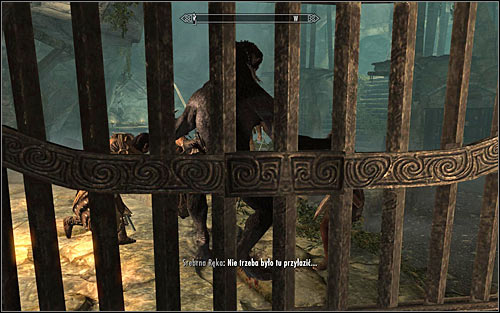 You'll face now quite interesting cutscene, with Farkas and members of a group called Silver Hand, hostile to Companions. During the cutscene Farkas transforms into werewolf (screen above) and deals with all opponents in very effective way. After the fight you'll be able to ask your ally few questions (do not worry - you'll learn MUCH more about werewolf transformation soon) and use the south-eastern passage mentioned before. 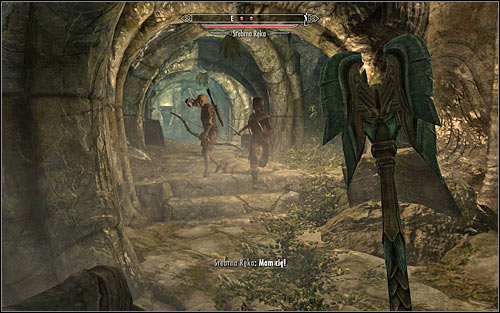 You have to reckon with the fact, that from now on you'll quite regularly encounter Silver Hand members (screen above). A good idea is rapid elimination of these enemies, who are less tough and die after few blows. Turn east and then turn north, reaching two doors. After opening them you'll find yourself in another large chamber. 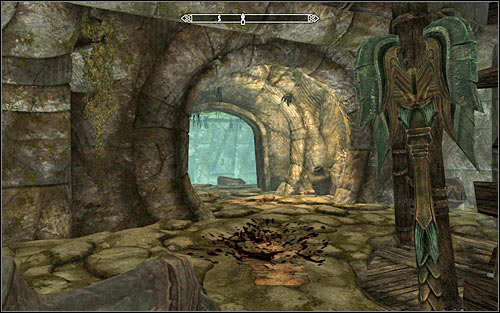 Also here you'll have to fight Silver Hand members and I suggest dealing quickly with a bowman on the upper level. Look around the room, because you can find here a masterly secured chest with very valuable items. Finally, choose the southern passage (screen above). In the next room go down the stairs and head towards the southern door. 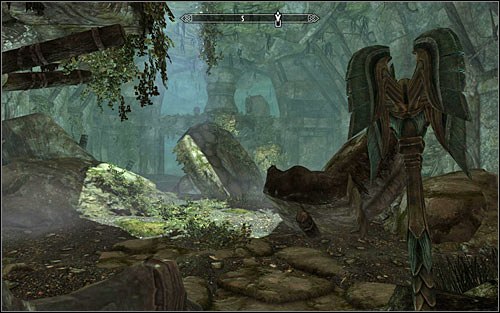 You will pass quite linear corridors now, but you can meet on your way, both new members of Silver Hand, and new draugr. Soon you'll reach a larger chamber (screen above) and it will be necessary to eliminate a group of quite tough Silver Hand warrior. Do not let opponents surround you and do not forget about at least one bowmen attacking you from a distance. 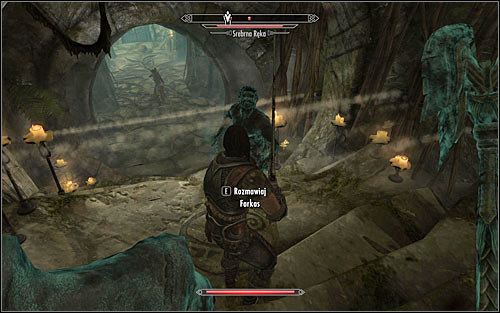 After winning the fight, choose southern door and then turn west. Watch out for a pressure plate on the stairs, which triggers a trap with poisoned arrows. You can use this trap for your advantage and press the plate when next Silver Hand warriors attack you (screen above). After the fight, head to the door leading to the Dustman's Crypt. 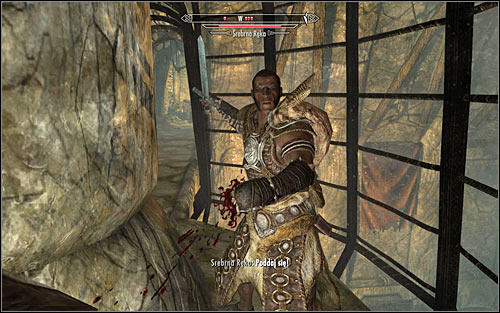 Once you get to a new place, a Silver Hand warrior will attack you. Eliminate him and go to the next chamber, reaching some kind of bridge. You can attack enemies downstairs now or run there or just wait until they come to you (screen above). I personally suggest the latter variant, because it will be easier to attack single targets in narrow corridor or use the Shout Unrelenting Force. Watch out though, because some of enemies (full plate warrior for example) are much tougher and more efficient in fight that others. 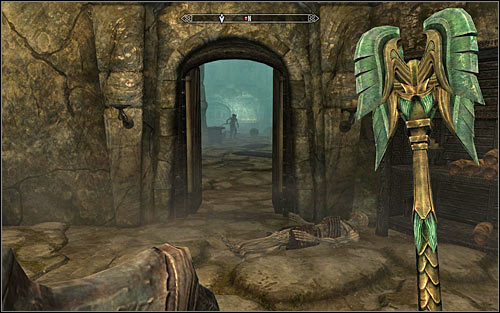 Whether you've already fight your opponents or you're going to do this, you have to go west, moving opposite clockwise. On your way there you'll encounter a closed door, but there are no valuable items behind it. After a while you should get back to the main chamber, but on the lower level (screen above). If there are still any opponents or you haven't fought them yet, you have to eliminate them now. 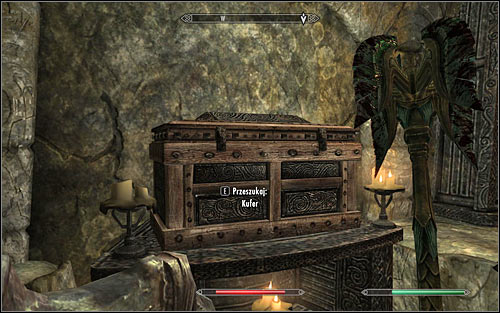 After the fight, look around for a chest (screen above), where you can find a Dustman's Cairn Key among other things. Use it to unlock the northern gate. You can go further. You'll be attack by skeever on your way, but he is not a challenge for you. After reaching the room witch alchemic lab, you can look around a little or continue your walk east. 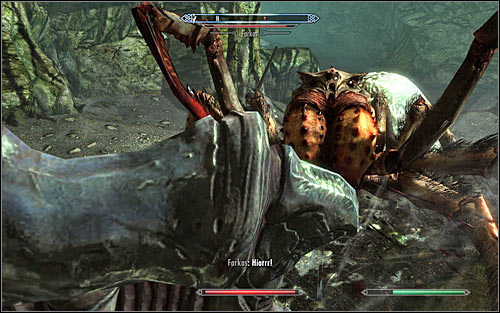 Be very careful, because after getting inside a small cave you'll be attacked by frostbite spiders, leaded by larger and stronger giant frostbite spider (screen above). After winning the fight use antidotes if needed and head north. Prepare to eliminate new draugr and again watch out for a restless draugr. 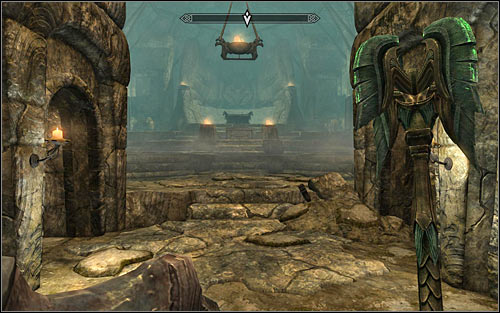 Pass through caverns and choose a western corridor. Further way is linear and soon you'll get to the largest and most important chamber in this location (screen above). I strongly recommend saving your game here, because you'll fight a toughest battle in this quest in few moments. 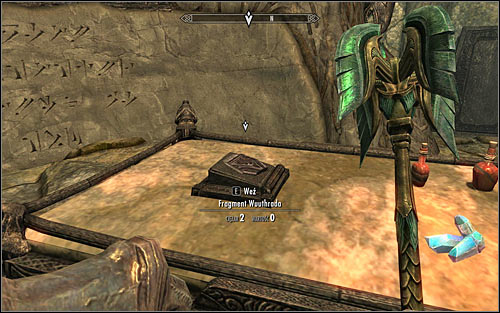 First I suggest walking to the Word Wall, so you can learn a new Word of Power - Fire Breath. You can also pick up some cure potions. Finally collect the Wuuthrad fragment marked by the game (screen above).