It is best to join Companions, an organization which resembles a traditional warrior guild, at the very gameplay beginning. It is especially important if you control a warrior, and that is because completing all Companions quests will not only allow you to greatly improve your skills, but also allows collecting valuable elements of your equipment. There are not too many quests, so it won't be as time-consuming as for example cooperation with the Dark Brotherhood or the Thieves Guild. 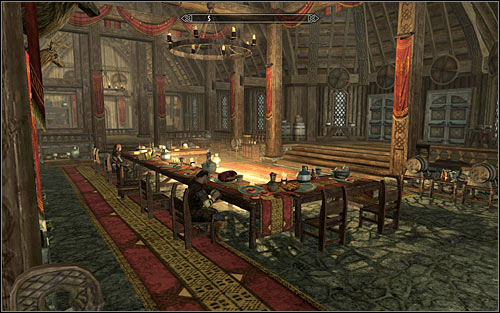 The main headquarter of described fraction is located in the Jorrvaskr sanctuary (screen above) in Whiterun, which you've previously visited. This property is generally available, so you can explore it in details at any time during the game. It is worth to visit Jorrvaskr not only to discuss about main Companion quests, but only to start some minor tasks. You can also rest here or talk to other fraction members. It is worth mentioning, that some of them act as coaches, allowing you to improving your skills.