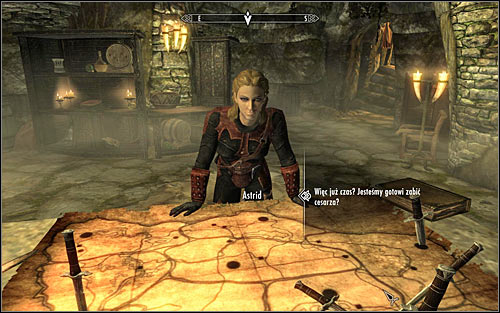 Return to Astrid and ask her about details of the most important contract (screen above). A plan is to go to the feast organized by the emperor, claiming to be Gourmet, killed in one of the previous quests. After getting to the closely guarded Castle Dour zone, you'll have to assassinate the emperor. Astrid will suggest at this point, that it is best to poison one of the meals. She will also give you a Jarrin root needed to accomplish this task. 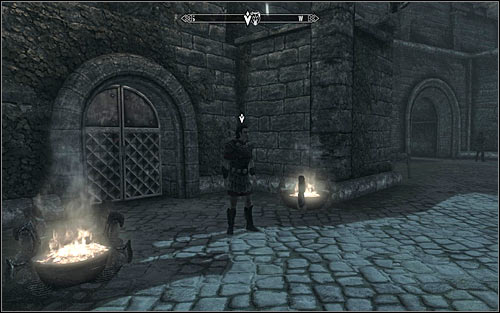 Leave the Dark Brotherhood's Sanctuary, open the world map and decide to go to Solitude. After reaching the destination, head to the Castle Dour, located in the northern part of the city. Find commander Maro there (screen above) and approach him to start a conversation. Maro doesn't want to let you in, but he will change his mind after showing him the Gourmet's Writ of Passage. 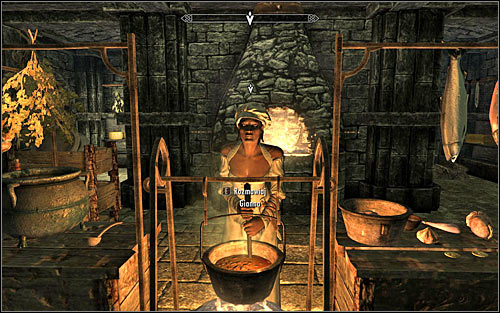 Use the door leading to the Castle Dour location named Emperor's Tower. After getting inside the castle, head south looking for a kitchen. Start a conversation with Gianna (screen above) to inform her that you're Gourmet. Before you can continue, she will ask you to put a chef's hat. 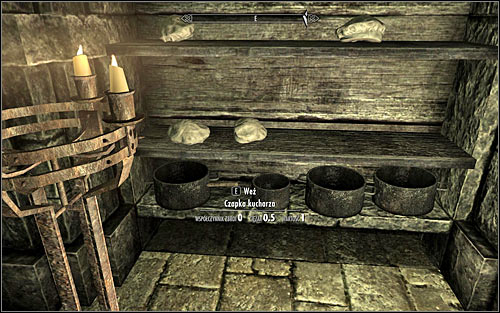 Turn left and pick up a chef's hat from one of the shelves (screen above). Open your inventory and replace your current headgear with a new obtained hat. You can now return to Gianna, who will tell you that the emperor has ordered Gourmet's signature dish - Potage le Magnifique. 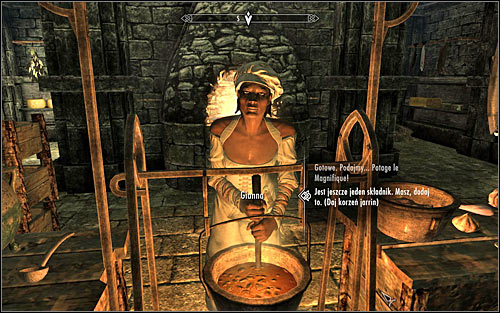 Since Gianna doesn't know the exact method of preparing the dish according to the Gourmet's recipe, she will periodically ask you for ingredients. It doesn't matter whether you choose to select ingredients from the list or stay silent, because the dish will be prepared anyway (in the first case you can count on some humorous elements). At the end Gianna will ask you if you want to add anything to the dish. So if you want to poison it with a Jarrin root, you have to select the bottom dialog option (screen above). Do not worry if you accidentally select wrong answer, because you'll be able to get rid of the emperor in another way. 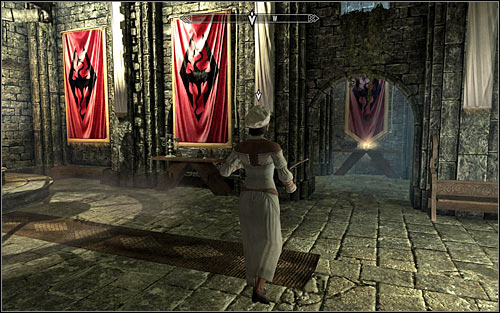 According to the name of this objective, wait until Gianna pours the soup to a stew pot, move away and then follow her (screen above). She will carry the dish to the dining room located on the floor, where the emperor and his guests are feasting. 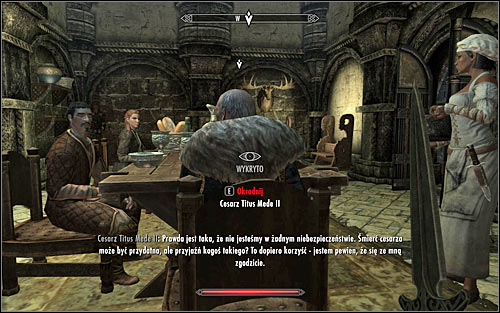 You can eliminate the emperor Titus Mede II in two main ways. If you haven't poisoned the soup or you just do not want to wait, until he tries it, then you have to assassinate him personally (screen above). This solution has one, major disadvantage - you'll be attacked by all local guards immediately. 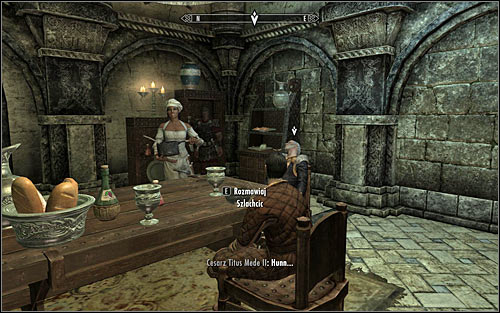 If you've poisoned the emperor's soup, you should wait until Gianna puts a pot down and the emperor starts tasting the dish prepared by Gourmet (screen above). I suggest staying next to the narrow passage at the back of the room and proceed with further actions as soon as the emperor is poisoned. 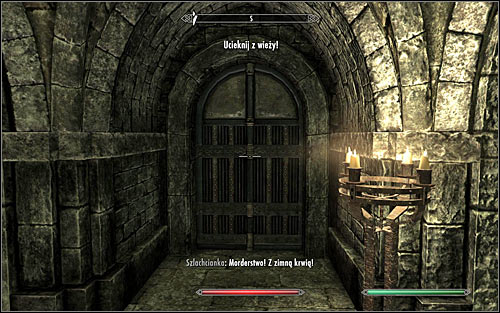 Regardless of how you eliminated the emperor, you have to use the door in the southern part of the room as soon as possible (screen above). They will be unlocked exactly when the emperor is dead. As I mentioned before, it is much easier if you've poisoned him, because in such case you can just wait next to the door and do not worry how to get there after successful assassination. 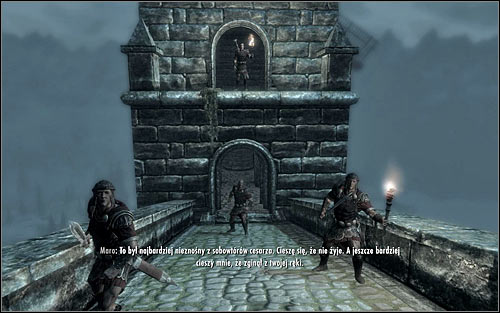 You should find yourself on the large bridge. Move forward. After few moments commander Maro will stand on your way (screen above). He will give you rather surprising information: you not only didn't kill the real emperor, but also have been betrayed by one of the Dark Brotherhood members, who traded you in return for leaving the organization in peace. Maro, however, has other plans, because apart from killing the main character, he also wants to destroy the Dark Brotherhood as a revenge for assassinating his son. 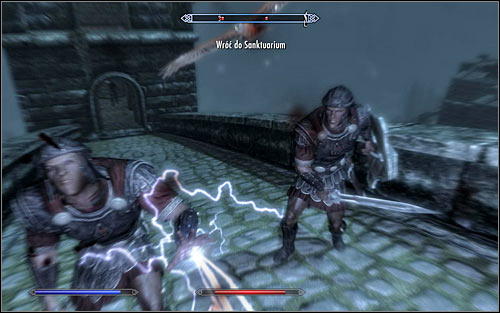 Be prepared, because after end of conversation with Maro, you'll be forced to eliminate group of Penitus Oculatus agents (screen above). You might use the Shout Unrelenting Force, so they will be thrown away and die immediately or become at least easy targets. 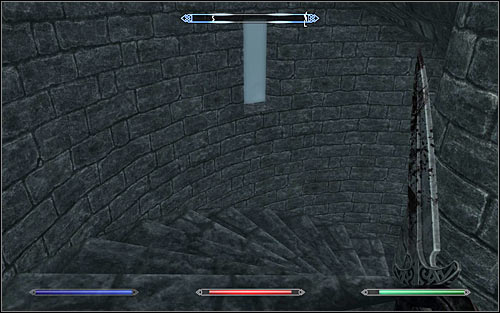 You should quickly deal with mentioned opponents, because Solitude guards among others are coming to get you. When you win the fight, run inside the tower and go down the stairs (screen above). If you're fast enough, you won't meet anyone along your way. Otherwise you'll encounter new opponents and you can start fighting with them or try to bypass them. Keep running down the stairs until you reach an exit from the tower, being automatically moved outside Solitude. 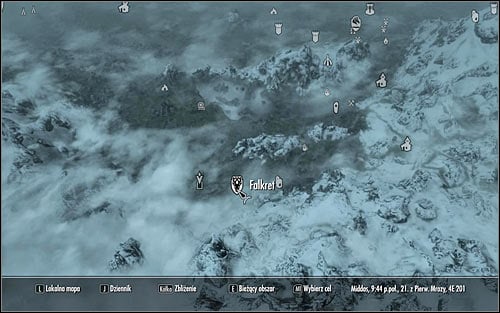 I suggest focusing on getting away from Solitude, because for the reason that you are pursued, you can't use fast travel option right now. Optionally you can also run up to one of the Solitude guards and pay a fine or go to the jail, because in the near future you'll be forced to return to this area. Open the world map and note that you're unable to move directly to the Dark Brotherhood's Sanctuary because this location is temporarily inactive. So I suggest traveling to Falkret, which is located directly east from the sanctuary (screen above) and then walk or ride horse to your destination. This quest ends when you approach an entrance to the Dark Brotherhood hideout.