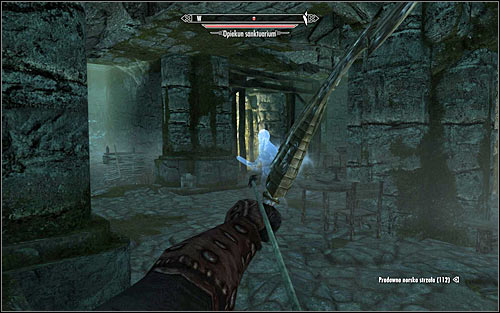 Head north. Once you get to the first room, you might be interested in valuable jester items lying on the table, although only jester's hat is better part of an armor received earlier from Astrid. You'll encounter first enemies, sanctuary guardians, in the next location (screen above). You can use standard weapons to eliminate them, but they are very tough and inflict heavy damage. If you want, you can summon ghostly helper, using the power unlocked after completing one of the previous quests. 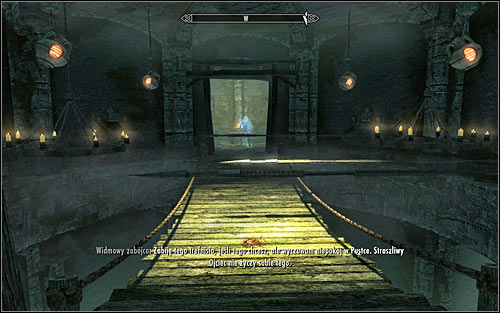 Head towards the western passage, reaching the drawbridge (screen above). I recommend attacking the guardian visible in the distance, provoking him to come to this place. He should be killed upon a contact with one of the spears. You can avoid spears in two main ways: walk carefully between them, stopping often or use the Shout Whirlwind Sprint. 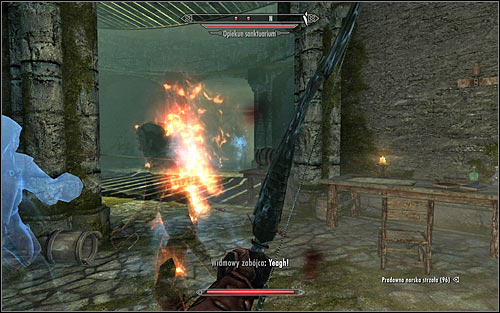 I recommend destroying from the distance oil lamps attached to the ceiling (near the bridge) and then quickly run down the stairs, so at least some of new guardians will get injuries from fire (screen above). Deal with all opponents and look for the skill book Fire and Darkness, increasing One Handed skill. You can now choose the northern exit from this room and then turn east. 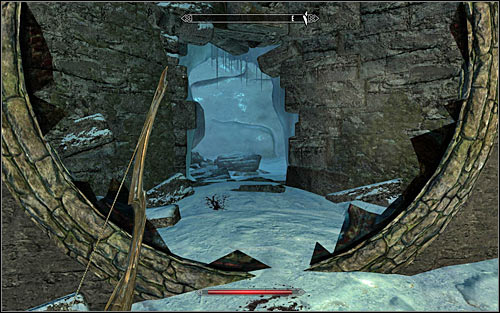 Be careful, because there is another group of sanctuary guardians to eliminate in the next room. After the fight, ignore all the doors because they are locked. Instead use the north-east passage (screen above). Follow the ice corridor and be ready to disarm at least two bear traps along your way. 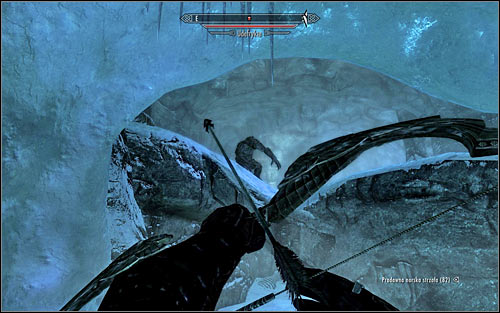 After getting to the largest part of the ice cave, you'll be forced to fight a monster named Udefrykte, resembling in many aspects a snow troll (screen above). I advise to keep him at the distance if possible, unless your character is capable to inflict serious damage in melee combat and armed well enough so you do not have to heal yourself all the time. You can use of course the Shout Unrelenting Force, so the beast can be knocked down and thus become an easy target for your attacks. 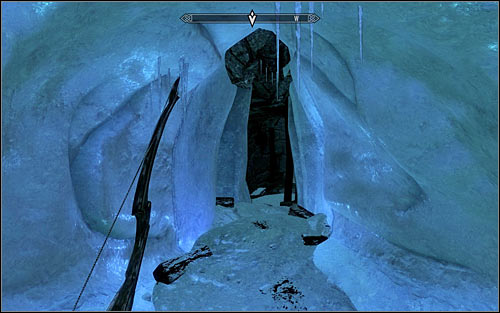 Fight until you defeat the monster. You can now explore the cave. After that, use the narrow south-west passage (screen above) Open the gate and pull the chain, unlocking an access to the tombs. 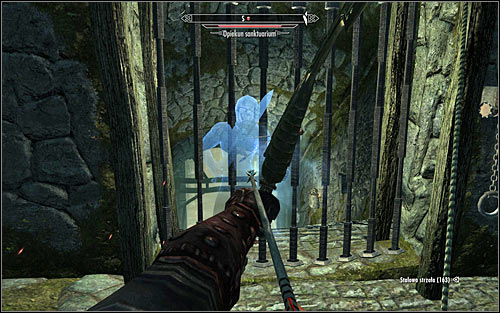 There are many large groups of sanctuary guardians to eliminate in this area. You can fight them in melee combat or use a trick and return to the chain you've used previously. The advantage of this solution is that creatures won't be able to get through obstacles, making them very easy targets for attacks from a distance. 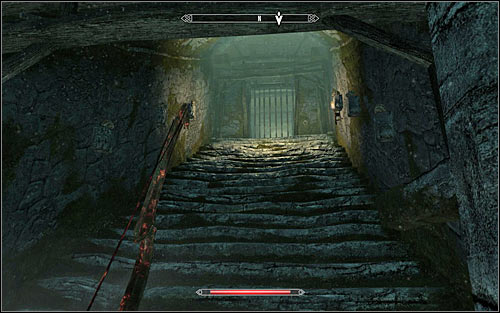 I recommend exploring a corridor leading to the south, because you can find there a masterfully protected chest. If you manage to open it, you can take several extremely valuable items, including dwarven bow of flames. Continue your journey through the tombs. Eventually you should reach a new interactive chain (screen above). Unlock the passage and save the game, because you're approaching the Cicero's hideout. 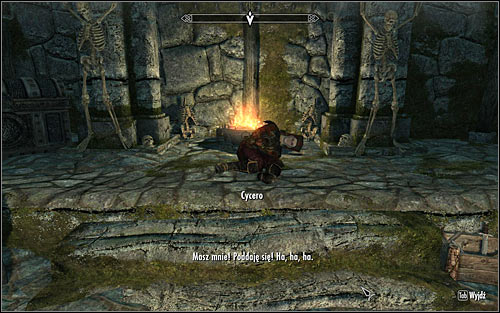 Walk to the end of the corridor and choose the door to the right, ignoring fact that the game has temporarily blocked the usage of weapons and spells. Approach seriously wounded Cicero to activate a conversation (screen above). The jester will ask you not to kill him and to lie Astrid about his death. A final decision about his fate is up to you. 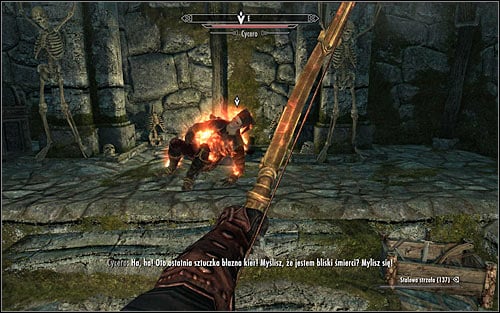 If you're going to kill Cicero, then you have to provoke him to fight (screen above). As the fight takes place in a relatively small room, you have to watch out, especially if your character prefers attacks from a distance. After winning the battle examine Cicero's corpse, because you'll be able to pick valuable and useful for an assassins elements of jester's armor, as well as an ebony dagger. 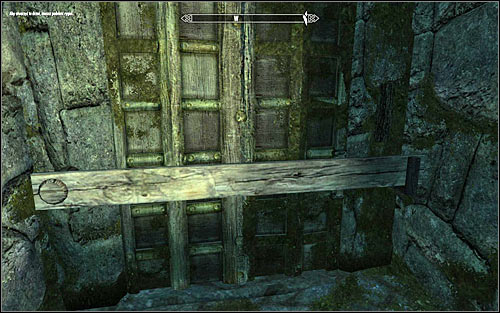 If you're going to keep Cicero alive, then you have to follow his advice and leave him alone and exit the Sanctuary. Turn around and approach the door in front of you (screen above). Interact with the door bar. After unlocking the door you'll return to one of the rooms explored previously. 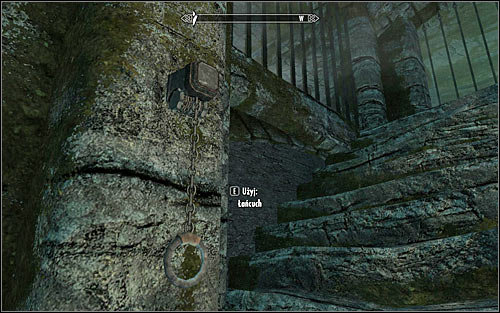 Also here you can use shortcuts and pull the chain (screen above). The bars visible in a distance will lower down. Regardless of your decision about Cicero's fate, you have to get to the exit from assassins' hideout. 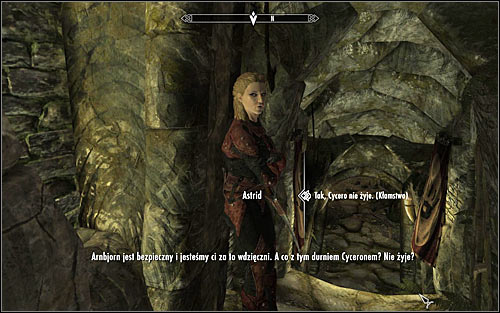 Open the world map and confirm your decision to travel to the Dark Brotherhood's Sanctuary. Once you get there, talk to Astrid. If you've killed Cicero, then you'll tell her the truth. Otherwise you have to lie (screen above) an in this case fortunately you do not have to use the Speech skill. Astrid will let you to take care of her horse permanently and send you to Festus Krex to talk about details of further contract.