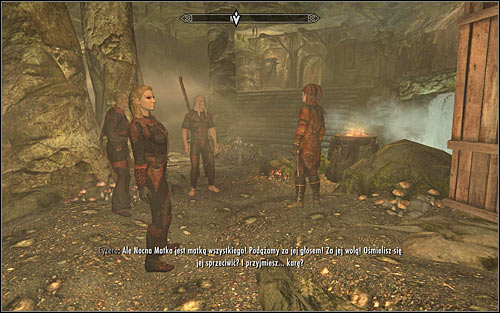 A chance to activate this quest will appear after completing the quest Sanctuary, but additionally it is required to execute at least one of three side contracts received from Nazir. Return to the Dark Brotherhood's Sanctuary and head to the main cave. You'll notice that Cicero has appeared - the man dressed as a jester you met before next to the damaged wagon (screen above). Cicero came here with his death mother, which is, as it turns out, the Night Mother mentioned earlier by Astrid. 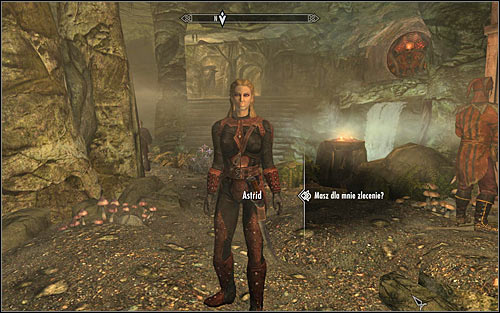 Listen to quite long conversation. After it ends, Astrid should come to you. The assassin will ask you to execute more important and also more difficult contract, sending you to Markarth to meet with woman named Muiri (screen above). 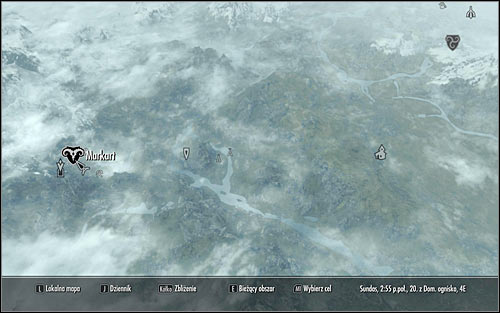 Leave the Dark Brotherhood's Sanctuary, open the map of the world and choose Markarth as your target (screen above). It is located next to the western end of Skyrim. It doesn't matter what time of day you'll get there because Muiri should be available all the time. 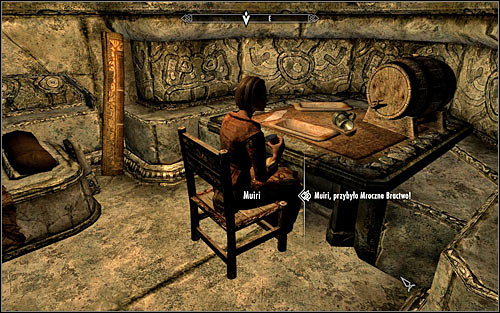 You can find Muiri in one of few places in Markarth. She is an apothecary helper, so it is most likely to meet her at the Hag's Cure shop. You might also look for her walking around the town or in the Silver-Blood Inn (it is best to follow game's suggestions). After finding her you can just accept the contract or figure out why the woman wants Alain Dufont dead. Muiri will also have an optional contract for you, connected to assassination of Nilsine Shatter-Shield, and since it is bonus contract, we will deal with it later. At the end of the meeting Muiri will give you two Lotus Extracts, which can be used to poison your weapons and easier kill both persons indicated by her. 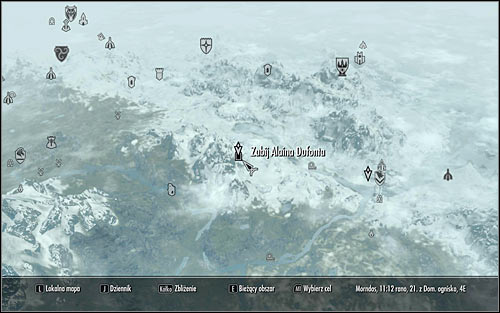 I suggest assassinating Alain Dufont first, because the main contract is made on him. Leave Markarth and open the map of the world. Your current target is dwarven ruins named Raldbthar (screen above). I assume that you haven't discovered this location yet, so you should plan your travel carefully. I suggest starting at Windhelm and then following roughly a straight line to the west. 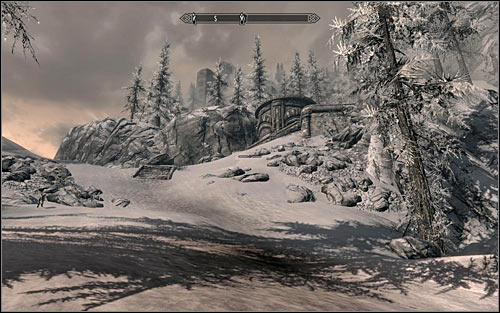 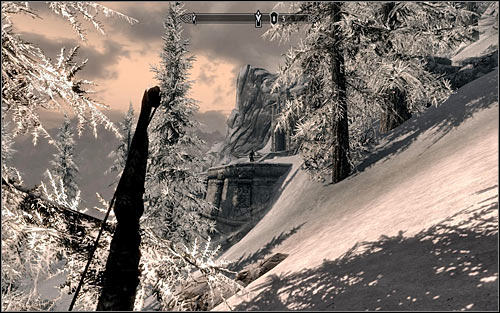 Unfortunately you have to reckon with the fact that there are few bandits outside to be defeated. If you're going to sneak in, it is best to get them from flank and attack from a distance (screen above). If you do not mind the direct combat, you can attack them frontally, but in this case you should quickly deal with archers. 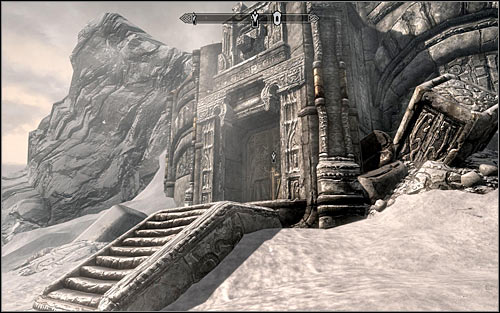 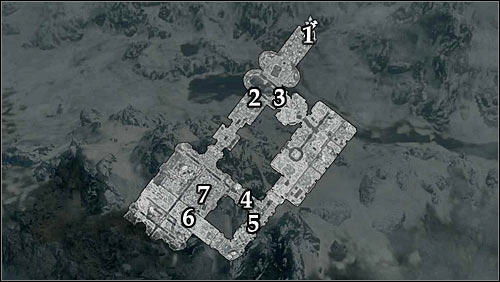 After fights, locate the huge entrance gate to the Raldbthar ruins (screen above). Once you get inside, you'll be able to choose whether you want to keep sneaking or fighting. You'll find a new opponent right in the first chamber of the ruins and if you use spells or ranged weapons, you'll be able to kill him before he wakes up and stands up. 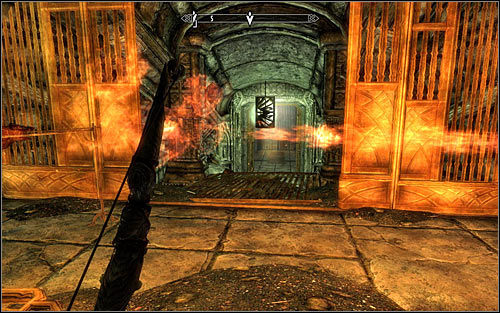 There are two paths leading to the large chamber, where Alain is located. An easiest way is to choose a corridor leading south-west (screen above), but you would have to watch out for the flames. In order to bypass them you might use the run option or Dragon Shout - Whirlwind Sprint. After few moments you would get to the closed gate, which can be open with one or more lockpicks. 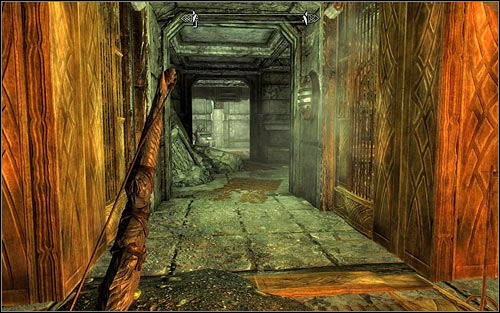 A longer way to your target implies choosing a corridor leading to the south-east (screen above). Unfortunately, this area is guarded by three bandits in total. At least two of them can be attacked by surprise though. Watch out for a bandit thug, who is far tougher than his colleagues. 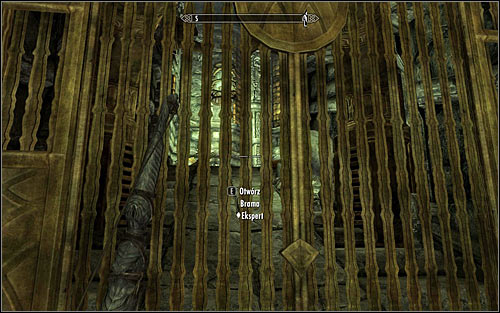 Assuming that you've chosen a longer way to get to Alain, at its end you can choose whether to use a corridor leading to the north-west or open the southwestern gate (screen above). A much better solution is to open the gate, but unfortunately it has an excellent quality lock. 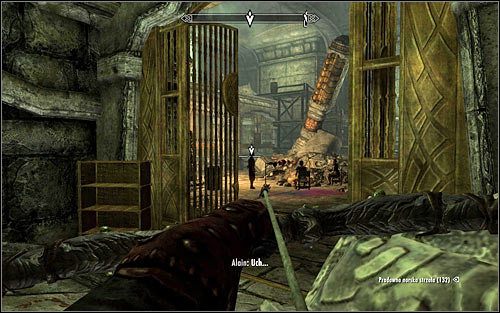 Regardless of the path you've chosen, it is worth to open the inventory and use Lotus Extract (category: Potions) before entering Alain's hideout. Thanks to that your actual weapon will be enhanced with the possibility of poisoning the attacked target. If you've chosen one of the standard paths, it is best to attack Alain from the distance (screen above) and then deal with his colleagues (or quickly escape the ruins). 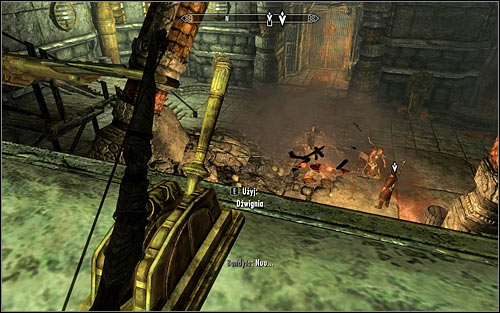 If you've chosen a longer way to reach your target and you've managed to open the gate mentioned before, you'll be able to get to the upper walkway. In this case it is good to interact with the lever next to the middle ballista (screen above), so you can kill two bandits visible at the bottom. After that, quickly kill Alain, whether in direct combat or using a poisoned arrow.