If you have already found one of the Unusual Gems, in your journal you will find a mission of finding a person who knows something about such items. A specialist in these cases can be found at The Ragged Flagon in Riften - a grey-haired woman named Vex. She will tell you the history of the Gem (known as the Stones of Barenziah) and give you a mission of gathering the others. There's a total of 24, so collecting all of them isn't easy. 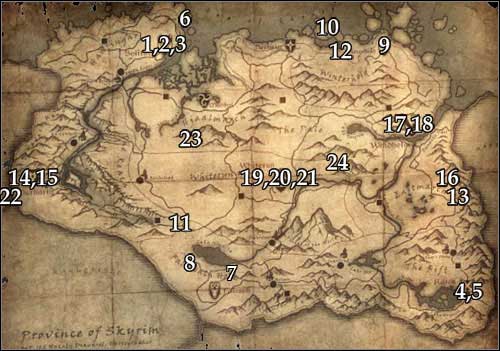 All gems have been marked on the map above. Their exact locations are as follows:

1 - Solitude, Proudspire Manor (in order to get inside, you have to buy the manor for 25000 gold and get the Jarl's agreement)

2 - Solitude, Blue Palace (on a shelf in the Jarl's quarters)

3 - Elenwen's Solar in the Thalmor Embassy, north of Solitude (you can get there only thanks to the Diplomatic Immunity main mission)

5 - Riften, Black-Briar Lodge (above the bedroom)

6 - Dainty Sload (in the captain's quarters)

7 - Pinewatch (in the catacombs, behind a secret passage inside one of the Draugr coffins)

8 - Dark Brotherhood Sanctuary (inside a dresser in Astrid's room)

9 - Winterhold (on a shelf in the Arch-Mage quarters)

10 - Yngvild (in the room behind the throne)

11 - Sunderstone Gorge (opposite to the Word Wall)

15 - Markarth, Understone Keep (inside the Dwemer Museum, below a locked display case)

16 - Stony Creek Cave (in the area inhabited by the wizard)

17 - Windhelm, House of Clan Shatter-Shield (above the bedroom on the left)

18 - Windhelm, Unliving's Quarters (in the catacombs, inside one of the crypts)

19 - Whiterun, Hall of the Dead (in the catacombs, beside the skeleton)

20 - Whiterun, Dragonsreach (in the Jarl's bedroom)

22 - Dead Crone Rock (opposite to the Word Wall)

23 - Rannveig's Fast (on a table beside the water prison)

After collecting all of the Stones of Barenziah, take them to Vex. The grey-haired woman will be surprise that you were able to collect them - after all, they were separated for quite some time. Unfortunately, in order to connect all the Stones and therefore complete the quest, you will still need the Crown of Barenziah. It can be found at Tolvald's Cave, in the eastern part of Skyrim (screen below). 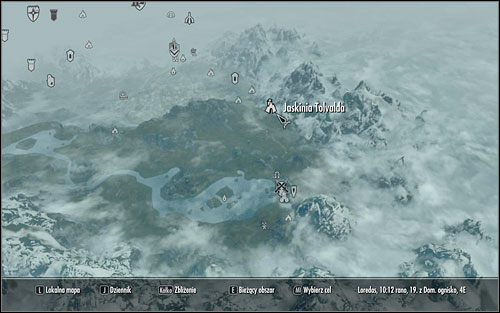 After bringing Vex the crown, the Stones will be placed in it and the complete artifact put onto the dummy at The Ragged Flagon. In return for your trouble, you will be granted with an unusual blessing - each time you open a container of any kind, there's a high chance you will find some precious stones inside. Apparently Berenziah cared about his servant deeply.