The place you need to head to is at the south-west edge of Skyrim. In order to get there, start off at Falkret and go west, heading towards the mountains. If you have found the Dark Brotherhood Sanctuary already, it would be even better as a starting point. 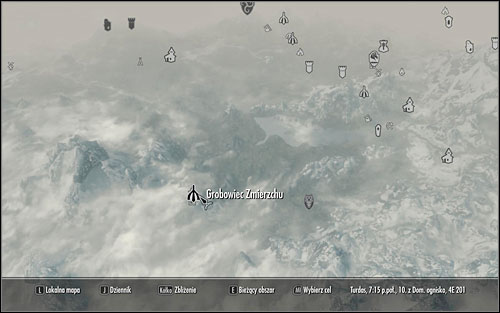 After reaching the western mountains, search for a cave entrance. You should find it without any problems - it's surrounded by a waterfall from one side and from the other by burning vessels and menhirs (screen below). 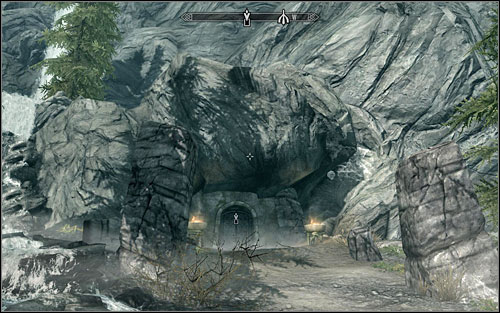 Enter the cave and you will see one of the former Nightingales in front of you. Soon it will turn out that it's not an ordinary ghost, but Gallus - the one who Mercer Frey murdered. The man will be very happy to hear that Karliah is still alive and you are in possession of the Skeleton Key. Unfortunately, you can't give the artifact to the ghost - as the Guild traitor desecrated the temple, the door in its depths have shut, therefore weakening the ghost inhabiting the dungeon and causing them to lose their senses. Apart from Gallus, every ghost you come across will be very aggressive. 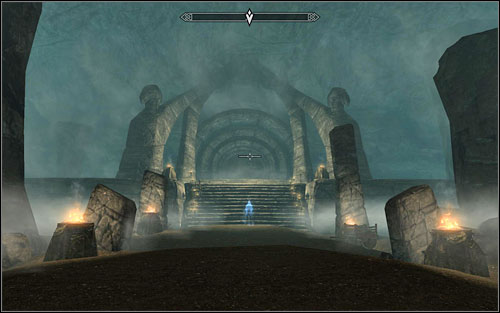 If you ask the late Guild leader for any hints, he will tell you that nearby you should find the corpse of one of your predecessors, who wanted to speak to Nocturnal. That way you will activate the optional objective Retrieve Nystrom's Journal.

Turn left of Gallus and go towards the cave wall. Eventually you should see a skeleton - search it to find the Nystrom's Journal between the bones. As it seems from its content, the clever thief pretended to be a Nocturnal acolyte, meanwhile the only thing he cared about were the riches hidden in her treasury. In order to reach it, he had to go through five trials, the hints to which he has noted in the journal. Unfortunately they aren't very useful, being puzzles themselves. 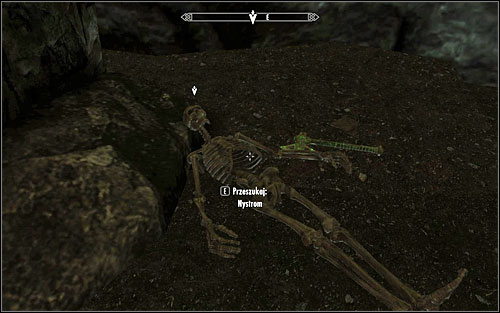 Beside Nystrom you will also find his money-bag and a quite powerful Dwarven Battle Axe. Take whatever you need - the dead don't need equipment anymore. As you take the items, the skeleton will break up into pieces - probably in a helpless act of protest.

Go past Gallus and take the stairs up the corridor. As you cross the iron gate, be ready for a fight - two Nightingale Sentinels await you. The enemies are quite strong, so you would do better by killing them with sneak attacks - fighting them directly would cost you too many potions. After dealing with the enemies, look inside the room upstairs to find a Soul Gem. 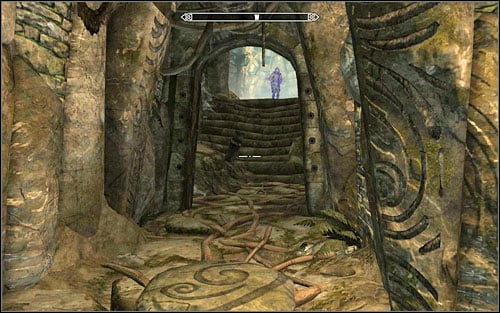 Move onwards and look out for a trap - there's a pressure plate on the ground which activates poison arrows. Avoid it and sneak up onto the next enemy - he's standing alone, almost as if he's waiting for you (screen above). 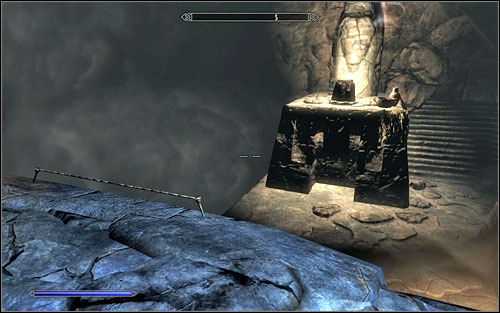 After defeating the guardian and going through the next gate, you will reach a very peculiar, dark doom. Don't approach the light sources - it's deadly. The only way to stay alive is staying in the shadows at all times. You need to follow the narrow streams of darkness, manoeuvring between the light. You also need to look out for traps - they can be easily missed in the darkness (screen above). Luckily only the stationary light is deadly - nothing stands in the way of using a torch to safely avoid the dangers. 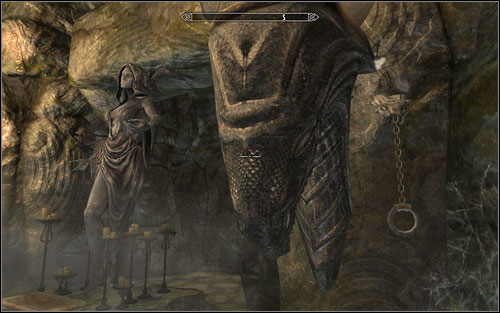 Going out of the dark room, you will stand opposite to a Nocturnal statue. Beside her feet you will find some riches and a bandit corpse. If you take a closer look, you should note two chains on both sides of the statue (screen above). pull them to activate a secret mechanism which will open the gate behind the goddess. 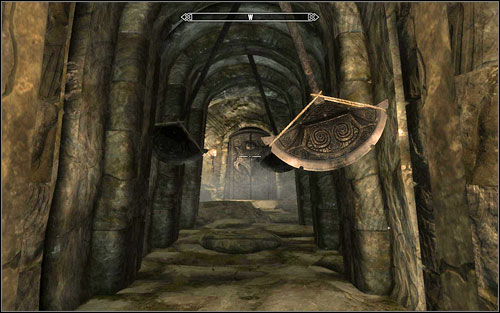 Having crossed the secret passage, be ready for another surprise - swinging axes and a series of floor traps await you. You might try to go through this part of the corridor (the Whirlwind Sprint Shout can come in handy here), though it's not necessary: if you turn left, you should some across a door leading into a corridor which will let you avoid the dangerous part. Inside the large room that you will come across while you're at it, you will meet Nightingale Sentinels and some treasures (including the Proper Lock Design skillbook, boosting your Lockpicking). After dealing with the enemies, head to the Twilight Sepulcher Inner Sanctum. 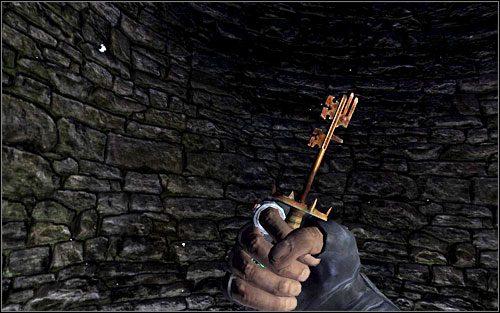 Head across the lit room and jump inside the well. After landing, you should note that the skeleton of Anders - Nystrom's accomplice, whose body you found by the entrance - is lying beside. Based on the notes that you can find beside him, it would seem that the poor man fell here and couldn't find an exit. It would seem that you're in for the same faith, though luckily the Skeleton Key will come in handy, as it will start vibrating and destroy the floor. Therefore you should reach a room in which you have to return the ancient artifact.

New main objective: Return the Skeleton Key to the Ebonmere

Being in the middle of the room into which you fell, put the Skeleton Key into the hole in the centre. As you do it, Nocturnal herself will appear before you. In a short conversation she will thank you for returning the artifact, though she won't hide the fact that she expected it, as you were in fact only a puppet playing a role in a higher plan. 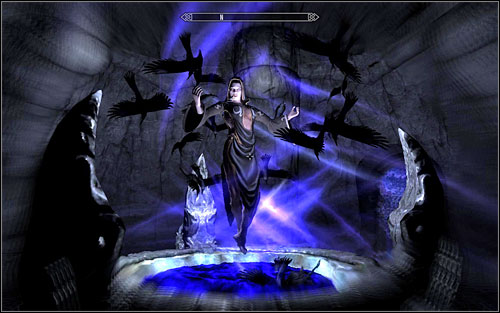 Afterwards you should speak to Karliah, who will surprisingly appear in the room.

The elf will congratulate you on completing the mission and thank you for your help. From now you will become an Agent of Nocturnal - chosen by the goddess herself. Before leaving The Twilight Sepulcher, you can absorb one of three power which the goddess will grant you with. Choose wisely, as you can change your mind only after 24 hours have passed. 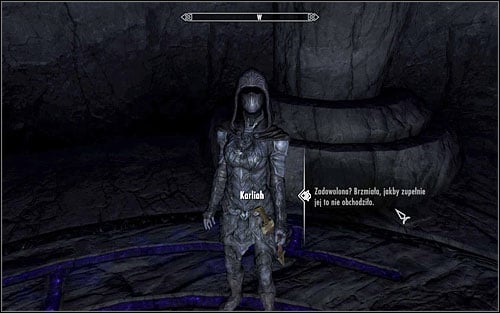 You can choose one of three Nightingale powers: Shadowcloak of Nocturnal, Nightingale Subterfuge or Nightingale Strife. In order to absorb a certain power, you need to stand on the corresponding pedestal: crescent moon, half moon and full moon.

Shadowcloak of Nocturnal (crescent): once a day you can cause a chosen enemy to go berserk.

Nightingale Subterfuge (half moon): once a day you can become invisible while sneaking. IF you attack or interact with the environment in any other way, the spell's effect will fade away. Crouch to reactivate it.

Nightingale Strife (full moon): once a day you can suck out 100 health points out of an enemy. 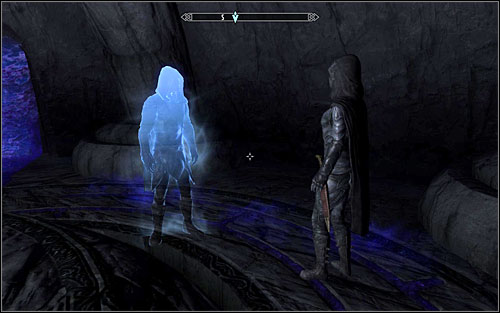 Before leaving the Twilight Sepulcher Inner Sanctum, you will be able to encounter Gallus and Karliah reuniting. The lovers will bid themselves farewell for the last time, therefore ending a certain chapter in the history of the Thieves Guild. The elf will remain here, guarding the Skeleton Key and ready to help, should you want to come here again. You can change the Nocturnal's blessing once every 24 hours - it's a good reason to visit the Sanctum from time to time. If you have already completed all the City Influence quests, you can return to The Ragged Flagon and become the Leader of the Guild.

At this point, the main storyline of the Thieves Guild comes to an end. You still however have some chests and infinite locks to open - who knows, maybe the biggest wave of robberies in the history of Skyrim is soon to come?