Get out of Winterhold and head to Riften. As you have probably notice, the cemetery entrance to The Ragged Flagon has been closed, so you will have to use the one leading through The Ratway (the same one you used to get here the first time). 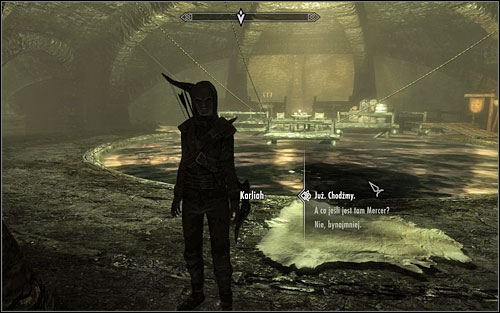 After reaching the destination, speak to Karliah - you need to agree on a plan. Luckily you have the decoded Gallus's Journal which is key evidence against Mercer Frey. Now you will need to tell Brynjolf of your suspicions.

The Thieves Guild members have Karliah for a traitor, so you won't be welcomed too warmly: if not for Brynjolf's cold blood, Vex would probably kill the refugee right away. Luckily the red-haired man runs the organization during Mercer's absence, thanks to which you will be able to give him Gallus's Encoded Journal. 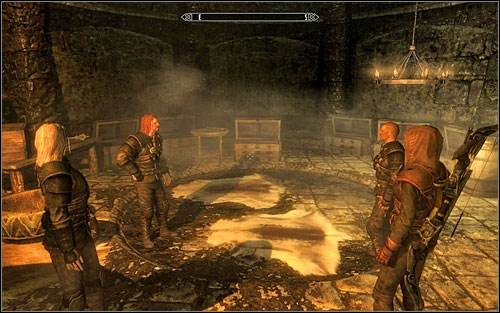 The thieves at first won't believe in what has been written in the journal - they need proof. Brynjolf will decide to check the vault - if Gallus was right and Mercer has been stealing from the Guild for years. As he opens the gate, it turns out there's literally nothing inside. At this point it will be obvious that Karliah is the one telling the truth. You should speak to Brynjolf as to how deal with this treachery.

After discovering the theft, Brynjolf will have a few question for you - it's the best moment to tell him the whole story. As you tell him everything, the thief will tell you to get into Mercer Frey's residence - the Riftweald Manor - found in Riften. At the same time you will be warned of the guard - he's supposed to be a quite strong enemy. The Guild is desperate enough that it will let you do anything - including killing anyone who will cross your path. 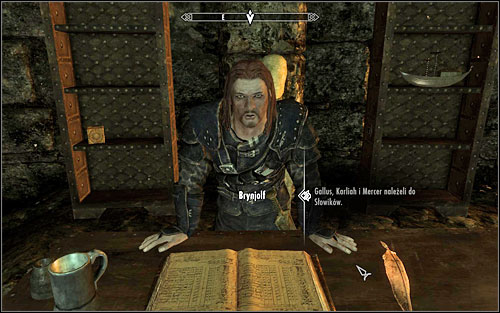 During the conversation with Brynjolf, ask him how to reach the Riftweald Manor - that way you will learn of the mysterious mechanism which you can use to get inside relatively safely. If you try to ask him about the guard, he will tell you to speak with Vex - supposedly they used to know each other.

The grey-haired woman can be as always found at The Ragged Flagon, nearby the bartender. Ask her about Vald to learn that he's a ruthless thug, valuing only money. Bribing him isn't an option - Mercer would probably kill him before he could use the money. 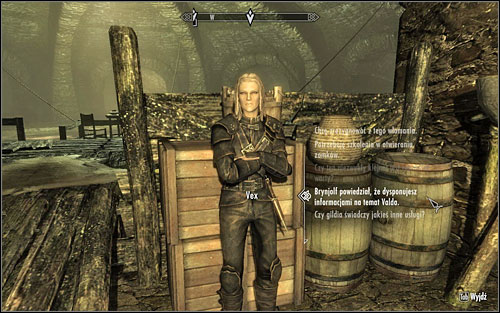 The case with Vald can be solved otherwise - he has a large debt at Maven Black-Briar. Cancelling it might make him more willing to cooperate.

New optional objective: Shoot the mechanism to lower the ramp

There are a couple ways of reaching Riftweald Manor. The hardest, but not requiring any violence option, implies cancel Vald's debt - that way you will get rid of the largest problem.

New main objective: Bring the Quill of Gemination to Maven

Maven Black-Briar can be met at the marketplace, Black-Briar Meadery or The Bee and Barb tavern. Regardless of where she's at, the conversation will take a rather unexpected turn - it seems like Vald ran into debt because of losing Maven's pen. It however wasn't a simple writing tool, but the Quill of Gemination - a magical artifact of exceptional powers. 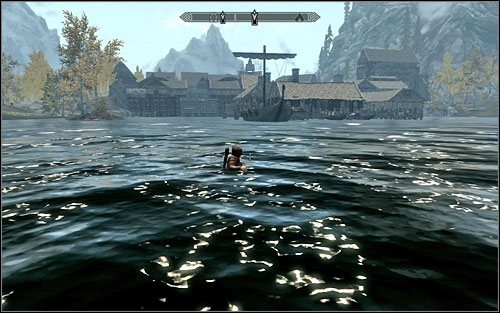 If you bring Maven the artifact that Valdo lost, his debt will be paid and the man won't have to guard Mercer Frey's manor anymore. The boat in which the Quill was san in a lake beside Riften. The boat-wreck and the Quill of Gemination can be found midway between the Riften harbour and Goldenglow Farm - exactly as seen in the above screenshot. Dive underwater to retrieve the precious item and take it to its lawful owner. In return you will receive a document confirming Vald's debt being paid. 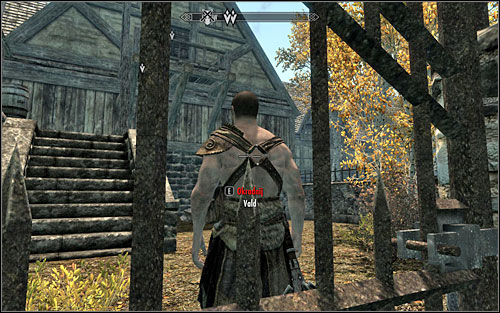 If you don't want to help the guard, you try to trick him. A quite interesting option is stealing his keys as he's walking beside the gate (screen above) and afterwards slipping inside. The problems is that the courtyard is rather small and doesn't create much place to hide, while Valdo will attack immediately upon noticing you. Of course nothing stand in the way of killing the dull thug, though you would have to reckon with getting a fine for the murder. 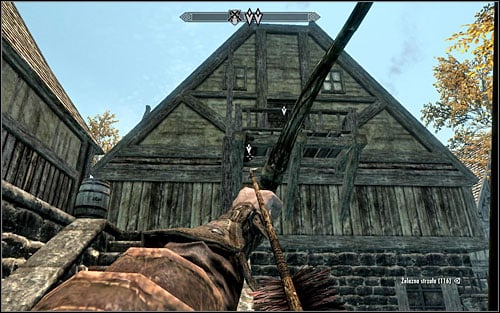 What's interesting, you don't need to worry about Vald at all - you just have to shoot an arrow at the mechanism on the upper floor or the residence to create a quite comfortable passage inside (screen above). What's important is that the residence cannot be accessed in any other way - all the doors are locked from inside. If you didn't get the key from Vald, you can use picklocks - the only problem is therefore avoiding the guard.

After getting inside the Riftweald Manor, you need to focus and move very quietly - many dangers await you here. Inside the first room on the right there are two well-equipped bandits and fighting them is rather impossible to avoid. After defeating them, go down to the ground floor and search for a suspicious wardrobe (screen below) - inside of it you will find a passage to the underground. 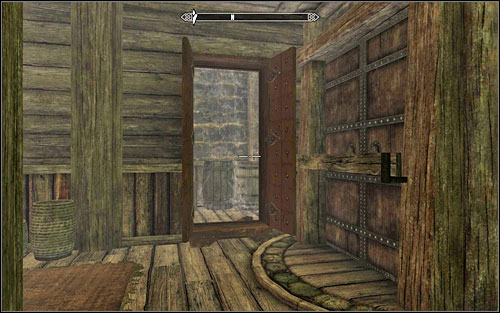 After crossing the secret door, be ready for a whole series of traps. Keep looking on the floor at all times - there are a couple pressure plates which activate complicated and deadly mechanisms. At some point you will reach a room with untypical, green floor tiles (screen below). If you step on the bad tile, you will be burned. Luckily the path you need to follow is very easy - looking from above, it will resemble an inverted S. 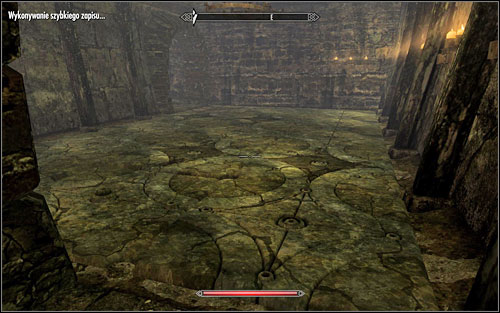 After crossing this room, it's time for the swinging blades and ram (screen below) - it will be hard to dodge them in the narrow corridor, so you should make use of the Whirlwind Sprint to reach the other side. 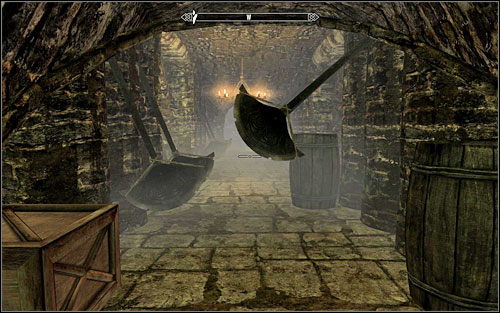 Continuing onwards, you will reach a door protected by yet another trap (poisoned arrows). Open the entrance from a safe distance. Inside, steal Mercer's Plans which can be found on his desk. Use the chance to take a look around the room - on the table you will find a book which will increase your Sneak and inside the showcase a powerful sword - the Chillrend. There are also lots of Gems and the Bust of the Gray Fox which should interest Delvin Mallory.

After ransacking Mercer's residence, head out of the underground and go through the door on the right (you will therefore avoid having to deal with the trap all over again). Afterwards, by going through the Ratway Sewer, reach Brynjolf at The Ragged Flagon. 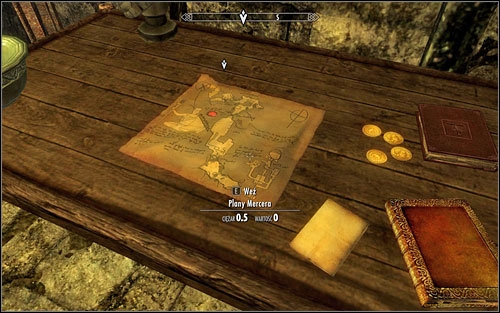 As it turns out, Mercer Frey has left the city - the Guild spies are unable to locate him. The documents that you have obtained suggest that the traitor wants to obtain the Eyes of the Falmer - an ancient artifact that even Gallus dreamed of obtaining. Without a doubt, you need to stop him before he reaches the powerful relic.