The Thieves Guild Leader is very concerned with the recent events - without a doubt, someone is trying to destroy his organization. Luckily the enemy has made a mistake thanks to which you will be able to get on his trail. As you will learn from Mercer, one of your mysterious enemy's servants is Gulum-Ei - the Guild's old contact, currently inhabiting Solitude. You should head there and squeeze out all the information you can from him. 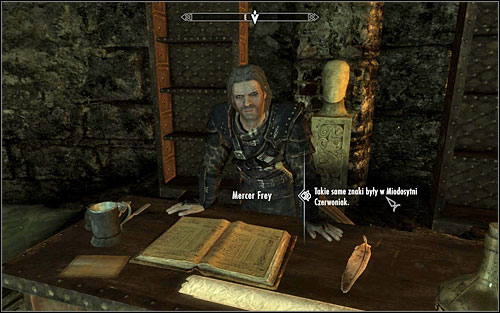 Before heading out, you can speak to Brynjolf who will give you some advice.

Brynjolf should as always be hanging around The Ragged Flagon - you won't have any problems with finding him. During the conversation you will learn that Gulum-Ei is very important for the Guild, therefore killing him isn't an option. Bribing the insidious bastard or spying if the first option fails would be a better idea. The Argonian is known for wide connection with the East Empire Company which might be directly related with the whole conspiracy. 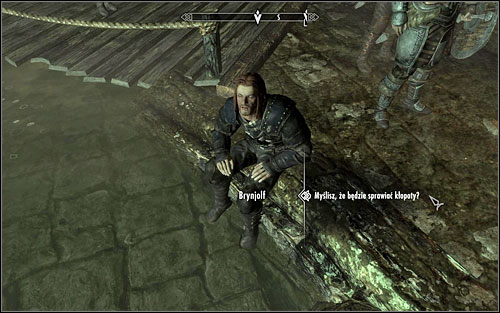 After speaking with Brynjolf, head to Solitude where you will find Gulum-Ei.

In order to reach the deceitful Argonian, you will need to head to Solitude. The city is in the north-west edge of Skyrim, on a large rock. If you haven't been there yet, you should head to Dawnstar and afterwards go west, or alternatively backtrack to Whiterun or Morthal to head out from there. 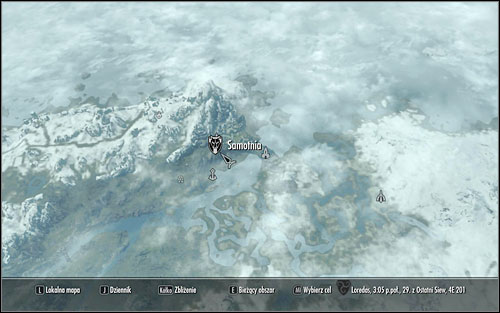 Gulum-Ei can be found at The Winking Skeever tavern, just left of the city gate. The lizard will dodge giving you any clear answers. You can either use Persuasion (he's very resistant though - you probably won't succeed), Intimidation (also pretty pointless) or Briber. The latter option will interest the Argonian enough for him to give you some answers, if only you bring him a case of Firebrand Wine. 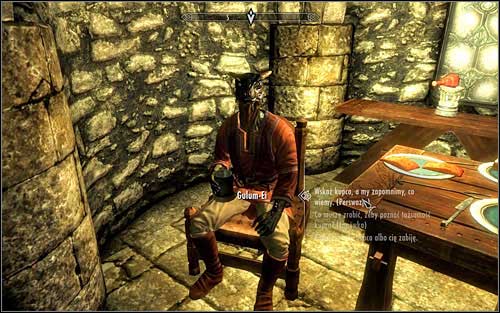 If you did manage to convince Gulum-Ei with Persuasion, skip to Shadow Gulum-Ei. Otherwise keep reading the guide normally.

In order to satisfy the Argonian's thirst, head to the Blue Palace in the south-east part of Solitude. After heading inside, go a bit left where you will find a case of Firebrand Wine just lying on the table. As there's no one guarding it, stealing it shouldn't be a problem (screen below). 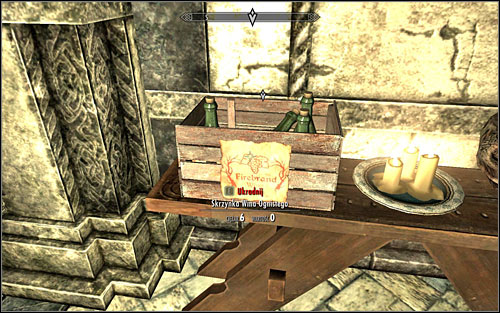 Having obtained the beverage, return to Gulum-Ei.

Return to The Winking Skeever tavern, where you previously left the Argonian. Give him the case of Firebrand Wine to receive three Soul Gems (two lesser and one petty) and some information on the person trying to destroy the Guild in return. 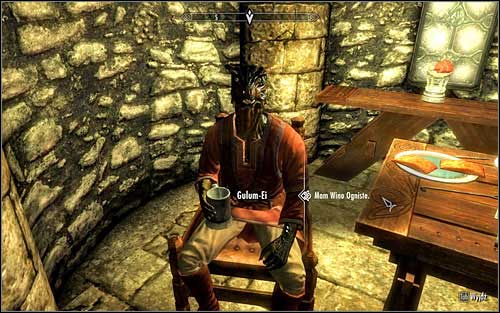 Unfortunately Gulum-Ei will be very brief and you won't learn too much from him. You should therefore shadow him - he should fall into trouble sooner or later.

After getting out of The Winking Skeever tavern, Gulum-Ei will head towards the East Empire Company Warehouse, found below the rock on which Solitude was built. The area was marked on the map with an anchor. Getting there is quite easy - you just need to head out of town and go towards the harbour below. If you take a look around, you should note a small door beside the sea gate (screen below). What's interesting, you don't need to strictly follow the Argonian - Gulum-Ei will immediately appear after you enter. You also don't have to be very discreet - even if the lizard notices you, he won't make too much out of it (though he can call in some rather weak guards). 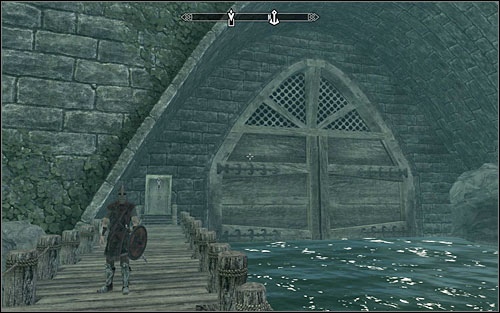 Keep following your target after entering the warehouse. The Thieves Guild doesn't limit you in any way regarding the East Empire Company servants - you can kill them all if you only want to. It's also a quite reasonable option, as they have good gear and multiple potions. What's interesting, Gulum-Ei won't pay attention to what's going on around him at all - until you don't attack him, you have a free hand. If plundering the guards doesn't satisfy you, you can always look around for stashed goods - you can find some pretty good items, especially potions. Also check the director's room to find the East Empire Shipping Map - Delvin Mallory will be very interested in it. 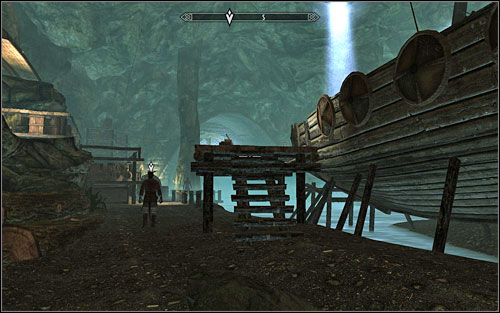 Eventually the Argonian will head inside the Brinewater Grotto - in order to get there, you will need to go past the equipment shelves and wet your boots a bit (follow the lizard's footsteps).

Once inside the cave, look out for traps set throughout it. Afterwards get ready to fight with two Horkers found at the end of the corridor. After defeating them (you rather won't be able to avoid them), look around the nearby shelves - you will find many useful potions there. After collecting all of them, you will have to wonder how you want to move onwards - you can continue going along the wooden platform, therefore coming across two more Bandits (including one mage) or turn right and make your way through the webs (you however won't be able to avoid a fight with Frostbite Spiders). Regardless of the chosen path, you will eventually reach an identical part of the cave. 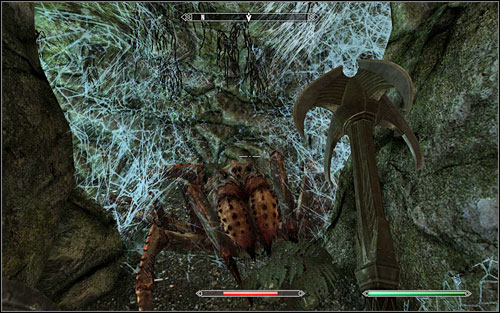 Keep following the only possible path. You need to keep looking out for traps, found pretty much everywhere. You will also have some minor fight with Bandits, though they shouldn't cause you much trouble (remember that you deal additional damage when attacking by surprise). Eventually you will reach the cave in which Gulum-Ei is hiding. Kill his guards and it will make a big enough impression on the lizard that he will decide to give you any information you need. 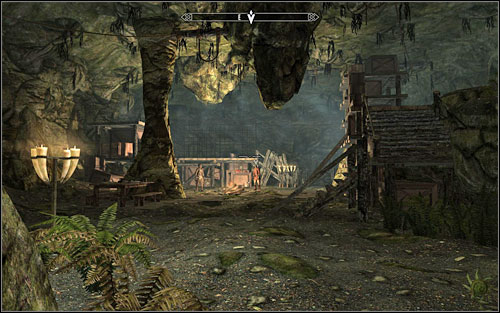 The terrified Argonian will tell you that a certain woman under the name of Karliah is behind the whole conspiracy against the Guild. To confirm his words, he will give you the Goldenglow Bill of Sale which you should give to Mercer Frey at The Ragged Flagon. It's important that you don't kill Gulum-Ei after he tells you the truth - the Guild wouldn't be happy about losing one of its members. If you let the lizard live, you will be able to find him at The Winking Skeever - he will become your Fence. If you happened to kill him, inside one of the chests in the Brinewater Grotto there's a note from which you will learn all that the Argonian would tell you.

Pull the three levers in the corner of the grotto in which you found Gulum-Ei - that way you will open a secret passage thanks to which you will return to the surface of Skyrim. Afterwards head to Riften and speak with Mercer at The Ragged Flagon. As it turns out, Karliah is well known to the Guild Leader - she's the one who murdered his predecessor. The information that you have gained will help the man in finding the place in which the woman is hiding - it's the Snow Veil Sanctum, where you should both head. 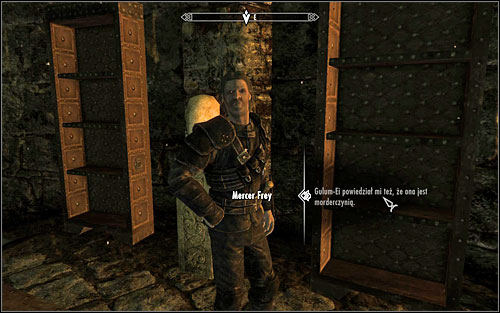 If you haven't killed Gulum-Ei during your investigation, Mercer will tell you to speak to Tonilia who will exchange a part of your armor.

Speak to Tonilia about exchanging a piece of armor 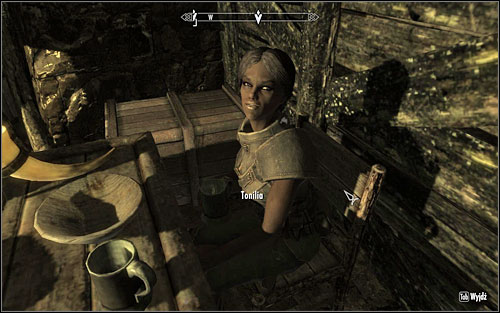 After completing Scoundrel's Folly without killing Gulum-Ei, Mercer Frei will reward you with new equipment. Head to Tonilia at The Ragged Flagon and ask her to upgrade one of your equipment parts. You will be able to choose from four items: