Head out of The Ragged Flagon and go to The Bee and Barb , where Maven Black-Briar is. Go to the upper floor and speak to her - she will ask you to eliminate the Honningbrew Meadery, Maven's competitor, from business. In order to set things into motion, you need to head to Whiterun and there speak to Mallus Maccius. 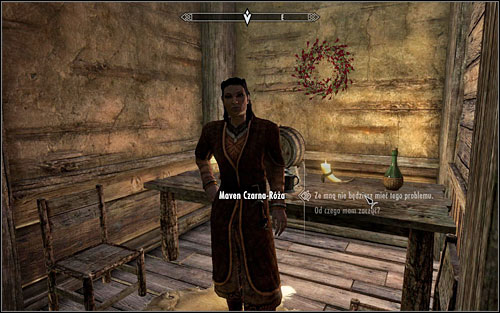 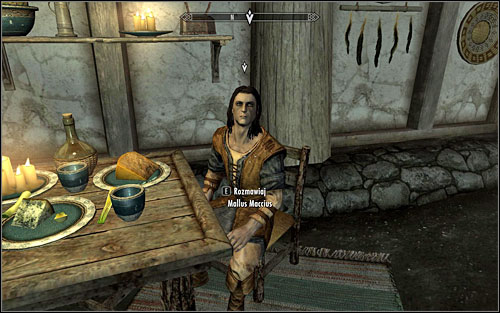 You will find your contact at The Bannered Mare tavern, in the room on the left. Mallus has a quite easy idea how to get the Honningbrew Meadery out of business. The Meadery is currently fighting with a recent pest infestation, with bad influence on its renown. He will cleverly suggest that you hire yourself at the Honningbrew Meadery as a pest exterminator and afterwards poison the vat with the precious liquor. Head to the company's headquarters and speak with the owner, Sabjorn. 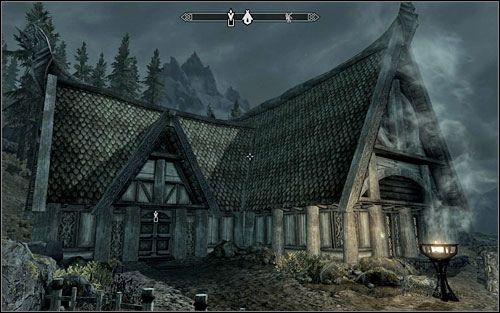 In order to reach the Honningbrew Meadery, head out of Whiterun and go south-east. There you will find two inconspicuous buildings, out if which the bigger one is the company headquarters (see screen above). Upon getting inside you should see two dead Skeevers on the ground and Sabjorn quite confused by your intrusion. Tell him that you can take care of the pests. You can do it in three ways: using Speech, intimidation or just offering to help (the difference is that in the two first cases you will receive your payment - 500 gold - in advance). 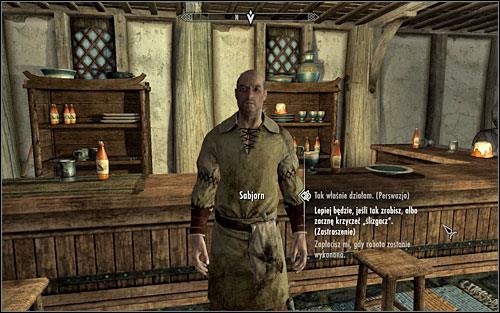 Sabjorn will give you the Pest Poison and ask you to get rid of the infestation by spilling the poison on the pest nest. In order to get there, you will need to head to the basement - use the key received from the Honningbrew Meadery owner. After getting inside, get ready to fight a great number of Skeevers - they inhabit not only the basement, but also the underground twisting tunnel. 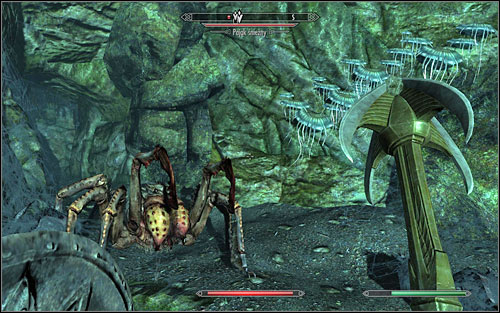 As you head deeper into the corridor, you will eventually come across spider-webs. That's right, not only Skeevers live here. Be ready for a fight before heading into the big cave covered with a greasy substance - there are a few Frostbite Spiders inside. 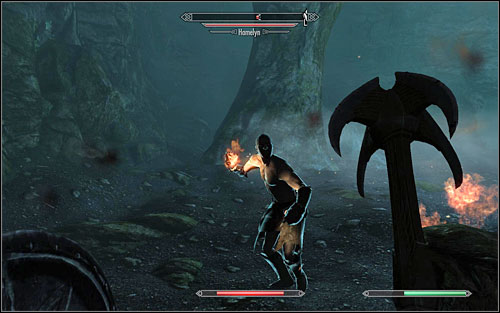 After dealing with the arachnids, head onwards. Look out for traps - there are many of them on the ground and before reaching the further part of the underground complex you will come across a thin line that activates a spiked ball. Before heading into the next cave, equip a bow and try to eliminate a couple Skeevers from a distance - they're weaker than the ones you fought before so you shouldn't have problems with eliminating them. Hamelyn - the mad mage who looks after the pests - might however prove much harder. Drink some potions giving you fire resistance and be ready to heal yourself quickly during the fight. Luckily the enemy doesn't have too much health points, so a couple good hits should calm him down. 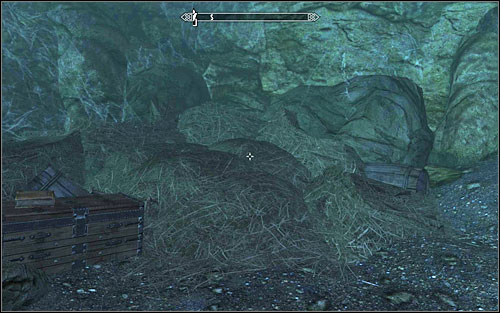 After dealing with the mage, just poison the nest. It can be found in the corner of the room, beside the mage's stuff (screen above). While you're at it, you should note the book on the chest which can boost your Sneak skill.

Get out of the underground using the corridor to the left of the Skeevers nest. As you're reaching the surface, look out for the snares planted right beside the tunnel. Afterwards you will just need to reach the Honningbrew Vat and poison it (screen below). Therefore go up the stairs onto the upper floor and open the lid. Afterwards get back onto the floor, take the exit door key (it's hanging right beside it, on a hook) and return to Sabjorn. 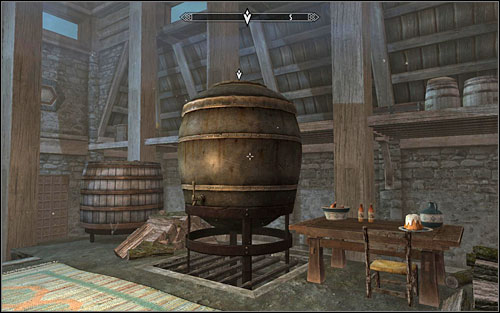 After getting inside Honningbrew Meadery, you should note not only Sabjorn, but also the Guards Captain and Mallus. You have returned just in time to watch the company's fall. Speak with the owner and watch the cinematic. 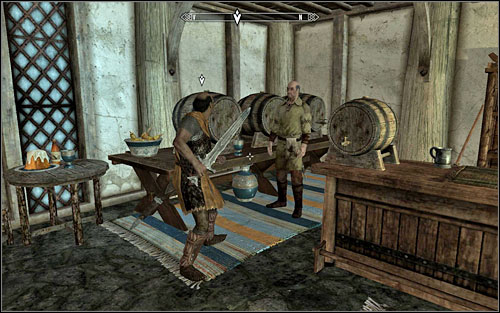 The Captain of course won't like the taste of the poisoned liqueur, recognize it as assassination attempt and take Sabjorn to the Whiterun dungeons. The company will move to Mallus, with whom you should speak.

After getting rid of Sabjorn, his Honningbrew Meadery will practically be taken over by Maven Black-Briar. Speak to Mallus and tell her that your customer wished to know who was financing her competitor. The pale man will suggest that you take a look inside Sabjorn's office on the upper floor. 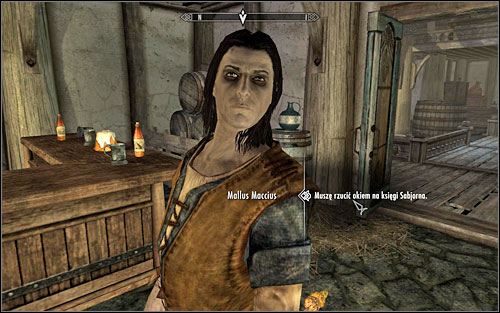 Go onto the upper floor and open the door to the office at the end of the corridor. Inside the dresser in the corner of the room, find the Promissory Note that Maven is looking for (see screen below). The content of the document doesn't give much information, apart from the fact that Sabjorn's partner is highly interested in bringing your employer down. 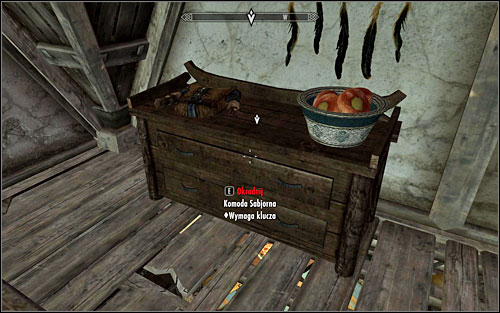 After obtaining the documents, take a look around the room - on one of the tables you will find the A Game At Dinner which can boost your Alchemy. Inside the room next door you can find the Honningbrew Decanter - it will interest Delvin Mallory.

The destination is at the same location as before - inside The Bee and Barb tavern at Riften. Give Maven the obtained documents and she will state that they don't make much sense to her and that the Guild should learn of them as fast as possible. On your way out you will also receive a magical weapon, the quality of which depends on your level. 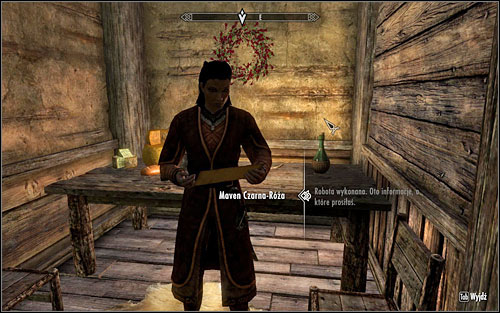 After talking with Maven, you should meet with Brynjolf and tell him of the development. Your superior will be very happy with your progress, though the fact that the symbol found on the Promissory Note is identical as the one from Goldenglow Estate will worry him. 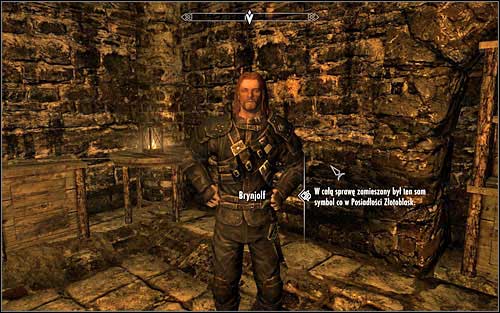 The situation is serious enough for the Guild Leader - Mercer Frey - to take interest in it. You should speak with him as fast as possible.