After completing A Chance Arrangement, Brynjolf will ask you to come to the Thieves Guild, found in the sewers of Riften. 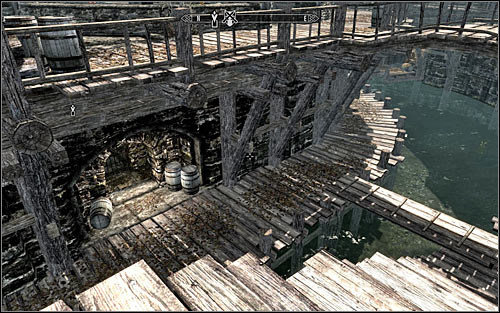 Locating the sewer entrance might prove difficult at first, as it's on the lower level of the city. I'd suggest using the stairs south of the passage marked by the game (screen above). After getting below, you just need to approach the door and therefore reach The Ratway. 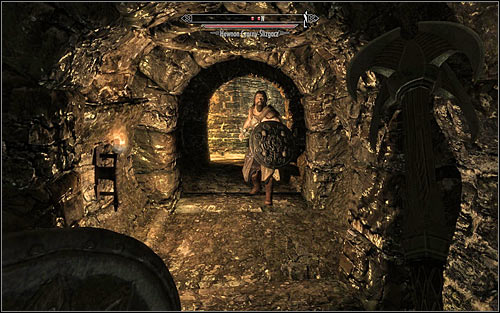 Begin exploring The Ratway. Soon enough you will come across Hewnon Black-Skeever and Draff (screen above). You will have a chance to avoid fighting them, if only you have a high enough Speech skill and use persuasion, but you will more likely be attacked by them immediately. Adjust your tactic depending on who you're fighting with at the moment. As the battle will take place in a narrow corridor, you can also use the Unrelenting Force Shout. Search the bodies of the defeated enemies and return to exploring the sewers. Eventually you need to reach the raised drawbridge. Ignore it and jump onto the lower level. 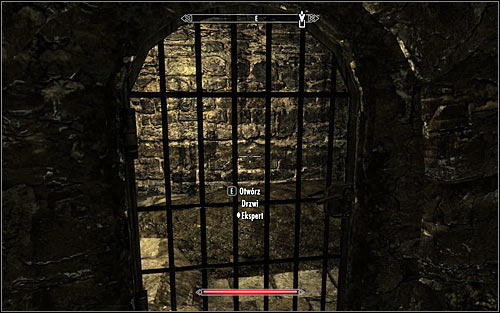 There are two paths leading to the next location. The shorter one implies having to open the secured eastern gate (screen above). If you can't open it or want to explore the area more thoroughly, use the western door. Look out for the first trap connected with that passage, in the form of spikes coming from the side after you open the door. 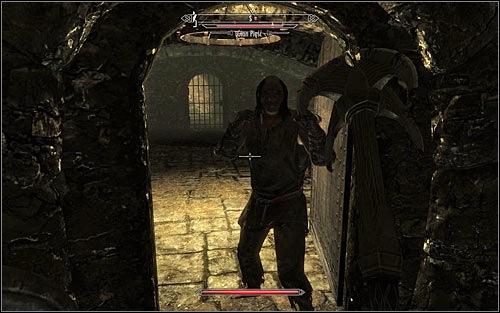 If you have chosen the longer path, you need to take into account that you will have to eliminate Skeever and Gian the Fist (screen above). The second one prefers close combat, so try to attack him from a distance if he causes you problems. Inside the room where Gian was you will also have to look out for bear traps, either avoiding or disarming them. Luckily even if you fall into one, you won't lose too much health. Continue onwards. On your way you will come across one more trap, connected with the pressure plate on the stairs leading onto the upper level. 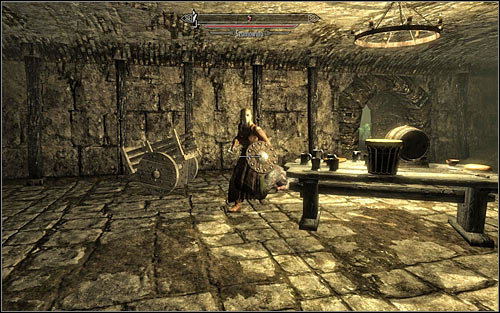 Both paths described above lead to the same room, inside which you will have to get rid of a lowlife (screen above). Afterwards be sure to search the table for the Beggar book, boosting your Pickpocketing. Use the door leading to the underground inn, Ragged Flagon. 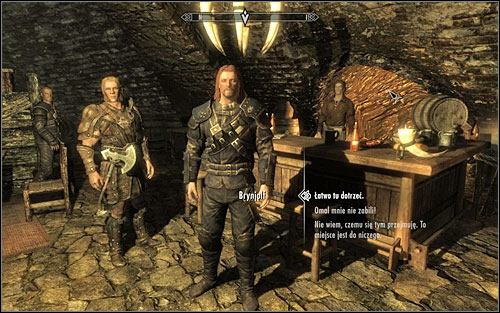 After going round the water container, you will reach Brynjolf and his company. After a short conversation with the red-bearded thief you will receive another mission. It's important to thoroughly ask him about the objectives, as that way you will make completing the mission easier. Take a look around - you can trade with the bartender and Delvin Mallory will teach you sneaking for a small fee.

You will find the debtor at Haelga's Bunkhouse, right beside the Riften entrance. After getting inside, you will see a young, slick woman - that's Helga. Speak to her and she will tell you that she isn't willing to pay her debt to the Thieves Guild (unless you have taken care of the other debtors already, in which case she will pay you immediately). In order to make her pay, you will have to speak with Brynjolf about her weakness (if you haven't already). You will therefore learn that the most precious item at her home is the Statue of Dibella, found behind the wall by the door (screen below). 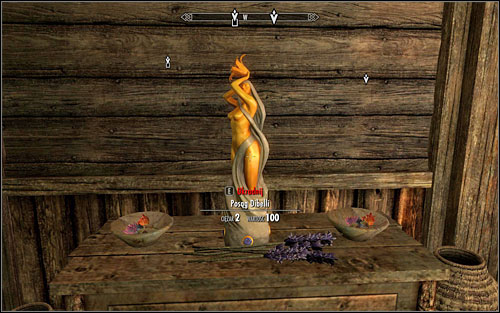 When the owner isn't looking, you should steal the statue. After obtaining it, return to the woman and threat that you will destroy it. After hearing such horrors she will decide to return the debts, therefore satisfying Brynjolf's greed.

Note! There's also an alternative way of completing this quest - when the debtor refuses to pay, you can challenge her for a fight. A fist fight will begin, one you shouldn't have trouble winning. You will receive the payment afterwards. 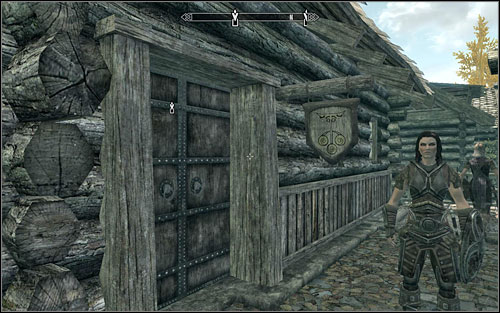 Bersi and his wife can be found at the Pawned Prawn, in the central part of Riften (screen above). You can't hope for a warm welcome and your threats will make no impression on Bersi (unless you have taken care of the other debtors, in which case he will give you the money back immediately). In order to extort the money, you will have to speak to Brynjolf about the merchant's weakness (if you haven't done it already). You will learn that the most precious item in the pawnshop is the Dwarven Urn, standing opposite to the merchant (screen below). 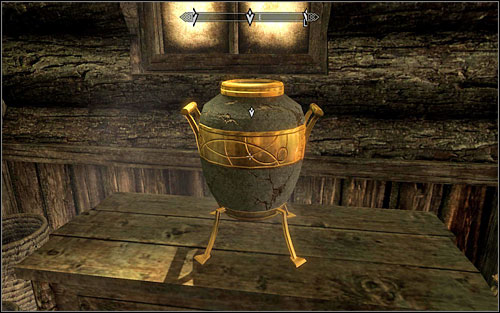 You just need to break the artifact with a strong enough blow (press and hold the mouse button). Afterwards, Bersi should calm down and return the Guild what he owes. 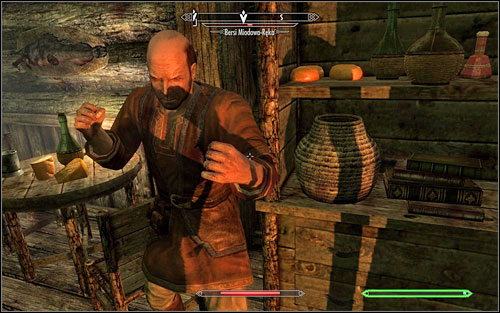 Note! There's also an alternative way of completing this quest - when the debtor refuses to pay, you can challenge him for a fight. A fist fight will begin, one you shouldn't have trouble winning. You will receive the payment afterwards.

Keerava is an inn maid at The Bee and Barb, located right beside the Riften main square. As you might have guessed, she won't be delighted with your visit - the Guild's bad shape is widely known, so the Argonian will refuse to pay you (unless you have taken care of the other debtors, in which case she will pay you immediately). At this points you should decide to blackmail her - her loved one, Talen-Jei, can be found in the inn and will be surprisingly willing to help (screen below). 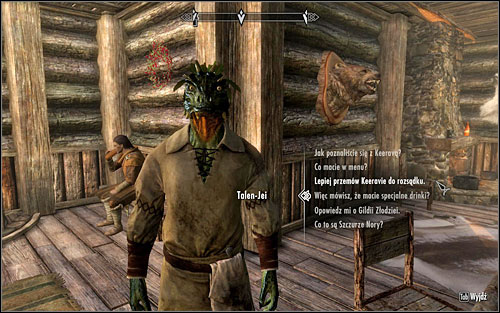 During the conversation with the lizard, suggest him that opposing the Guild isn't a good idea. The reasonable man will be easily persuaded and reveal his sweethearts' weakness - she has a family in Morrowind. Luckily you won't have to go to the distant province, as simply telling Keerava that you know of her relatives will be enough. The inn maid will lose her cool and decide to return her debt.

Note! There's also an alternative way of completing this quest - when the debtor refuses to pay, you can challenge her for a fight. A fist fight will begin, one you shouldn't have trouble winning. You will receive the payment afterwards.

After extorting all three debts, return to The Ragged Flagon. Give the money back to Brynjolf and in return you will receive: Fortify Stealth Skill potion, Healing potion and a Poison potion. 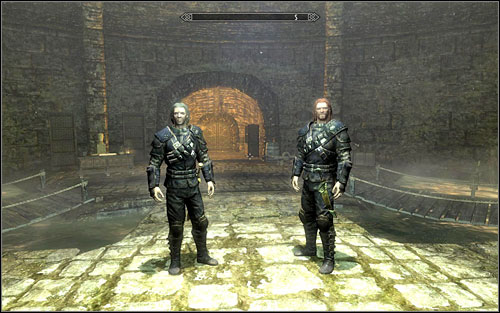 Having completed the task, you gained the thief's trust. He will open the passage to the further part of the underground, the Ragged Flagon Cistern, where the leader of the Guild - Mercer Frey - lives (screen above). 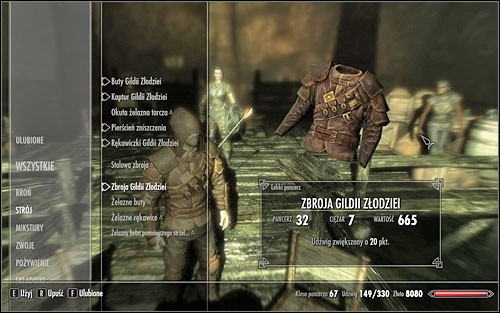 As you become a member of the Guild after completing Taking Care of Business, Brynjolf will let you use the Guild's supplies. Speak to Tonilia (she's at The Ragged Flagon) to receive your equipment. After a short conversation you will receive the armor, boots, hood and gloves. Each of these items has useful magical properties, so they can be useful even further in the game.

If you have found any of the Unusual Gems, Tonilia will suggest that you should head to Vex, who has some knowledge about such items.

Learn more about the Thieves Guild from Delvin

Note! This mission is available only after becoming a member of the Thieves Guild!

The conversation is only but a pretext to a bigger series of quests - the Guild is in a quite bad shape and taking care of that should be one of your main priorities. Therefore you can ask Delvin Mallory for additional missions - ranging at everything from falsifying documents, creating commotion to "fishing" (as Thieves call pickpocketing). You can only do one mission at a time, so think twice before choosing. If you don't want to complete them, there's no problem with it - they're all just optional quests which you don't necessarily have to take on. After completing five such missions in each town, you will unlock bonus quests which will bring you closer to becoming the Guild Leader (see: City Influence). 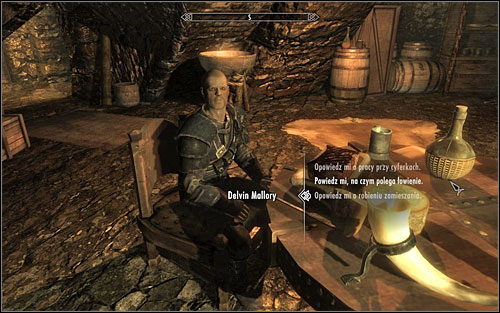 Each mission received from Delvin takes place rather far from Riften - at cities like Markart, Whiterun, Windhelm or Solitude. If you haven't yet been to one of them, you will need to get there now.

Learn more about the Thieves Guild from Vex

The tacit elf can be met at The Ragged Flagon, beside the large water container - she spends most of her time there. After you complete Taking Care of Business and Brynjolf tells you to reach the Goldenglow Estate, you will be finally able to speak to Vex. At first she will treat you rough, but don't worry - that's just the way she is. 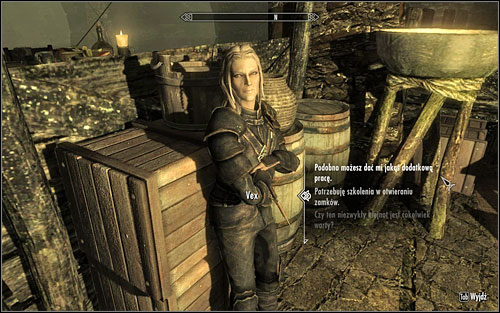 Vex is the last who tried breaking into Goldenglow Estate - unfortunately she wasn't able to complete this task and the mission was passed onto you. Before heading out on the mission you should ask the experienced thief for hints. You will learn that she reached the estate through the sewer hidden at the western part of the island. It's the easiest way of reaching the enemy area, so you should follow it during Loud and Clear. 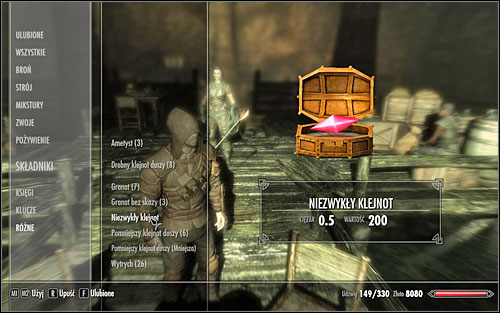 What else has the grey-haired thief to offer? If you find any of the Unusual Gems, she will tell you their story and give you a mission of collecting the others. There's a total of 24, so collecting all of them won't be easy.

Just like Delvin, Vex can give you some side missions. They mainly consist of breaking into houses, thefts, heists and framing innocent people into complicated intrigues. The missions take place in cities such as Markart, Whiterun, Windhelm or Solitude. If you haven't been there yet, you will need to head there now. After completing five such missions in each town, you will unlock bonus quests which will bring you closer to becoming the Guild Leader (see: City Influence). 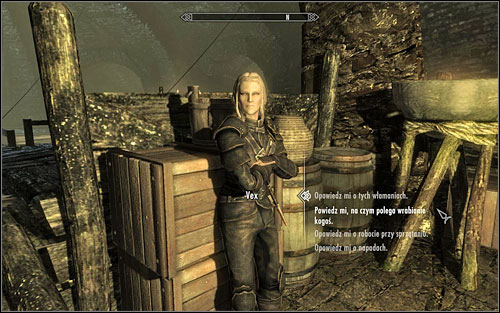