The main occupation of the Thieves Guild is performing bold and often spectacular robberies, mostly without any bloodshed. Simple burglaries and stealing purses isn't however the only thing that this organization does. Many of its members make money on falsifying documents, planting fake evidence or other discreet operations. If this style hits you, you can find the Thieves Guild in Riften - a small town at the south-east edge of the land. There, after entering the sewers, will you reach The Ragged Flagon - an underground tavern in which the best pickpockets of Skyrim can be found (screen below).

As most of the mission received from the Guild doesn't require violence, you can join it at any level you like. If only you can move silently and use the Sneak skill wisely, you will surely handle each challenge. Completing missions will be also good training before the other challenges, like joining The Dark Brotherhood - both these organization value discretion and subtleness. 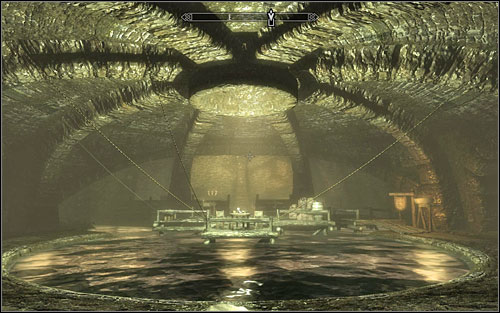 The members of the guild are not only professional thieves, but also merchants and teachers. You can use them to raise skills such as: Sneak, Pickpocket or Lockpicking. What's interesting, after joining the group you will gain partial impunity in Riften - if case of getting caught by the local guards, you can call up your connections to halve the prize for your head. It's especially useful in the beginning part of the game, where you don't have too much gold.

In order to reach the Guild you need to speak to Brynjolf, who can be found at the Riften marketplace or at The Bee and Barb tavern, the entrance to which is right beside. This character is connected with the A Cornered Rat main quest, but in case you haven't got that far in the story, you can focus on completing missions for the Guild itself (A Chance Arrangement).