New main objective: Use the Staff of Magnus to enter the College of Winterhold 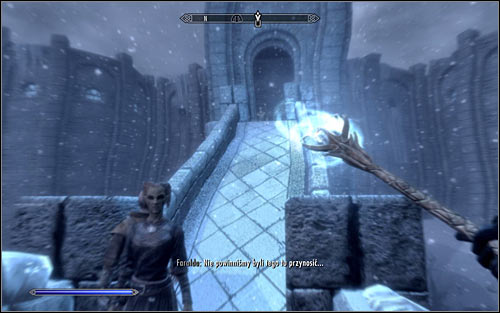 Open the inventory, head to Weapons and set the Staff of Magnus as the active weapon. Approach the barrier surrounding the College and hold down one of the mouse buttons for a couple seconds (screen above) to receive the next objective.

New main objective: Reach the Hall of the Elements 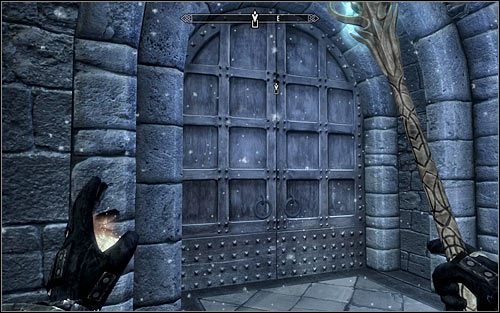 Head towards the College of Winterhold main square. On your way you luckily won't come across any enemies or more barriers. Note: before heading through the gate to the Hall of the Elements (screen above) make sure that you have at least one skill which lets you summon help. It's important, as your party member won't be able to aid you in the upcoming final battle. 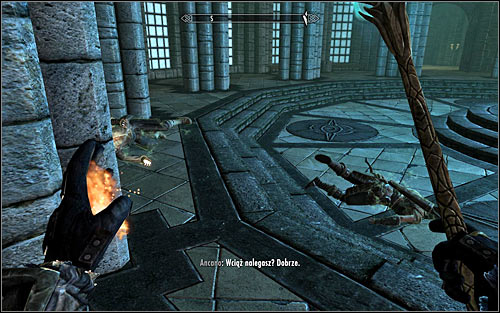 Head to the main room of the Hall of the Elements and approach Ancano. Sadly you can't hope for the fight with the Thalmor to be standard and fair, as Ancano will start off by knock Tolfdir and your party member unconscious (screen above). As a result it's very important to summon a creature for help (e.g. an Atronach), so that it can draw the boss' attention away to a certain degree. 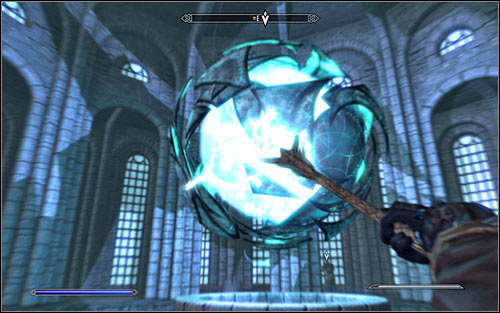 Lack of living allies won't be the only difficulty in this fight, as Ancano will in the beginning draw power from the Eye of Magnus, therefore being immune to your attacks. The Staff of Magnus will come in handy here again, as you will be able to use it to temporarily close the Eye of Magnus. Aim at the magic sphere and hold down the mouse button for a couple second (screen above). Keep using the Staff until you note that the glimmer around Ancano has disappeared, therefore making him vulnerable to your attacks. 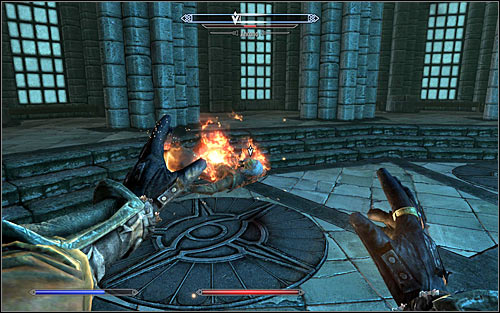 Afterwards you can hide the Staff and equip any weapon or spells you like. Start attacking Ancano (screen above). Unfortunately his attack deal high damage (mainly from lightning), though if you summoned a creature beforehand, there's high chance that the boss will mainly attack it and therefore let you focus on attacking him. 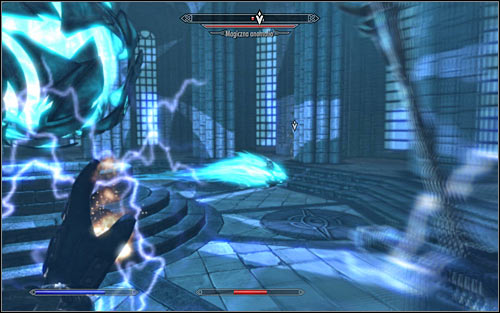 Apart from Ancano, there will also be Magic Anomalies (screen above) flying through the room, though considering the low damage they deal you should probably just ignore them. In case you get hurt badly, retreat to a safe spot using the nearby pillars as cover. Also don't forget to summon a new creature if the old one get killed, so that there's always a chance that the boss will attack it instead of you. 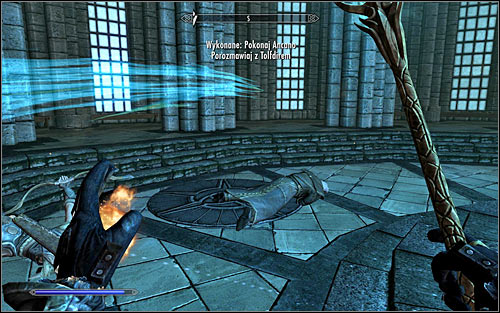 Depending on how experienced your character is, the fight can last anything from 30 seconds to a few minutes. In the latter case, you unfortunately will have to take into account that the eye might open after a short while. If it does, you have to QUICKLY react by using the Staff of Magnus again. At the same time remember that you can power up the artifact with soul gems. Keep fighting until Ancano loses all of his health (screen above). Only after eliminating the Thalmor mage should you move on to eliminating the Magic Anomalies. It will also be made easier thanks to Tolfdir and your party member returning to full strength in the meantime. 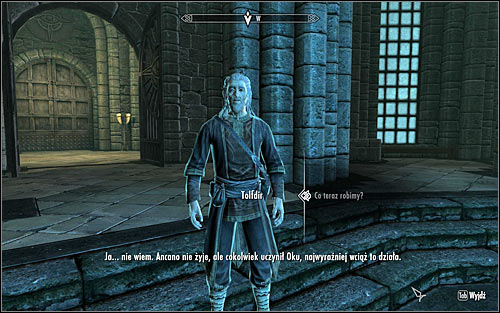 You can now search for Tolfdir and speak with him (screen above). The mage won't know what to do with the Eye of Magnus, but the Psijic order members will arrive to help with this problem. 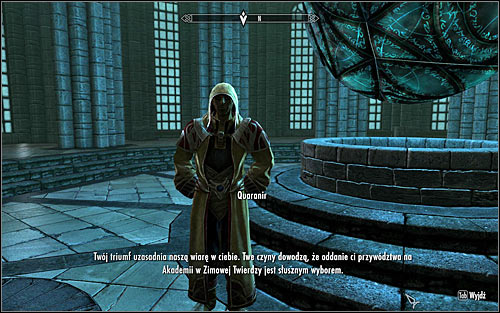 Approach Quaranir, who should appear nearby the Eye of Magnus (screen above) and speak with him. He will tell you that the Order, concerned with the safety of the world, will take the Eye and place it in a safe and well-protected place. Wait for the teleportation to end. 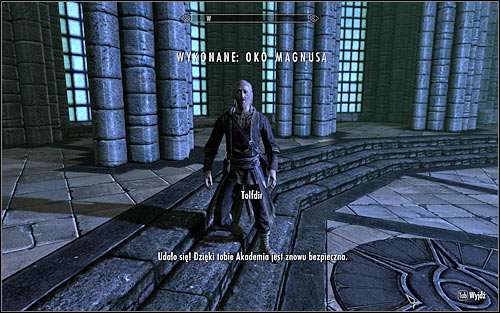 Speak with Tolfdir for the last time (screen above) and he will appoint you as the Arch-Mage and give you the very precious Arch-Mage's Robe. Tolfdir will also let you take the Arch-Mage's Quarters which you should visit at once to find lots of potions, Soul Gems and other valuable items. There aren't any more primary mission to complete, though you should of course also take interest in the College's side mission.