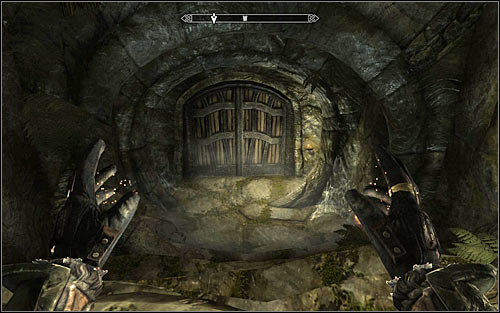 Be careful, as you will come across a Draugr Wight and a Steadfast Ward in the area. Don't move west during the fight, as it would lead to another MP drain. After winning the battle, you can break into the southern room in which you will find some enchanted items or head into the north-west corridor to reach the new door (screen above). 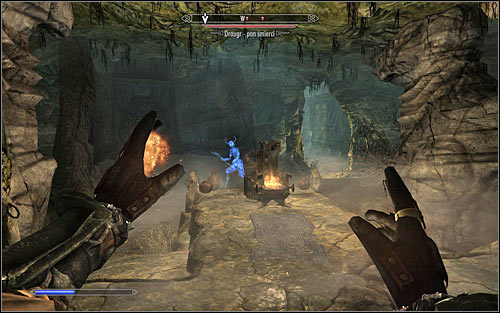 Save your game and only afterwards open the metal door. Inside the next room you will come across a Draugr Deathlord (screen above). Try to keep this monster at distance and don't let it use its power too often. After the battle, approach the Word Wall to learn the Word of Power - Sand, Slow Time. 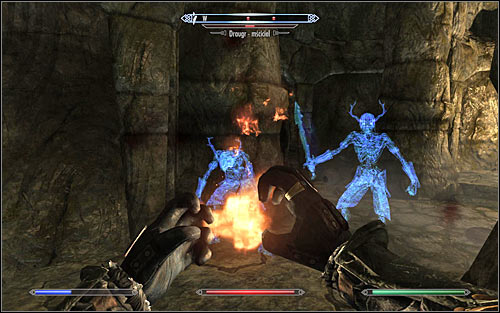 Head west. After reaching a long corridor, be ready to get attacked by new monsters. Your priority should be quickly eliminating the Draugr Scourge (screen above), as he can use magic and summon a Frost Atronach to help. Only after getting rid of the Scourge should you move to the other Draugrs and Skeletons. 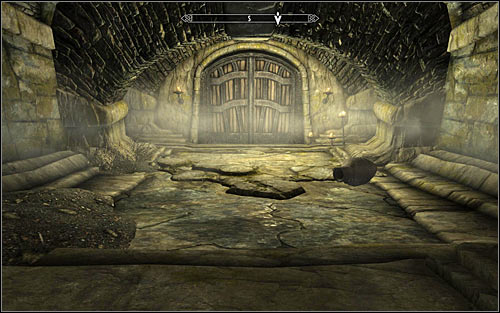 After the fights are over, head to the western room and watch a new cinematic. Search the area and afterwards head south, reaching a big gate (screen above). Open the gate and save your game, as you're in for a fight with Morokei, the main boss in this quest. 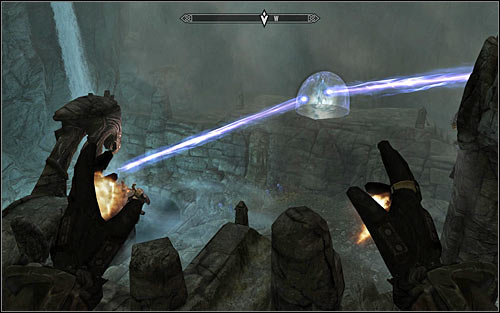 What's interesting is that the boss won't be interested in you at the beginning, so you will be able to carefully plan your attack. Note that he's surrounded by a barrier supported by two other mages. Ignore all of them for now and use the stairs to reach the highest level of the construction (screen above). You will see the advantage of such a decision pretty soon, as not only will you have a very good view of the area, but the risk of the boss suddenly approaching you once the battle begins will be reduced. 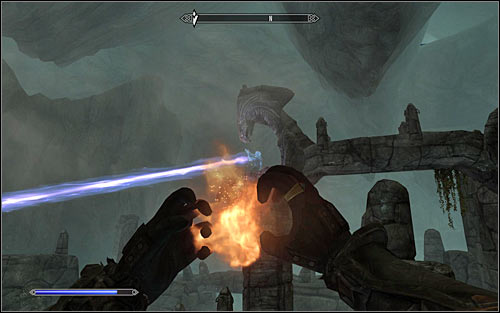 After making all necessary preparations, attack both Enthralled Wizards (screen above). It would be good for each of them to die of one strong blow, so that you won't have to fight them additionally. Once the second mage dies, the barrier around Morokei will disappear and the proper fight will begin. 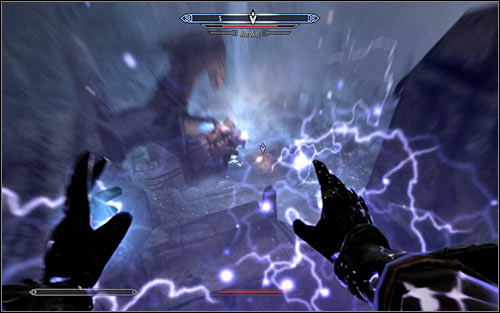 Throughout the fight you will most of all have to keep in mind that the Boss will try to attack you with lightning on a regular basis (screen above). I'd also recommend constantly moving, using protective spells to block the boss' magical attacks and use the fact that you're in a hardly accessible place and get out of Morokei's sight when hurt badly. 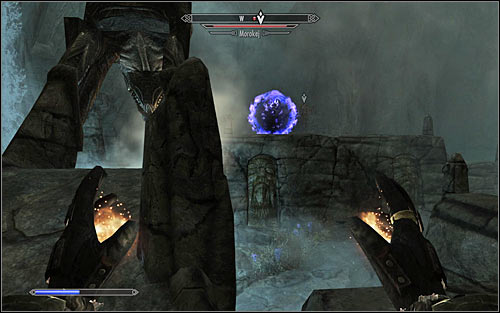 Morokei can also decide to call in an Atronach for help (screen above), making the battle more difficult. If the boss still has much health, you should first take care of the Atronach. Otherwise ignore the summoned creature and focus on eliminating Morokei. 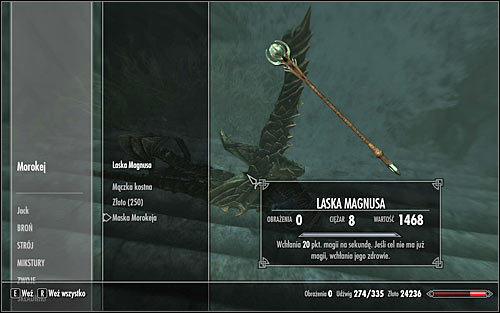 You of course need to fight until draining all of Morokei's health and therefore killing him. Approach his body and examine it to gain the Staff of Magnus (screen above). Apart from that, you should also take Morokei's Mask which is not only a useful item but is also connected with one of the side missions. 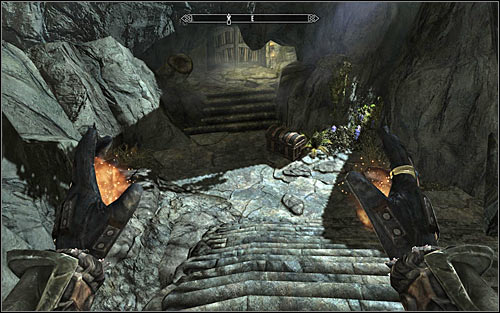 Return to the top highest level of the construction and search the southern part of the room for a path leading east (screen above). There are two chests in the area which are worth examining, as you can get a few really precious artifacts. Open the eastern door and watch the final scene. Afterwards head onwards. 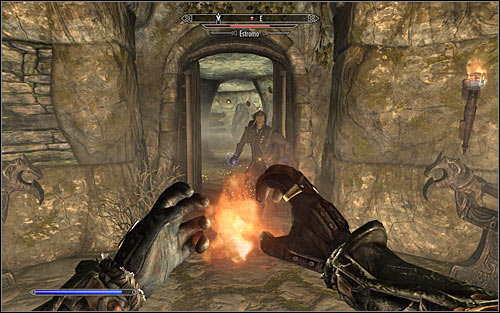 Move the bolt and open the new door. Soon afterwards you should reach a room in which you will come across a Thalmor sent by Ancano, a certain Estromo. After a short conversation, you will have to fight him (screen above). You can attack Estromo before he finishes to gain an advantage. I'd suggest knocking him back with the Unrelenting Force and finishing off with any spell you like. 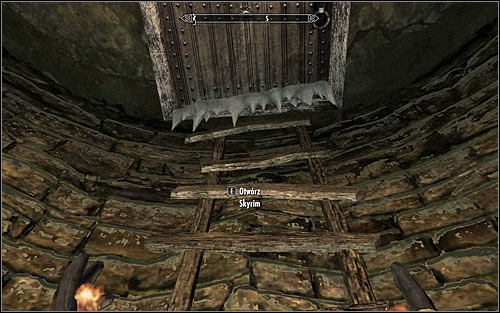 You can take a look around the area or head into the eastern corridor. After reaching the next door, interact with the second bolt. Afterwards approach the ladder which will take you back to the surface (screen above). 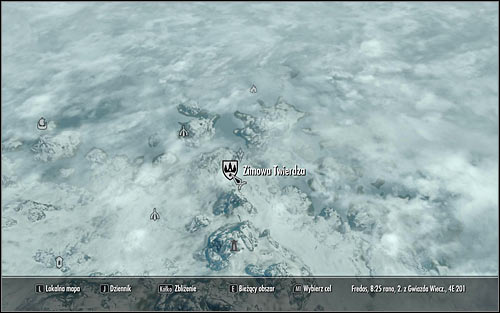 Open the world map and note that the College has disappeared from the list. As a result head to the visited as part of previous quests city of Winterhold (screen above). After getting there, head towards the bridge connecting the city with the College. 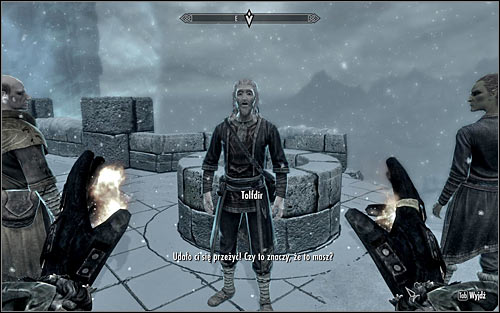 Eventually you should reach a place where the Mages are fighting with an Magic Anomaly. Wait for the battle to end (you can of course help them)) and speak with Tolfdir (screen above). The mage will tell you that Mirabelle died soon after your departure and that the protective barrier now covers all of the College. Tolfdir also hopes that the Staff of Magnus that you gained will help in regaining control over this place.