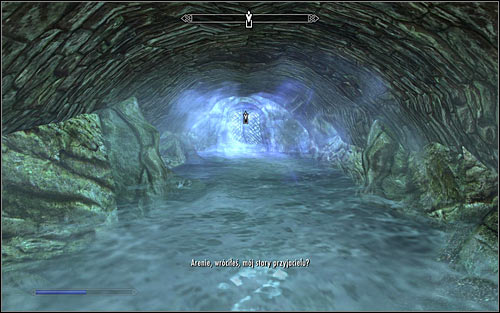 Both paths lead to the mentioned flooded corridor. Ignore the next mana drain, as you won't come across any enemies for a while. Head north and soon you should reach a door leading to the Labyrinthian Thoroughfare (screen above). 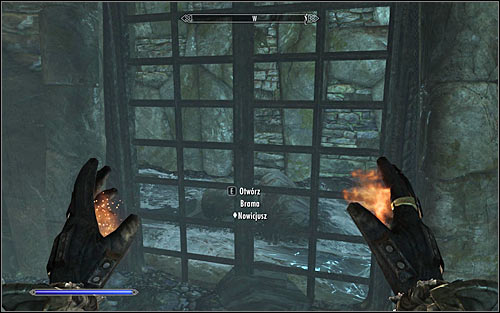 Proceed to exploring the starting area, defeating a Skeleton and a Draugr. You can reach the next location in two different ways, either by choosing the right corridor or opening the left gate (screen above). I'd definitely recommend the latter option, as the gate has a weak lock and opening it will also grant you access to a chest with a few precious items. 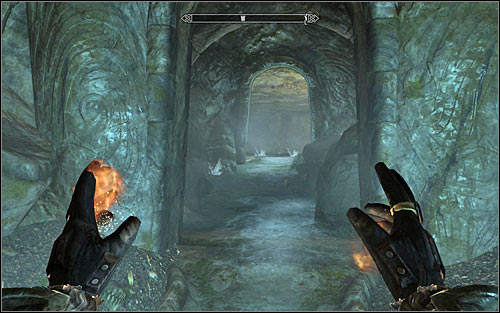 If you chose to go through the gate, you will need to jump down onto the lower level after reaching the new location. If you chose the right corridor, you will just need to go down to the flooded room with a small waterfall. In both cases you will eventually reach a corridor going west (screen above). 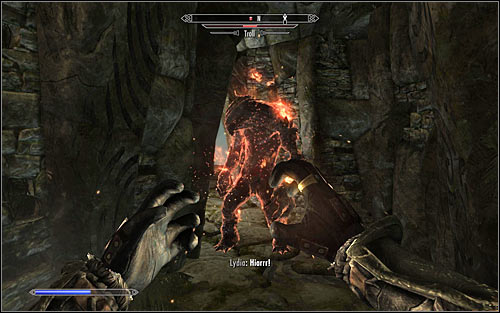 After reaching the new area, look around for a chest and head north. Be careful, as soon you should be attacked by a "normal" Troll (screen above). Just like the Frost Trolls that you came across before, the beast is beast kept at a distance, as it can only damage you in direct combat. Head to the proper cave and start off by dealing with the Skeletons (at least two on both left and right). 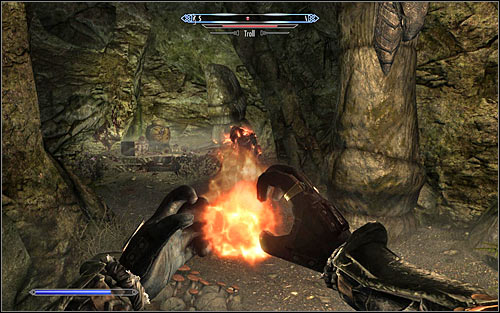 Exploring the western corridor which can be accessed through a long bridge is purely optional. If you however decide to do it, you must look out for new Trolls, as you would therefore reach their lair (screen above). The only reward for defeating the monsters will be the chance of opening a chest with not very interesting treasures. 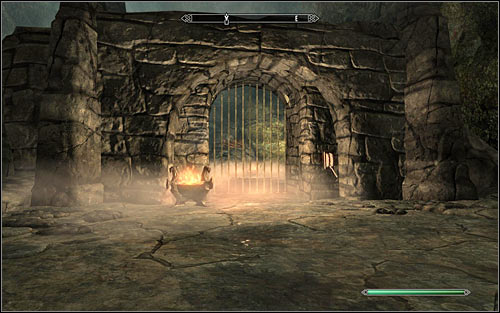 In order to continue on with the quest, you will have to head north-east (screen above) and pull the lever to raise the bars. Make sure to use the stairs on the left, as therefore you will reach a chest with more interesting treasures. Head further north-east, reaching a location with Wisps. 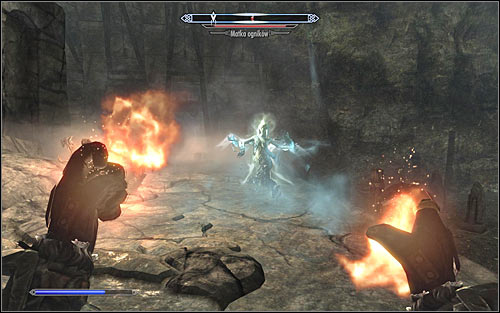 The Wisps will be at first neutral towards you, but you should take care of them now so that they don't trouble you afterwards. Attack them with any spell you want and afterwards move away so that no one else joins them. After taking care of the Wisps, move to the Wispmother (screen above). You need to be careful, as she's capable of dealing serious damage. Also be sure to quickly get rid of the Shades, her clones. Don't move too far to the north-east while attacking the Wispmother, as your magicka could be drained prematurely, unnecessarily making the fight harder. 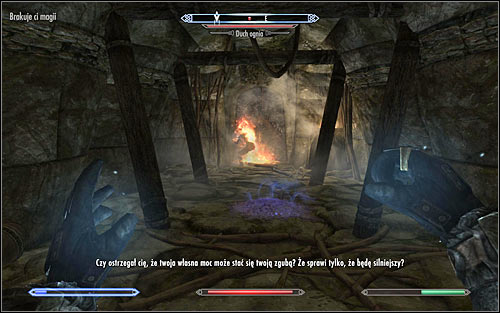 After the battle, head north-east. Approaching the door (screen above) will cause the hero to lose his magicka and a Fire Spirit to appear. Quickly change your spells to a more conventional weapons or regenerate your MP and use ice spells to get rid of the Spirit. Ice spells (e.g. Frostbite or Ice Spike from Destruction) will also let you unblock the further passage. 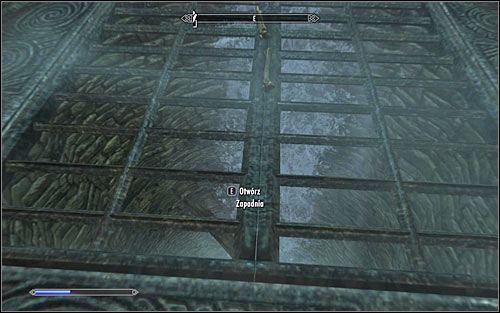 Open the metal gate and watch another scene with the ghosts of the dead Mages. Afterwards head right, eliminating the Skeleton and the Draugr Wight. The next location can be reached in two ways. If you want to leave this place as fast as possible, stand by the waterfall, open the hatch (screen above) and CAREFULLY jump down, first landing on a wooden beam and afterwards on the lower level. 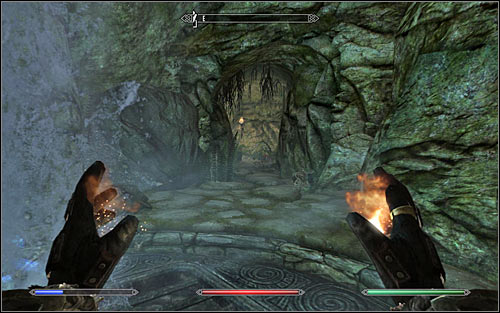 If you don't mind exploring the last part of the Thoroughfare, choose the eastern passage (screen above). Both options will also include Skeletons, Draugr Wights (they aren't much stronger that the standard undeads) and Spectral Dogs (little threat). Regardless of the chosen path, you need to reach the door leading to the Labyrinthian, Tribune. 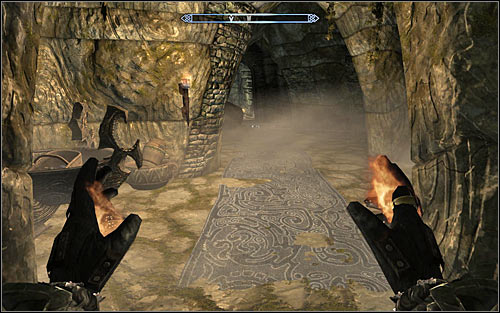 Head east, eliminating at least one Draugr Wight on your way. Take a look around for the Spell Book: Steadfast Ward. Collect it, stand by the western passage (screen above) and destroy the runic trap in the distance. I'd suggest saving your game here, as there's also a second trap here and it can cause some serious damage. 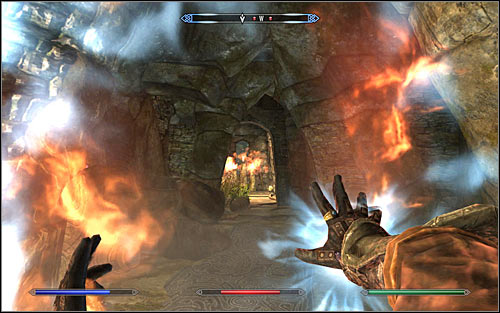 The second trap will launch a ball of fire at you. Theoretically you could avoid it by quickly going to one of the sides, but that would still imply some danger of getting hurt from the flames. Therefore it's best to use the Steadfast Ward or other protective spell. Activate it (by holding down the mouse button) and head onwards (screen above). If you have done everything properly, the spell should absorb the damage. 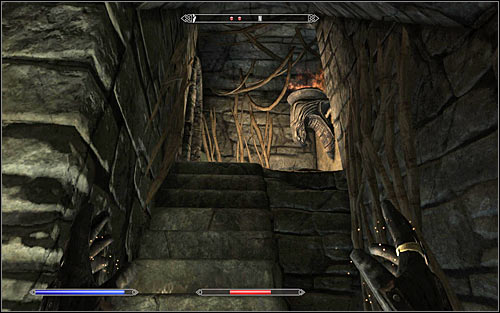 You of course need to be fast with going through the corridor before running out of magicka. Your objective is reaching the northern corridor (screen above) located right from the gems powering the flame ball trap.