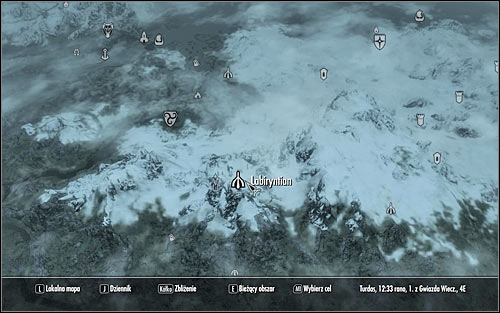 Lave the Hall of the Elements and open the world map. Your destination is a location known as the Labyrinthian (screen above), located in the mountains in the middle part of the map. It might seem that you should begin at Morthal, but as Labyrinthian can be accessed from the south, I'd recommend beginning at Whiterun. Note - before you head to the Labyrinthian, try to improve your lightning resistance and improve your mana regeneration rate with magical items. 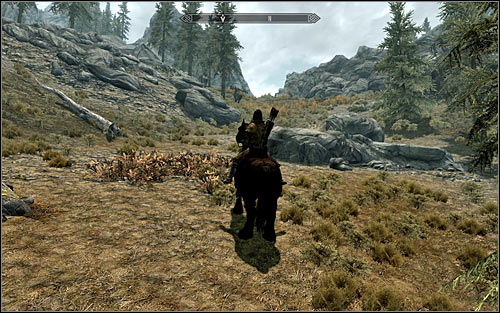 The Labyrinthian is best approached from the south-east, finding a path in the valley (screen above), eliminating the need of a complicated climbing. 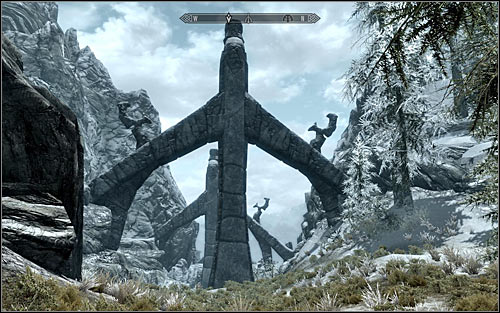 The stone constructions (screen above) will inform you that you're heading in the right direction (north-west). 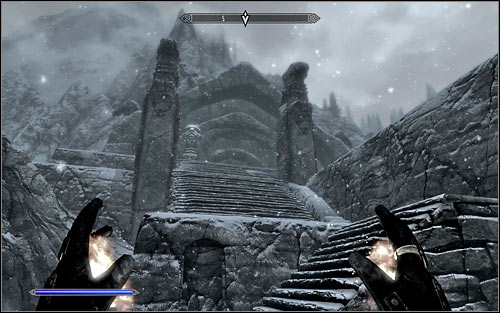 Be careful, as you will come across at least two Ice Trolls at the Labyrinthian. You can try to avoid them, though it's better to eliminate them by using spells based on fire. After clearing the area of monsters, head to the spot marked by the game (screen above) and interact with the ceremonial door, therefore getting inside the Labyrinthian. 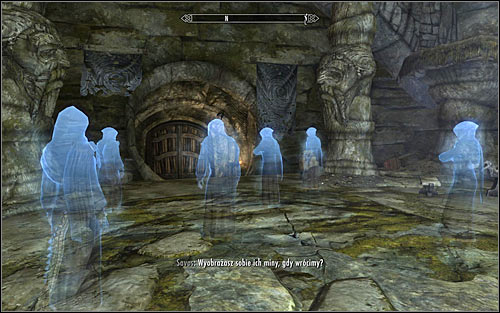 Go slightly north and note that ghost have appeared in the area. You can't interact with any of the ghosts (interestingly, one of them will be Savos Aren), as they're just "playing" past events. Wait for the first scene to end and look around for the Spell Book: Ironflesh. 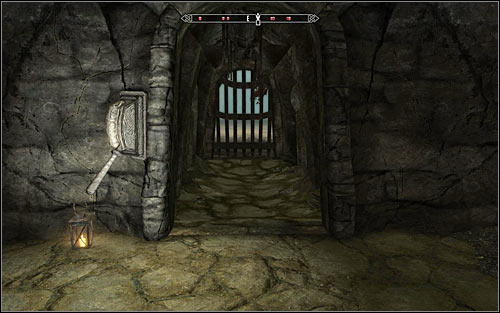 You can now head to the northern door. Follow the only possible tunnel, saving your game after reaching the lever (screen above). Pull it and approach the eastern room (don't get inside!) and you should note that the Skeletons have started going your way. 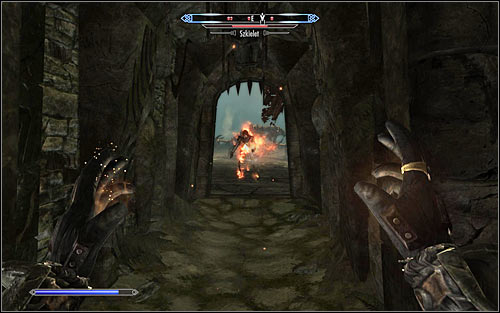 The Skeletons can be eliminated in a very easy way, i.e. by staying beside the lever and pulling it at the right moment. The advantage of such a method is that the gate will each time be raised for only a couple seconds and as a result you will be able to attack single enemies from a distance (screen above), without having to worry that they will suddenly surround you. What's interesting, the gate won't let arrows through and will stop spells casted by the enemies. 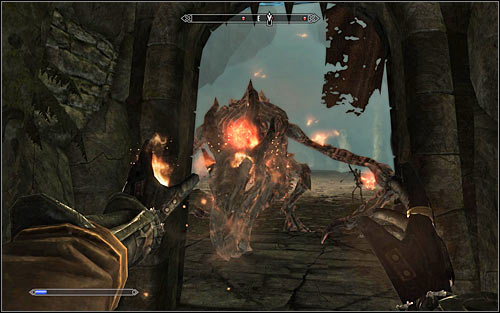 Do the same with the Skeletal Dragon which will soon appear in the room with the Skeletons (screen above). You can of course head to the big cave if you're feeling up to it, but it's of course not necessary. I'd suggest stepping into the new room only after taking care of all the enemies (pull the lever on that side if your party member didn't make it through to the new cave). 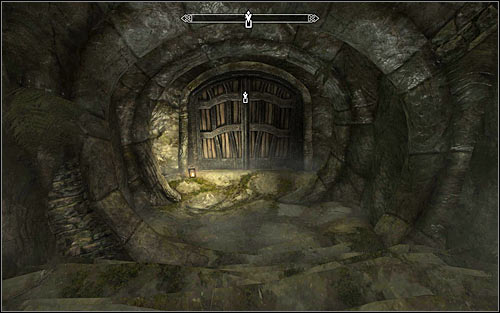 Of course use the chance to take a look around the area, checking out the dragon's corpse (sadly, you won't get a Soul for defeating it). Afterwards head east to witness another scene beside the plate. Go through the door leading to the Labyrinthian Chasm (screen above). 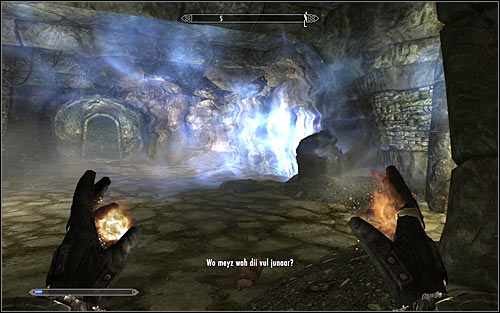 Look around the first area and afterwards choose the southern corridor. Here you will for the first time come across a difficulty which will trouble you through the rest of the quest. Each time you hear the voice of a mage, who's also the last boss, your magic will be sucked out (screen above). I wouldn't recommend using potions in such case, but retreat to a safe spot and wait for it to regenerate, making use of the mentioned equipment that speeds up the process. If your character can do well with melee or range weapons, you can just switch to them and continue fighting without having to back out. 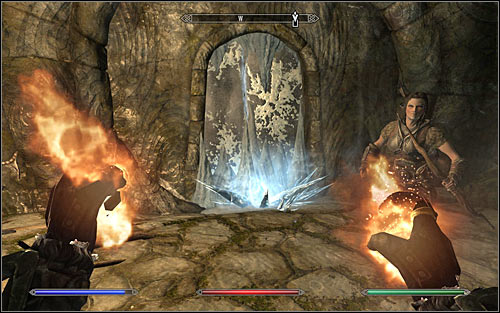 Eliminate the "sleeping" Restless Draugr and the Frost Spirit who will soon appear here (fire is the best method of defeating him). You should also examine the room to find the Spell Book: Flames. Afterwards stand in front of the frozen passage (screen above) and use any fire-based spell to unlock it. It doesn't necessarily have to be Flames, as you can also use, e.g. the Firebolt (they can be found in Destruction). 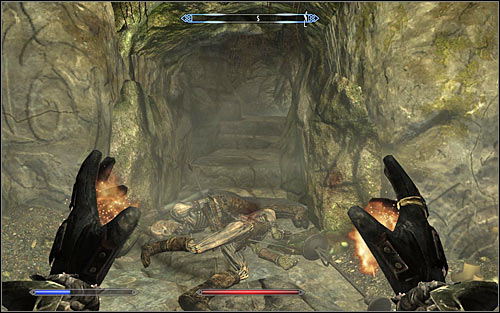 You can now head west, reaching a bigger cave in which you will come across more Draugrs. The undead would be best attacked from a distance, though at least one of them will be an archer. Go down. Exploring the southern corridor (screen above) is optional, but it's well worth the time. After reaching the door, destroy the runic trap from a distance, head inside and kill the last Draugr. Apart from an Alchemy Station you will also find a treasure chest and the Spell Book: Equilibrium. 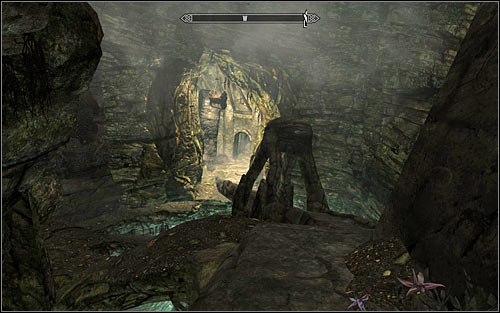 Return to the main cave and start jumping down onto the lower platforms, ultimately heading west (screen above). Don't rush here, as the mage will once again drain your magic. You can reach the door to the next location in two ways. One option implies going down the ramp and therefore reaching a flooded corridor. 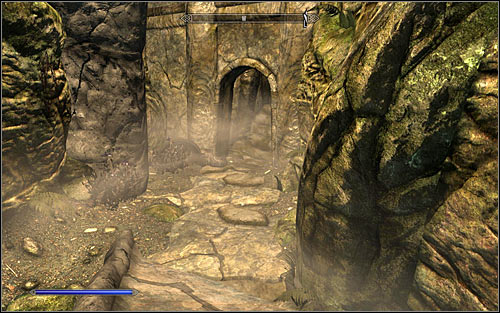 The second option on the other hand implies going into the western corridor after crossing the bridge (screen above). On your way you will come across at least a couple Draugrs, but there's also more treasure to be found. If you want to choose this path, turn right before reaching the flooded corridor, finding a corpse and multiple valuable treasures.