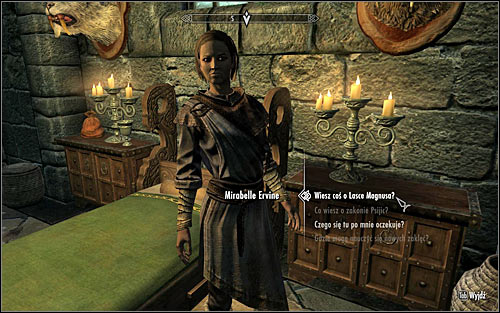 Mirabelle, depending on the time of day, can be found on the main square of the College, in the Hall of the Elements or in her room at the Hall of Attainment. Speak with her and ask about the Staff of Magnus (screen above). The woman won't be entirely confident, but will mention the mages of Cyrodiil, representing the organization known as Synod and will point you to the ruins of Mzulft. 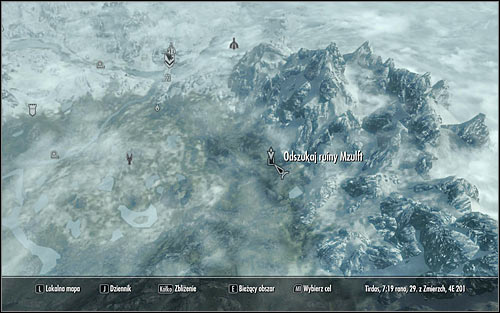 Open the world map and find the destination point (screen above). The ruins of Mzulft are located in the eastern part of Skyrim and if you haven't discovered it yet, it would be best to begin in Kinesgrove. Head south-east, looking out for Wolves, Bears and Giants on your way. 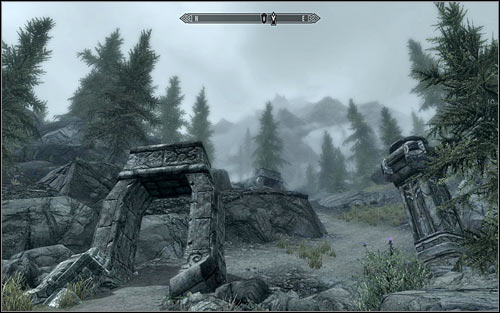 If you decide to stay on the main track, around south-west of the ruins you should find a path with remains of ancient buildings (screen above). Follow it to reach the large gate leading to Mzulft. 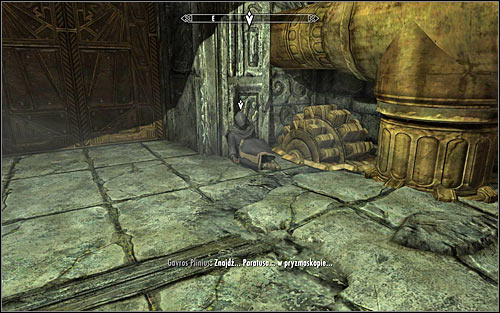 You will complete the objective very fast, as you will come across Gavros Plinius, one of the Synod researchers right after getting inside the ruins (screen above). Listen to what the dying mage has to say. He will mention a certain crystal and send you to meet with some Paratus. Use the chance and search his body, taking the Mzulft Key and Research Log which you can check out from the inventory level. 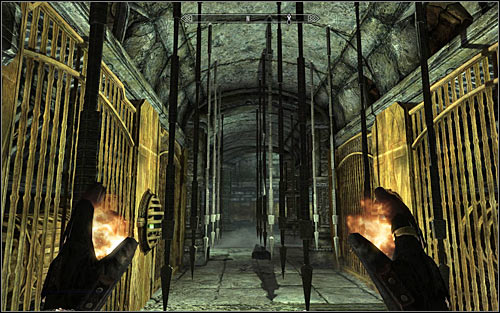 Use the key you just collected to open the second large gate and head forward. Soon after you turn north, avoid the pressure plate that causes blades to move out from the ceiling (screen above). A bit further you will find the corpse of the second researcher. Checking out the further Mages bodies in purely optional, as you won't find any crucial items beside them. 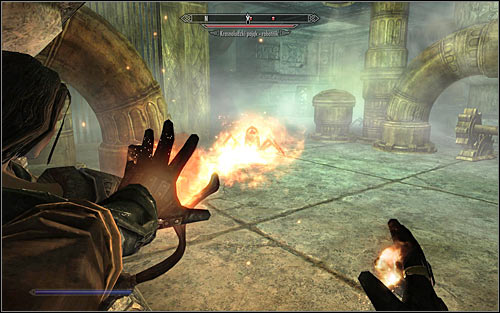 Look out, as pretty soon you will be attacked by Dwarven Spider Workers (screen above). The machines don't have any particular weaknesses, but are resistant against ice so you will have to rely on spells and items of other elements. After the battle, resume exploring the ruins and head east. 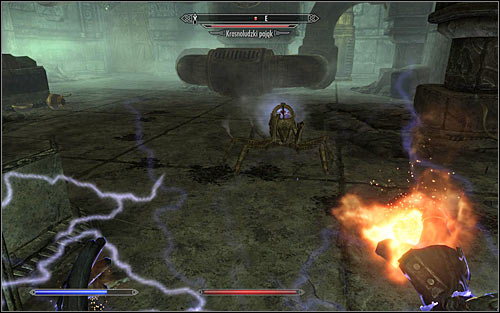 Inside the next room, apart from a Spider Worker you will be attacked by a rightful Dwarven Spider (screen above). You should increase your thunder resistance before the fight and try to keep the spider at distance after the fight begins. Exploring the area behind the northern door is purely optional and you would also have to look out for a trap, standing a bit on the side of the door when opening it. In order to reach the further part of the ruins, you must choose the eastern door. 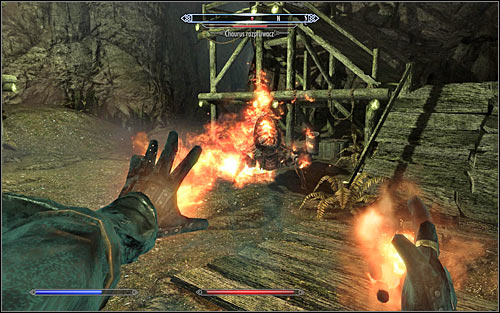 Look out for another Dwarven Spider that you will come across soon enough. Destroy the machine and head through the northern door. Save your game, as you soon will face a Chaurus Reaper (screen above). Use all of your strongest spells against him and look out for the monster's range attacks. Two more researcher bodies can be found in the area. 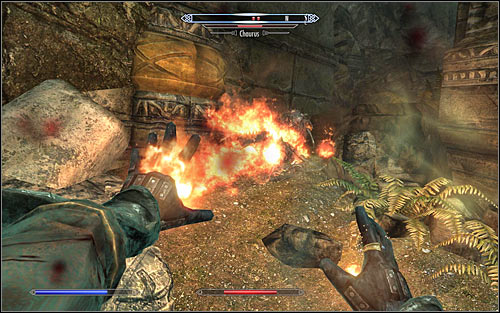 Head north, but look out for a line trap that will cause an avalanche. Soon enough you should come across two "standard" Chauruses (screen above), against which you should use AoE spells. Head north, reaching another door. Further to the north you will have to turn east, saving your game on the way. 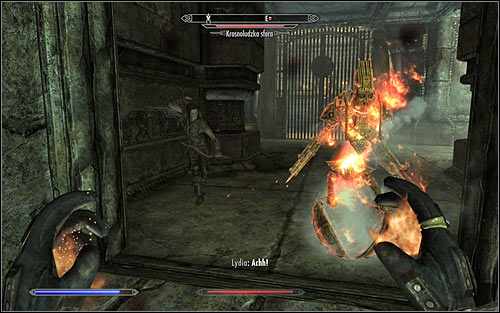 After getting upstairs you will be attacked by a Dwarven Sphere (screen above). The machine is very effective in direct combat, so it's crucial to keep it at distance and slow down if possible. You also need to use your best weapons and spells, as the Sphere is very resistant as well. Afterwards picklock the eastern gate or head north. 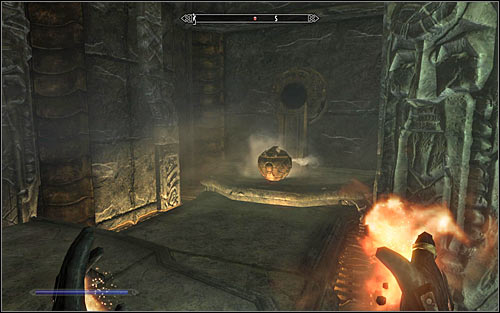 Go through the new door, eliminating a Spider Worker on your way. Be careful, as soon enough another Dwarven Sphere will jump out of one of the side holes (screen above). The overall tactic stays the same, so don't let the Sphere get anywhere near you. Move onwards. Inside the next room, eliminate a Spider Worker. Depending on your liking, you can either take a look around (the locked gate on the lower level) or just head to the northern gate. 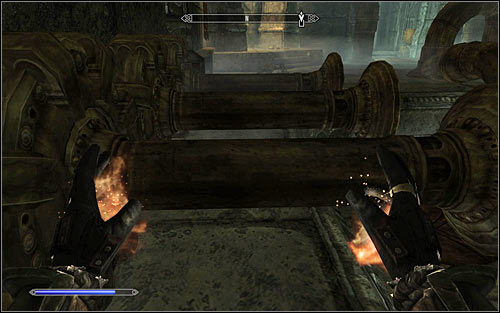 Be ready for a third Dwarven Sphere, attacking it when only it appears in the distance. You target is reaching the northern part of the room, but be careful after standing on the pressure plates (screen above), as they turn on the machinery. If you get pushed down, you will need to eliminate two additional Dwarven Spiders. After getting pass the traps, choose the northern corridor, look for chests on your way and soon enough you should reach the Mzulft Boilery. 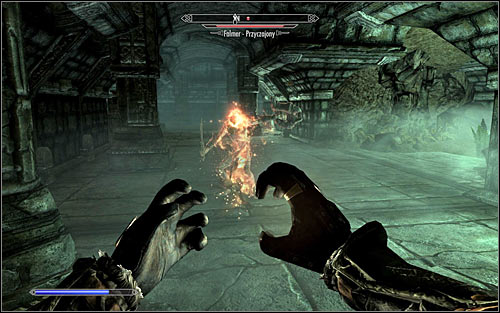 Head east. Soon enough you should come across the first Falmer (screen above). In it's your first encounter with this monster type, here's some basic info about them. Falmers can be either warrior, archers or mages. They are also very agile and more resistant than standard enemies, meaning you have to stay in constant motion and quickly heal if needed. 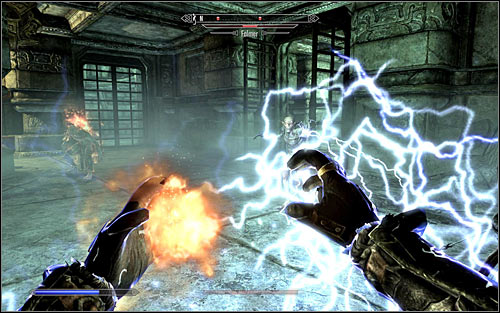 Now head north-east, choosing any path you like. You will come across another Synod researcher's body on your way. Be ready to eliminate another Falmer Skulker. A bigger group of Falmers will attack you after you reach one of the northern rooms and during that battle you should firstly deal with the monster capable of using magic (screen above). Only after it's dead should you move to the others. Afterwards you can explore the western storage room (master lock), though inside you would find only destroyed dwarven machinery.