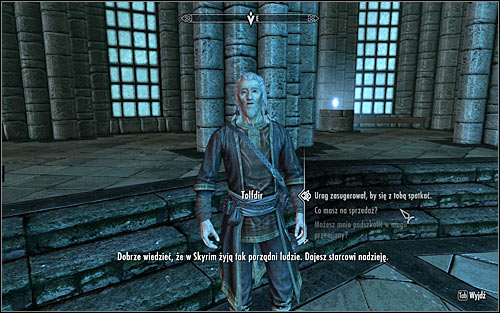 In order to speak with Tolfdir, you luckily won't have to return to the excavation site, as in the meantime he should have returned to the College. The Mage will probably be at the main square or in the Hall of the Elements. Initiate a conversation and tell Tolfdir that Urag gro-Shub sent you (screen above). 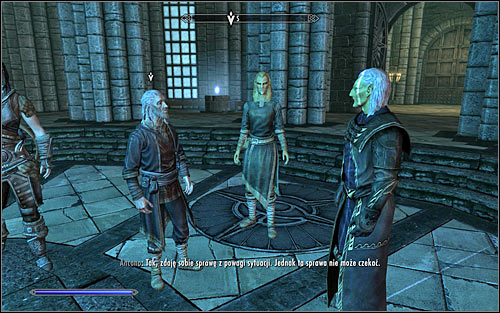 Tolfdir will now take a tour around the area and it's definitely worth to listen to what he has to say. His monologue will inter alia concern the strange marks found on the sphere. Soon Ancano will appear as well (screen above), who will state that you need to immediately head with him somewhere. 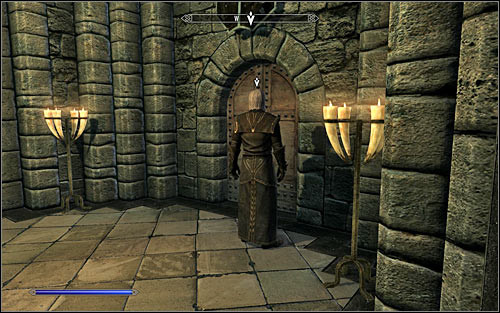 Listen out to a short conversation with Ancano, from which you will learn that a member of the Psijic Order came to the College and wants to speak only with you. Follow the Thalmor, who should lead you to the entrance to the Arch-Mage Quarters (screen above). Open the door to head inside. 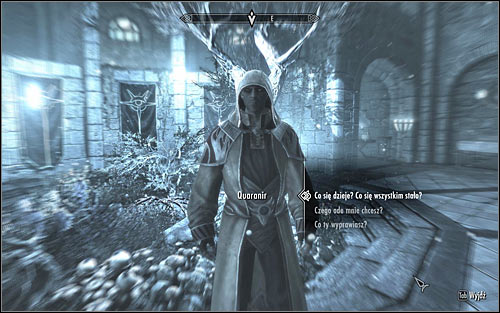 Head to the middle part of the Arch-Mage Quarters and don't get surprised by the strange graphic filter, symbolizing time stop. Approach Quaranir and talk with him (screen above). Quaranir will tell you of the sphere found at the excavations, known as the Eye of Magnus, and the dangers connected with its presence at the College. The monk will also tell you that he's worried that the Eye might used for wrong deeds and that you should look for the Augur of Dunlain. After the "vision" ends, you can listen to a short conversation which will be joined by Ancano. Afterwards Quaranir will leave the walls of the College. 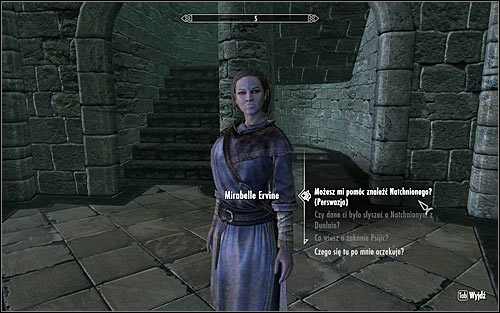 You can ask almost any Mage in the College for the whereabouts and details regarding the Augur of Dunlain, though real information can be gained only from two characters. The first of them is Mirabelle Ervine, although in this case you would need to have a very well developed Speech and try to convince her to tell the truth (screen above). 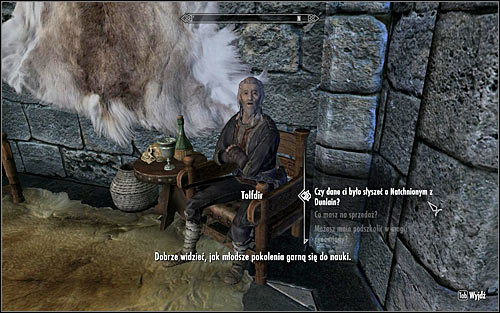 If you don't want to complicate things too much, you can return to Tolfdir (screen above), who will share his knowledge of the Augur of Dunlain without any problems. Both characters mentioned above will tell you that in order to find Augur you will need to head to the abandoned area known as the Midden, found below the College. 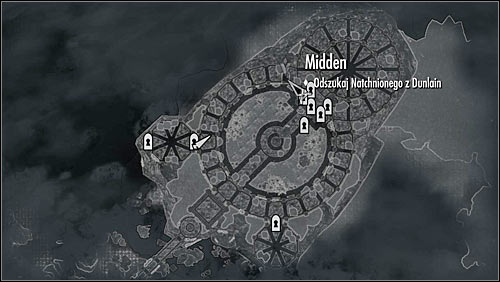 The Midden can be reached by using one of two hatches. The first can be found on the main square of College of Winterhold (screen above). 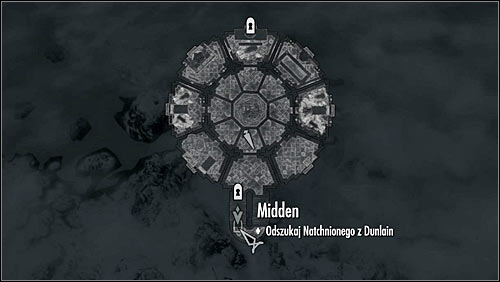 The second hatch is below the staircase in the Hall of Countenance (screen above). 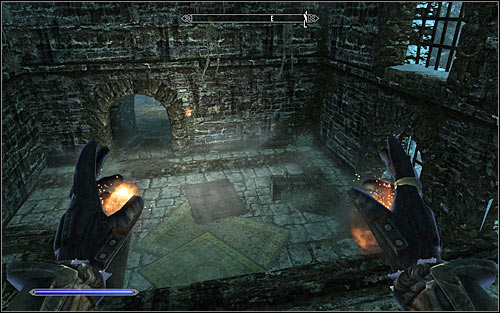 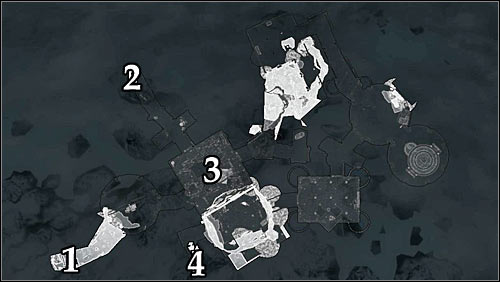 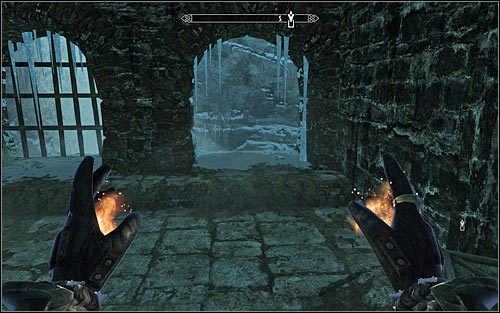 Depending on your liking, you can either explore the eastern part of the current location, or head south and jump to the lower level (screen above). Be careful, as the area is guarded by an Ice Wraith (you should consider using fire spells) and a Restless Draugr. Regardless of the chosen path, look for the door leading to the Midden Dark. 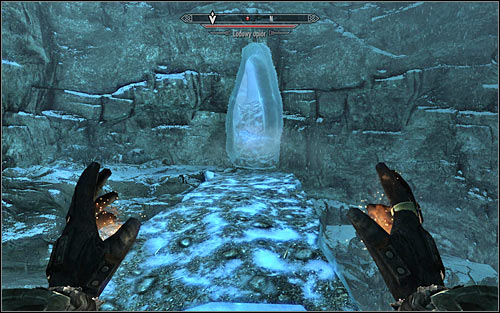 Head east and afterwards turn north to reach a small bridge (screen above). Be careful, as you will be probably attacked by another Ice Wraith. Don't jump down, but head north. Soon enough you should reach a fork in the road, where you will have to go left (west). 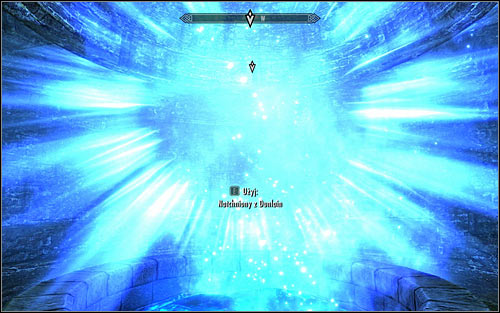 Approach the locked door and don't worry that you don't have a key, as you will be let in after a few seconds. You will have a rather unconventional conversation with Augur of Dunlain (screen above). Listen out to the monologue, from which you will learn that Ancano also visited this place. Augur of Dunlain will want to share knowledge that might save the College with you, therefore sending you to find the Staff of Magnus, an artifact that lets one see through the Eye of Magnus. 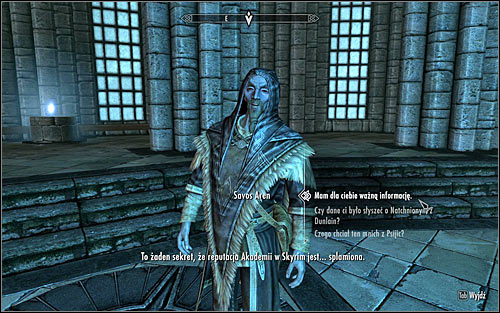 You can leave the Midden either by following the same way or explore the previously ignored right corridor and return to Skyrim after a few minutes of exploration and a couple fights. After getting back to the College, check the Hall of the Elements, as that's where the Arch-Mage should be (screen above). Savos won't know where you should search for the Staff of Magnus and as a result send you to Mirabelle. He will also give you a reward for completing the quest, in the form of a Mage's Circlet.