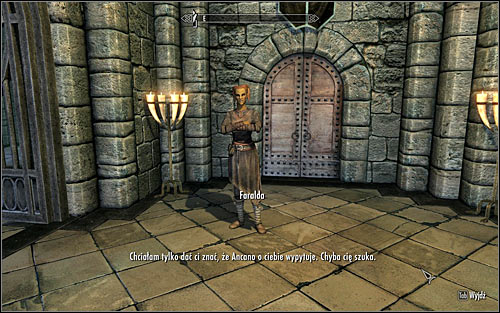 Get out of the Arch-Mage Quarters. After returning to the Hall of the Elements you might be stopped by Faralda (screen above), who will inform you that Ancano is looking for you. She will also suggest that you shouldn't share important information with him, as rumour has it that he's a Thalmor spy. Luckily you don't have to look for him on your own, as you will come across him in the further part of this quest. 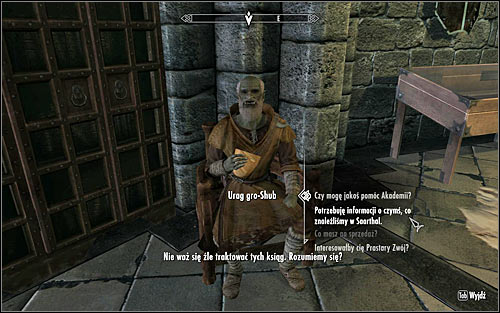 Open the right door in the Hall of the Elements, the one leading to Arcanaeum. After getting there, look for Urag gro-Shub and ask him if he has any information regarding the excavations finding (screen above). Unfortunately the mage won't have anything for you, though he will direct you onto the trail of a certain Orthorn, who has stolen a number of precious books from the College and ran with them to the Fellglow Keep, with the intention of joining the Warlocks. 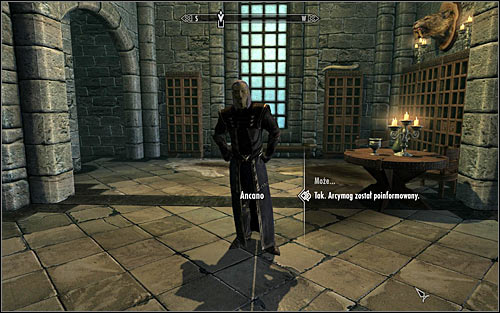 Turn around and try getting out of the Arcanaeum and you should come across Ancano, who Faralda might have spoken to you about (screen above). The choice of dialogue option doesn't pay much role here. Whether you end the conversation at once or move on to the topic of gossip regarding Ancano has no meaning as well. 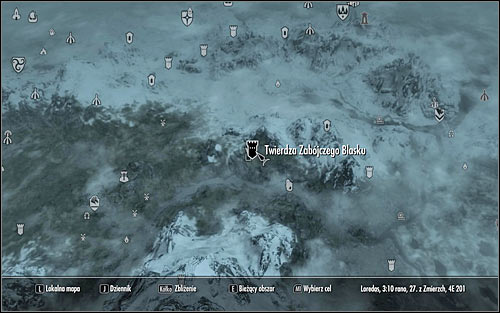 Leave the College and open the world map. Your destination is Fellglow Keep (screen above) and you can of course use fast travel if you already were there. Otherwise, you will need to plan your journey, beginning for example in Whiterun and heading north-east. 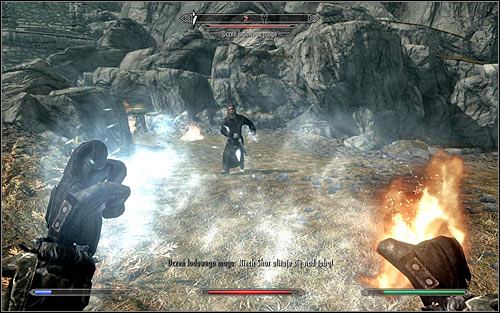 The keep is in the mountains, so look around for a gentle slope so that climbing doesn't prove too difficult. After reaching the destination you will be forced to fight your first battle. I'd suggest starting off by attacking the Fire Mage and Ice Mage (screen above). Keep an eye whether the enemies are trying to block your attacks with defensive spells. Don't attack them when they do, unless you have some methods of breaking through. 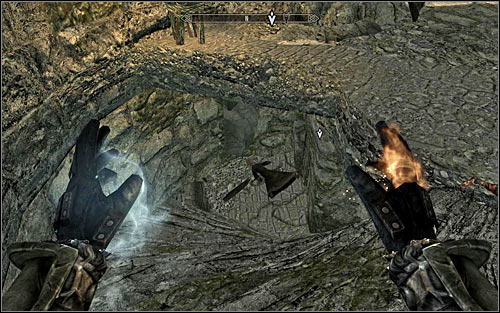 I'd recommend leaving the Flame Atronach for the end, as the creature won't be willing to get away from the Keep too much and therefore there's a chance it won't join the battle with the mages. Of course remember not to use fire spells against the Atronach, as he's resistant against them. Afterwards examine the corpses and look for as set of stairs (screen above) leading to a door. Opening them will move you and your team to Fellglow Keep Dungeons. 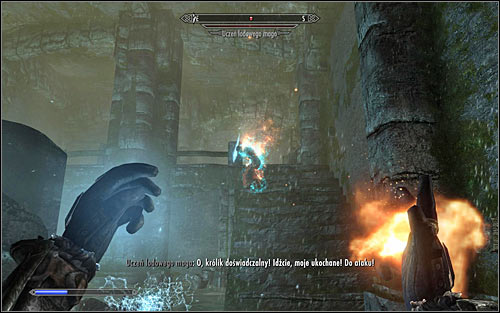 Head east, looking out for the bear snare on your way. You will come across the first group of enemies after reaching the big cave. Attack the Ice Mage (screen above), but also look out for the Frostbite Spiders and don't let them get too close. Go up the stairs, examine the mage's body and use the south-east passage. 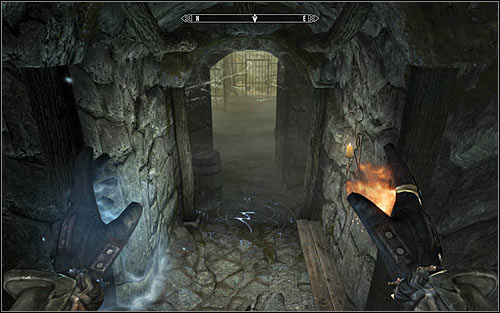 Look out for the pressure plate that you come across, as it activates a trap (poison arrows). Examine the room south-east from here, or head north-east at once (screen above). Be careful, as there's a runic trap in the area, which you should of course try to destroy from a safe distance. 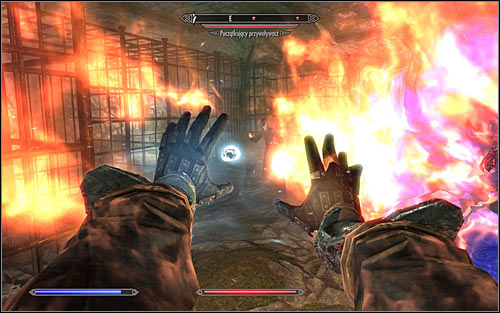 Start attacking the Warlock in the adjoining room (screen above). It's important for him to die as fast as possible, as otherwise he might summon a magical underling. If he does, stick to attacking the mage as the summon will automatically disappear once he dies. 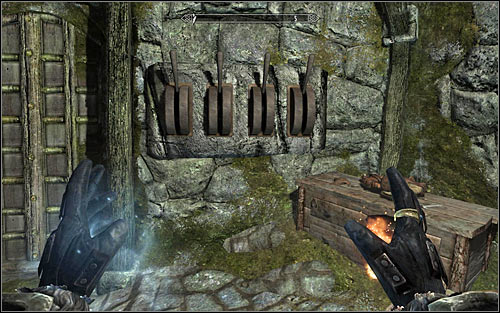 As you have probably noticed, Vampires are imprisoned in the dungeon and you can use it to your advantage. Find the four levers that open the Vampire cages (screen above) and set them all free. The Vampires won't attack you, instead heading to the neighbouring room. 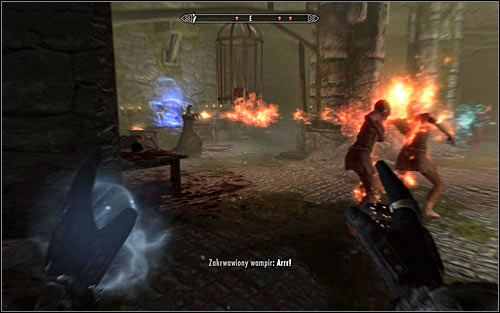 Join the Vampires which should now be fighting with the Mages (screen above). You can help the Vampires, though there's always the risk of hitting one of them, in case of which he would attack you automatically. Regardless of how much the Vampires helped you, you need to secure the whole room. Examine the bodies and afterwards use the north-east passage. 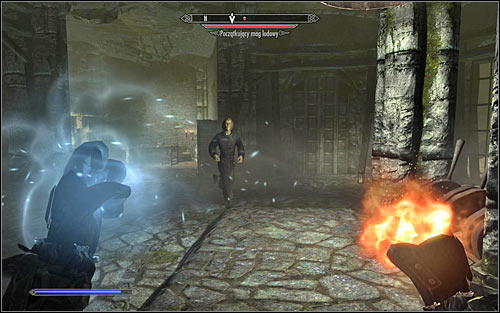 Go through the narrow corridor to the next room of the Dungeons. Here you will come across an Ice Mage (screen above), who upon seeing you will rush to the lever that opens the cells. If you manage to kill the mage before he reaches it (a spell that would push him or for example the Unrelenting Force Shout would come in handy), he will be your only worry. Otherwise you will also have to fight two Wolves.

After the fight, approach the levers and open the middle cell. Approach Orthorn, who has been held captive here, and speak to him (screen above). The Mage will tell you that the books you're looking for are now in possession of The Caller. In the end you should agree for him to join you. Note that he will be counted as a separate ally, so you won't have to give up on your current follower and therefore will be able to have two of them. 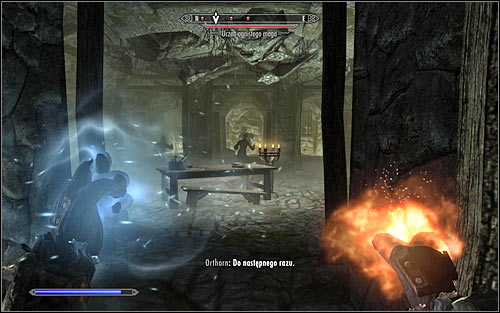 Before you leave this part of the Dungeons, you can take a look around the area to find, inter alia, a closed door with a locked chest containing some precious treasures behind it. Wanting to continue exploring the Dungeons, open the north-east door. I'd suggest moving silently here, as therefore you will be able to surprise the Mages practicing spells in one of the further rooms (screen above). During the battle look out for the Storm Mage, especially if you don't have high lightning resistance. 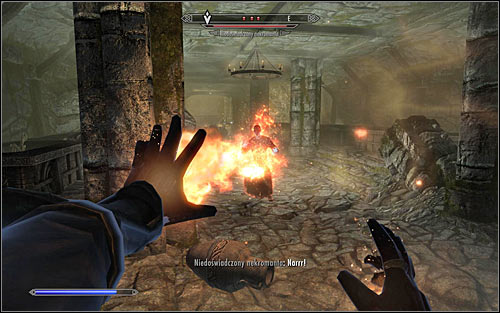 Afterwards take the stairs leading north-west. Orthorn justly warn you of the nearby Necromancers. After entering the new area, focus solely on attacking them (screen above), thanks to which they will resurrect only some of the nearby Skeletons. Take care of the undead only after the Necromancers are dead and therefore there's no risk of more of them getting raised. After getting rid of all the enemies, don't forget to examine the Necromancers' corpses. You should also note the Spell Tome: Raise Zombie lying on the altar. Afterwards go through the door leading to Fellglow Keep.