On this page of the guide to TES V: Skyrim you will find the walkthrough for the further sections of Skuldafn as part of the main quest The World-Eater's Eyrie. Inside the temple, the hero will have to solve new puzzles and battle more monsters (m.in. a Draugr Overlord). The ultimate goal of visiting the temple is to reach an area with an active portal. 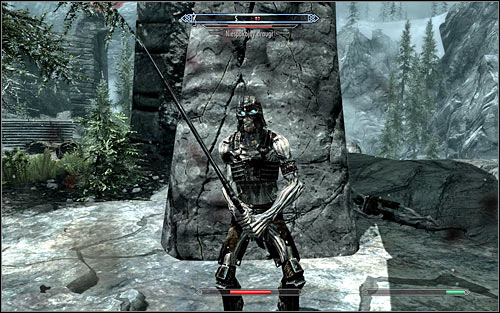 Odahviing won't take you directly to the temple, but drop you off by the path leading to it. I'd recommend saving your game, as you're in for a series of quite demanding fight. Head east. Temporarily ignore the hostile dragon that will appear above the area and focus on the other monsters. Apart from a "normal" Draugr you will also encounter three Restless Draugrs (screen above). Attack them one at a time, especially looking out for the one capable of using magic. 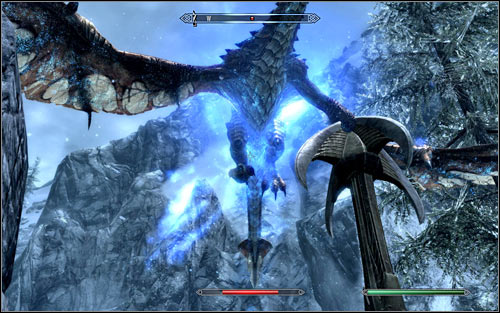 Take care of the dragon only after eliminating all the Draugrs, so that they won't disturb you. During the fight, you should most of all remember about using Dragonrend to force him to land (screen above). If your character doesn't have high fire resistance, you should also look out for the fire attacks. The local ruins will come in handy, as you can use them as cover. Fight the dragon using your favourite tactic until you slay him. After the battle, of course absorb the soul and search its body. 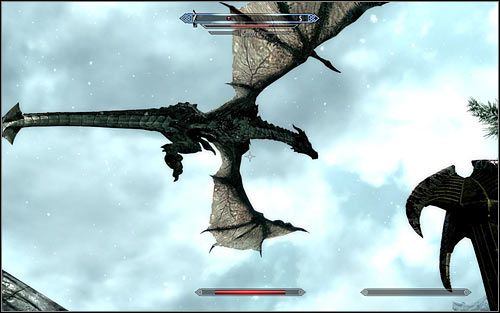 Now head south. You need to stay cautious, as you will soon be attacked by a second dragon and he, for a change, will attack you with ice attacks (screen above). Just like before, it's a good idea to use the Dragonrend Shout. Also don't forget to avoid the dragon's ice attacks by hiding behind the nearby covers. After the battle, absorb the dragon soul, check its body and head further south. 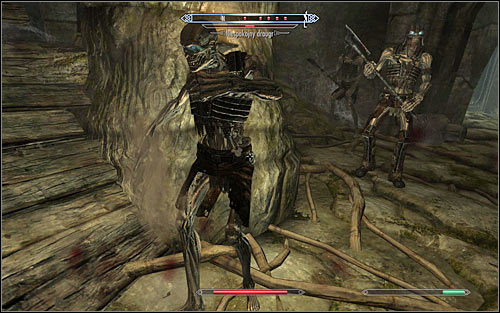 On your way you will come across the entrance to Skuldafn South Tower. Exploring it is completely optional, though you should consider it, as you won't be able to return to this location later on in the game. Inside the Tower, you will encounter Draugrs, Restless Draugrs and Draugr - Wight (screen above). Be especially careful with the last one, as he's noticeably stronger than the other monsters. Considering the small battlefield, you should use the Unrelenting Force Shout often, especially if you want to avoid direct combat. After eliminating all the Draugrs, go up the stairs and examine the chest to find a couple valuable items. 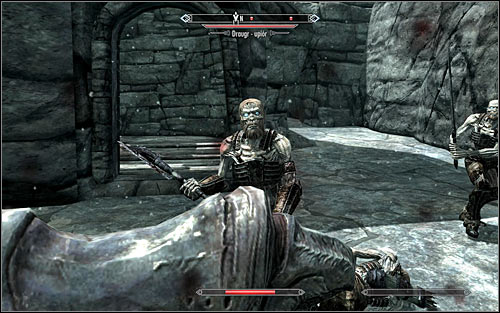 Regardless of whether you decided to explore the Tower or not, you need to head east and afterwards turn north. On your way, you will regularly come across new monsters. The common Draugrs shouldn't pose too much of a threat, though you should consider eliminating the archers from afar. The Restless Draugrs will be a bit harder, though you should especially look out for the Draugrs - Wrights (screen above), as even a slight mistake can cost you a lot. Try not to move forward too fast, so that you don't end up fighting too many monsters at the same time. 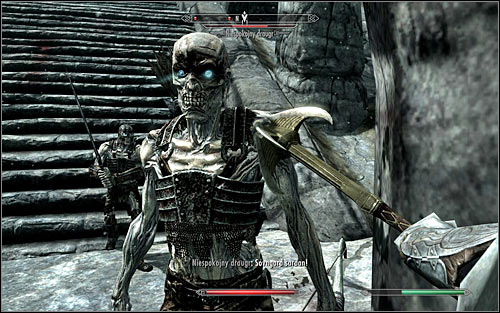 You will probably come across the last group of Draugrs after reaching the stairs leading to the main temple gate (screen above). Just like before, keep an eye on the Draugr - Wight and don't let him surprise you. Luckily, eliminating the other monsters in this area shouldn't cause you that much trouble. Don't however worry about the compass showing additional enemies in the area as you will be able to take care of them only after reaching the temple roof. 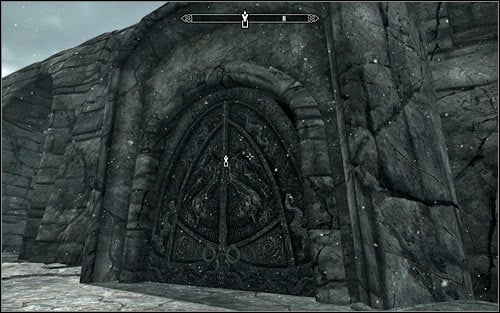 If you want, you can now return to the Skuldafn North Tower, using the fact that you reached the upper balconies. Doing so is completely optional and unfortunately you can't hope for treasure comparable with the ones in the South Tower. The same implies to the altar guarded by the Draugr-Wraight. When you're ready to continue the main quest, head to the entrance gate to the Skuldafn Temple (screen above). 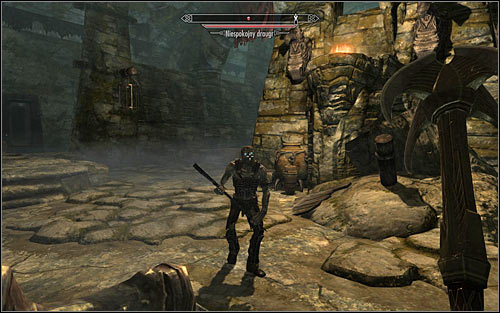 During your travel through the temple you will regularly come across previous items, so thoroughly explore each visited location. Head north. It's better to choose the corridor on the right, as the left contain pressure plates activating traps. On your way, be ready to eliminate a couple Restless Draugrs (screen above), who will luckily attack you in certain intervals. Soon you should reach a bigger room. There, start off by eliminating the magic-using Restless Draugr and afterwards deal with the two normal Draugrs. 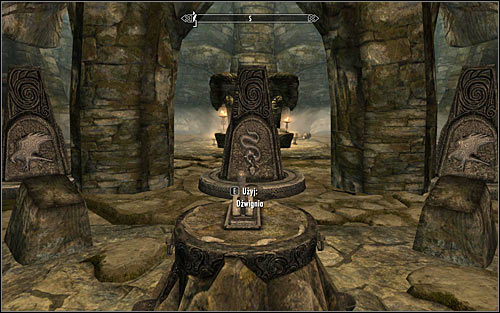 Now you will have to solve the first puzzle in this location, consisting of three interactive pillars located in the middle part of the room. Start off by approaching the western pillar. Turn it so that the fish sign is turned towards an identical one on the western wall. You need to do the same with the eastern pillar, i.e. the snake sign has to point towards and identical one on the wall. In the end get to the middle pillar and make the snake sign point towards the northern lever. Approach the lever and look at the pillars. They have to be arranged as seen on the screen (screen above), so from that perspective the left pillar has to show an eagle, the middle one a snake and the right an eagle. 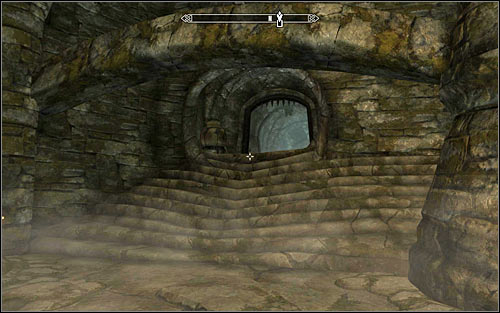 Pull the lever and note that therefore you have unlocked a passage in the north-west part of the room (screen above). If you now want to additionally unlock the right grate, you would have to turn the middle pillar so that instead of a snake, as seen from the lever, it would show an eagle. It's however completely optional, as you would only gain access to a chest with mediocre items. Therefore its' best to just follow the north-west passage. 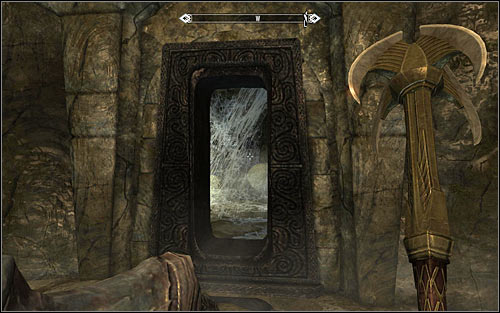 After reaching the new tomb, start off by dealing with the magic-using Restless Draugr. However be ready that more Draugrs will soon try to surprise you, breaking through the walls of the nearby tombs. Make sure you eliminated all the monsters and only afterwards head through the western passage (screen above). Soon you should come across Frostbite Spiders. Eliminating them shouldn't be difficult, though one of the spider will be much more resistant than the others. 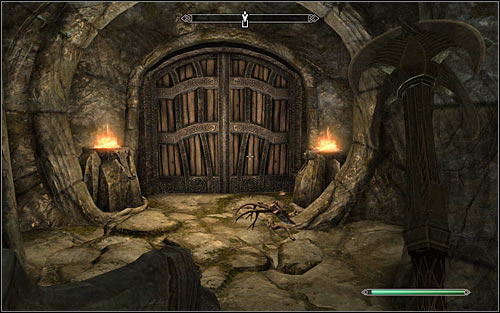 Head east, using any weapon or magic to create a passage by destroying the spider-webs. Be ready for eliminating more Frostbite Spiders on your way. Additionally you will have to destroy some webs to gain access to the southern chest. Eventually you should reach a door in the east, leading into a bigger room (screen above). There, you will have to solve a new puzzle, but first get rid of the local Draugrs and look around for a chest with precious items inside. 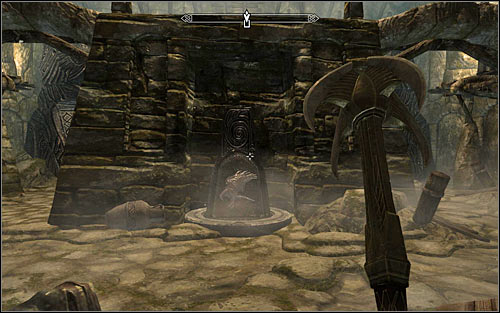 More pillar-turning awaits you now, though this time they will be in different parts of the room. The first pillar is opposite to the entrance (screen above). By default it has an eagle on it, but you have to turn is to a snake. 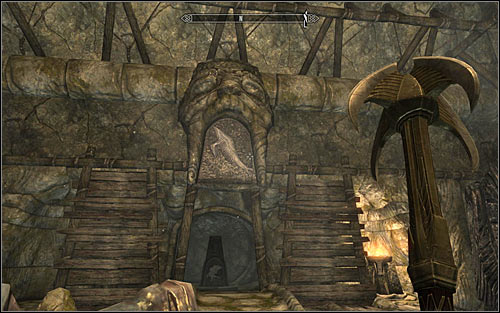 Go up the stairs onto the upper level and temporarily ignore the lever. Head towards the pillar in the northern part of the room (screen above). The sign visible above the bridge shows a fish, so that you have to turn the pillar to the same sign. 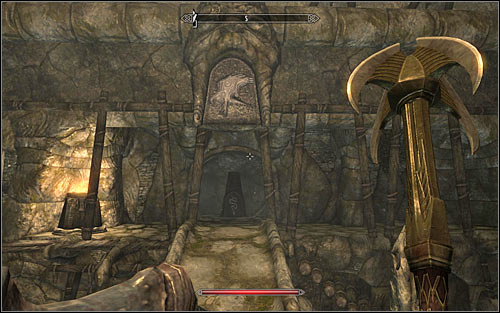 Return to the upper balcony and for a change head south (screen above). The sign visible above the bridge shows an eagle, so you have to turn the pillar to the same one. 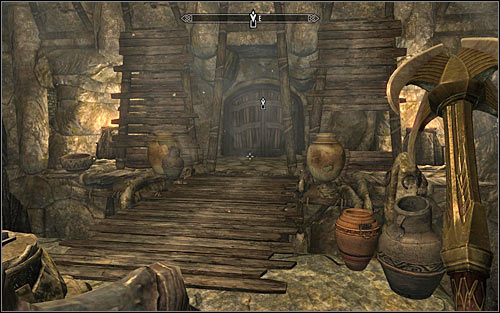 Afterwards return to the lever and interact with it to lower the drawbridge (screen above). Afterwards head east and use the door leading to the second part of the Skuldafn Temple. Head to the nearest room, in which you will have to fight both normal and Restless Draugrs. As for the monsters using magic and bows, try to quickly reduce the distance to them. 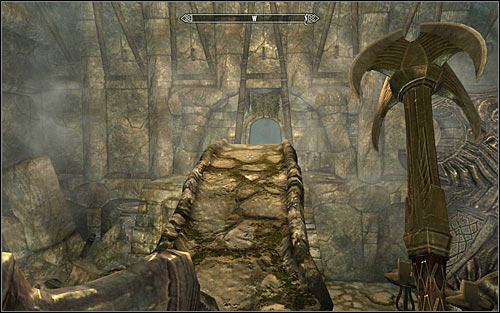 After the battle, use the stairs to reach the upper balconies and afterwards cross the bridge leading west (screen above). Soon you should reach a room with a staircase. You should provoke at least one of the Draugrs on the upper level to come down and stand on the nearby pressure plate once he does, dealing high damage. 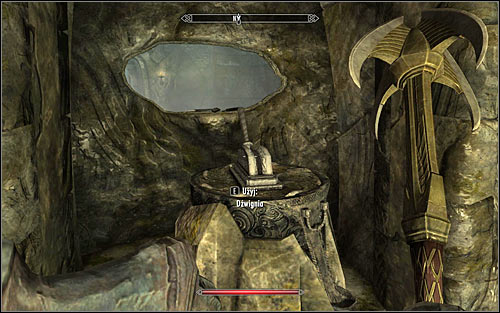 Use the stairs to reach the upper level and enter the southern room in which you will have to eliminate two Draugrs (you can destroy oil lamp here as well, though it's best done from afar). After getting rid of them, look for an interactive lever (screen above) and use the newly unlocked northern passage. I'd suggest being careful on your way to the next location, as touching any of the pressure plates will activate a flame trap. 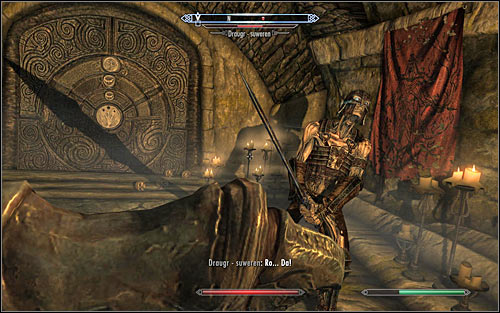 Save your game, as you will have to fight a mini-boss in the form of a Draugr-Overlord (screen above). Be careful while battling him, as he can deal considerable damage. It'd worth to consider attacking from a distance, as close combat is his specialty. Afterwards be sure to check his body, collecting the Diamond Claw required for the next puzzle. 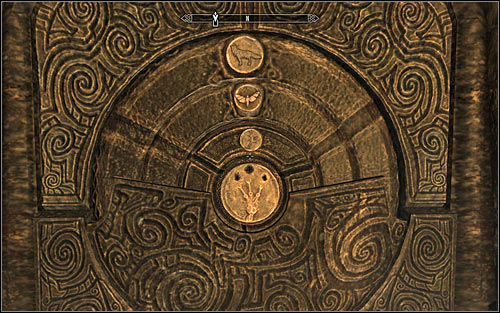 Approach the locked northern gate. You will have to solve a puzzle similar to the one during Bleak Falls Barrow, consisting of arranging three interactive rings. Open the inventory, go to Misc and take a look at the Diamond Claw that you just collected to notice that it shows the proper order of the symbols. The full solution can be seen in the above screen - the upper ring has to show a wolf, the middle an insect and the bottom a dragon. In the end use the Claw itself to unlock the passage. 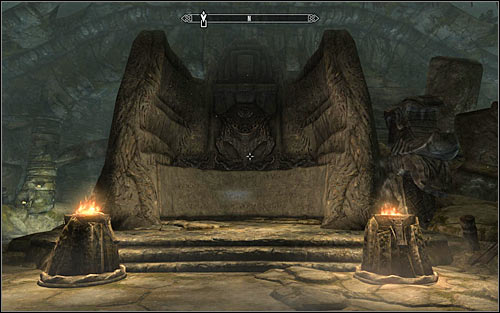 After reaching the next room, look around for a Word Wall (screen above) and approach it to learn the Word of Power - Storm, Storm Call. The Word is connected with the Storm Call Shout and you should unlock it at once, sacrificing one soul from the recently killed dragons (you need to enter the Shouts menu, highlight the new position and press R). Now head towards the north-east part of the room and you should reach the Temple exit, leading to the previously inaccessible roof. 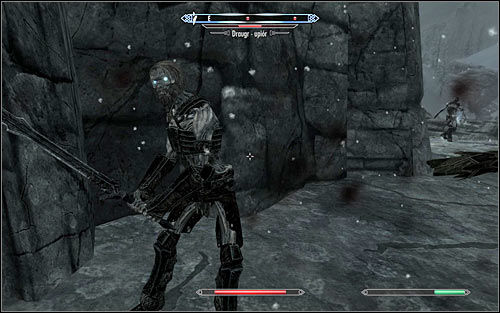 Start eliminating the Draugrs that have appeared on your radar before. You however need to be careful, as they will mostly be Draugrs - Wrights (screen above). Try not to move too far too fast, as you would just draw all of them. You should eliminate the Wrights one at a time, blocking their attacks or dodging them in any possible way. Try to eliminate all the Draugrs on the roof using that method. 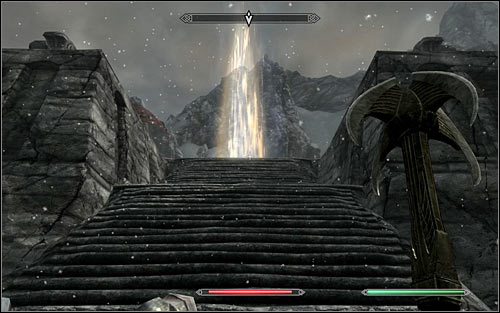 After securing the lower part of the roof, stand opposite to the stairs leading to the upper level (screen above). BE SURE to save you game, as the most important part of the quest is about to begin.