On this page of the guide to The Elder Scrolls V: Skyrim we present the walkthrough for preparations to capture the dragon Odahviing. The preparations are part of the main quest The Fallen. The hero will be required to talk to the Jarl of Whiterun and the Greybeards.

New main objective: Talk to the Jarl of Whiterun 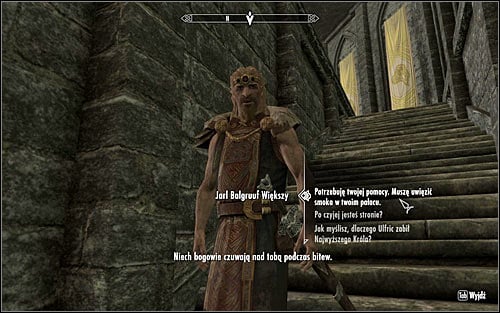 Open the world map and fast travel to Dragonsreach in Whiterun. After reaching the destination, find the Jarl of Whiterun. If the Whiterun is still under control of the Imperial Legion, it will be Jarl Balgruuf (it's also the default state if you haven't yet taken on any civil war quests) and if Whiterun has been taken over by the Stormcloaks, it will be Jarl Vignar. After the conversation begin, you will of course have to ask the Jarl for permission to use his castle to catch the dragon (screen above). 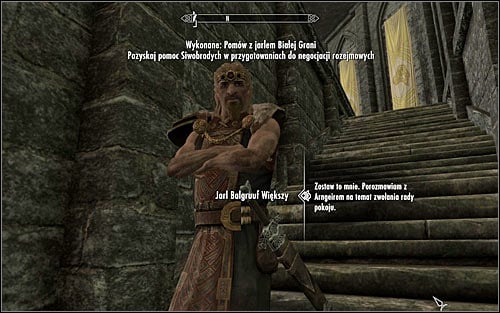 The conversation with the Jarl can end it two ways. The more probable scenario implies Jarl denying you request, as a civil war rages in Skyrim and the other fraction might use that chance to take over Whiterun. The Jarl will change his mind once he learns of Alduin's return, agreeing to the idea of calling a meeting of both fractions at the Greybeards' monastery to negotiate a temporary treaty (screen above). Therefore you will have to start a new quest Season Unending and you will be able to return to catching the dragon only after finishing it.

The second option implies that the Jarl of Whiterun will agree to your idea of using the castle to catch the dragon. You can however hope for such turn of events only if one of sides (Imperial Legion or Stormcloaks) has won the civil war or is close to winning it. The only exception is persuading the Jarl to change his mind by playing a character with highly developed Speech. IF Jarl agrees to put your plan into motion, you won't have to approach Season Unending at all (skip to the Learn Shout to call Odahviing description).

New main objective: Get Greybeards' help in negotiating a truce

Note! This objective will appear in your journal only if you weren't able to convince the Jarl of Whiterun to immediately prepare Whiterun for catching the dragon and instead were asked for help in negotiating a treaty. 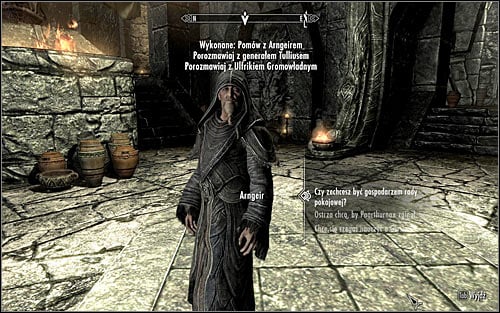 Get out of Dragonsreach, open the world map and head to the High Hrothgar. Enter the monastery and locate Arngeir. During the conversation, you will need to convince the Greybeard to organize a Imperial Legion and Stormcloaks meeting to negotiate the terms of a truce (screen above). Further description can be found in the Season Unending walkthrough.