This page of the guide to TES V: Skyrim contains a walkthrough for the boss fight against the dragon Alduin. The walkthrough refers to the confrontation, which occurs during the main quest Alduin's Bane, soon after unlocking the Dragonrend shout. 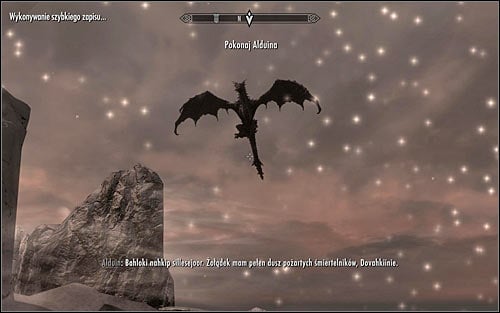 After the cutscene end, you should note that in the meantime, Alduin has reached The Throat of the World (screen above). You need to prepare for the battle with this dragon, as press TAB, choose Magic and set Dragonrend as active (it's also worth to add it to your favourites). The most fact about this battle is that you won't be able to hurt Alduin while he's in air, so don't even waste time and supplies. The key to success is using the Dragonrend Shout, allowing you to temporarily bring Alduin to the ground. 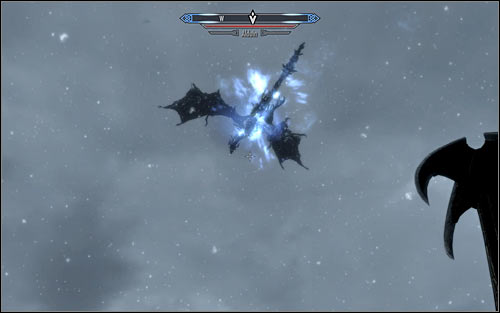 Make sure you have Dragonrend active and wait for the proper moment to use it. It's best to do it when Alduin is flying towards you or when he stops in mid-air for a short while. Hold down Z to use the Shout at its fullest. If you managed to hit Alduin, a blue glow will appear around him (screen above). Otherwise, you will have to wait for the Shout to regenerate and try again. It's of course and additional difficulty, as while it regenerates, you will be defenceless against the dragon's attacks. Therefore you should try to succeed with as many Shouts as possible. 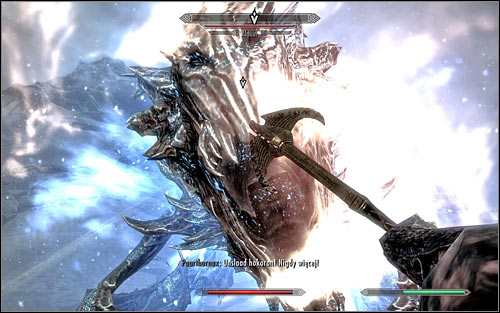 Be ready, as Alduin will soon land nearby. It's then when you have to start attacking him, at best around his head. If your character fight at close range, you of course need to approach the dragon (screen above). Otherwise, keep at a safe distance and use the most powerful weapons and spells. Keep attacking Alduin until the Shout's power wears off and the dragon launches off the ground. 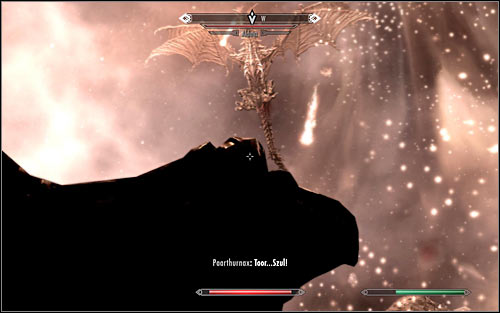 From now on you will have to keep repeating the above actions, so keep pulling Alduin down with the Shout and attacking him once he lands. Of course don't even think that the dragon will be defenceless in the meantime. You will have to deal both with Alduin's fire attacks and with boulders that he throws (screen above). In the second case, you should stand by the rocks or the Word Wall from which you read the Word of Power, therefore slightly reducing the risk of getting hit. Generally, I'd suggest trying to bring Alduin down again as fast as possible. 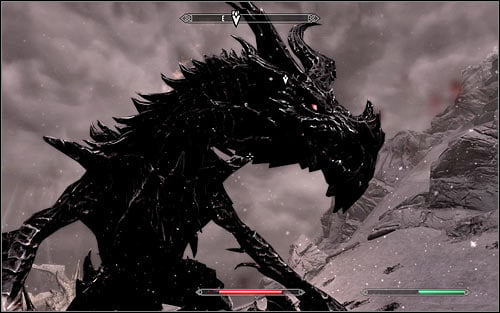 Don't forget to regularly use potions and spells, especially if your character got hurt badly. Keep repeating the above actions until you drain Alduin's health bar (screen above). Unfortunately you won't be able to ultimately eliminate his just yet, as the dragon will escape the battlefield in a hurry. As you have probably guessed, finding his hideout before he can return to full strength will be your next objective.