This page of the guide for The Elder Scrolls V: Skyrim features the walkthrough for the main quest The Throat of the World. You will find here a description of the meeting with the dragon Paarthurnax, after you've reached the beast's location. You do not fight the dragon in this quest. Instead, the protagonist learns, with the dragon's help, a new Word of Power.

New main objective: Learn the Word of Power from Paarthurnax 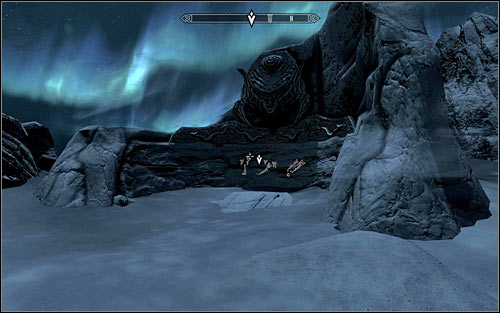 Wait for Paarthurnax to breathe fire and approach the Word Wall on the right (screen above) to learn the Word of Power - Inferno, Fire Breath. The dragon will also share with you the understanding of this word.

New main objective: Use your "Fire Breath" Shout on Paarthurnax 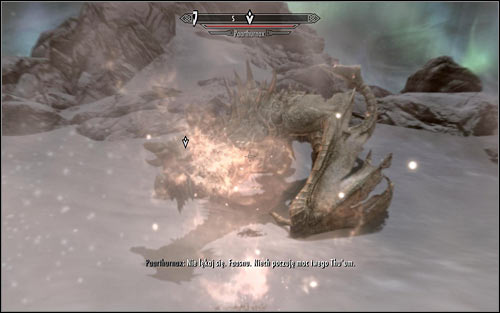 Paarthurnax will now want you to prove him that you're the Dragonborn and use the newly unlocked Shout on him. Press TAB, choose Magic and go to Shouts. Activate or add the Fire Breath Shout to your favourites. Stand in front of Paarthurnax and press Z to demonstrate him your power (screen above). Don't worry about attacking him, he won't get hurt. 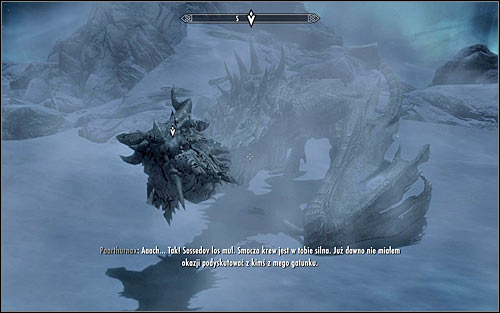 You can now begin the proper conversation with Paarthurnax (screen above). The dragon will tell you that he doesn't know the Shout you're searching for and that is was created by the mortals in the past. What's more, the ancients weren't able to use it to ultimately defeat Alduin, but have unintentionally sent him to the future and that's why the dragon has now returned. Paarthurnax will also reveal that in order to defeat Alduin you will need the Elder Scroll, though finding it will of course require much effort. 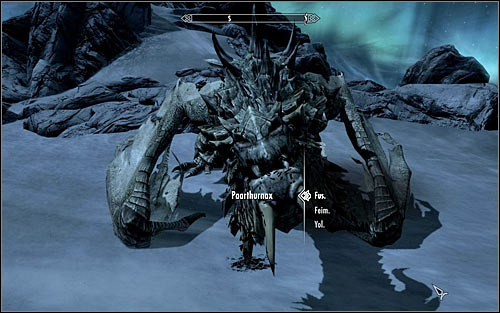 In the end you should ask Paarthurnax about training the mortals and meditation, thanks to which the Greybeards Master will offer you boosting one of your Shouts (screen above). Fus boosts the Unrelenting Force, Feim the Become Ethereal and Yol the Fire Breath. I'd suggest choosing Fus, as Unrelenting Force comes in handy in pretty much every battle. What's interesting, you can return to Paarthurnax at any time and ask for a different blessing, though you can have only one at time.