This page of the guide for TES V: Skyrim contains a walkthrough for the journey to Alduin's Wall as part of the main quest under the same name. During the journey, the hero can be attacked by a dragon and a Hagraven. The objective of the journey is KarthspireÂ and our guide also explains how to solve all the puzzles in that location. 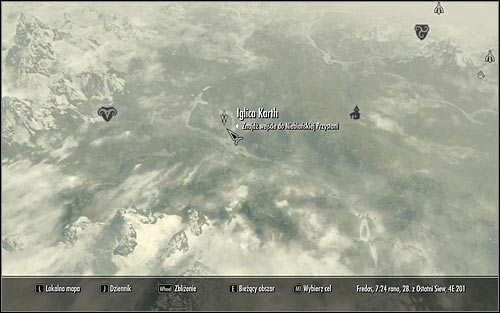 Head out of the Sleeping Giant Inn and open the world map to establish that Karthspire is in the western part of Skyrim (screen above). The easiest way of getting there implies starting at the nearby town of Markarth. If you have already visited that location, you can of course use fast travel to get there. Otherwise you will have to plan your journey there and in such case it would be good to hire a carriage (e.g. the one in Whiterun Stable) to reach Markarth easier. From there you would only have to head straight east. 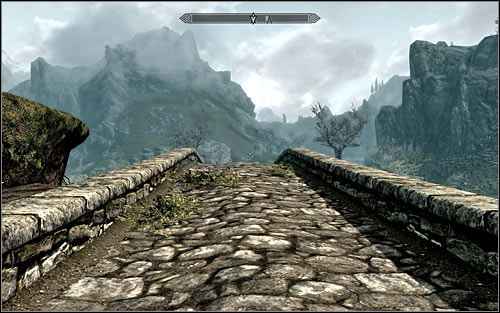 IF you don't want to use the carriage or fast travel, the best solution would be leaving Riverwood and heading west. It's worth adding that you don't necessarily have to go towards the town of Falkret, as suggested by Delphine, as it's far better to stay beside the big water reservoir. Regardless of the chosen method of reaching Karthspire, it would be best to approach it from the southern side, crossing the long bridge found there (screen above). 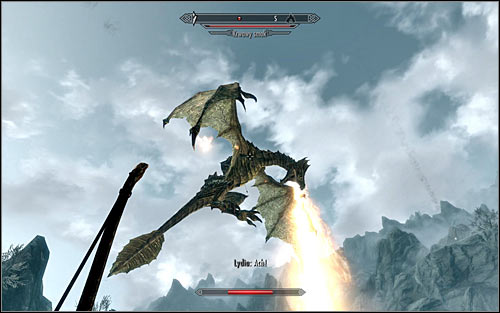 Before heading out, I'd recommend maximally raising your fire resistance, as there's a high chance that you will come across a blood dragon on your way to Karthspire (screen above). The beast is far more resistant that the "ordinary" dragons and at the same time is capable of dealing greater damage, so you need to be very careful with it. I'd recommend checking if Delphine and Esbern are with you, so that you don't have to fight the dragon alone. If you decided to meet with them at the spot, try finding them fast (Esbern will be probably attacking the dragon with spells, making it easier for you to locate him). 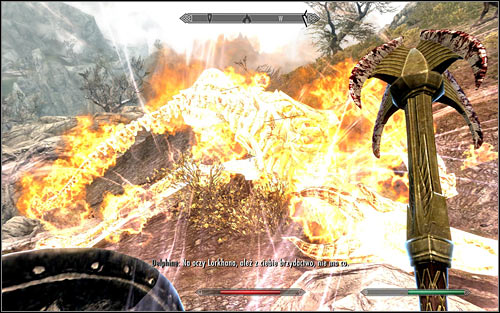 As I have mentioned before, the blood dragon is capable of dealing high fire damage and the additional difficulty here is that don't quite have a place to hide from them. As a result, I'd suggest to mainly draw away his attention and start attacking him only after he focuses on your allies (you will obviously have to wait for him to land, if you're intending to use melee attacks). Eventually you can also try to hide under the bridge or inside the huts at the nearby camp, though by suing the second tactic you can unnecessarily alert the enemies there (fighting them has been described below). Keep fighting until you eliminate the dragon and absorb his soul (screen above) and of course don't forget to examine his body. 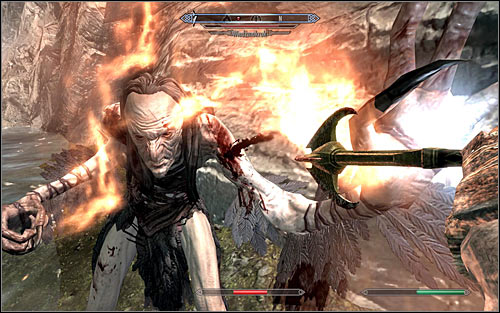 The dragon isn't the only threat that you will have to deal with. Beside the Karthspire entrance, in the Camp - Karthspire located north-east of it, there's a band of Forsworn. The hardest enemy among them is the Hagraven (screen above). Quickly eliminating the witch is a key matter, as she's not only capable of casting powerful offensive spells, but also summon magical creatures. Only after taking care of Hagraven should you move to the Forsworn and Forsworn-Forager. After the battle, I'd recommend checking out the whole camp, as there's a treasure chest to be found here. Also look for a body of a giant lying on the altar and the A Dance in Fire, vol. 2, boosting your Blocking. 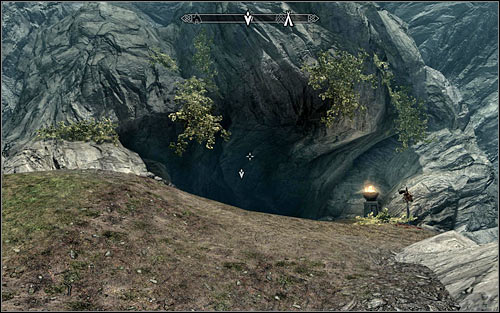 Eventually you should reach Karthspire, finding a rather big cave entrance (screen above). While we're at it, I should mention a certain trick. If you don't want to fight the dragon or the Forsworn, you can try to sneak to the mentioned passage. You would however have to be alone and play a character with equipment and skills raising the chances of staying unnoticed. Yet another option is discovering the spire before approaching this quest, so that you can use fast travel later on. The chose is of course yours. 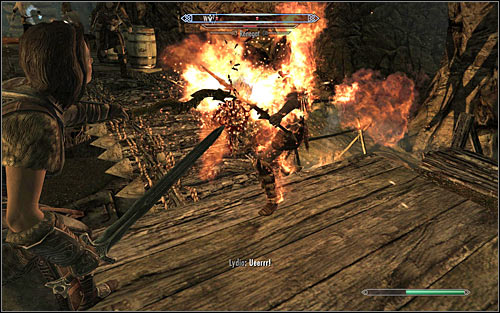 Be careful, as almost immediately after getting inside the cave you will be attacked by a new group Forsworn (screen above). Be especially careful about the Forsworn Briarheart, as he has highly developed magic skills. For obvious reasons that means he should die as fast as possible. After the battle, take a look around the area and afterwards head west, eventually reaching the ruins of Kilkreath. 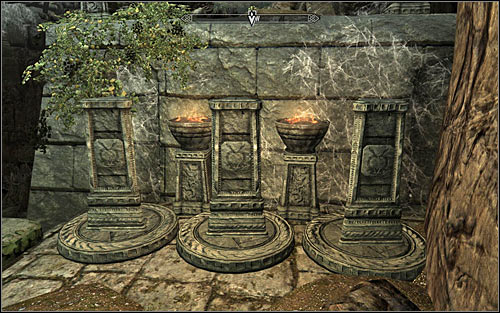 Use the stairs on the right. Stand by the interactive pillars, wait for Esbern to appear and listen to what he has to say about the symbols on the pillars. According to Esbern, the sign on the right pillar (an arrow pointing to the bottom) symbolizes the Dragonborn. Therefore, in order to solve this puzzle, you will need to turn the left and middle pillars so that they show this sign as well. The solution can be seen on the screen above. Arranging the pillars will result in the drawbridge lowering. 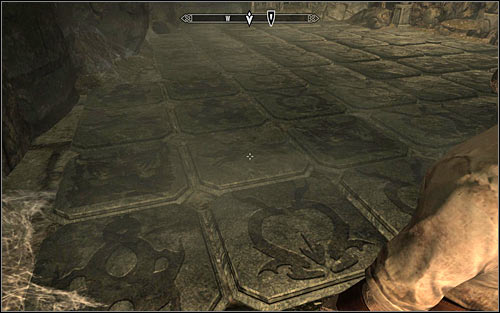 You can continue onwards, eventually reaching a room with pressure plates. As you can easily guess, in order to get through this room safely you will only be able to stand on the plates with the Dragonborn symbol (arrow pointing the bottom). Approach the first plate (screen above). The proper order can be seen below:

1) stand on the first plate 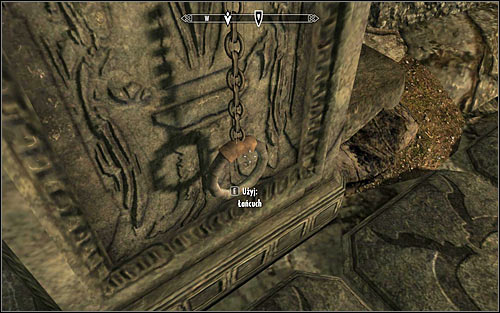 If you have done everything properly, you just need to turn left and interact with the chain hanging there (screen above). Doing so will deactivate all the pressure plate traps, therefore allowing your team to enter. Head north, crossing the stone bridge and eventually reaching Sky Haven Temple. 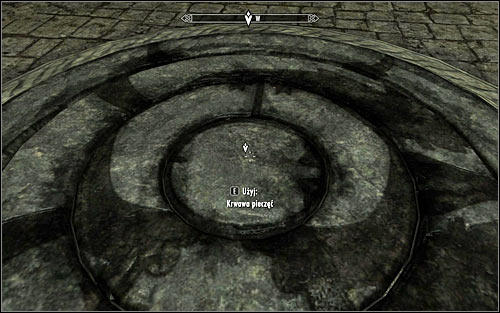 Start off by searching the big chest, as it hides a couple valuable items. Approach the seal on the floor to learn that in order to unlock the passage you will have to sacrifice your own blood. Stand on the seal (screen above) and press E.

Use the newly unlocked passage, eventually reaching a big gate leading to Sky Haven Temple. Take a look around or head to the big wall in the middle of the room at once. Wait for Esbern to appear, as he will be the one to read the information on it (screen above). The most important among them will be the one that in the past, a special Shout has been used to defeat Alduin. Learning it will become your priority. Delphine thinks that you should head seed help at the Greybeards.

Main quest unlocked: The Throat of the World