On this page of the guide for TES V: Skyrim, we have published the first part of the walkthrough for the infiltration of the Thalmor Embassy as part of the main quest Diplomatic Immunity. Our guide shows you how to sneak out of the party to begin exploring the guarded area of the Embassy. 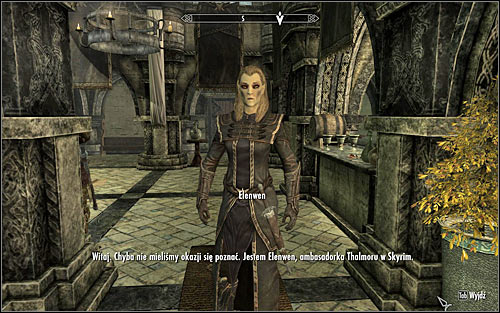 Head towards the embassy. After you get stopped by a Thalmor Soldier, show him the invitation received from Delphine. Afterwards you can head to the main door and enter Thalmor Embassy. Inside, you will be greeted by Elenwen, the organizer (screen above). Whether you give away your real name or not doesn't matter. Elenwen will be distracted by Malborn anyway and will leave you alone. Approach the Elf by the bar to learn that in order to safely reach the back room, you will need to create a distraction to draw the attention of the guests and guards away.

New main objective: Create a distraction and get away from the party 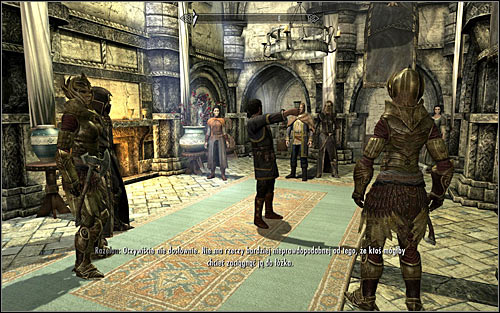 You can reach the desired effect in three basic ways. The first option implies talking with Razelan, who will complain that the waiters don't want to give him any more drinks. Approach Malborn beside the bar or the waitress named Brelan and ask for something to drink, receiving the Colovian Brandy. Give the drink to Razelan, in return asking him to make a scene. Now just wait for the man to drink the brandy and start acting aggressively (screen above). 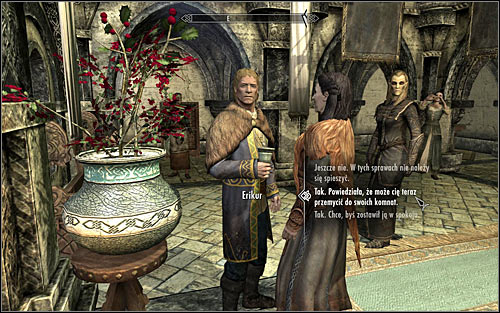 The second option implies initiating a conversation with Erikur. Use all the possible conversation options and afterwards note that Erikur is obviously interested in one of the waitresses. Talk to him again and promise to talk with the waitress on his behalf. Approach Brelan and ask her if she's interested in Erikur, only to receive a negative response. Return to Erikur and lie to him that the waitress wants to meet with him at the back room (screen above). Now just wait for the ending of the whole intrigue.

The last, third option, implies talking with one of the other guests at the party (without counting the guards, Malborn and Elenwen). You will be able to ask each of them to make some commotion, BUT only if you have met him or her before and you are in friendly relations. 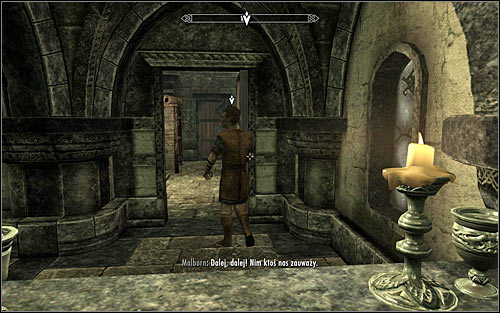 Regardless of how you drawn the guests' attention away, don't wait for a given scene to end but quickly return to the bar and use the door opened by Malborn (screen above).

New main objective: Search for information about the dragons returning 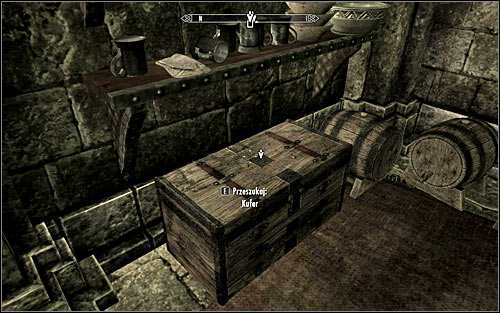 Go through the kitchen with Malborn, without carrying too much about his conversation with Tsavani. After reaching the pantry, approach the marked chest (screen above) and collect all the items that you decided to give to Malborn in Solitude. You should of course equip them all at once. Afterwards open the southern door which Malborn will lock behind you I'd recommend saving your game here, as starting now you will have to avoid or eliminate the guard inside the Embassy. 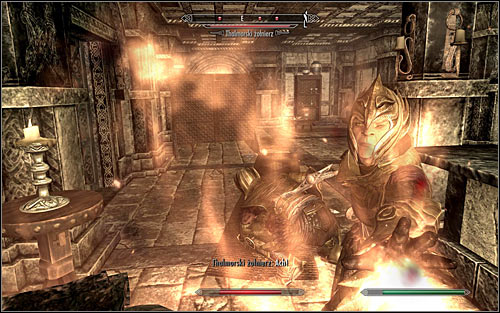 The first group of enemies can be found in the eastern room. If you don't mind fighting, you can of course attack them. You will have to eliminate two Thalmor Soldiers (one of them can cast spells) and a Thalmor Wizard (screen above). I'd recommend eliminating the ones capable of using magic first, as they will be the biggest threat. As you will have to fight is small rooms and corridors, you should also use the Unrelenting Force Shout, which at its maximum level will knock back the enemies standing in front of you, making them easy targets once they hit ground. 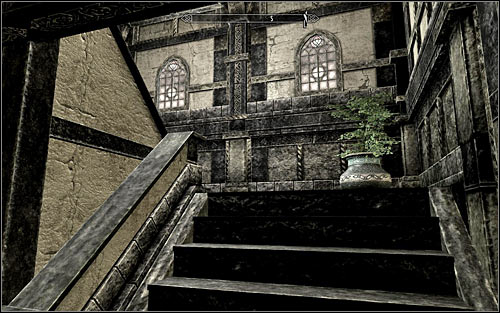 If you intend to sneak, be sure to wait for the enemies in the eastern room to stop talking and split up. Carefully get inside the room and sneak to the southern stairs, leading onto the upper floor (screen above). In order to make this easier, you should consider using items, potions or spells silencing the moves of your character. You can also make yourself harder to recognize by wearing the Thalmor Robes found in the room right of the starting point. After reaching the upper floor you will have to look out for the Thalmor Wizard, though it should be easier. 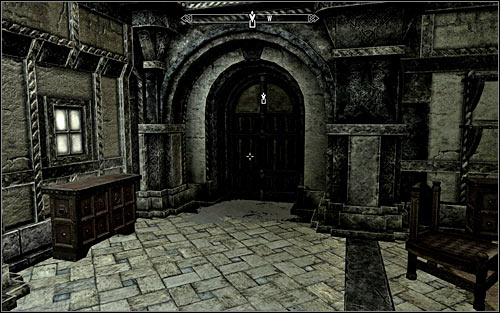 The next objective of this quest is getting out of the main building and reaching the small courtyard. If you have eliminated the enemies, it will be easier to use the passage in the south-east part of the ground floor. If, on the other hand, you were stealthy, you should use the one on the upper floor (screen above). Of course it would be good to take a look around the area before leaving this part of the Embassy. Don't forget to search the enemies' bodies (if they're dead). Additionally keep an eye open for any precious robes, books and potions, found in quite large numbers all around. 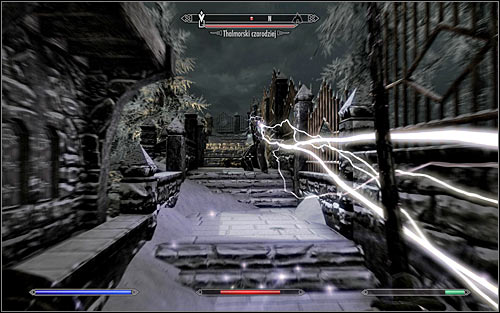 After getting inside the building, you will once again have to decide how you want to behave. If you prefer the aggressive style, you will have to deal with two Thalmor Soldier (with one of them capable of using magic) and Thalmor Wizard (screen above). Just like before, you should eliminate the enemies with magic skills first. You can increase your chances by standing beside the corners of the building and waiting for the enemies to come to you themselves. If you have a follower with you, he will probably attack the enemies in the inaccessible part of the courtyard, though you won't have to worry about his health level. 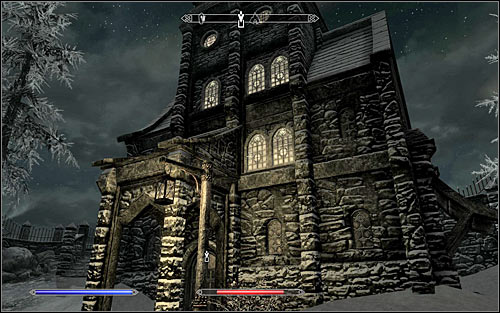 If you want to stay unnoticed after reaching the courtyard, you might have a hard time. The best solution would be using an invisibility potion, as otherwise you will have to be very cautious and keep an eye on the enemies' movements to stay out of their sight. Regardless of the chosen method, you need to reach the entrance to the neighbouring room (screen above), i.e. Thalmor Embassy, Elenwen's Solar. Be sure to save your game after getting inside. 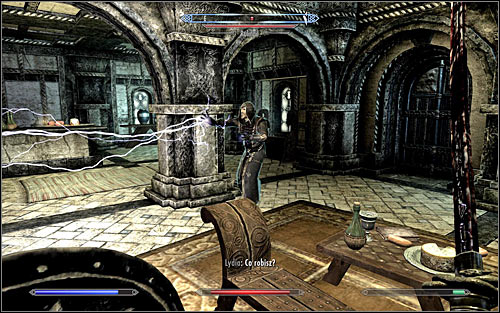 Traditionally, you will have to make a choice. If you want to get rid of the enemies here, ignore the Thalmor Soldier in front of you and head to the left (western) room. There, take care of two stronger enemies, i.e. Gissur and Runildil, who's capable of using magic (screen above). It's a good idea to stand by the western room and use the Unrelenting Force Shout, thanks to which both of the elite enemies will get knocked back and you will have an easier time finishing them off. Afterwards be sure to check their bodies, as they had many valuable items beside them. 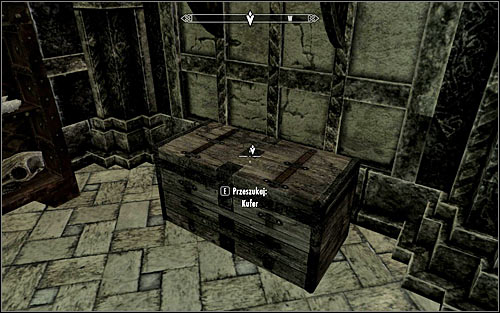 If you prefer to stay silent, you will need to reach the room in the north-west part of the building, avoiding getting detected on your way. The most important therefore will be keeping away from the Thalmor Soldier, as Gissur and Rulindil should be in the western room. Regardless of the chosen tactic, you have to get to the marked chest (screen above) and check its contents. Inside, you will find, inter alia: Interrogation Chamber Key (Rulindil has one as well) and Dragon Investigation: Current Status. Open the inventory, head to Books and read the document. 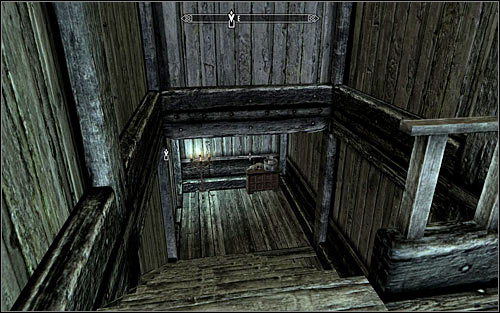 Before leaving this area, you should take a look around it. Inside the western room on the ground floor there's a well-secured cabinet, which will require both good skills and at least one lockpick. On the upper floor, I'd especially recommend checking out the sleeping room inside which you can find the Unusual Gem, among others. Afterwards use one of the two passages leading to Thalmor Embassy, Dungeon, either the northern (screen above) or western one. 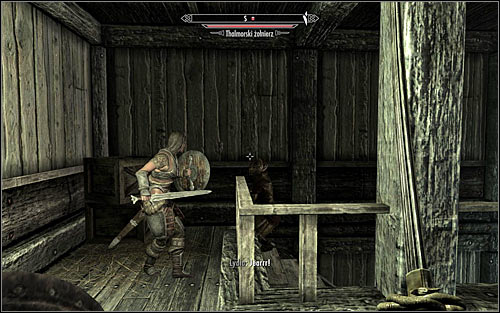 The dungeons are by default guarded by only one Thalmor Soldier and depending on the chosen tactic you can let him see you and eliminate him in direct combat (screen above), or attack him by surprise. The only exception would be the situation in which you passed through the main part of Elenwen's Solar, as in that case Rulindil might appear here as well. Clear the dungeons and use the chance to take a look around the area. If you entangled waitress Brelas in trouble, you will have the chance to free her from the western-most cell. 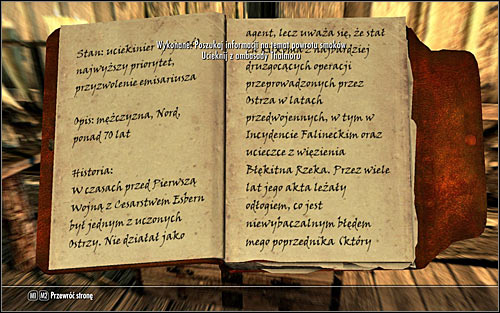 You can obtain information on the dragons' returning in two basic ways. The more obvious option implies checking the chest marked by the game, inside of which you will find the Thalmor Dossier: Esbern. Reading it from the inventory's level (screen above) will let you establish that Thalmor is searching for a member of Blades, a certain Esbern, who is believed to staying in Riften. 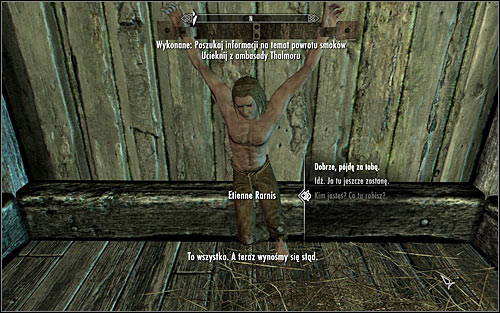 The less obvious option implies talking with Etienn Rarnis, imprisoned in the eastern-most cell (screen above). He would share his very similar information regarding Esbarn and additionally tell you that he has an escape plan. Of course you can still save after collecting the Dossier, though he won't have any new information for you.