On this page of the guide for TES V: Skyrim, we have presented a walkthrough for the fight with the dragon Sahloknir as part of the main quest A Blade in the Dark. The battle with the dragon can be considered a boss fight. 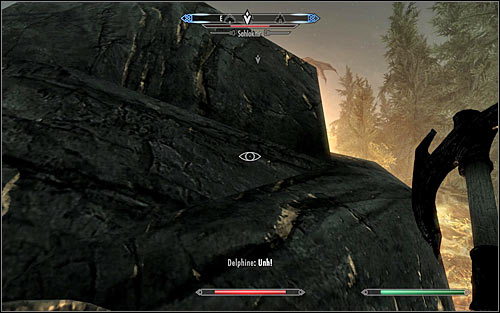 This fight will be a bit more difficult than the one during Dragon Rising, with less allies on your side and a more resistant dragon dealing more damage. As you don't have any big environmental covers here, make sure to check the direction from which the dragon is coming and hide behind boulders (screen above). They won't provide you with full protection, but on the other hand you won't lose too much health as well. Before beginning the fight, you can also use proper spells or equipment to increase your fire resistance. 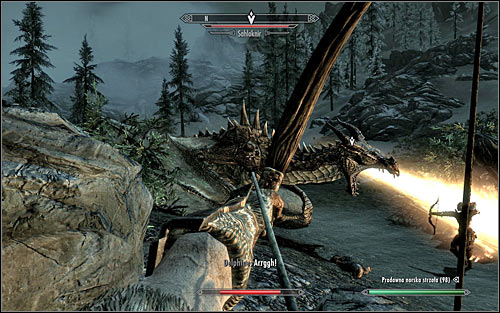 You are of course free to choose how to attack the dragon. If you want to use a ranged weapon, remember to use it when the dragon slows down its flight or lands (screen above), as it will reduce the risk of wasting precious arrows or other projectiles. If you prefer to stick with spells, avoid using those based on fire and always be sure that the dragon is within reach. 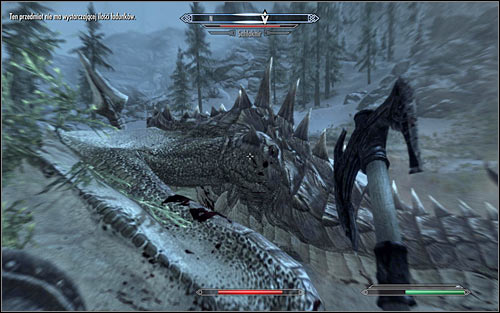 If you wish to fight Sahloknir in direct combat, you most of all have to avoid attacking him from the front, as you will not only risk getting hit by his claws but also serious damage from his fire breath. Instead, let the beast focus on your companions and approach it from the side (screen above) or from behind. 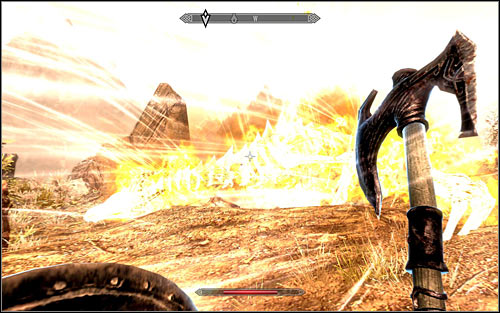 Just like in the previous dragon battle, winning will automatically cause you to absorb the soul of Sahloknir (screen above). Also be sure to approach the dragon's body and collect any valuable items. In the end talk with Delphine, who will be impressed with your achievement. The conversation will lead to establishing that you need to find the ones responsible for reviving the dragons and putting an end to it. Delphine will suggest that the Thalmor might be responsible, but it will of course require further investigation. The woman will tell you to meet her at her hideout to talk over the plan of getting inside the Thalmor Embassy.