On this page of the guide for TES V: Skyrim there we present the first part of the walkthrough for the journey to Ustengrav temple as part of the main quest The Horn of Jurgen Windcaller. With our guide, you will learn where the ruins are and how to make your way through the initial room and deal with the Draugrs. 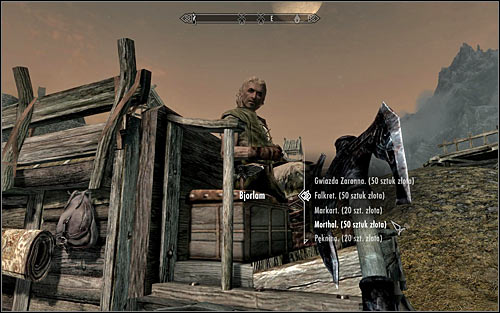 Open the world map, thanks to which you will establish that the temple of Ustengrav is found in the northern part of Skyrim, between Morthal and Dawnstar. If you have already visited one of those areas, you of can use the fast travel option. Otherwise, you will have to get there on your own. If you don't mind spending some gold, you can also consider going by a carriage. You can find one of such services in Whiterun Stables (screen above). Bjorlam can take you to Morthal or Dawnstar for 50 gold. 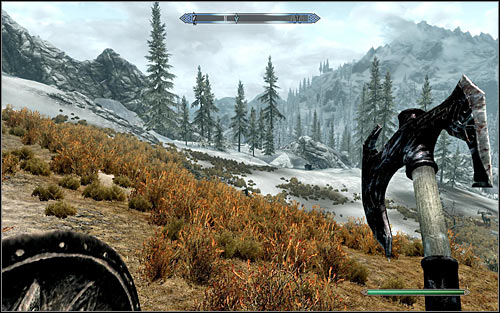 If you don't intend to pay for the trip and additionally haven't visited any locations nearby Ustengrav, you're in for a long a hard trip. The choice you can make here implies either avoiding the mountain range dividing the central part of the map from the northern areas or go through them. If you decide on the latter option, I'd suggest going through the snowy valley directly north of Whiterun (screen above). I'd recommend this solution as on your way you won't be attacked by any monsters and you won't have to climb. 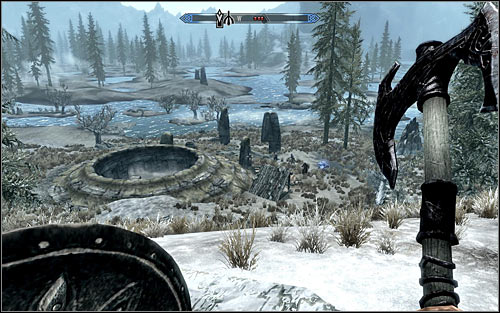 After reaching the northern part of the map, that is after getting nearby Morthal or Dawnstar, you will have an easier time getting to Ustengrav, as you will mainly travel through lowland and encounter weak enemies on your way. Your destination is the big hole in the ground beside the swamps (screen above). 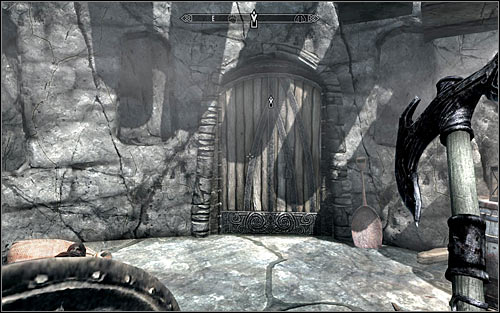 Be careful, as the temple entrance is likely to be guarded by Bandits and a Novice Warlock. I'd especially recommend focusing on the mage, as he can not only use offensive spells, but also raise his fallen allies. Therefore it's important not to let him use spells, getting rid of him quickly. After the fight you should examine the necromancer's body to find, inter alia, the Spell Tome: Flames. Afterwards jump down the hole and enter the temple of Ustengrav (screen above). 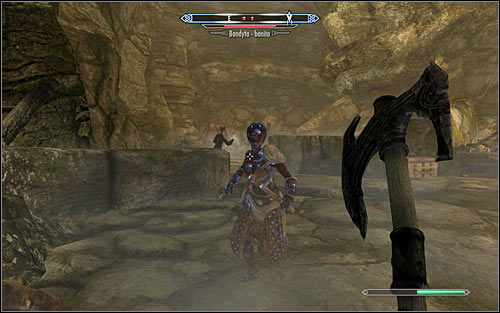 Head east. You will encounter the first group of enemies right after entering the bigger cave (screen above) and with some luck you should be able to attack them by surprise. After the proper battle begins, I'd recommend eliminating the Apprentice Conjurer and Apprentice Necromancer in the first place, stopping them from casting too much spells. Leave the Bandit Outlaw and the ordinary Bandit for the end. Afterwards you should of course examine the enemies' bodies and take a look inside the chest. Once you're done, head towards the northern exit. 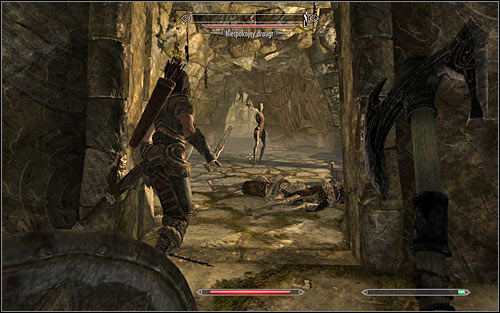 On your way you will come across dead bodies and of course you should examine them. Soon you will also learn the cause of their premature departure, as you will have to eliminate a group of Draugrs. Try to eliminate them fast, as soon a Restless Draugr will join the fight (screen above). Try to increase your cold resistance before the fight and during the battle itself don't let the Draugr use spells too often. I'd also recommend taking a look around the nearby crypts, checking out big and small urns. You should find the Mystery of Talara part II, boosting your Restoration skill. 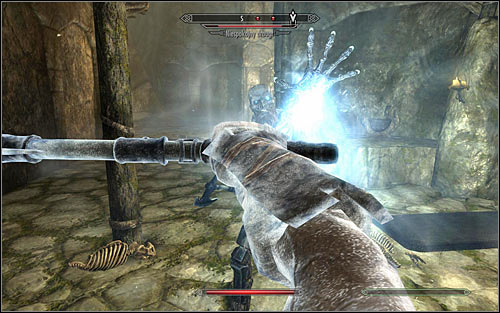 After exploring the area, head east and afterwards turn south. Be careful, as soon you will come across another group of Draugrs, accompanied by a Restless Draugr (screen above). Act just like in the previous battle, heal in case you're wounded and also depend on your follower. Afterwards head maximally south and take the eastern passage. Use the stairs thanks to which you will reach a bridge located above the room in which you fought with the monsters. Cross the bridge and you will reach a gate leading to Ustengrav Depths. 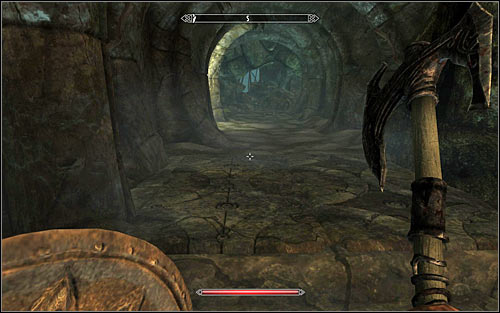 Follow the only possible path. After reaching a large cave, quickly deal with a single Draugr. If you want, you can try to attack the monsters on the lower level from afar, but it probably won't be necessary. Sooner or later you will have to head south. However look out for the trap in the nearby corridor. You need to walk along the pressure plates on the left (screen above), thanks to which you won't cause flames to appear. If you make a mistake, get off the wrong plate as fast as possible. After getting past the trap turn east, reaching a two-level room. 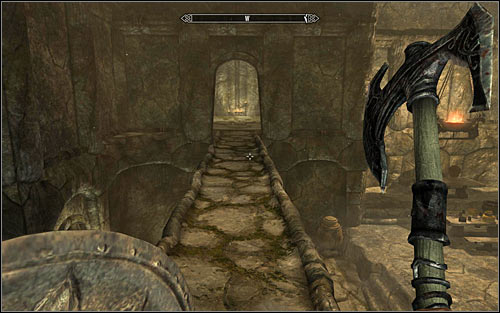 There are a few Draugrs in this room and you can attack them from above or jump down and fight them directly. Be especially careful when fighting the Restless Draugr, who will be at first patrolling the bridge south of here. After exploring the area enough, head south. Find the stairs leading onto the upper level, thanks to which you will reach the southern bridge (screen above). Afterwards head west, continue going through the tomb. 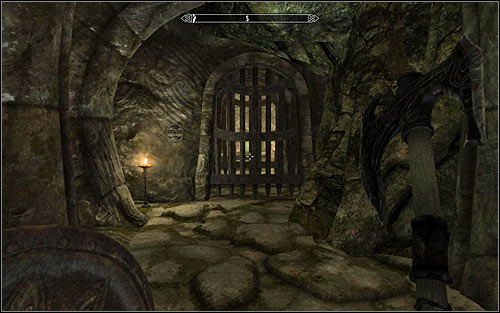 After reaching the new room, you will be attacked by ordinary Draugrs. It's worth to notice that you will be able to attack them before they get up from their graves. South of here there's a small room (screen above), though reaching it is purely optional. If you decide to go there, you need to locate and activate two switches. The first is right beside the grate and the second west from here. Inside the small room you will find, inter alia, a magical catalyst used for enchanting. After exploring the area, choose the small passage leading west. 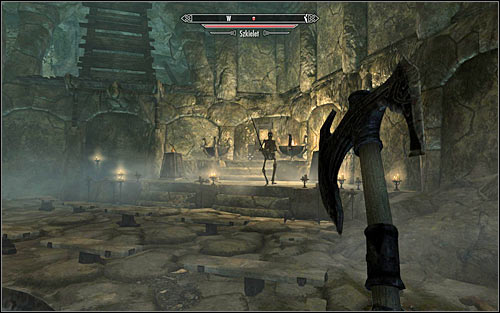 Soon enough you should once again reach the large cave. Carefully go down the stairs onto the lowest level and fight with the Skeletons found there (screen above). Eliminating them should be go easily, though you should look out for the archers and either attack them from afar, depending on your follower's skills, or getting beside them as fast as possible. After the battle you will have to decide if you want to reach the Horn as fast as possible, or spend some time on exploring the area. I'd recommend the latter option, for obvious reasons. 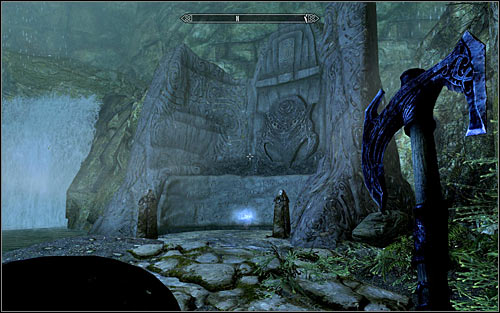 If you want to explore the eastern balcony on which the Skeletons were, you will have to look out for the pressure plates beside the stairs, going between them. You should also note that access to the northern balcony is limited, but you can overcome that by returning to the stairs which you used to reach the cave and afterwards jumping onto the small ledges beside the pillars. Curiously, reaching the two last pillars won't be possible with just the basic jump and will require you to use the Whirlwind Sprint Shout. The most important thing however is to use the stairs in the northern part of the cave, leading onto the lowest level. After getting there, look for a word wall (screen above) and approach it to learn a the Word of Power - Fade, Become Ethereal. Note that in order to unblock the Become Ethereal Shout, you will have to find and defeat a Dragon on your own and afterwards absorb its soul. 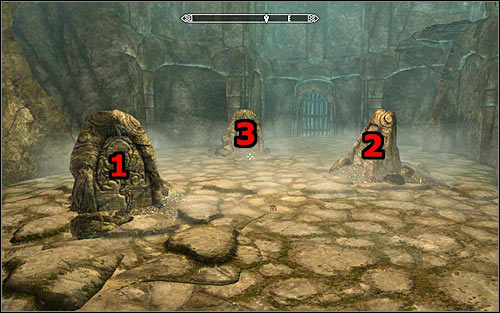 You can now return upstairs and go cross the big bridge leading east. After getting there, fight off a single Skeleton and prepare to solve a uncomplicated riddle (screen above). Stand beside plate 1 and activate it. Afterwards quickly run to plates 2 and 3. 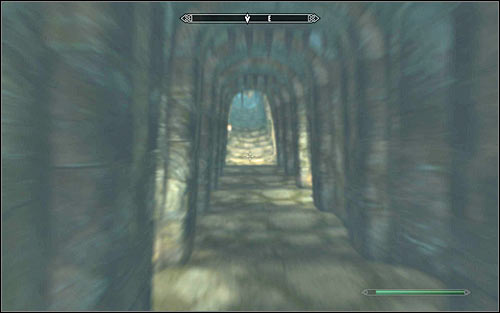 That's not all, as you have to use the Whirlwind Sprint Shout, aiming at the newly unlocked passage (screen above). The key to success is reflex, as you will have to use the Whirlwind before the grate falls down again. If you won't make it and become stuck, pull the chain and return to the plates for another try. Head north-east (you won't have to worry about your party member, as the grate will stay raised after you pass it yourself). 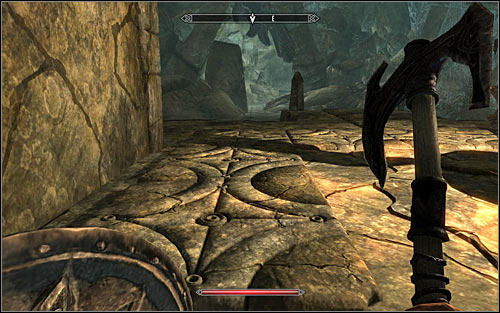 After reaching the new location, you will once again have to avoid flame traps. Stand on the left (screen above) and head forward. Go along the slightly curved path, turn right and afterwards left. After getting off the path head forward, get off the interactive plates and stand on the rocks. Slowly move east without getting off the rocks, as it might activate the flame traps. 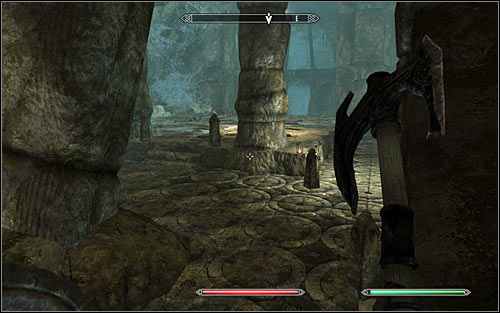 Eventually you should reach a new big room with Frostbite Spiders visible in the distance. Turn towards the safe platform north-east from here (screen above) and use the Whirlwind Sprint Shout thanks to which you will safely get across the last group of pressure plates. You can start fighting the spider. Try to eliminate the two lesser monsters as fast as possible, as a bigger spider will soon appear. The beast can deal much larger damage, so if your character attack from a distance, consider returning onto the rock ledge or keep running throughout the whole arena, looking out not to fall down or touch a pressure plate. 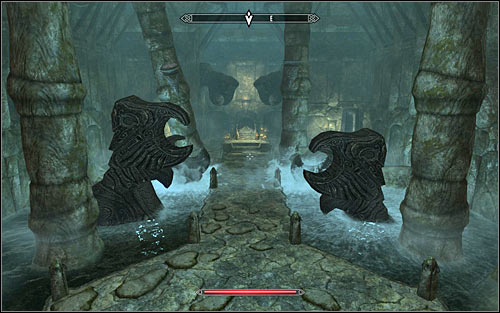 You can head north-east, using weapons or magic to destroy the spider-webs blocking the passages. Open the wooden door and after reaching a locked gate pull the chain thanks to which you should reach the room with the Horn (screen above). Head towards the altar to notice that the Horn has been stolen by someone else.