On this page of the guide for The Elder Scrolls V: Skyrim, we have presented an important part of the walkthrough for the main quest Dragon Rising. This part of the guide focuses on the appearance of a hostile flying beast. We will tell you how to defeat the dragon attacking Whiterun. Confrontation with the monster can be seen as the first boss fight in the game. 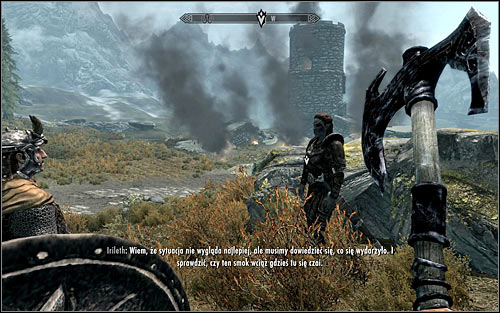 The Western Watchtower, by which the Dragon was spotted, is of course found outside Whiterun and you can head there in two basic ways, either along or by sticking to Irileth. The guardian will first get out of Dragonsreach and after reaching the exit gate deliver a speech before the guards. After leaving Whiterun, you need to head west and at best stick to the main path at all times. Eventually you should reach the destination (screen above) and, if needed, wait for Irileth and her guards to get here as well. 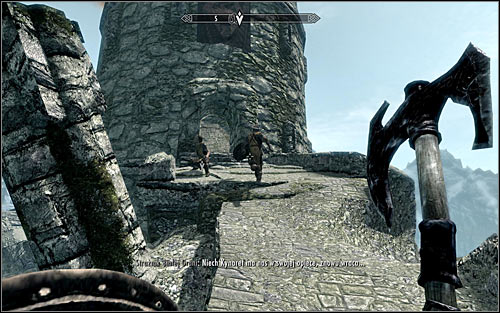 Approach the entrance to the partially destroyed tower (screen above). Listen to a short conversation and eventually the Dragon Mirmulnir will appear in the distance and you will have to fight him. 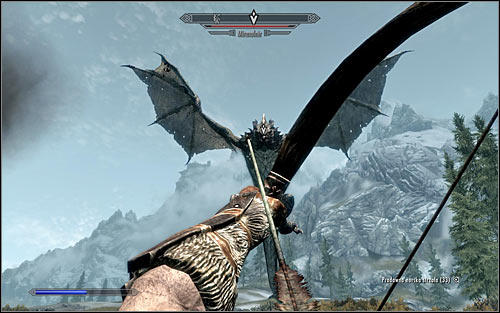 The tactic of fighting the Dragon should of course depend on the specialization of you character. Mirmulnir can be of course attacked from distance. If you intend to use a ranged weapon (screen above), wait for the beast to slow its flight or lands somewhere and attack it afterwards. If you, on the other hand, intend to use magic, try to avoid using spells based of the element of fire (I'd recommend lightning) and make sure that the Dragon is in range when you cast them. Be sure to avoid the Dragon's fire attack, either by hiding inside the tower or behind a good cover. I wouldn't recommend climbing the top of the tower, as it would only cause the Dragon to unnecessarily focus on you. It's far better for it to attack the others. 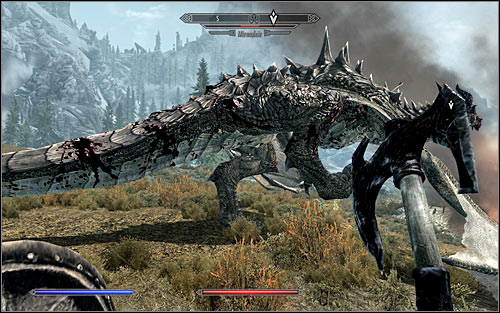 If you want to get rid of the Dragon in direct combat, you need to be very careful. Of course wait for the beast to land each time. Don't attack it frontally, as you will risk being hit by its fire breath or claw attacks. It's much better to approach Mirmulnir from the side (screen above) or back. Of course keep an eye on your health and stamina bars, regenerating them after they reach critical levels. 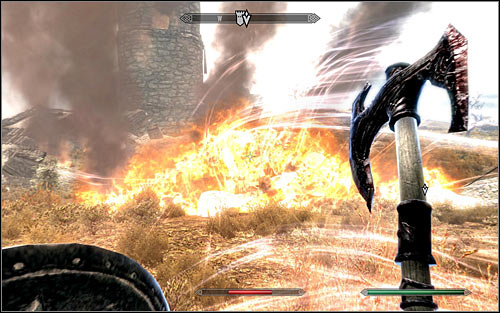 Regardless of the chosen tactic, you need to keep fighting until the beast falls. Note that your hero has absorbed Mirmulnir's power and wisdom in a quite cool fashion (screen above). Follow the instruction and approach it body to gain, inter alia, Dragon Bones and Dragon Scales. 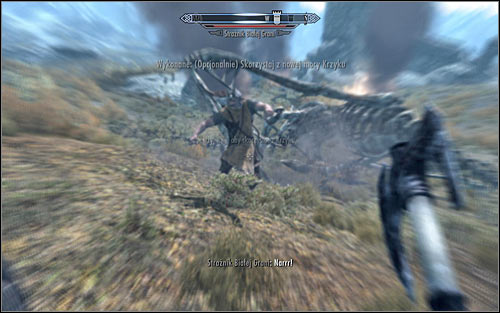 Soon enough a Whiterun Guard should approach you and tell that according to him you're the Dragonborn, capable of using the power of Shout. In this particular case it's the Shout that you learned during the previous mission (Bleak Falls Barrow) by approaching the Word of Power plate. You couldn't use it earlier, as it required absorbing a dragon soul. Press TAB and open the magic menu. Head to Shouts, mark Unrelenting Force and set it as active (you can also add it to your favourites and afterwards choose it at any time by pressing C). After activating the shout, use it by pressing Z (screen above). Luckily you don't have to worry about accidentally killing anyone, as they will only be pushed away. I'd recommend using this and other Shouts that you will learn later on in the game often. The Unrelenting Force in its current from regenerates only 15 second, so you will be able to use it more than once in most battles.

You can now return to Dragonsreach. Enter the Jarl's castle and head to the throne room (screen above). Hear out the conversation between Balgruuf, Avenicci and Hrongar. After reporting on the victory over the Dragon, you will learn of the Greybeards who are apparently calling in the main hero to teach him how to use the Shouts. In order to meet with them, you will need to reach the High Hrothgar, located on top of a large mountain. Before your departure, the Jarl will also inform you that you are now a Thane, give you a thane weapon (its kind and properties depend on your level and gameplay style) and appoint Lydia as your housecarl. From now on, she will be your follower/bodyguard.

Main quest unlocked: The Way of the Voice