When you decide to sleep in The Bloated Front in the Waterfront for the first time, you'll wake up to find that the ship set sail and is already far away from the port! Leave the room and talk to Lynch. Kill him and take both key and a note. Open the Storage Room and talk to the inn's bouncer - the ship's been hijacked! 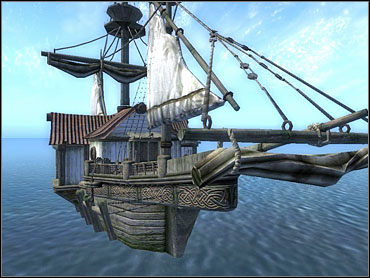 Enter the upper level and kill another gang member. Take the next key from his body and use it to reach the bridge. Kill yet another bandit in there and take yet another key. Enter Ormil's cabin to meet the gang's leader. If you talk to her the right way ("I took the key from Wrath", "I'm here to join your gang", "Three months ago", "To find the Golden Galleon", "In Bravil"), she'll surrender without a fight and give you her sword. Escort her to a room-cell at the lowest level of the ship and talk to Ormil. Go to sleep again - you'll wake up in Waterfront again. Plus, you'll get some money for saving the inn.

Order of the Virtuous Blood

One time when walking around Temple District, you'll be approached by Ralsa Norvalo, who'll tell you to go to her husband in Seridur's House. Go there and talk to Seridur, who'll lead you to his basement - the headquarters for so-called Order of the Virtuous Blood. The knights will ask you to get rid of a vampire named Roland Jenseric.

Break into Jenseric's house. There's a note on the table (Love Letter from Relfina). A new map marker will be added, indicating Roland's hideout. Talk to him and it will turn out that he can't really be a vampire - moreover, he tells you that Seridur himself is the beast here! He'll tell you to go to The First Edition in Market District.

Talk to Phintias. You'll find out that Seridur often travels to Memorial Cave. That's your next stop. This time it will be a common dungeon, filled with vampires and undead. In the end, you'll meet Seridur. Kill him and take his key. Go back to Roland.

Return to Temple District and pay a visit to Seridur's House again. Roland has taken the traitor's place as the leader of vampire hunters. As your reward, you'll get a Ring of Sunfire and a title of the Order's honorary member.

The proprietor of Jensine's "Good as New" will ask you to solve a mystery of suspiciously low prices set by the owner of Capious Coinpurse. Head there and talk to Thoronir. He won't tell you anything of interest. Wait until 11 PM and stand near the entrance of his shop. When he leaves it, follow him. He'll go to the tavern to have something to eat and then go to a garden near The Market Sewers. You'll see him meet a mysterious man named Agarmir. Follow that one when they're done. 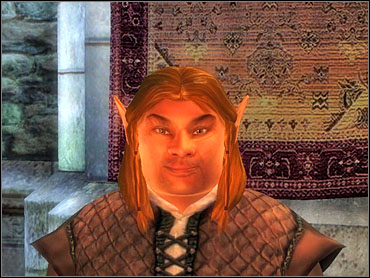 Reach Agarmir's House. Wait until about 6 PM and enter. There will be evidence in the Cellary: a book and a shovel. Take the book and show it to Thoronir. He'll agree to help you in exposing Agarmir's crimes. Go towards the map marker, to Trentius Family Mausoleum.

It turns out Agarmir sensed that you're after him and prepared for a fight. Kill both him and his companion. Look around and take their shovel. There's a key by Agarmir's body that'll allow you to leave here.

Go back and talk to both Thoronir and Jensine. Another job well done.

Quest From: Lurong gro-Glurzog or Ruslan;

Find either an Orc named Lurong or a Redguard named Ruslan to hear a story about a corrupted guard captain here in Imperial City. Go to Jensine, the proprietor of Jensine's "Good as New". Raise her disposition to get the captain's name: Audens Avidius.

Only another city guard captain can do something about Avidius' crimes. Ask any of the guards about it, and you'll be told to talk to Servantius Quintilius, wandering around Arboretum during daytime. He will reject to risk his career and suggest you to try with Itius Hayn, patrolling the Elven Gardens.

Raise his disposition and he'll tell you that he will personally see Avidius arrested, but you have to find two witnesses willing to confess against him. Jensine will reject it, but Lurong and Ruslan won't. Tell them to do it and matters will solve themselves from now on.

HINT: Corrupted Avidius will escape the prison after a few days and try to take his revenge on you. You'll be randomly attacked by him. Once he's dead, it's all over.

In order to get this quest, you have to go to one of the Ayleid ruins listed below and find an object called Ayleid Statue. When you obtain it, go to any shop and sell it. Wait a few hours, and a messenger from Umbacano will approach you and invite you to his master's mansion in Talos Plaza.

The Butler will escort you to his master. Umbacano wants you to find 9 other statues, just like the one you retrieved before. A lot of work? Indeed, it's the second longest quest in the game, beaten only by "Seeking Your Roots".

If particular ruin consists of more than one level, the statue is most likely on the lowest one. The difficulty in this quest is really only due to lack of map markers. You'll have to find the statues entirely yourself. It takes considerable time, but isn't too complicated. Just a lot of scavenging.

When you bring the second statue to Umbacano, he'll support you with a few names of ruins that you should look in (doesn't make any difference as you already have a full list a few lines above). When you deliver the third one, he'll have another quest for you - "Nothing You Can Possess".

Nothing You Can Possess

When you sell three statues to Umbacano, he will have another assignment for you. Now you have to find an antique, carved panel. The first step is to find out the contemporary name of the Ayleid city once known as The High Fane. When you leave Umbacano's mansion, you'll be approached by Claude Maric, who turns out to be the elf's bounty hunter just like you. He'll invite you to Tiber Septim Hotel for a drink. Follow him and ask about The High Fane. He'll tell you to read the book called "Cleansing of the Fane". You can find it in The First Edition in Market District. You can just as well raise Maric's disposition and he'll tell you that the place you're looking for is Malada (11s13).

The artifact is on the second level. In order to get to it, you'll need Umbacano's "key" that he gave you. When you take the panel, watch out for the falling wall. Leave this place, only to find out that Claude has prepared a surprise for you.

He wants you to give him the panel so he can have the reward. You can choose: obey and loose a considerable amount of money, fight three mercenaries, or just run. Either way go back to Umbacano. He has a final assignment for you.

Once you finish the "Nothing You Can Possess" quest, Umbacano will have another task for you. This time it's about retrieving an Ayleid crown from another collector, Herminia Cinna. You'll get 1000 Gold to "cover your expenses".

There are two solutions to this. The first one is just to steal the crown from her house - it's in Ayleid Cask in her bedroom. The other way is to talk to Herminia personally and hear that Umbacano shouldn't really get this crown as it might be dangerous in his hands. She'll advise you to retrieve another, less powerful crown from Lindai (3s9) - Umbacano can't really tell the difference between each other. You'll find it in Ayleid Cask on the second level of Lindai.

Either way you chose (you might just as well get both crowns and now decide which one to give your 'boss') go back to Umbacano and give him the crown. He'll ask you to meet him near the Nenalata entrance in 3 days. Do so - and don't be surprised to meet your buddy Claude in there. This time you're both on one side.

There's a three-level dungeon to cross. You have to escort Umbacano through it. On the third level there will be an entrance to the throne room. The elf will open it before you. You'll witness a scene: if you gave him the real crown, he'll now transform into an evil Lich, and if you switched it for the other one he'll die. In both cases you'll get to fight a large group of undead. Well, that's it for Umbacano the Collector.

HINT: It's pretty obvious that when you decide to take this quest you can't complete "The Collector" any more. If you don't want to loose the money for doing it, wait until you get all the statues and sell them to Umbacano.

Origin of the Gray Prince

When you talk to the arena Grand Champion, Agronak gro-Malog, he'll ask you to solve the mystery of his legacy. You'll get a key and a map marker indicating Crowhaven.

HINT: Another good thing about this quest is that once you've beaten it, you don't have to fight Agronak for a Grand Champion title, as he will simply give in.