The procedure is similar as before. You will be contacted by a messenger, who will tell you to go to Malintus Ancrus in Chorrol. After listening to what Gray Fox has to say, go to Bravil and talk to one of the beggars. Head to the castle.

Sneak into Fathis Aren's room. You won't find anything particular in there, but there's a Movable Pillar on the northern wall (the right screen above). There are two levels of dungeons before you. In the first one, you'll have to dive between two corridors, as there's no key to the door that's blocking your way.

After getting on the ground level again, you can either kill Fathis and take the key from his body (no penalty from the Guild) or steal it from him. If you feel comfortable with Security, ignore him completely and just sneak into his laboratory on the upper level. In there, open the chest with the arrowhead you're looking for. Take the tower key and use it to leave this place.

If you fenced at least 900 Gold, once again wait in the Imperial City for the messenger to arrive. This time you have to go to Gandredhel's house in Cheydinhal.

Your goal is to steal boots of a legendary thief, who was buried with them 300 years ago. From the beggars in the Imperial City you'll know that the thief's ancestor lives in Talos Plaza District. Break into Jakben Imbel's House. You won't find anything of interest here - you need to find Jakben personally. 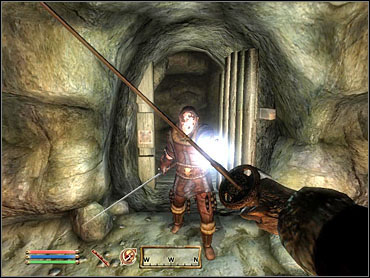 At night, he's walking around the city, and during the day he's in his house. When you talk to him, he'll totally freak out and give you the key to his basement. You can go in there or just kill him where he stands - he's a vampire. In fact, he IS the original Springheel Jak. The boots you are looking for are actually on him, so there's no way to get them but to finish him off. If you decide to enter the catacombs, though, there will be some more vampires to kill, and also an interesting book named Jak's Journal.

When you get the book, Gray Fox will tell you that there is only one more task before you.

Again, the procedure is very similar to all the previous quests from Gray Fox. You must have fenced at least 1000 Gold to get this one. Amusei will approach you and tell you that Gray Fox is waiting in Orthelos' House in Elven Gardens. He'll tell you that your last objective to steal the Elder Scroll from the palace library! 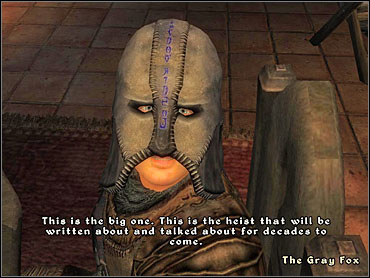 Fox doesn't hide his excitement. You can tell, even through the cowl.

Go to the Palace in the central part of the Imperial City. Follow the map marker, breaking in to the cellar. You'll see a huge hourglass called the Glass of Time. Touch it and go back outside. Head to Imperial City Aboretum and use the sewer entrance pointed on your map. Now to cross three levels of sewers. You'll encounter some doors that require turning the handles nearby. Finally, you'll reach The Old Way.

The Old Way is an irritating dungeon, consisting of a few separate parts. It's fairly easy to get lost in here - just try to uncover the whole maps, and you'll find your way eventually. You'll get to The Lost Catacombs. In the end of the level, you'll have to wear Jak's boots (if you haven't worn them all the time, and you should have) to jump on the upper level of the room (left screenshot). Use one of the buttons there and run through the open door to the Hall of Epochs.

Enter the huge room and you'll get a journal entry that you probably should use the Arrow of Extrication somewhere around here. Go through the door in the southern part of the room and use the button here. Continue on due south. Go to the next section of Hall of Epochs. Look around over there, you'll find another button. Use it and go back to the huge room with a statue. The stone blocks have disappeared and you're free to use the arrow in the right spot.

Practice a little bit using ordinary arrows. Your crosshair should be somewhere around the statue's hands, where they are holding the sword. When you hit the right spot, you hear a recognizable sound. When you feel confident already, use the Arrow of Extrication. If you miss, you'll have to go for the arrow, pick it up, return to the shooting point, and try again.

Go through the door that appeared before you.

You're in the palace already. Sneak into Elder Scrolls Library. When you're on the level with blind monks sitting around, use the lever (left screenshot above, it's hard to see it without a torch). Sit on the chair and wait for the monks to bring the scroll to you. Take it, stand up and sneak up the stairs. Picklock the door and sneak past the guard to Moth Priests' Quarters, then to Battlemage's Quarters. You're in Chancellor Ocato's private room! Approach the fireplace and jump down. You've done it!

HINT: Jumping down the fireplace takes a LOT of damage, unless you're wearing Boots of Springheel Jak. They are destroyed in the process, though. Decide whether you prefer to keep the boots and risk death or loose them once and for all. 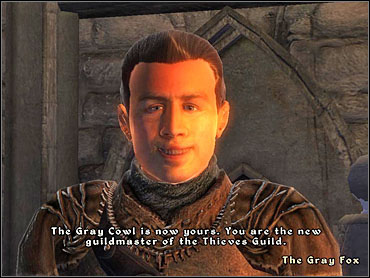 Dude, put that cowl back on.

When you're back to Fox, he'll have a last request for you. Take the ring from him and deliver it to Countess Umbranox in Anvil. You'll see a touching cutscene in which the mystery of the Gray Fox is finally solved. The Gray Fox, you say? You mean yourself, of course? Yup, from now on YOU are Cyrodiil's most wanted. Enjoy.

The most important reward you get from completing the Thieves Guild quests is the Gray Cowl of Nocturnal. It's something like a second, separate identity. When you wear it, city guards automatically start to pursue you, and you have a fine of 500 Gold on your head that you can't pay off. On the other hand, once you take off the cowl, you get rid of all the fines that you earned as the Gray Fox. That means that you can perform any evil deed, kill anyone, steal everything, and then just take the cowl off and you're cool with the guard.

The only exception to that rule is when the guards are actually on your tail. You first have to loose them somehow, then take off the cowl. 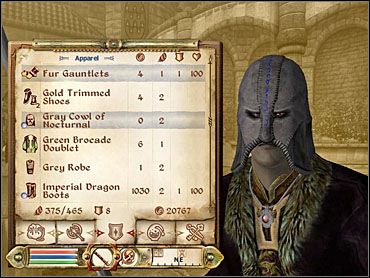 Apart from that, the cowl gives a +25 bonus to your Sneak ability, and also has some other perks like constant Detect Life and Fearther enchantments.