When asked for new assignments, Modryn will tell you to meet him in his house after dark. There, he'll tell you the story of Blackwood Company. Agree to help him investigate, and you'll meet him in the guild branch in Leyawiin. Talk to him and you'll both head to Ayleid ruins of Arpenia.

Arpenia is quite a big, empty dungeon. You won't encounter any monsters in there, except for the rats. Walk around the level to search through the whole map, then leave. It turns out you weren't supposed to find anything in there - Modryn will tell you that you both have to go to Atatar. Follow him there. A big, 3-level dungeon stands before you. 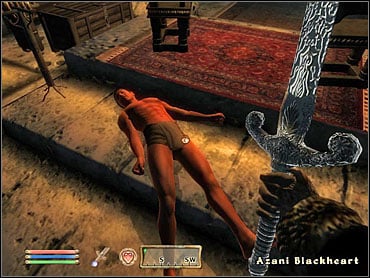 On the fourth level, you'll be caught in a boss fight with Azani Blackheart. Once he's dead, search his body, and take the ring (and some other cool items you find on him, including full Elfish armor and a great sword called Sinweaver) to give it back to your buddy Modryn. You'll be promoted to the rank of Warder.

Burz tells you to kill some fugitives that have been terrorizing Bravil. Go to that city and ask somebody about the bandits. When his disposition is at around 65, you'll know that they are hiding in Bloodmayne Cave.

The cave is divided into 2 levels, and there are 2 fugitives on each one. Save for them, you won't find anything of interest in there. When you kill them all, go back to the guild.

You have to go to Brittlerock Cave and help Elante to conduct her research there. It's a very simple task, just follow her around the cave and kill everything that threatens her (there are some Daedra in there). At the end of the cave, you'll find the shrine she was looking for, and you'll be free to leave. There is a second level of this cave, but you don't have to go there at all. Go to Azzan to receive your reward.

Trolls of the Forsaken Mine

Some guild members are lost in Forsaken Mine, south of Leyawiin. You'll find some bodies of both Guild and Blackwood warriors, and on the second level - the body of your colleague Viranus Donton. There's a journal nearby, pick it up. It turns out that the Blackwood Company attacked the Guild! Go back to Modryn to tell him the news.

Go to Lord Rugdumph's mansion and ask him about his missing daughter (listen to what he says, lol!). You'll get a new map marker indicating the daughter's whereabouts. She's being held hostage by some ogres. Kill them (there are three of them) and talk to her. Escort her back to the mansion, and you'll get a special reward - quite funny looking family sword of theirs. Inform gro-Khash of your success. 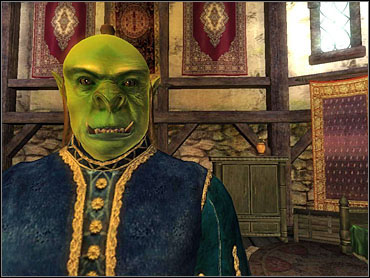 Go to Harlen's Watch, a settlement south of Cheydinhal. Enter the house of Drarana Thelis and talk to her. There have been some "light-sights" around the town. Go to the place the marked on your map to find out that the lights are in fact Will-o-the-wisps. Enter the Swampy Cave.

Inside the cave, you'll find a stack of human bones, apparently left by trolls. You have to clear both levels of the cave from these monsters. Once you're done, go back do Drarana. You'll get a Mind and Body Ring. That's it already, go back to the guild.