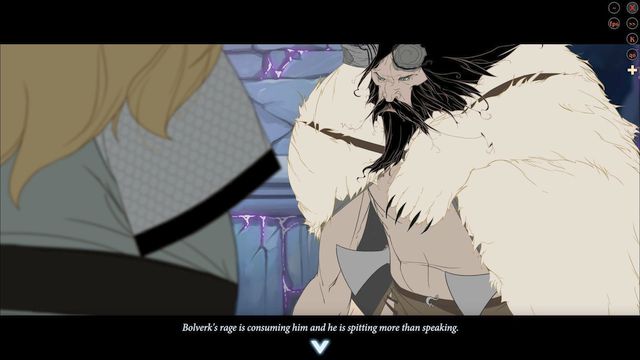 Chapter 15 is entirely devoted to the game's ending. You will have to make several choices here, but they will affect neither the following events, nor the game's ending. Either way, the game ends in the same way. The most important event here is the battle with Bolverk, and it is not too demanding. Below, you can find a full description of the battle, alongside several helpful hints. 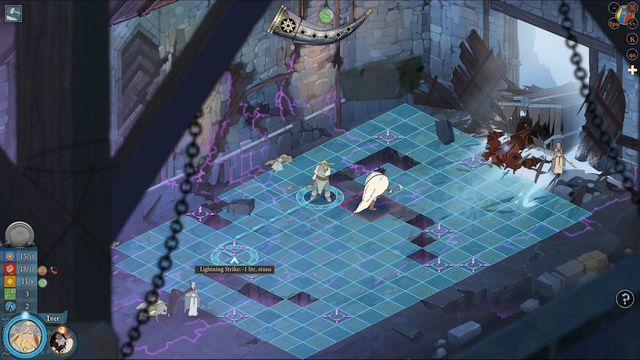 During two short cutscenes, you will witness Bolverk carrying the corpse of Bellower. You learn that Bolverk has been possessed and any dialogue option you pick ends up In a battle with him. The above screenshot presents the battle zone. Note that, during the battle, you can move freely round the entire battlefield, so you do not have to use up willpower. However, you notice that after 2-3 of Bolverk's turns, at the moment at which his wave starts to form lightning runes on the ground. Try to walk around those runes and approach Bolverk very carefully, especially if you have leveled him up.

Regardless of your approach, attack Bolverk's strength/health bar. Bolverk, at the highest level has quite a lot of health and additional bonuses connected with critical damage. The faster you deplete his health, the less damage you will be receiving. Therefore, use regular attacks with willpower bonus, in order to drain the portion of health in one blow. During the battle, you will also notice that Bolverk keeps regenerating his health, which may pose quite a problem. However, do not change your tactic when you notice that. Instead, try to interrupt his health regeneration. After you either win, or lose, you will see the game ending. Congratulations!

Note! The game ending does not change, regardless of whether you win or lose. Therefore, you can completely ignore the battle, if you want to see it.