Key moments during the journey 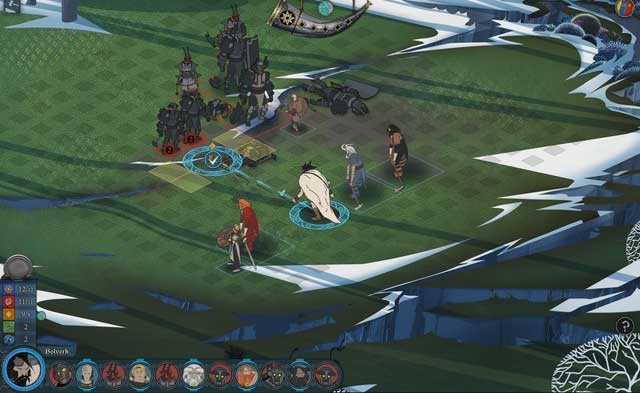 The battle in defense of Oli is a constant element

The first important event that takes place along your route is meeting Oli, a proficient axe thrower. Help him fight (it is up to you, if you wait, the hero will be unconscious during the battle). Thanks to this, you can include him in the caravan as a hero, after the battle. Adopt offensive tactic during the battle, your varls will effectively attack groups of several enemies. Also, the majority of your units will be able to reach your opponents already in the first turn. You should beware of Stoneguard Defender who attacks with his shields, knocks back everyone around and deals damage to armor (he does not always appear; sometimes he is replaced with regular Dredge Scourge). 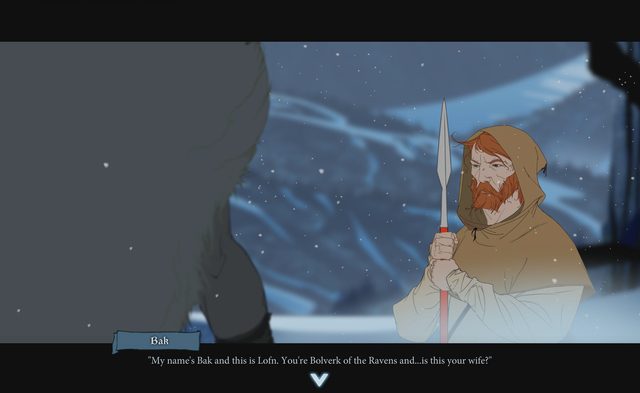 Also, you will always meet Bak. It is much better to accept him in, than kill him

You also have to take the next stop. You meet Bak, a hero that wants to join you. You can refuse, at which point you will have to fight him (five opponents; this rewards you with 10 renown points). After e joins you, you receive a playable hero, 84 clansmen, 80 warriors and 24 supplies. 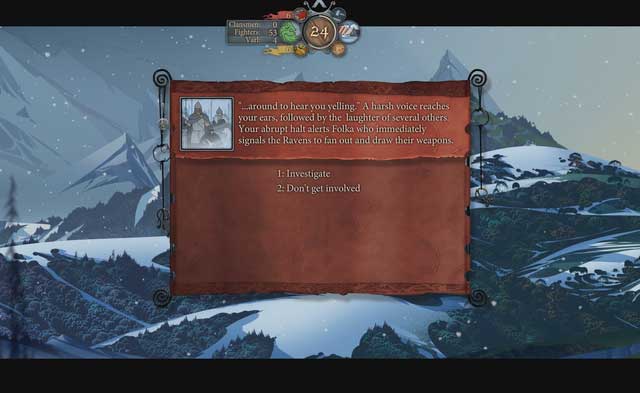 Another attempted robbery after a longer while ... You can take the risk though and you will lose nothing.

A bit further, you will hear a call for help. You can either Investigate it or not get involved. If you decide to look into the matter, you receive three options to choose from:

Woman named Sefa wants to join you. She is carrying one unit of supplies. Regardless of what you decide, she will join you after the fight anyway. If Sefa joins you, she will call in reinforcements at night and attack you. After you win the fight, you receive back your supplies and win a dozen-or-so renown points. 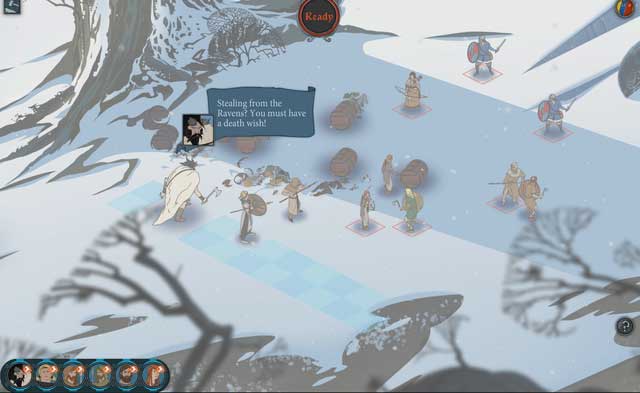 Sefa will call her men on you, if only you accepted her in your caravan

Right before you reach Bindal, if only you took Sefa along with her mercenaries, you will be assaulted. As a result, you will lose five fighters and you will have to fight an assortment of men. Try to eliminate the archer as quickly as possible and do not let the opponent form a wall (shielded fighters in the front row and archers in the back). For winning the battle, you will receive renown points and you will get the stolen goods back.

You can take some rest in the camp that you have set up and train your men, thanks to which you receive nearly 20 renown points.

Note - the order of below events does not always correspond to one specified here. Some of the events do not happen during a single playthrough and they crop up at random. 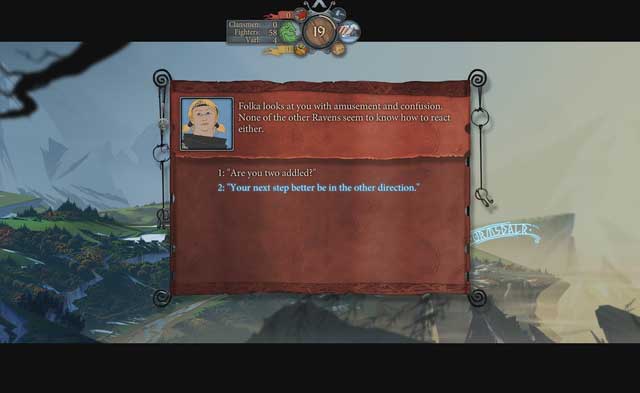 Two of the Varls are reluctant towards joining you, or they may simply making it to seem so, because they agree to your proposal

At some point, you encounter two quarreling Varls. The conversation is a longer one but it may yield positive results. As your first response, pick any of the remarks - positive or negative one. In your next option, you can attack them. However, you can also say: "I'm not sure what you're after, but we're not sharing food". After that, you can send them to hell (option 2) or accept them in your caravan (You can join if you'll shut up). They will join you, although they are not much of an asset... You can also kill them, as a result of which you receive Solvi's Method [+2 to ranged archer attack, -2 to armor - it knocks back enemy by 3 fields after his strength attack]. 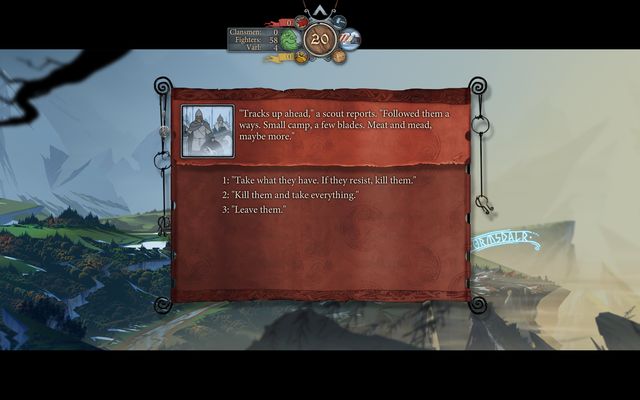 This small encampment may provide you with some supplies

The second optional event here is running into an encampment. You can either ignore it (Leave them), as a result of which you lose morale, or pick one of the two remaining options to attack the encampment. The first one of the two (Take what they have. If they resist, kill them) provides you with 5 renown points and 10 supplies. The other one (Kill then and take everything) provides you only with 10 supplies. 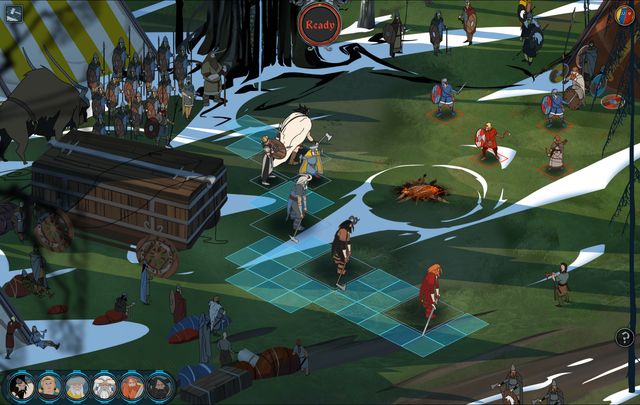 Do not fight with Mogun, there is no point in losing a hero

Regardless of your decisions, you will have to fight with Mogun, who will want to see what is inside the crate that you have been transporting. To resolve the matter amicably, pick the following options 2 (The cart stays closed), 2 (Take one more faen step forward and you die.), as well as 1 (Challenge me again and you're dead). Option 2 here (Letting you live would set a bad example) results in execution of Mogun, who is one of the heroes.

You can also pick option "Let's take a look", because you will be unable to pick the lock anyways and all will forget all about it. Options 1 and 3 (Get past me and it's all yours/Back away or I kill you in front of your friends.), as well as challenging him directly (2 followed by 1) end in a fight with Mogun and his followers from your party. Surprisingly, this is the best option to pick. After the battle, you can spare Mogun's life (option 2) and you will receive some renown points. 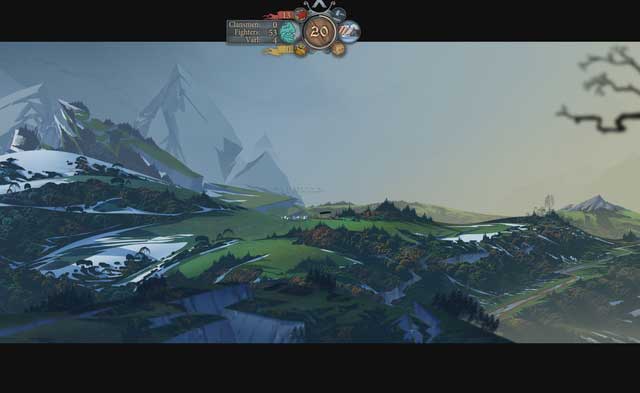 The camp with birds circling around it is bad news

Along your path, you will spot an encampment with birds circling above it. The village has been attacked. This is the only way of obtain some supplies that you must be running out of, at this point. There are three things you can do: 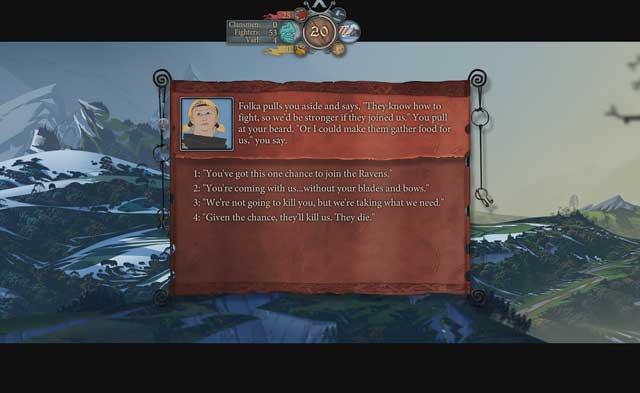 You will be fighting the settlers (after you pick options 2 and 3) armed with spears and bows. They will be trying to keep you at a distance - do not let them to. After the fight, you give the villagers a choice:

Regardless of your approach, the village will become your temporary camp and, what is important, you find a market here, if you are short of supplies. 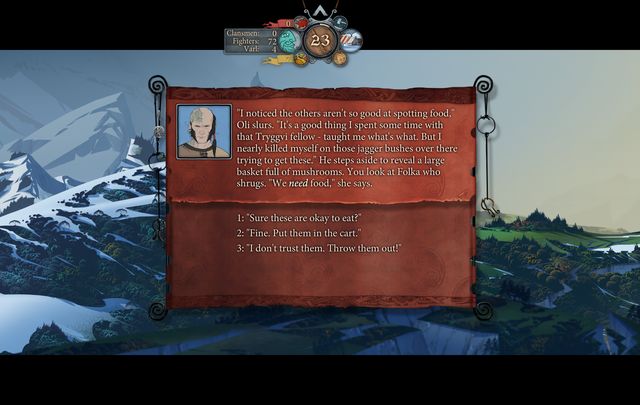 It is possible that Oli finds a way to get some food - he picks some mushrooms. If you do not trust him, throw them away (I don't trust them. Throw them out!). The remaining two options are about taking the mushrooms (8 supplies). 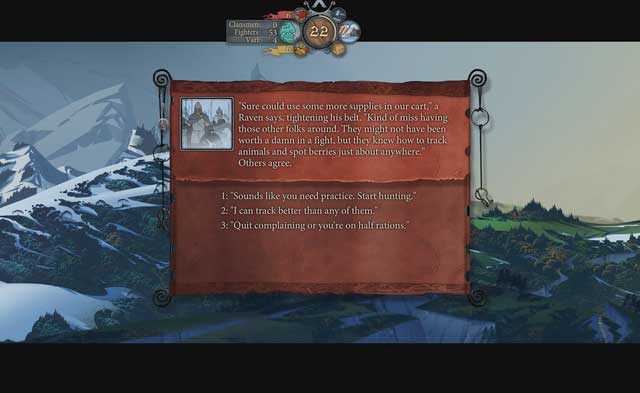 Soon after you leave the village, you get another opportunity to get some food (optional event). Choose wisely: 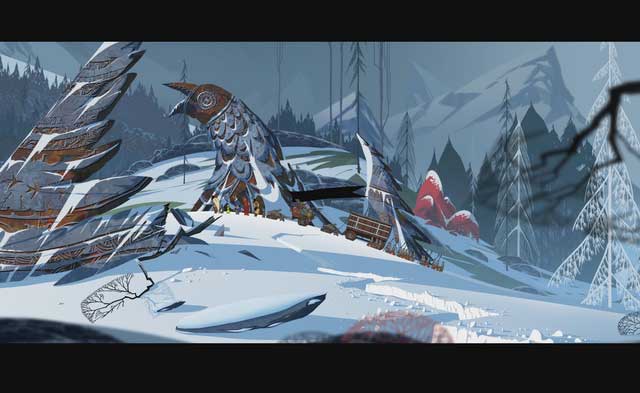 The second stone monument with an artifact inside

On the top of the hill, you find a "temple" in the shape of a bird. As always, it is a good idea to examine it to find some valuable artifacts (and you also receive an increase to morale after you find them). There are three options available here:

Do not set up a camp here, because your people will want to make a stop after you come down from the hill. In training tent, you can obtain nearly 20 renown points.